Glentoran's Irish Cup defence is over after a 1-nil defeat at the Oval tonight. The Glens went with the same XI that started last Saturday's win over Cliftonville but tonight they just couldn't get that vital breakthrough and exited the competition. 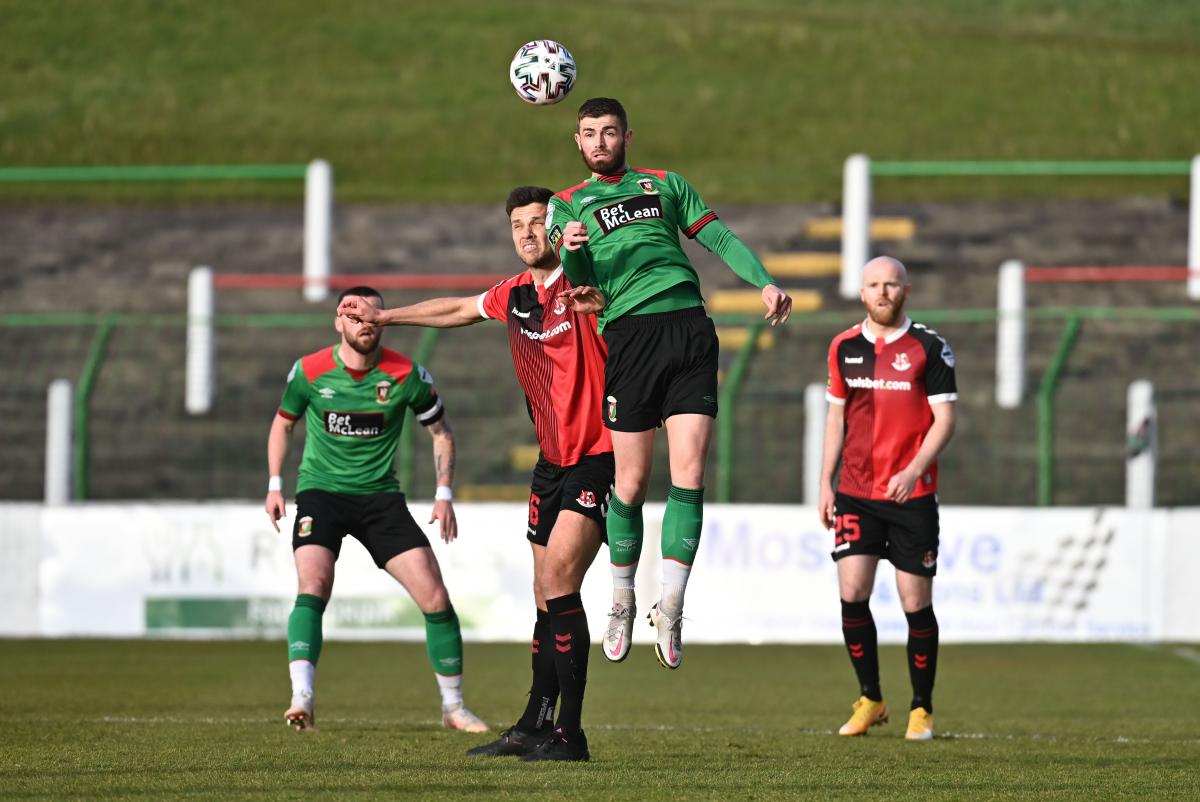 It might have been very different had Jamie McDonagh's 3rd minute effort hit the back of the net instead of the Crusaders crossbar but the visitors went ahead with just 9 minutes played and kept their advantage to book a place in the semi-final. 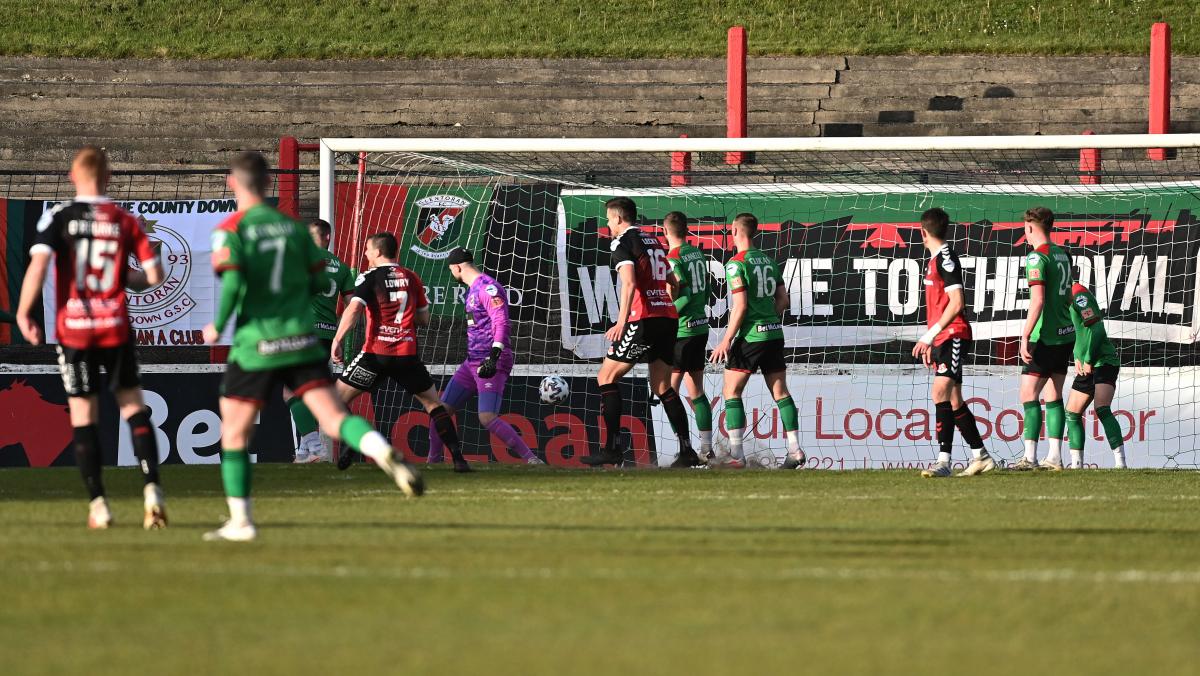 The Crusaders goal came from a corner taken by Ben Kennedy. He played the ball to the back post where Billy-Joe Burns met it and headed into the bottom corner. Kennedy then did well to go past a couple of Glens defenders in the area on 14 minutes but went down very easily looking for a penalty; the referee ignoring the visitors' claims. Midway through the half Crusaders almost doubled their advantage. Another set piece played into the danger area and this time it was Jordan Forsythe who got on the end of it, his header hitting the inside of the post before being hacked off the line. On 24 minutes Crusaders were awarded a free kick 30 yards from goal. The shot struck the wall on the edge of the box, referee McNabb feeling that it had struck Gael Bigirimana on the hand. The Glentoran midfielder was booked and the free kick moved forward to 20 yards. Ross clarke struck it but his curling shot went inches wide of the post. 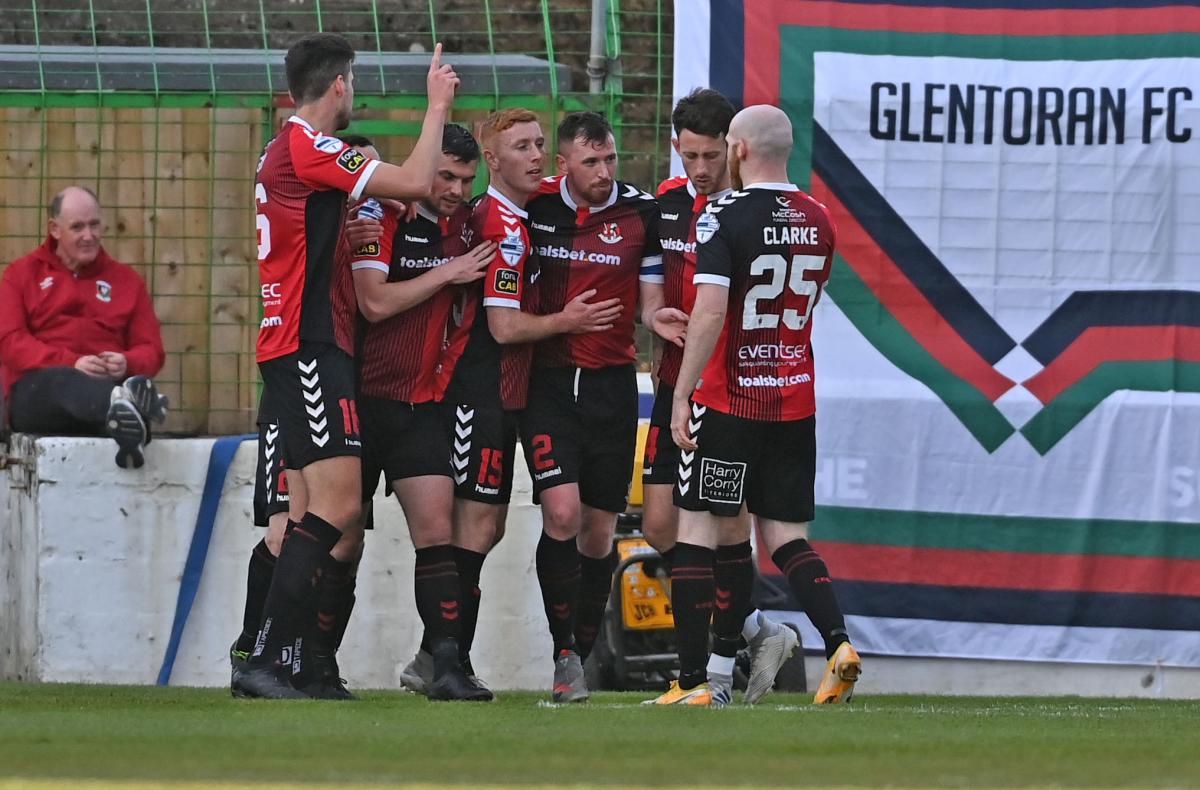 As halftime approached Glentoran pushed forward and Seanan Clucas put a cross into the box from the right side, looking for the Donnelly brothers but it was too close to goalkeeper Tuffey. A succession of corners for Glentoran on 42 minutes ended when the ball was only partially cleared. It fell to Jamie McDonagh on the edge of the box but his effort was well off target. 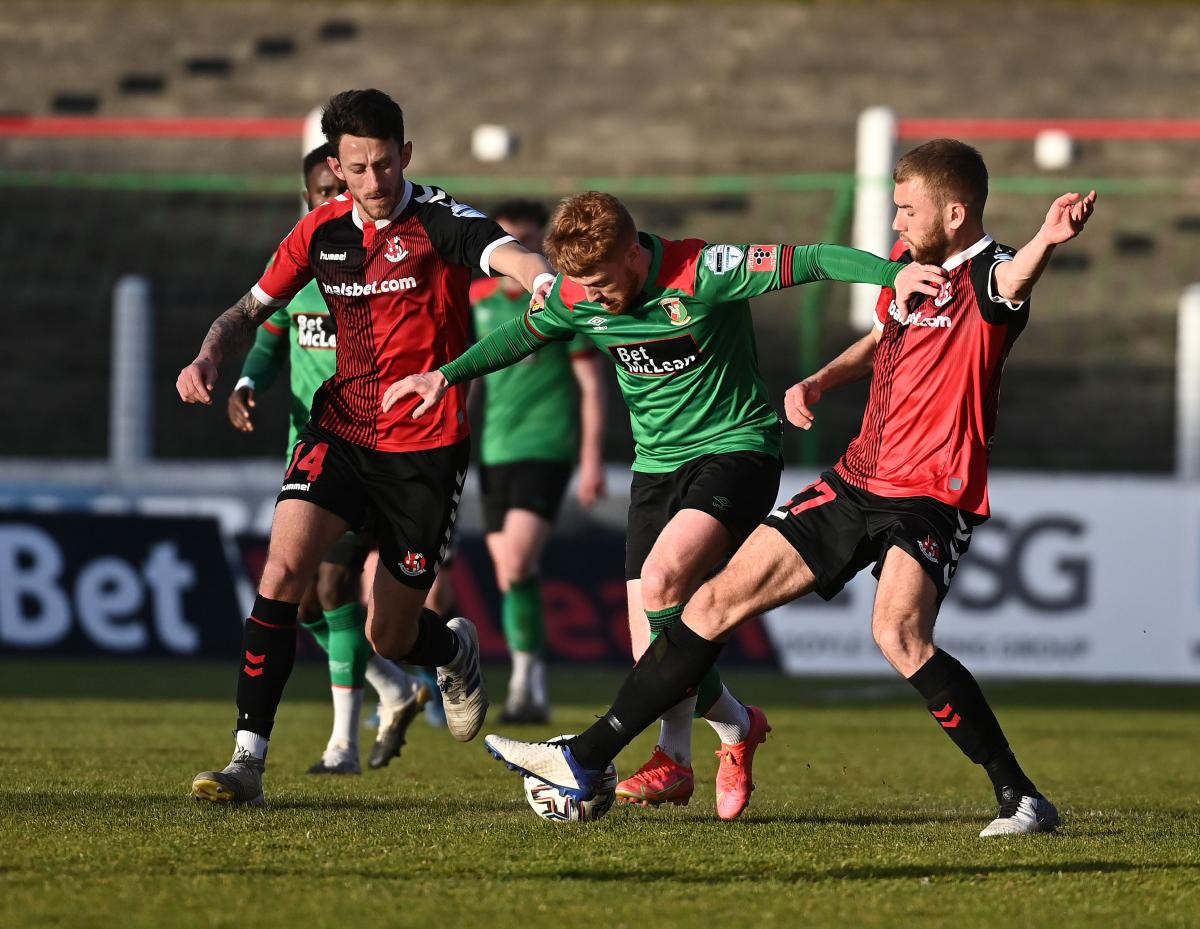 Glentoran were more adventurous afther the interval but still couldn't find that elusive equaliser. Crusaders were still looking dangerous on the break though and went close with another Ross Clarke free kick on 55 minutes. Just before the hour mark a Dale Gorman free kick, from midway inside the Crues half, was played into the box. Nobody attacked the ball but it took a high bounce on the dry goalmouth and almost caught out Tuffey, the Crusaders' keeper tipping the ball over the bar for a corner. A minute later a great run and through ball from Rhys Marshall, Glentoran's best player on the night, found rory Donnelly. He slipped it past Tuffey but turned to see the linesman's flag raised for offside. 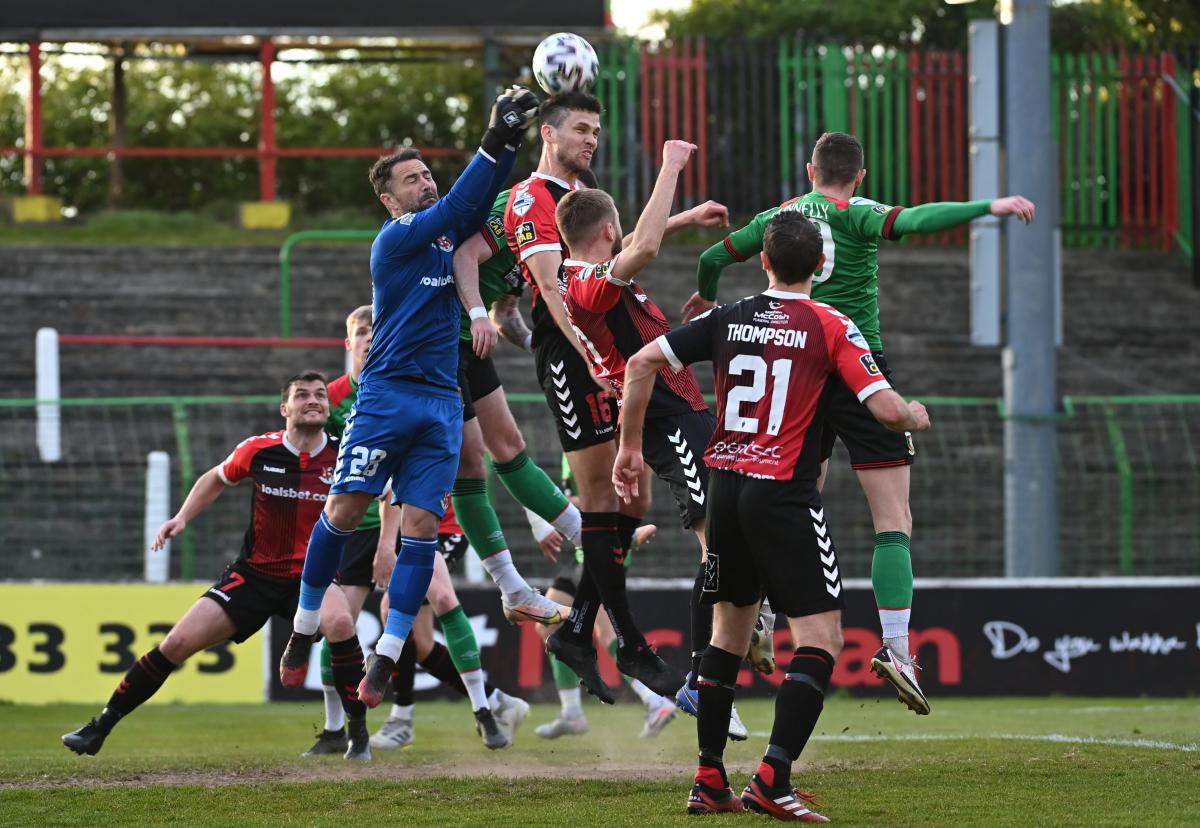 Mick McDermott then made a double substitution to try and force a leveller; Seanan Clucas and Jamie McDonagh being replaced by Ciaran O'Connor and Conor McMenamin. It was the Crues though who almost scored again a minute later. Ross Clarke had two efforts blocked by Caolan Marron and when the third attempt came in it was headed out by Luke McCullough. The visitors then appealed for a penalty, claiming the ball had struck McCullough's hand but referee McNabb was having none of it. Glentoran's best chance to make it 1-all came on 69 minutes. A deep cross from Paddy McClean on the left was headed back across goal by substitute Conor McMenamin. Rory Donnelly met it but his header went just over the bar. 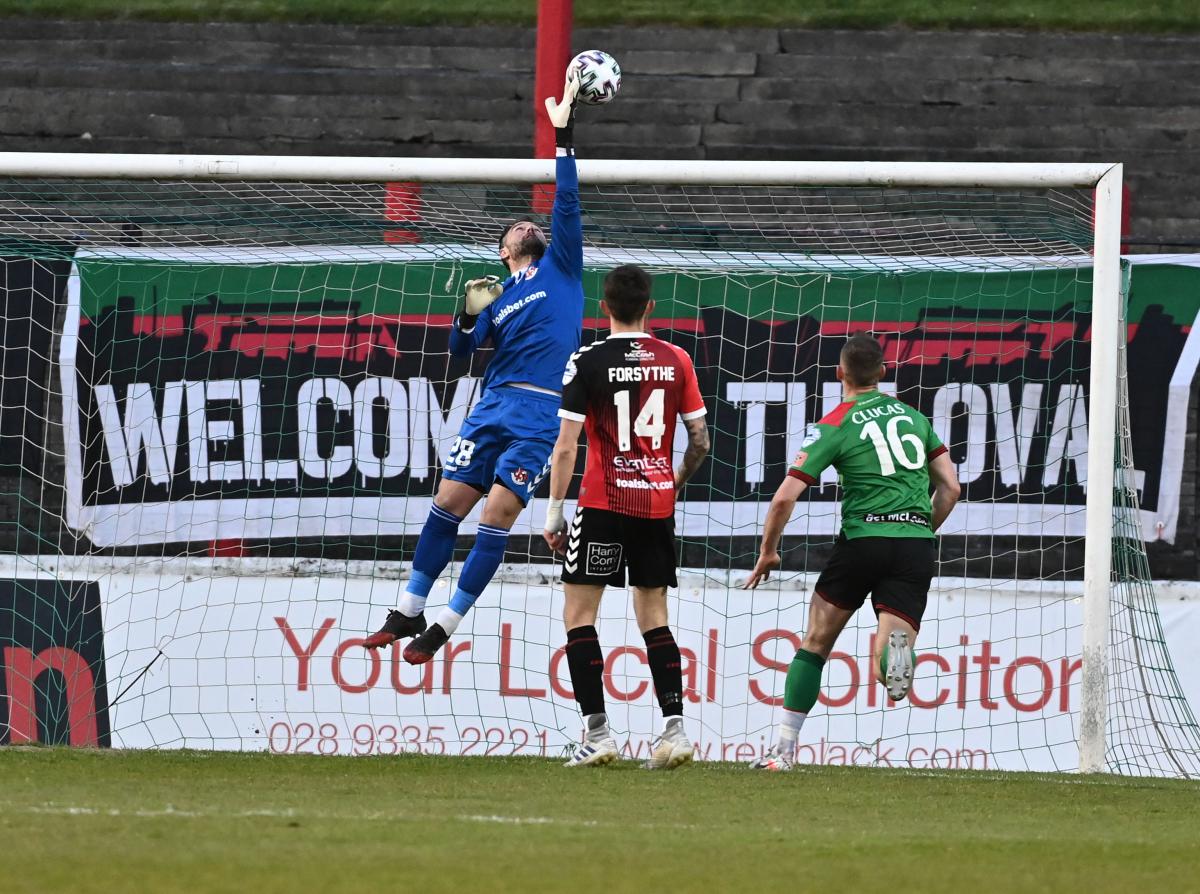 71 minutes and a break from Conor McMenamin saw him drive from just inside the Crusaders by-line where he went down under a challenge but nothing was given. The visitors should have killed the game off a minute later when a cross from Heatley went unchallenged and Kennedy was left with a free header in the 6-yard box. Perhaps surprised at the opportunity his header wasn't great and Rory Brown was able to turn it over the crossbar. The corner presented Crusaders with a further chance which was hacked off the goal line by Ciaran O'Connor. As we entered the final 10 minutes Jay Donnelly was unlucky with a goalbound shot which took a slight deflection and went narrowly wide. The corner was cleared with the ball eventuallly coming to Ciaran O'Connor. He drove a powerful shot goalwards but it was well kept out by Tuffey. Andrew Mitchell was introduced as the Glens threw everything forward but the goal never materialised and it is Crusaders who will face Larne in the semi-final. 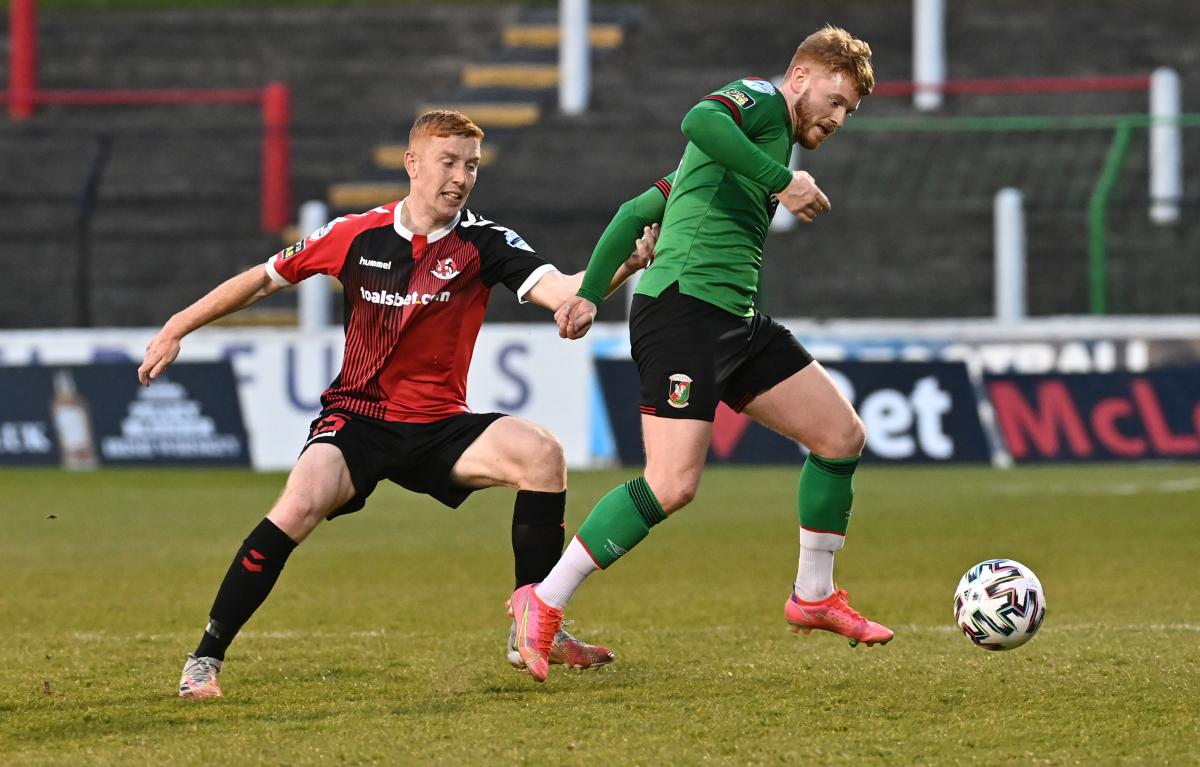 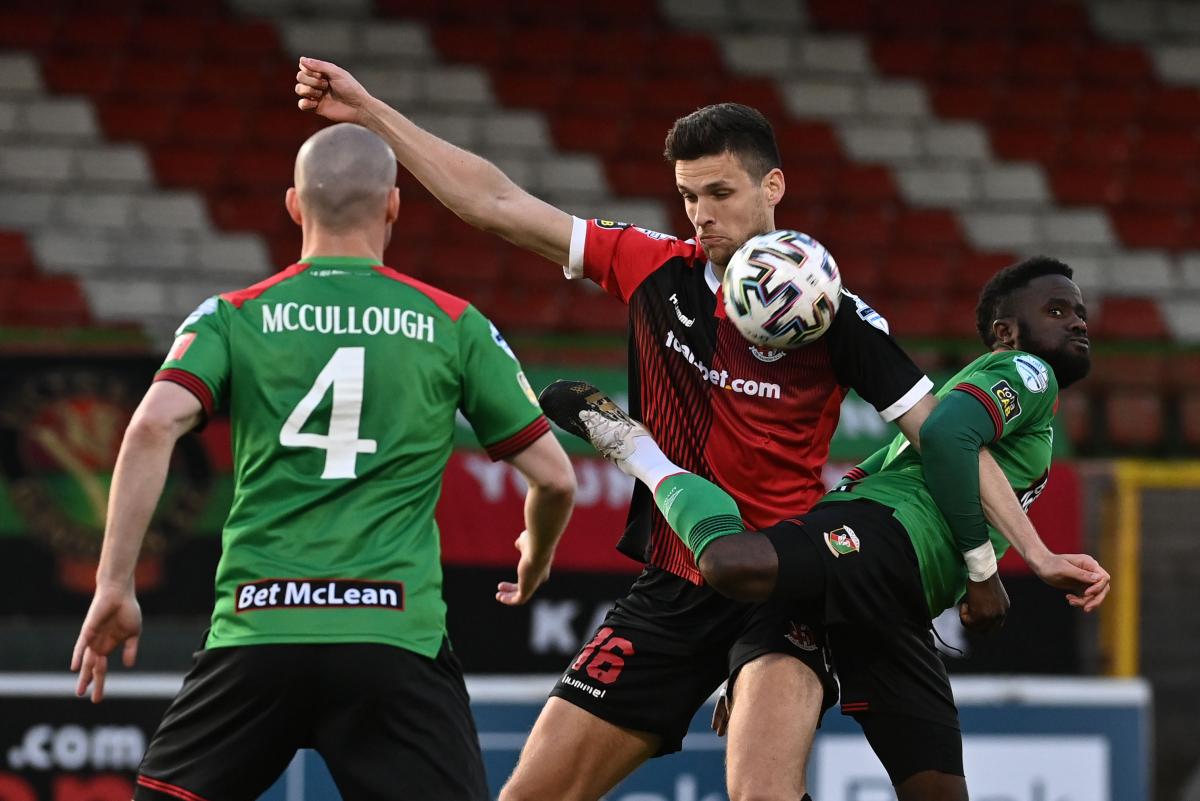