It was stalemate at the Oval this afternoon with chances few and far between as the Danske Bank Premiership's top two met. 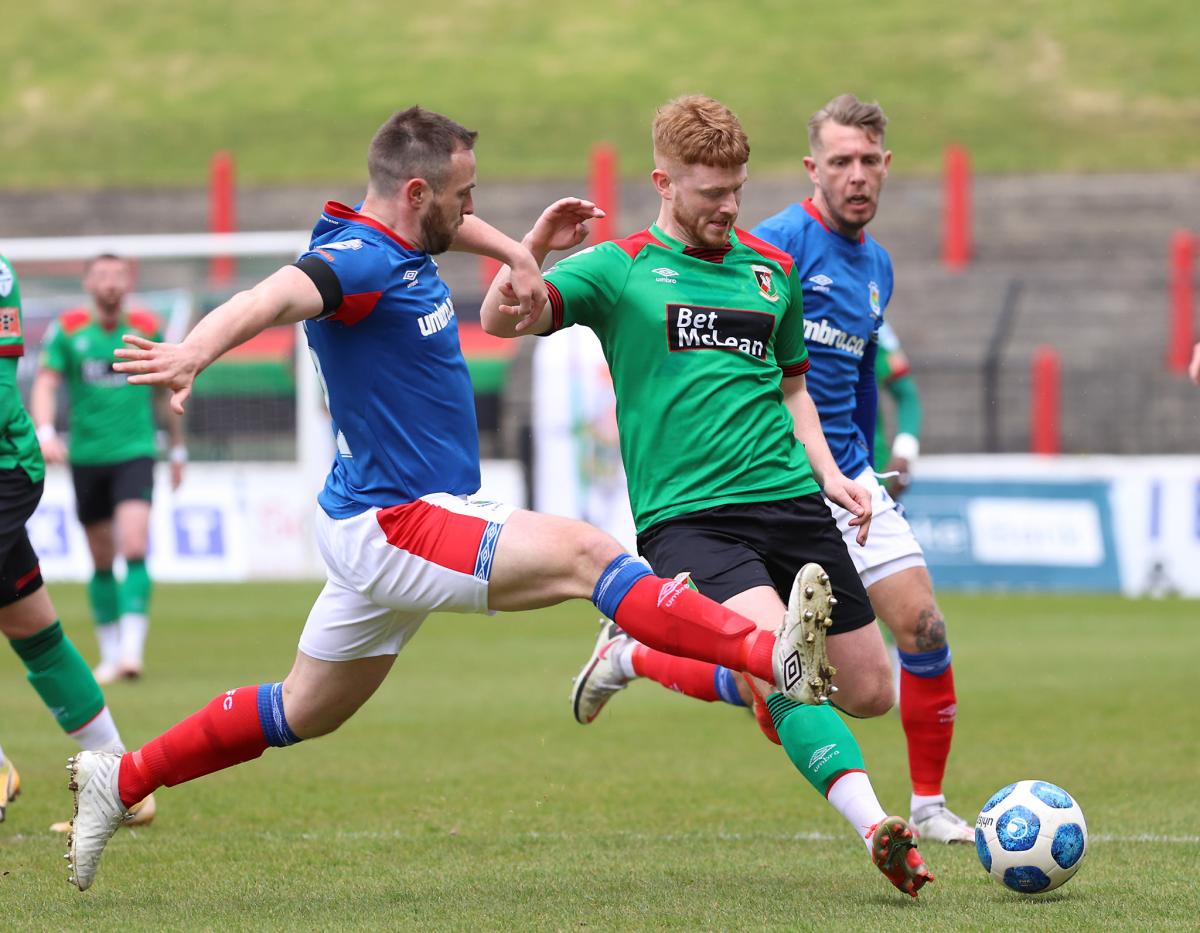 Glentoran made just one change to their previous starting line up, Dale Gorman coming into the midfield in place of Chris Gallagher.

Both sides went close early on with Mark Stafford meeting a first minute corner but heading wide. Stafford then conceded possession at the other end and Jay Donnelly pounced on the ball, creating room for a shot and firing towards the bottom corner but Chris Johns managed to turn the ball around the post for a corner. The game then stagnated somewhat with few, if any, chances being created by either side. Linfield looked dangerous on 17 minutes with a Joel Cooper cross from the left heading into the 6-yard box but an excellent diving header from Paddy McClean ended that attack. A couple of minutes later Shane Lavery had a decent chance but he fluffed his shot and it went well off target. 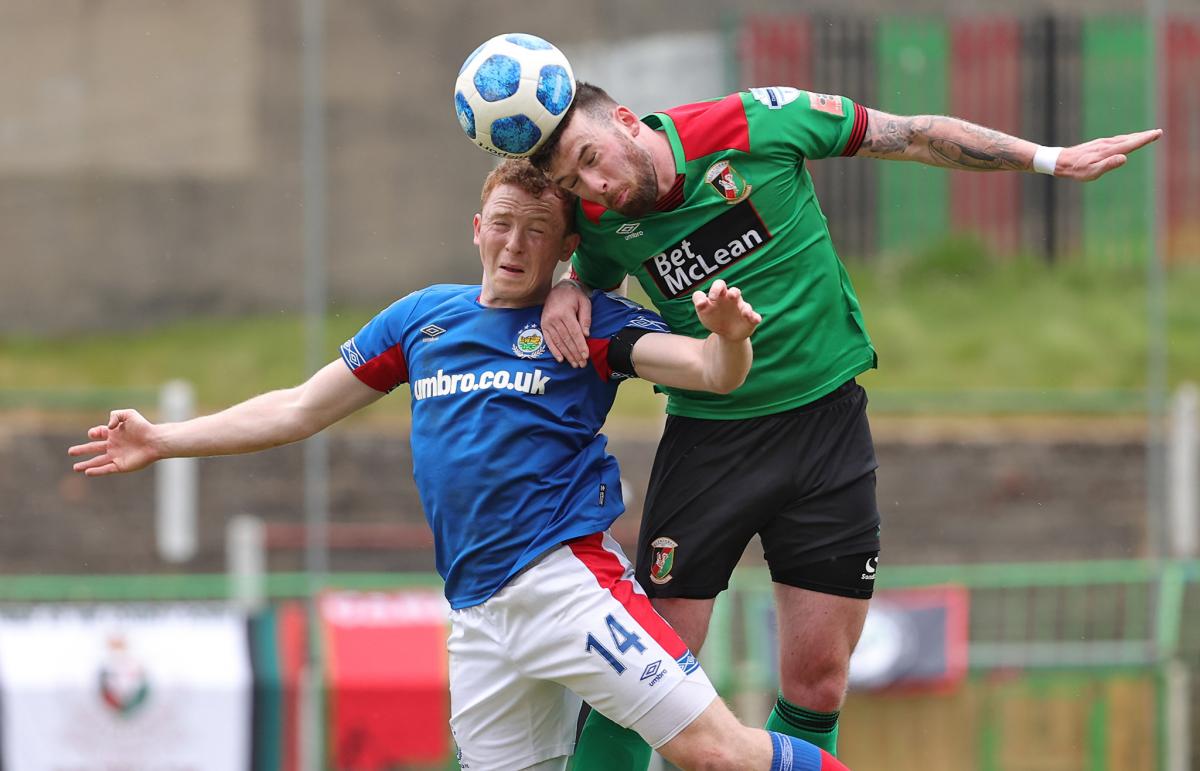 5 minutes from halftime Jordan Stewart found Kirk Millar in the Glentoran area but the imperious Luke McCullough blocked his shot. Glentoran had a free kick opportunity on 42 minutes. Dale Gorman struck the ball powerfully but it struck Stephen Fallon and was then cleared. The final chance of a disappointing first half fell to the visitors with Lavery firing towards the Sydenham End goal but Rory Brown got down well to make the save. 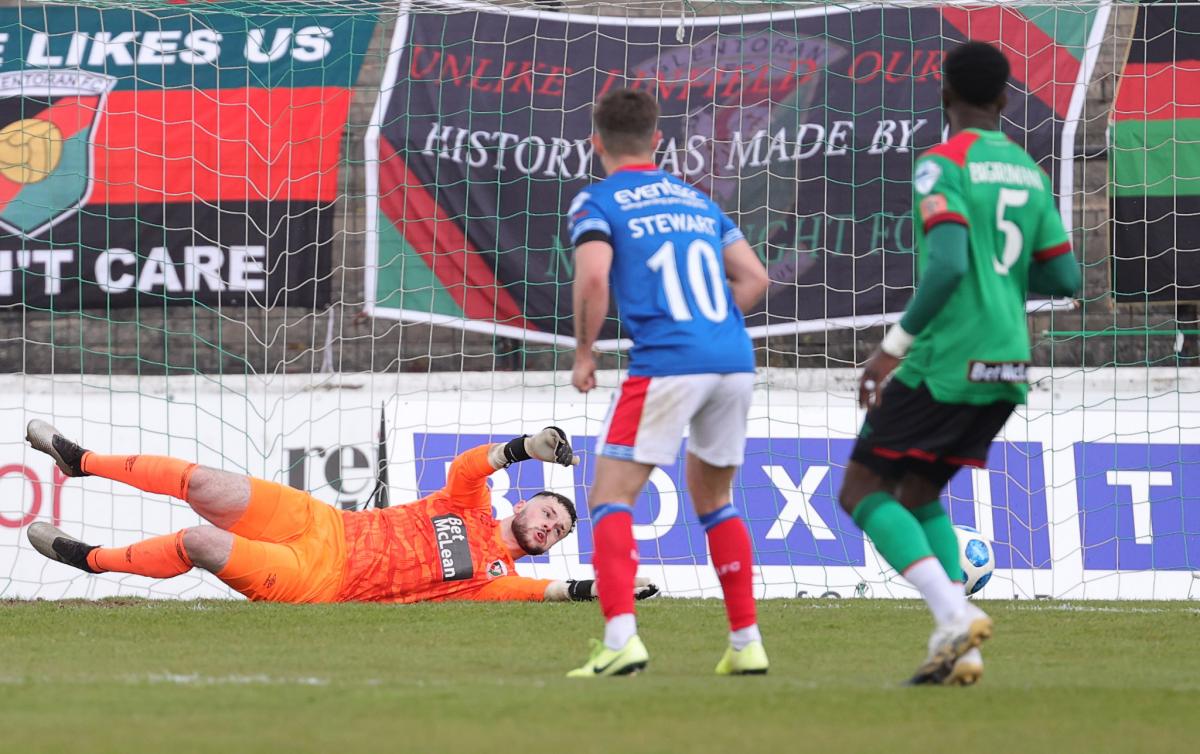 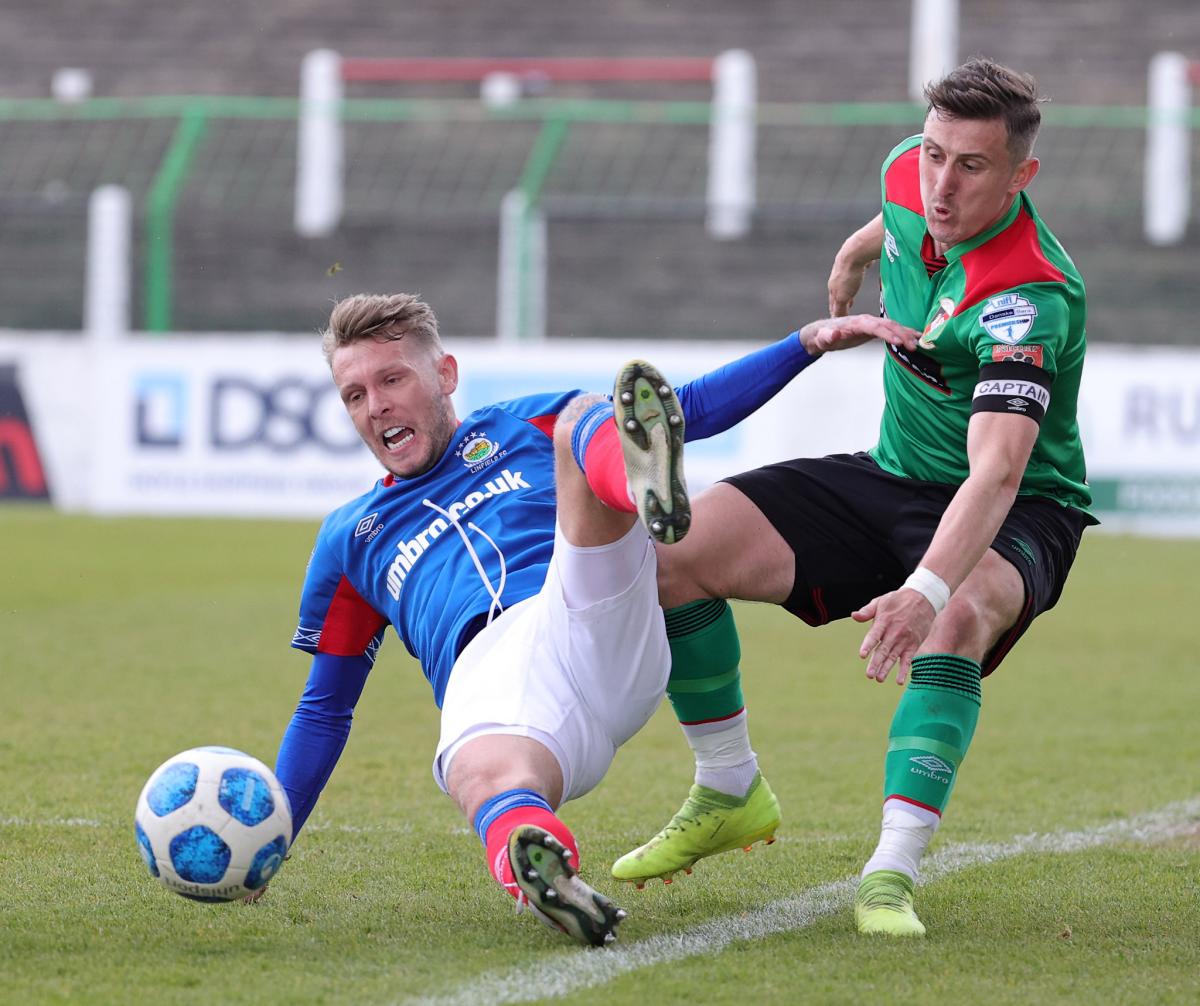 Linfield were awarded a free kick 10 minutes after the interval. The ball was played to the back post but Stafford's looping header was easily claimed by Rory Brown. Just before the hour mark another powerfully struck free kick from Dale Gorman was deflected behind for a corner. Gorman swung the corner in from the left and the ball almost crept in at the far post but unfortunately went inches wide. Midway through the half the Glens were dealt a blow when skipper Marcus Kane, was forced off with an injury. That meant a reshuffle at the back with Rhys Marshall dropping to right-back, Caolan Marron partnering Luke McCullough in the centre of defence and Paddy McClean moving to Kane's left-back slot. Ciaran O'Connor came off the bench and went into midfield. 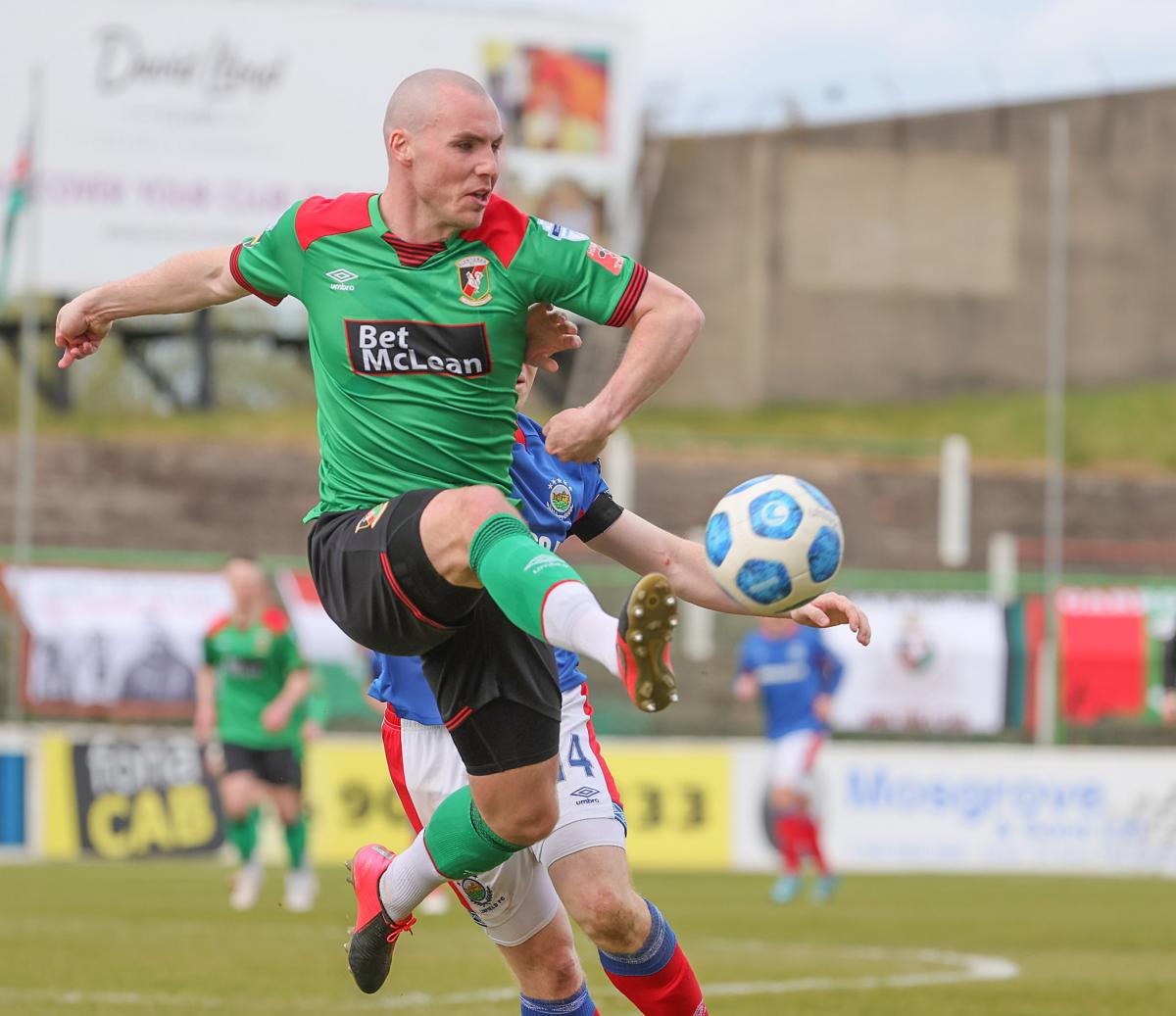 Rhys Marshall tried his luck on 69 minutes with a curling shot from the edge of the area but Johns was equal to it. 5 minutes later the Glens had a great chance to go in front when they caught Linfield on the break with Jay Donnelly in possession and Robbie McDaid supporting. Donnelly tried to cut the ball back for McDaid but overhit the pass and the opportunity was gone. With 12 minutes remaining and the Glens pressing for a winner Gael Bigirimana struck a shot from 20-yards. The ball deflected off the outstretched arms of Jimmy Callacher and the home side had a penalty. Robbie McDaid stepped up but saw his penalty saved by Chris Johns. 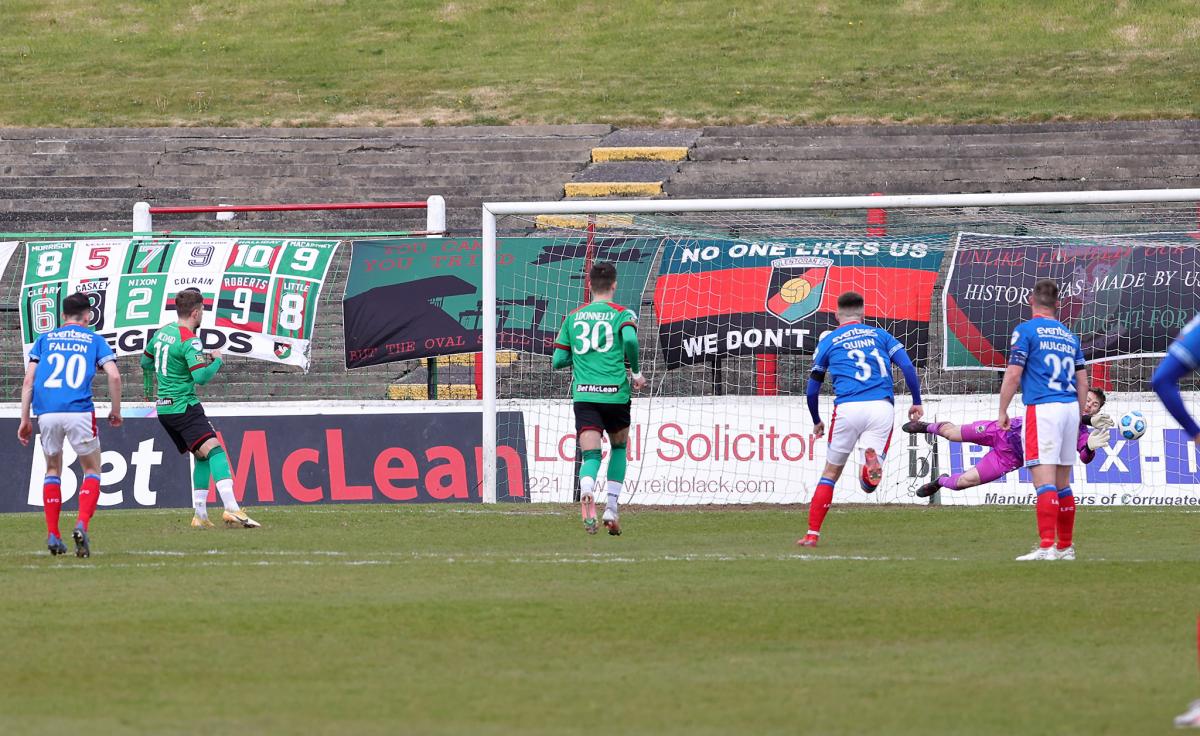 Linfield then ahd a late chance when Bigirimana was penalised for what looked an excellent tackle of substitute, Christy Mazinga. Mazinga too the free kick himself but fired over the bar. With 3 of the 4 added minutes played the Glens were awarded a free kick midway inside the Linfield half. One final chance to snatch a winner. With everyone up in the visitors' penalty area Bigirimana opted to play the ball short, possession was lost and Linfield had the opportunity to break in numbers with the Glentoran defence out of position. Caolan Marron did well to slow the attack but when the ball came into the area it looked like substitute Waterworth was going to win the game for the Blues but his headed was superbly cleared off the line by Rhys Marshall. 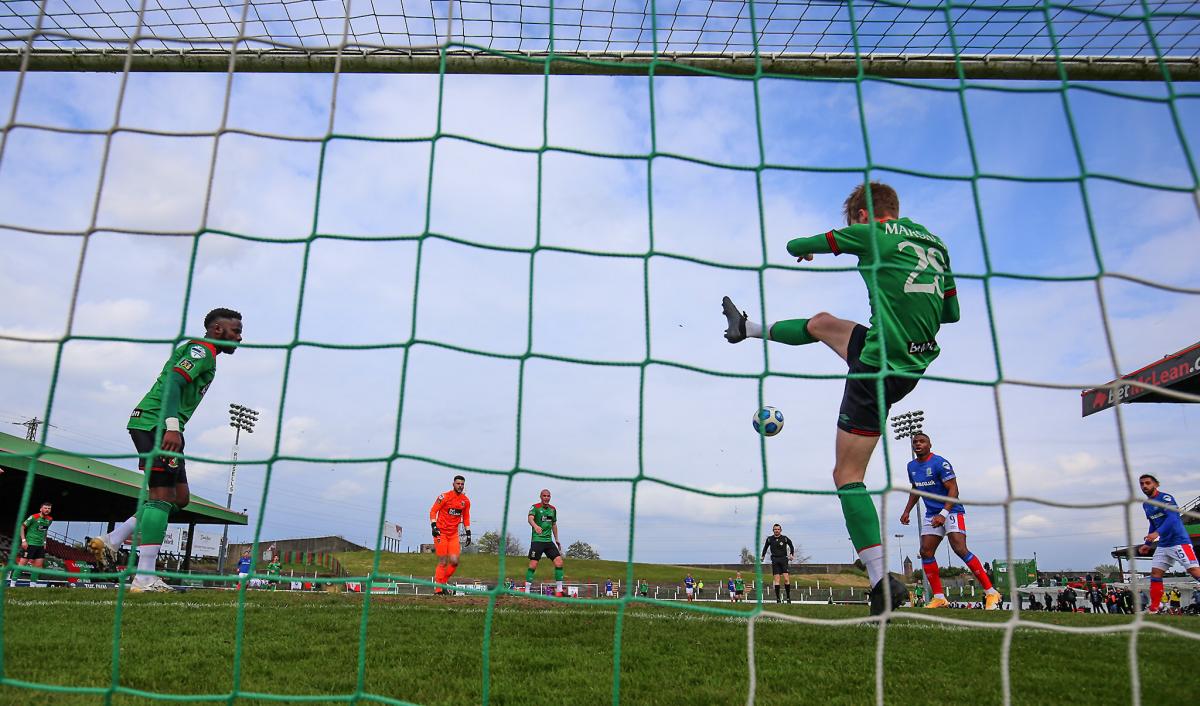 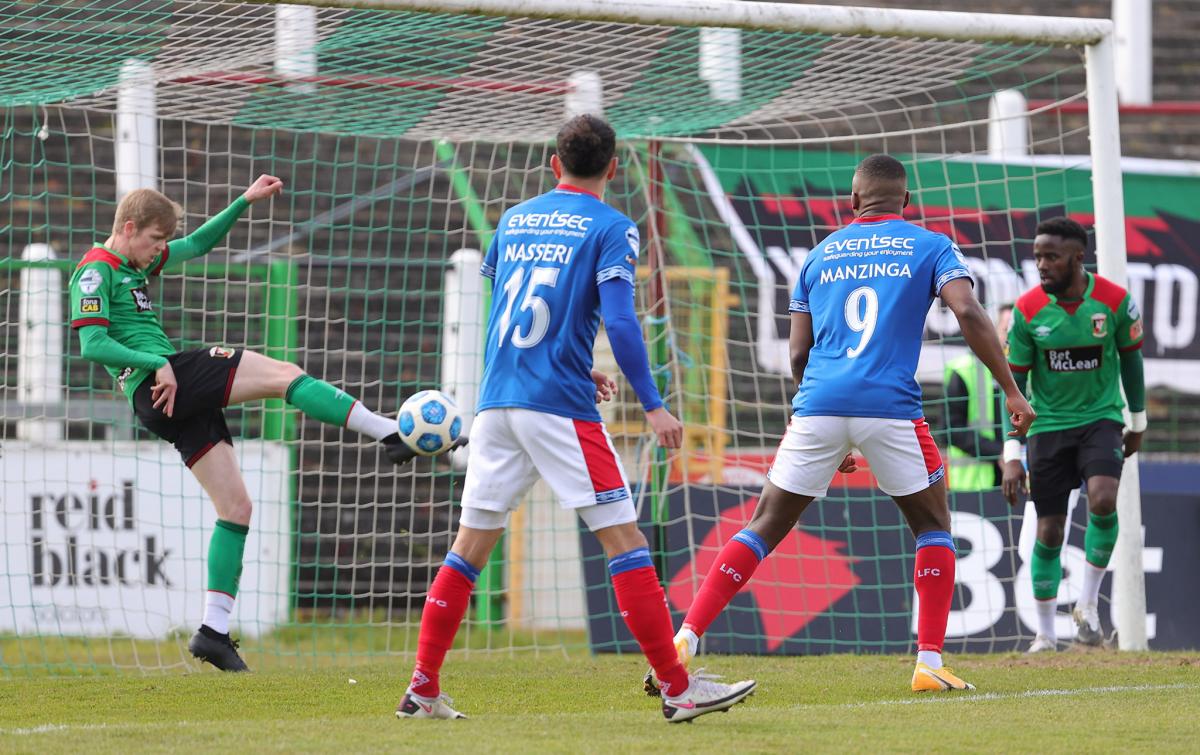 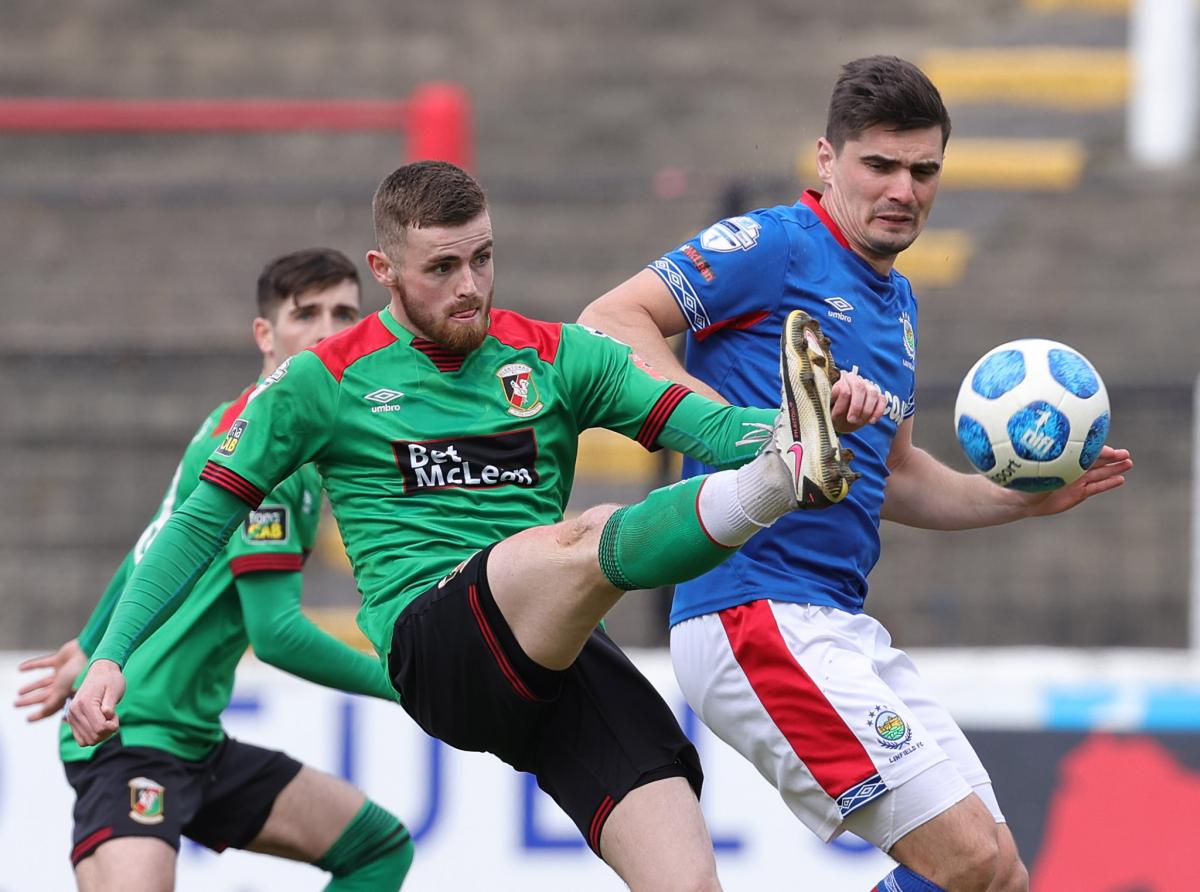