Glentoran's hopes of securing European football suffered a serious setback as title-chasing Cliftonville wasted a hatful of chances at the Oval on Saturday, with the game ending scoreless. 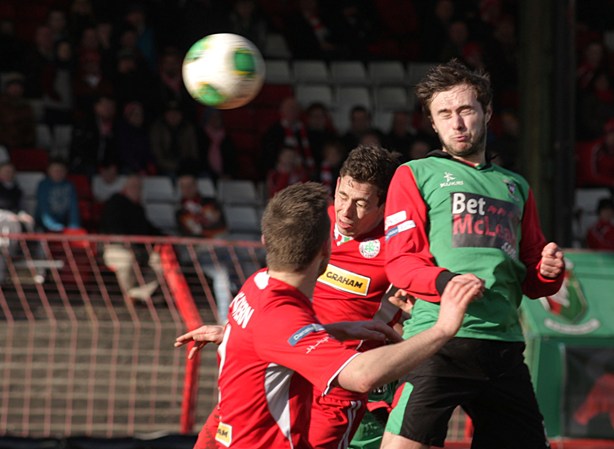 The weather changed numerous times throughout the day, with warm sunshine being replaced by fierce showers and vice versa. The game kicked off and sure enough it was the home side who started brightest, forcing a couple of early corners without truly testing Reds' 'keeper Conor Devlin. With ten minutes played though it was the north Belfast side who could've and possibly should've went in front. Liam Boyce played in strike partner Joe Gormley and the former amateur league striker raced through on goal but, under pressure from Willie Garrett and Elliott Morris, fired his effort over - the ball just grazing the crossbar.

This set the tone for the remainder of the half if truth be told, with Boyce firing a free kick straight into Elliott Morris' hands on 17 minutes and then Chris Curran fizzing a ferocious effort into the bottom corner - only for the referee to correctly rule it out as the former Ballinamallard United winger had handled the ball earlier in the attack. The Reds 56-goal strike partnership was causing Glentoran's defence all sorts of problems and just before the half-hour mark Boyce raced through after Jay Magee slipped but Morris produced the first of a number of sublime stops in an inspired performance; the Glens' captain smothering low at the former Werder Bremen forwards' feet. 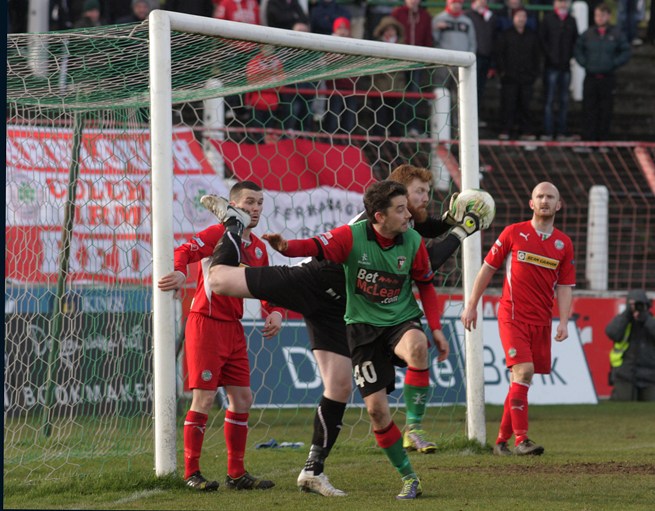 The home side were now well and truly under the cosh as Cliftonville dominated proceedings. Indeed, Boyce had another effort on goal with half an hour gone but his powerful shot slammed the crossbar, bounced down and was eventually cleared. The away support was celebrating as they believed the ball had crossed the line, though the linesman disagreed and the match remained goalless. Soon enough the woodwork would come to Devlin's rescue as Curtis Allen's cheeky chip had him beaten but the ball bounced back off the frame of the goal.

The first half belonged to Cliftonville, and with Linfield level in Coleraine Tommy Breslin's men had the opportunity to close the gap at the top. Glentoran also had reason to push for a winner with both Crusaders and Portadown comfortably winning in their respective games. Indeed, the second period was a much more even affair with the east Belfast men perhaps shading it.

Just two minutes into the half and the Reds probably should've went in front as Gormley again ran clear of the defence but uncharacteristcally blasted his effort high and wide when it was arguably easier to score. The home side had their own chance shortly after to take the lead as Allen produced a pinpoint cross to Jim O'Hanlon's head but the winger glanced his effort agonisingly wide. Glentoran were now on top as they forced a couple of free-kicks and played some decent football without really troubling Devlin; perhaps the best chance of this spell coming from Allen who, after some fantastic footwork on the wing, met Jordan Stewart's cross but flicked his header wide. 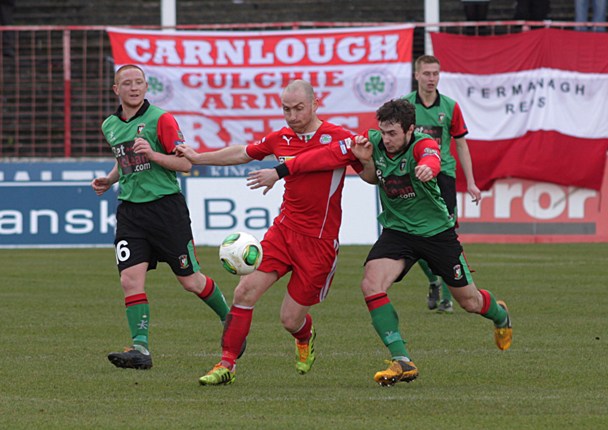 The game was now end-to-end with both teams pressing for a winner; Glentoran's best chance coming when a corner found Willie Garrett after some pinball in the box but the defender panicked and skied his effort from six yards, and then on 84 minutes Stephen Garrett flashed a low shot straight across the face of Morris' goal but nobody was there to convert. A minute later and the Reds had another opportunity with a free-kick in a very dangerous area. Boyce rolled the ball to Gormley but the attacker sliced his shot and saw it sail harmlessly wide.

With just a couple of minutes remaining Jim O'Hanlon won a free-kick twenty-five yards from goal. Stephen McAlorum, who was voted Man of The Match, stepped up and curled a magnificent effort goalwards. The ball clipped the wall on the way over and for all of the world looked to be looping to nestle in the top corner as Devlin was nowhere near it but to the dismay of the home support it sailed inches wide.

The game petered out and now the Glens sit eight points off Portadown in third, meaning Eddie Patterson's men have a mountain to climb if they are to salvage third and Europa League football in the summer. Next up is a short hop to Seaview on Tuesday night and that game really is a must win if that dream is to be realised. 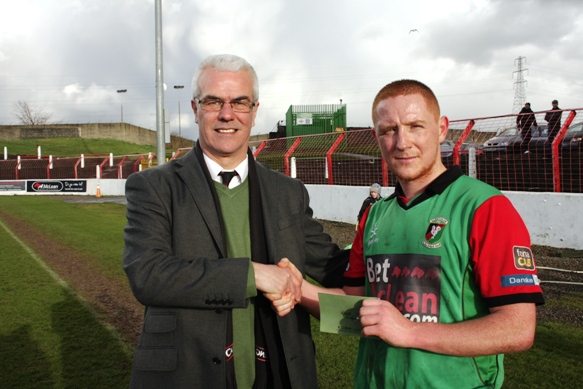