It was a tale of two keepers tonight as the Glens collected their second trophy in four days to keep on track for a second clean sweep in succession. Glentoran’s Ashleigh McKinnon for two crucial saves in the penalty shootout, and Crusaders’’ Maddy Harvey-Clifford for a string of outstanding saves throughout a game in which the Glens were dominant that earned her a very deserved [Player of the Match award in a game with no shortage of candidates.

The Glens were dominant from the start with the first real effort on goal coming on eleven minutes when a great take and run from midfield anchor Chloe McCarron led to a great ball across the box that neither the lively Joely Andrews or top scorer Kerry Beattie were able to convert. This was followed a few minutes later by another great run and pass by McCarron that brought a decent long-range effort from Wednesday night’s four goal star Lauren Wade that brought the first of the evening’s heroics from Harvey-Clifford then a shot just wide from Crusaders’ Hollie Johnston, their first threat of the evening. 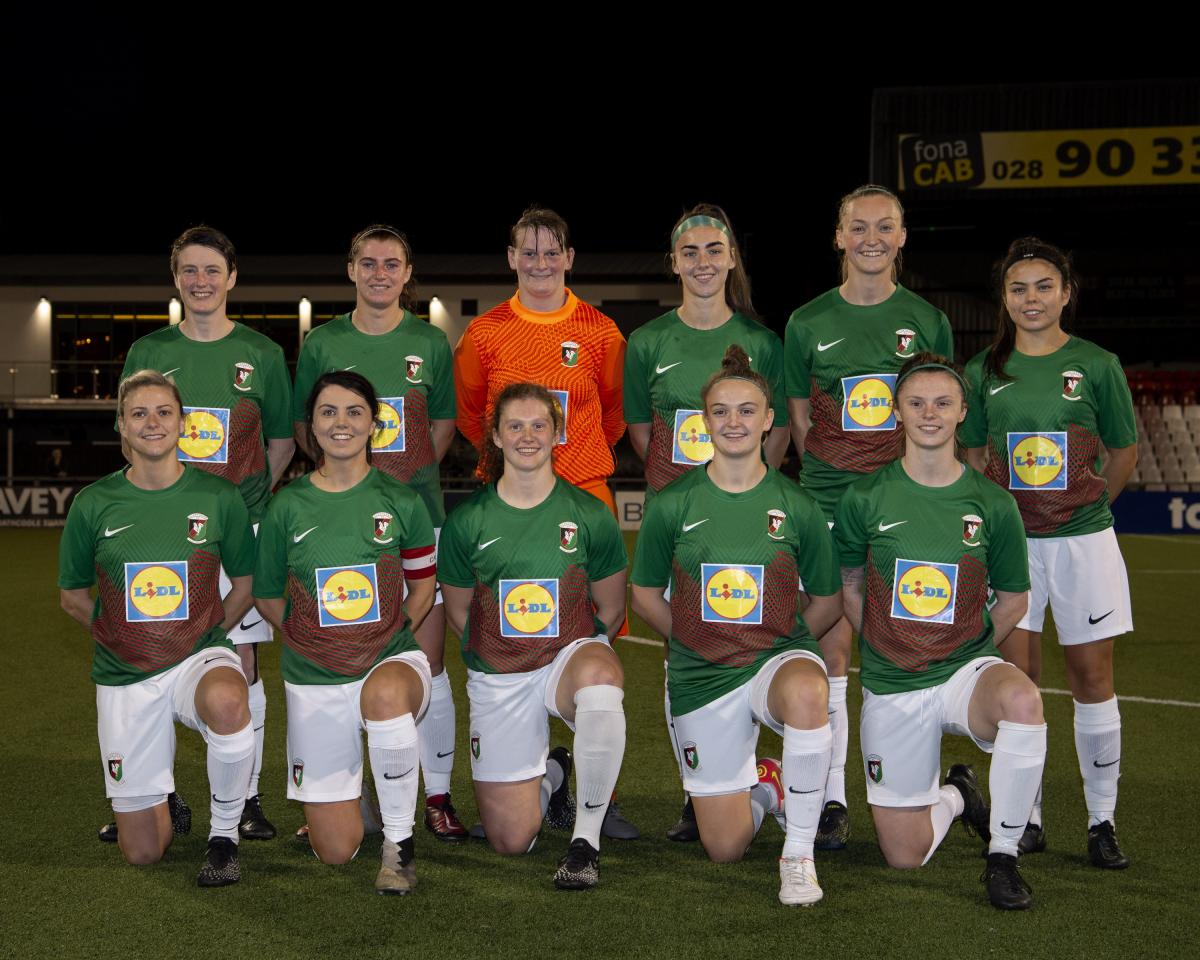 Glentoran took a deserved lead on nineteen minutes and no surprise to report the scorer. After a pass from Andrews Kerry Beattie beat the keeper well with a great shot from the left-hand side of the box. No more than was deserved at that stage.

The Glens continued to dominate the play without creating many clear-cut chances apart from another great run and pass by McCarron that brought a great shot just wide from Wade on forty minutes.

The half ended with a sucker punch equaliser from the Crues that sent the sides in level at the break. A disputed free kick from the left was met relatively unchallenged by Northern Ireland’s record cap holder Julie Nelson whose decisive header gave McKinnon no chance in the Glens goal. There was no time to restart play before the break. 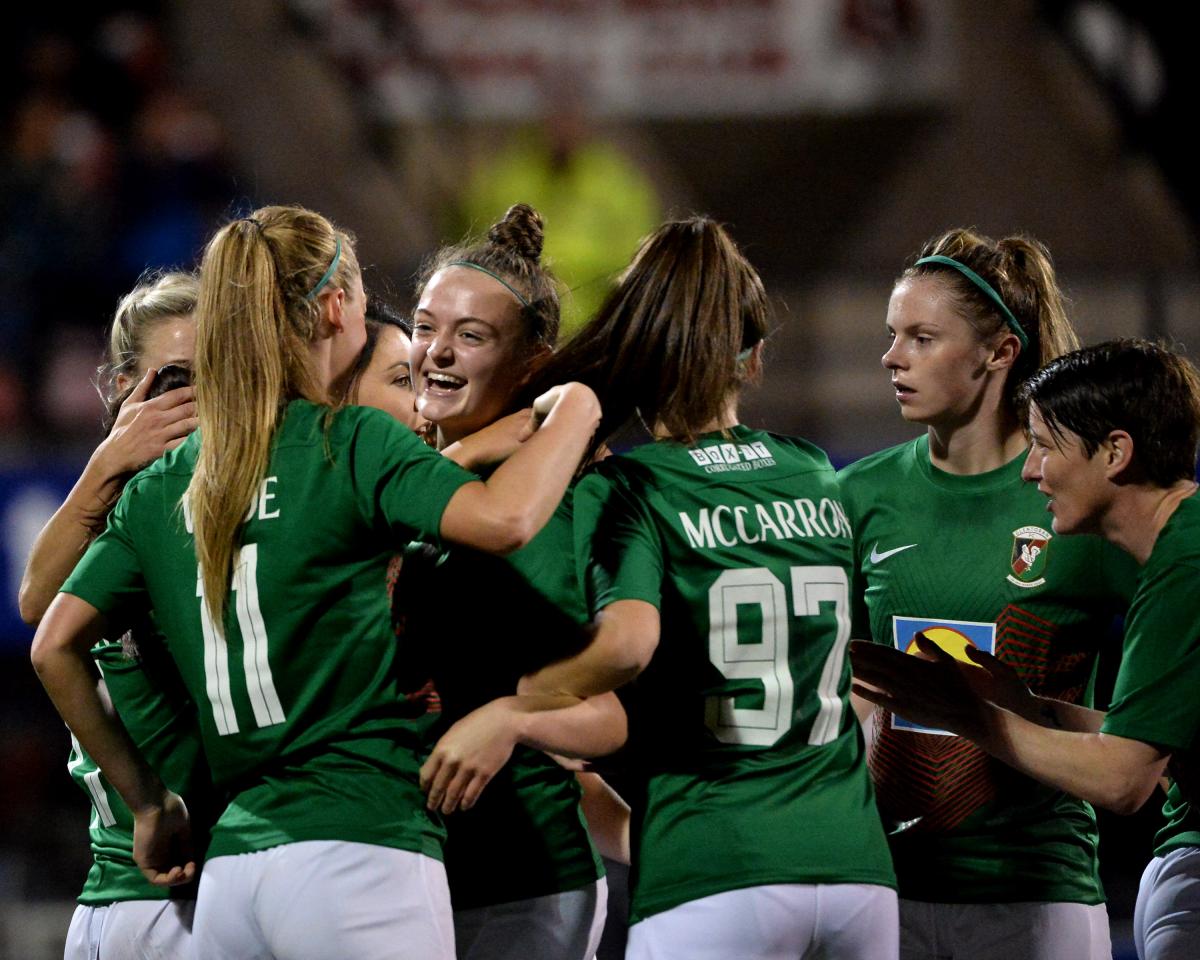 Glentoran certainly didn’t look affected by the equaliser as they started the second half in the same positive frame of mind. Virtually from the break a great solo run and shot from Andrews brought another great double save from Harvey -Clifford, as did similar runs from Lauren Wade and Caragh Hamilton. In the latter case it was a great double save from Hamilton who had also headed the rebound from the first save. Skipper Jess Foy also crossed into the box after a great run, but Kerry Beattie was flagged as just offside.

The Glens made two substitutions to introduce fresh legs after the hour mark as Emma McMaster replaced Nadene Caldwell in midfield and Danielle Maxwell came on for Caragh Hamilton on the right side of attack. Almost immediately Maxwell pulled another great save from the Crues’ keeper after yet another telling run and cross from Andrews. 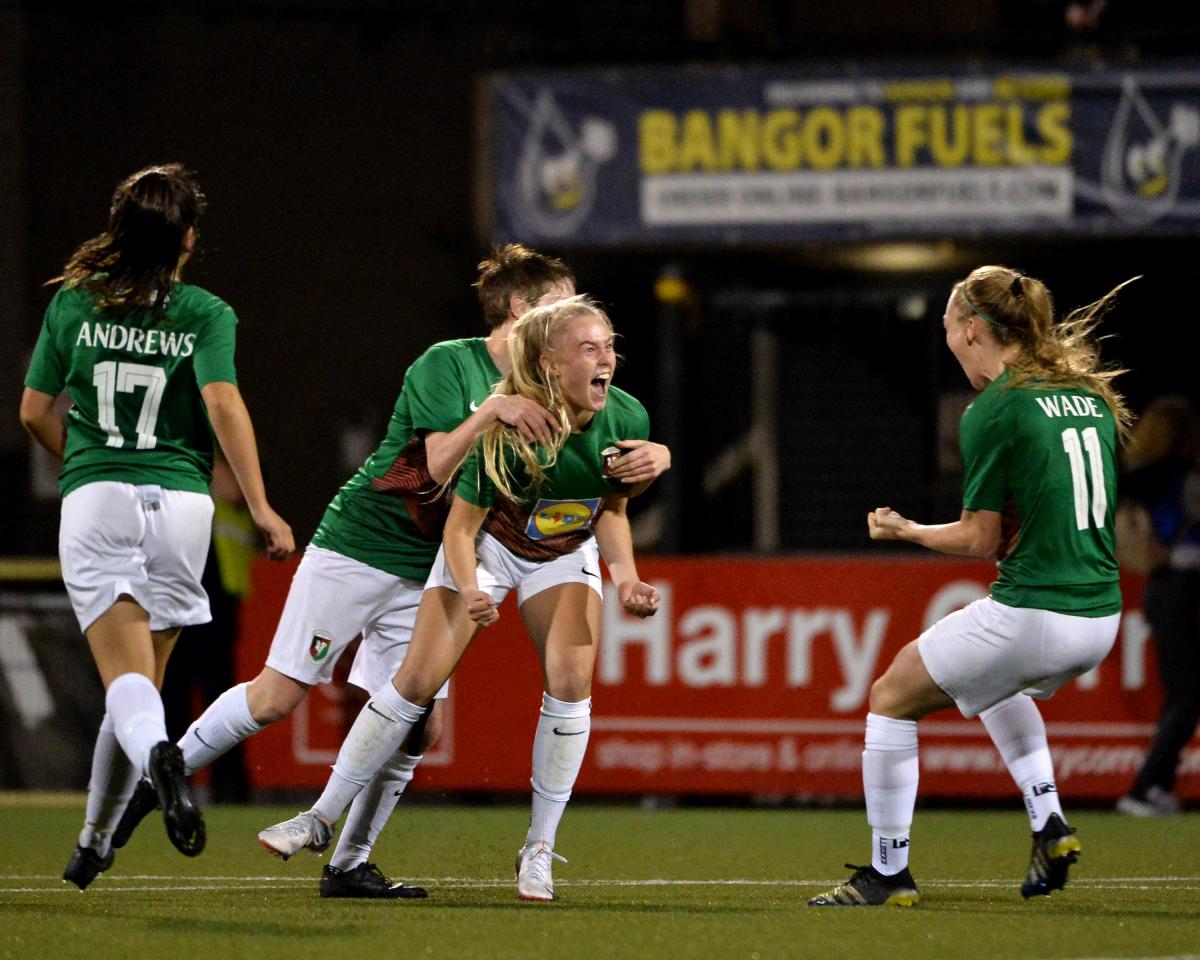 The biggest sucker punch of the night came with 14 minutes to go. In a move reminiscent of the Crues men’s team, a long ball through the middle split the Glens’ defence and with the Glens’ keeper slightly hesitant, substitute Meghan Ingram headed home to give the home side a shock 2-1 lead.

Straight away another great effort from Lauren Wade again showed Harvey-Clifford at her best before Glentoran made their final substitution, introducing attacker Casey Howe for her international team mate McCarron who had played superbly in her deeper central midfield role.

Despite continuing to dominate possession, it looked like it wasn’t going to be the Glens’ night until just inside injury time when Casey Howe received the ball just outside the box and hit an exceptional looping shot over a packed penalty area, giving the Crues’ keeper no chance and giving Glentoran the draw that was the very least their performance deserved.

Both sides clearly tired for the twenty minutes extra time with the only clear-cut effort a great diving header from Wade that brought a save of an equally high standard. But for the lack of chances, the Glens back four of Kelly Bailie, Shannon Dunne, Annie Timoney and Jess Foy remained impenetrable as we reached the inevitable penalties. 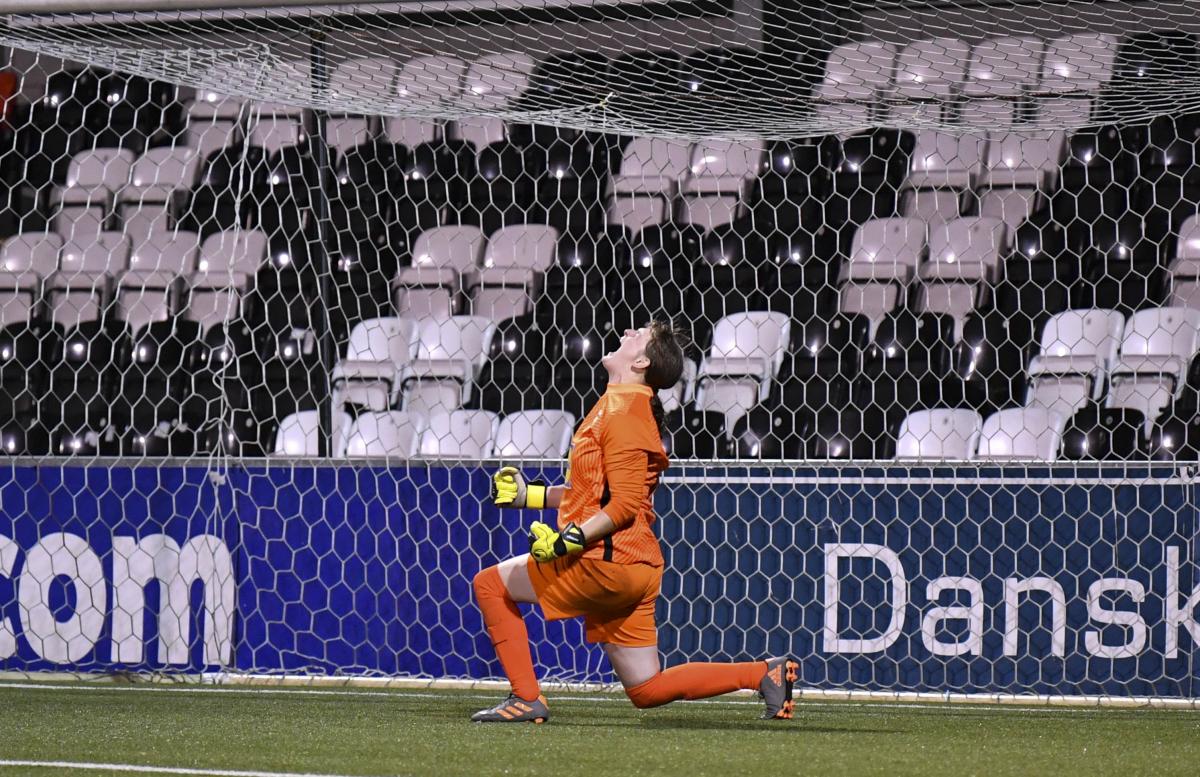 This was when Ashleigh McKinnon’s heroics came to the fore. Glens converted penalties from Foy, Wade and Andrews while Crues converted two but had Julie Nelson’s saved by McKinnon. Things levelled out after the fourth series when Casey Howe’s effort went over the bar. Immediately Danielle McDowell-Tuffey stepped up but ger shot to McKinnon’s left was well saved by the diving Glens keeper. That left our opening scorer Kerry Beattie with the decisive kick, one she hit to the keeper’s right, low into the Crues net for a very deserved winner.

So another night of heroics from this exceptional group of players. With the Danske Bank Premiership and the Toals County Antrim Cup retained, its off to the National Football Stadium at Windsor Park on Friday for the team's last game of another incredible season in the Electric Ireland Women’s Irish Cup Final with the same opposition. Tickets can be purchased HERE. Please turn up. These players and their coaches deserve your support. 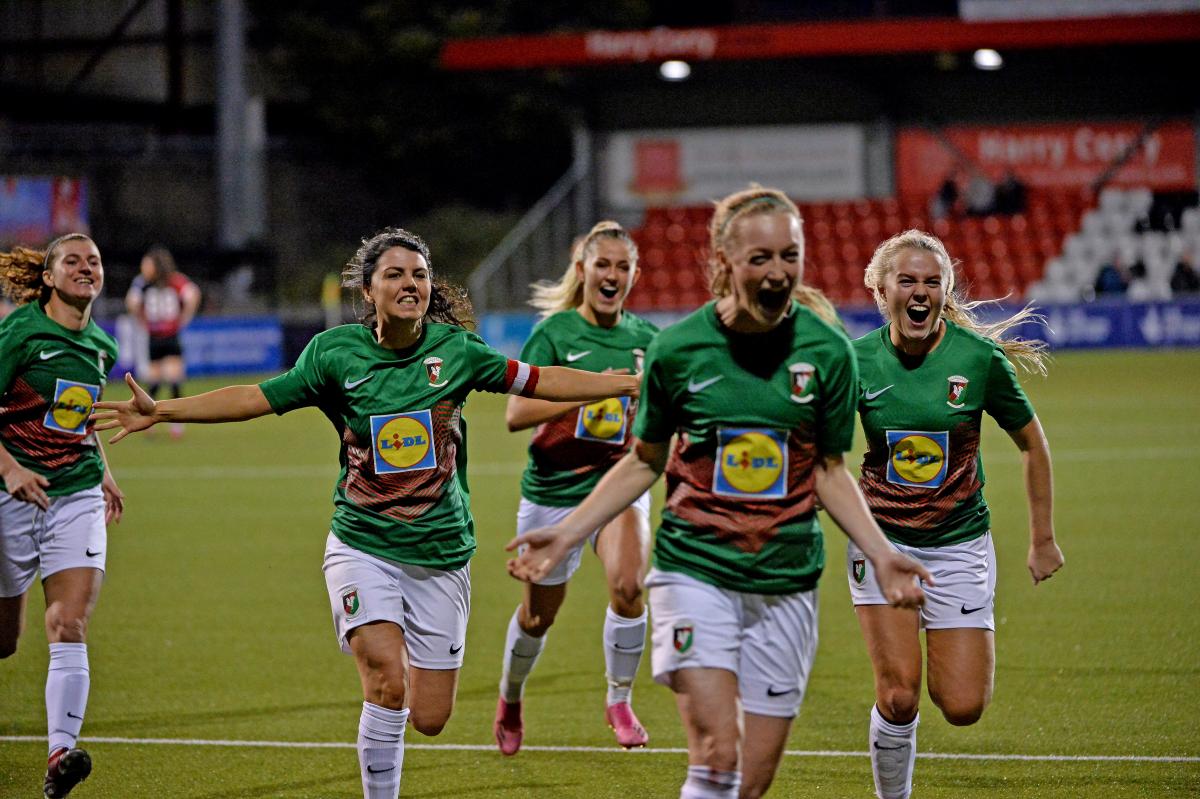 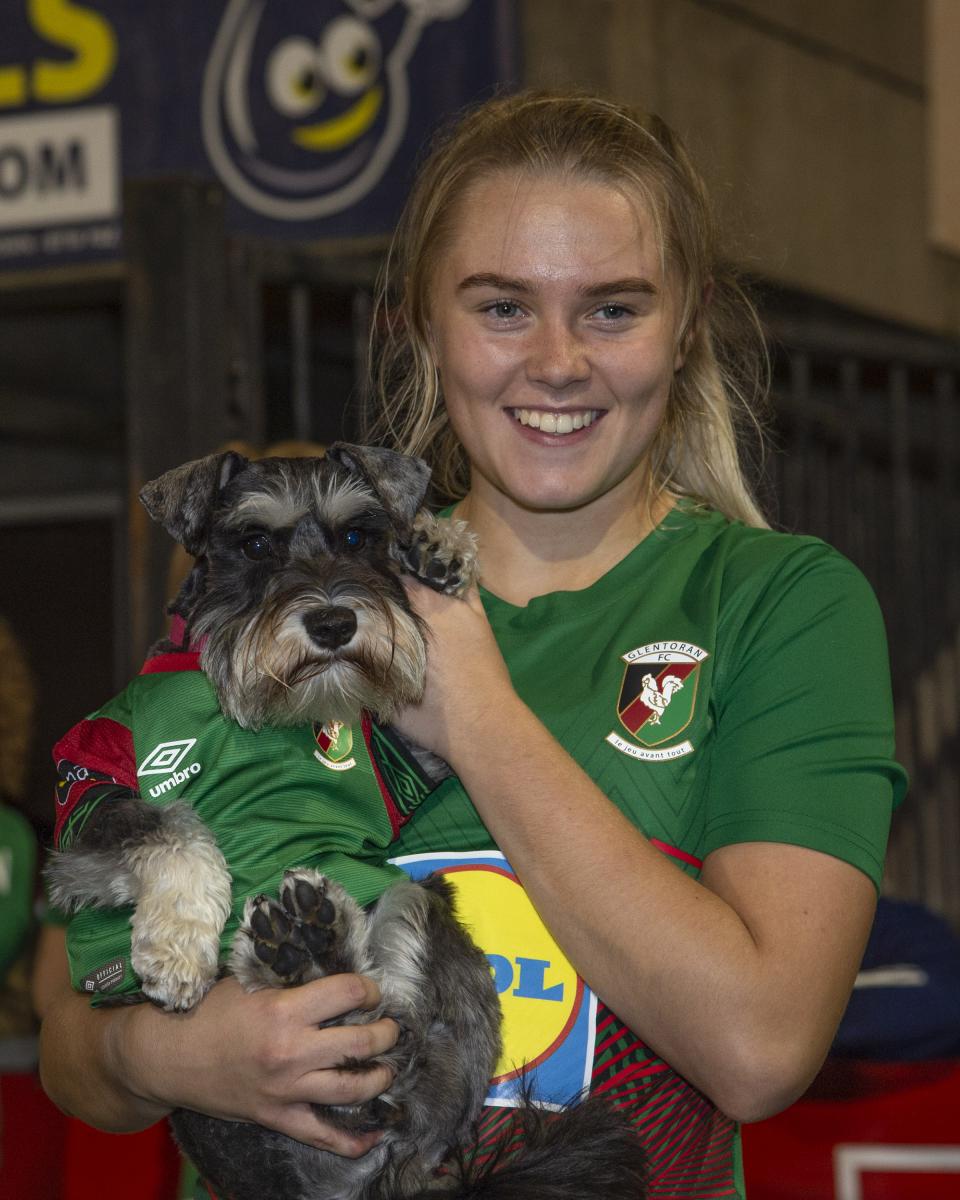 Photography by Johnny Caldwell and Pacemaker 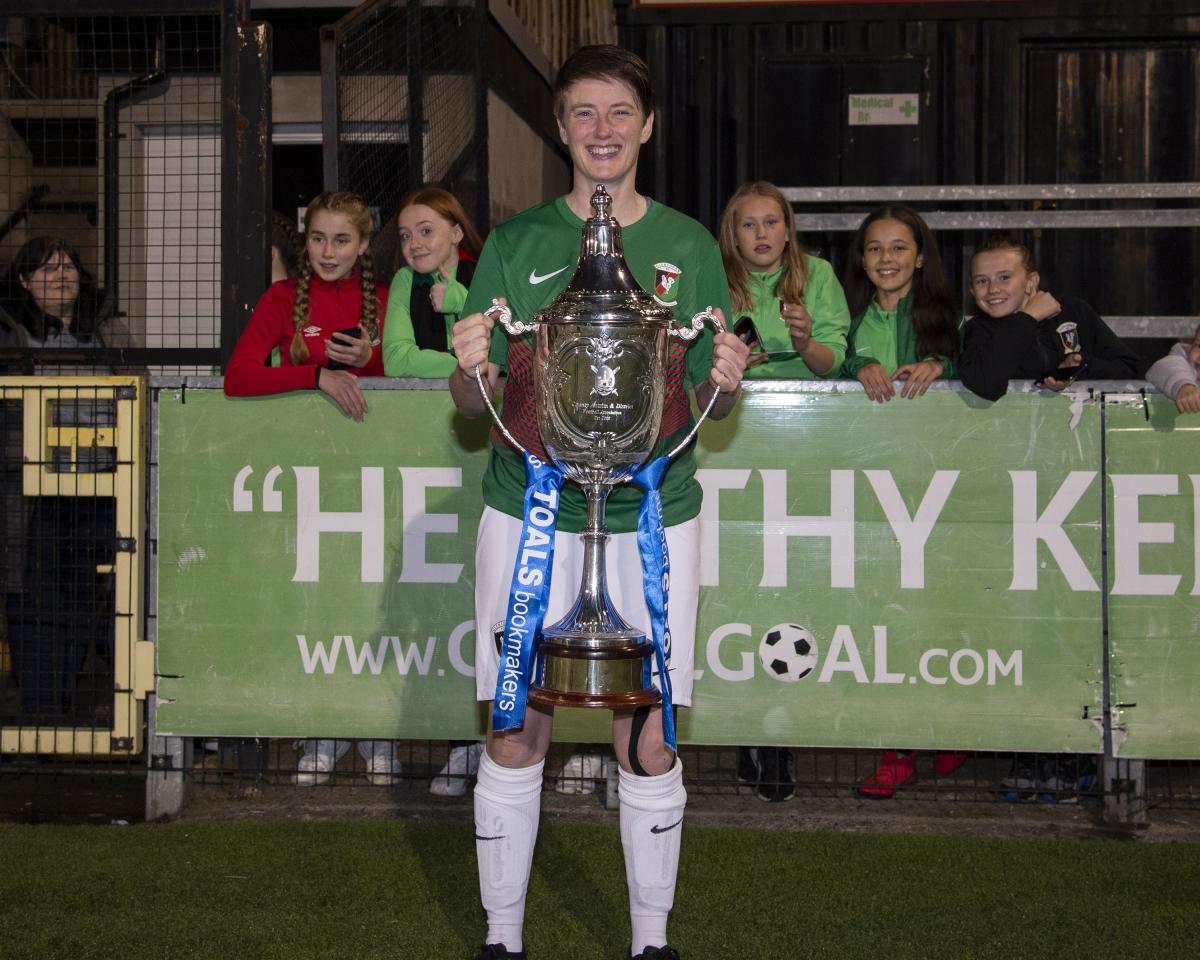