Glentoran travelled to Shamrock Park this afternoon to face a Portadown side that they hadn't beaten in 3 previous meetings this season; but this was the Irish Cup.

The game took a while to come to life as both teams battled hard on a tricky surface. After 18 minutes Nial Henderson almost broke the deadlock. Jordan Stewart's corner was only partially cleared and fell to Henderson on the edge of the area. The midfielder's sweetly struck shot looked goal bound but Miskelly in the home goal, tipped it over the crossbar. Stewart took the set piece which was cleared, again to Henderson. He returned it to Stewart and his dangerous cross was headed goalwards by debutant, Curtis Allen. Miskelly did well to keep it out but Aaron Boyd reacted quickest and smashed home his first Glentoran goal to put the visitors in front.

The lead lasted a little over 6 minutes. A cross into the Glentoran penalty area came off Calum Birney and ran out of play. Referee, Arnold Hunter, initially awarded a corner but then, on the advice of his assistant, gave the home side a penalty; Birney adjudged to have handled the ball. Murray took the spot kick and madie it 1-1. Portadown had a great chance to go in front on 33 minutes. Murray found Twigg and his return pass should have been put away by the big striker. Elliott Morris though was quickly off his line and made a superb stop. Stewart set up a chance for Marcus Kane 8 minutes from the interval but although Kane's 30yard volley was on target, Miskelly dealt with it easily. The home side then spurned two chances to go in with a lead at the break. McMahon found space on the edge of the area but his curling shot was well off target. In stoppage time a Portadown corner was headed narrowly wide by Breen.

3 minutes into the second half Aaron Boyd turned Casement in the area but although Miskelly couldn't hold Boyd's shot, the home defence hacked the ball clear. On 50 minutes Glentoran were awarded a penalty when Boyd was hauled down in the box by Ramsey. The big central defender was yellow carded; arguably he was the last man and it could have been red. Curtis Allen took responsibility from the spot but Miskelly did brilliantly to turn Allen's shot onto the crossbar and the ball was cleared. Just over 5 minutes later the Glens did edge in front. Jordan Stewart put a great ball into the area. Marcus Kane's header was well saved by the Ports keeper and he then parried Boyd's follow up effort. The ball broke to Allen though who netted from close range. On 68 minutes we almost had another one of those special Jordan Stewart moments. Stewart picked the ball up 30 yards from goal and beat 4 Portadown defenders before unleashing a vicious shot which Miskelly did well to keep out. Ports substitute, McStay had a shot on target after 73 minutes but Glentoran skipper, Morris held it at the second attempt. Moments later another shot from another substitute, Barton, was inches wide of the post with Morris beaten. Ten minutes from time the home side were reduced to 10 men. Allen was taken down by Ramsey as he was breaking clear. Hunter produced a yellow card for the central defender, quickly followed by a red. 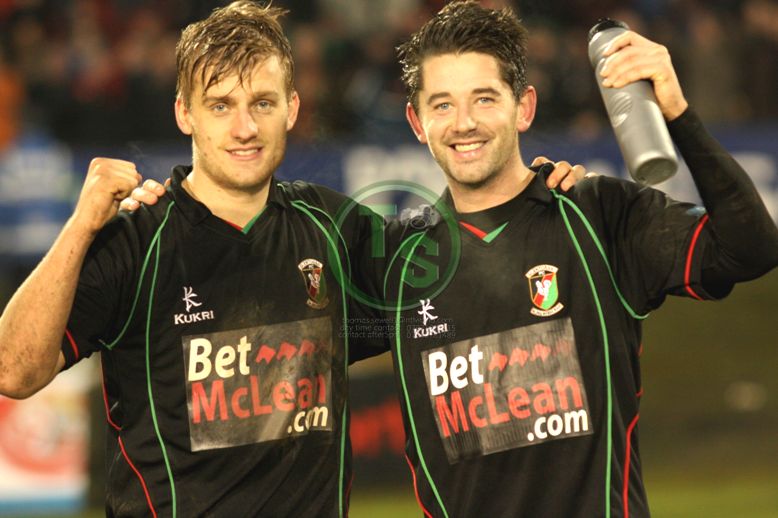 In the dying minutes Portadown threw everything at the Glens but the defence stood firm. Casement went closest with a free kick from near the corner of the 18-yard box but Elliott Morris just wasn't going to be beaten. In added time Glentoran broke down field and Stewart found Allen in acres of space. Glentoran's new striker carried the ball just inside the area before curling a superb left foot shot beyond the helpless Miskelly and into the bottom corner. Cue the wild celebrations from the big travelling Glentoran support. The win was secured and it was Glentoran who'd be going into the draw for the 6th round.