Glentoran have gone top of the Danske Bank Premiership following a 5-nil victory over Ards at the Oval this evening. Manager, Eddie Patterson, started the game with a different formation, opting to go with a 3-5-2 set up and the Glens went in front with just 4 minutes played. A goal kick from Ards Keeper, McKibben was met by Jimmy Callacher. David Scullion raced on to Callacher's forward header and fired home from the edge of the area. Both sides struggled for periods in the first half although it was Glentoran who tended to look the more likely to score again. Scullion's 25 yard effort was straight at McKibben and then Callacher fired just wide from a free kick on 29 minutes. Good inter-play between Marcus Kane, Richard Clarke and David Scullion created a chance for Johnny Addis but he dragged his shot wide. Both Clarke and Magee tried their luck from long range in the closing stages of the first half but neither troubled McKibben in the visitor's goal. 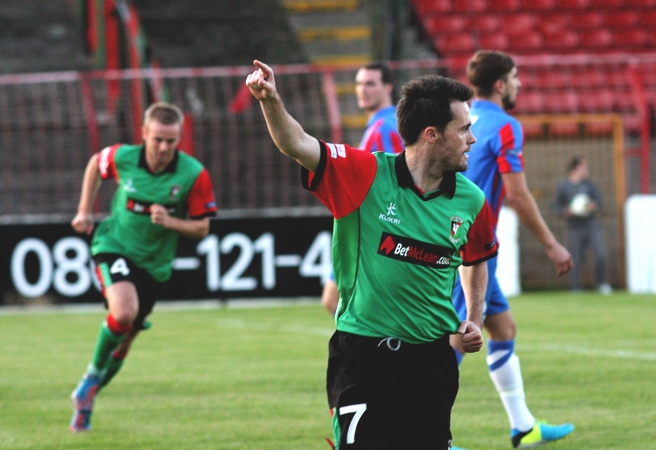 The home side looked lethargic at the start of the second period and were fortunate not to concede an equaliser. Faulkener's effort on 52 minutes was just over the cross-bar and a minute later McMillan's shot was deflected for a corner. McMillan went close again with a curling effort from just outside the area before Glentoran doubled their advantage, somewhat against the run of play just before the hour mark. Stephen McAlorum, who had another excellent game, won a corner on the left. Richard Clarke swung the ball into the area and it broke for Calum Birney who smashed it into the roof of the net.

Addis then did well to set up Callacher but his shot from distance went high and wide of the target. The Glens changed to a 4-4-2 formation during the second period with Callacher, a contender alongside McAlorum for 'man of the match', moving into midfield. Glentoran's third goal came on 75 minutes. The ball was played down the left for Marcus Kane and his superb cross was headed into the top corner by Richard Clarke. It was a fantastic goal and virtually ended the game as a contest. 10 minutes from time Johnny Addis fed substitute, Jordan Hughes and his drilled shot found the bottom corner. Ards were denied a consolation goal late on when Faulkener raced clear of the Glentoran defence. Skipper, Elliott Morris was quickly off his line though and turned the ball away for a corner. In the final minute the home side got their 5th of the evening. Jordan Hughes found Johnny Addis in the 6-yard box. Addis couldn't get his shot on goal but the ball broke for Niall Henderson who netted from 8 yards. 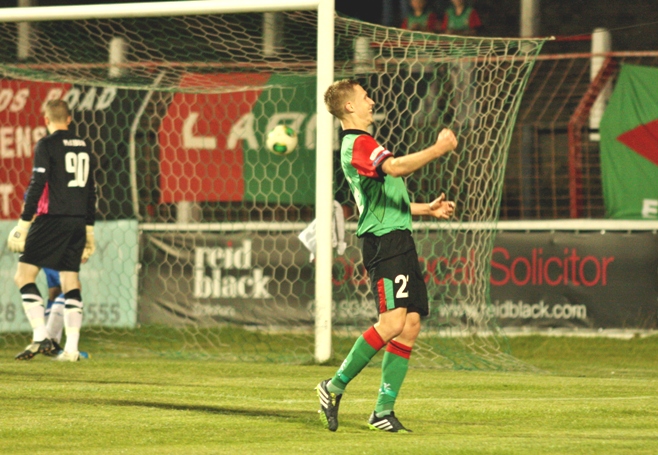 With all the other results going Glentoran's way, the team, unbeaten in the Danske Bank Premiership this season, sit on top of the table on goal difference. They will need another big performance again on Saturday though when Crusaders visit the Oval.