Glens through to semi

Glentoran overcame a physical Knockbreda side at Breda Park this afternoon to book their place in the semi-final of the 2013 Irish Cup. The Glens had an early penalty shout turned down (3) when Richard Clarke appeared to be felled in the area as he tried to get on the end of a Jim O’Hanlon cross but referee Hetherington ignored the appeals. Sean Ward then fired narrowly wide (5) after being set up by O’Hanlon. On 8 minutes the first yellow card of the afternoon was produced for Stephen Hislop for a poor challenge on Stephen McAlorum. With 12 minutes on the clock the Glens got the opportunity to go in front. Richard Clarke played in Jim O’Hanlon and he was taken down in the area with the referee having an easy decision in awarding the penalty. Jay Magee took responsibility and drove the ball into the bottom left hand corner. Knockbreda equalised on 18 minutes. A corner on the right eventually fell to Michael McClean and his effort was adjudged to have crossed the line by the assistant referee. The home side almost went in front 4 minutes later but Elliott Morris tipped James Wright’s 20-yard free kick over for a corner. Just after the half hour the Knockbreda right back, Stephen Curley, appeared to strike Richard Clarke off the ball as Glentoran were preparing to take a free kick and referee Raymond Hetherington produced a yellow card. Glentoran had a number of chances to go back in front in the run up to half time but Jimmy Callacher (35) and Andy Waterworth (37 & 39) failed to test Paul Cairnduff in the Knockbreda goal. Paul Young headed over for the home side on 41 minutes and then at the other end Michael McClean did well to block a shot from Waterworth. 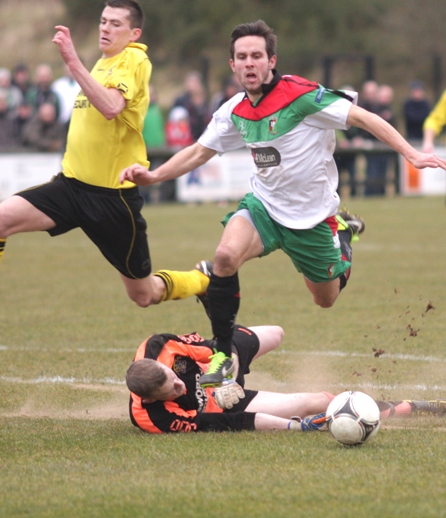 8 minutes into the second half Mark Clarke’s pass found Stephen Carson on the left wing. Carson drove to the goal line before firing in a cross which came off the thigh of the unfortunate McClean and past Cairnduff. On 55 minutes Jimmy Callacher was on hand to clear Paul Young’s dangerous cross. A minute later the home side were reduced to 10 men when Curley picked up a secnd yellow card. Within 5 minutes Knockbreda were down to 9 men when Stephen Hislop appeared to head-butt Andrew Waterworth. Initially the referee hadn’t spotted the incident but was alerted by one of his assistants. Stephen Carson almost made it 3-1 with a 20-yard free kick which was well saved by Cairnduff. With the numerical advantage and a goal lead Glentoran were dominant. Richard Clarke was narrowly wide (65) and then Waterworth broke into the area (66) and had a chance to score. He appeared to be fouled but to his great credit, Andy tried to stay on his feet firing twice at the keeper but being denied both times. The ball eventually fell to McAlorum and he drove it home only to have it disallowed for a handball by the official. On 68 minutes the game was finally sealed when Richard Clarke robbed the ball off a knockbreda defender and drove into the area. His shot was saved but the rebound fell to Waterworth who made no mistake. As the game entered its final stages Waterworth might have had a hattrick, firing wide on 79 minutes and then bringing a save out of Cairnduff in the final minute when perhaps he should have squared the ball to substitute, Carl McComb. Glentoran had one final chance on 93 minutes but McComb’s effort was wide of the target after more good work from Carson.

So Glentoran’s Irish Cup run continues and the team are just one step away from the final. In what has been a difficult season great credit must go to manager Eddie Patterson, his backroom staff and, of course, the players.