From a Glentoran perspective it was the proverbial game of two halves! In the first a young Glens’ side looked out of sorts and the first 45 minutes were littered with individual errors. With just 3 minutes on the clock the visitors spurned 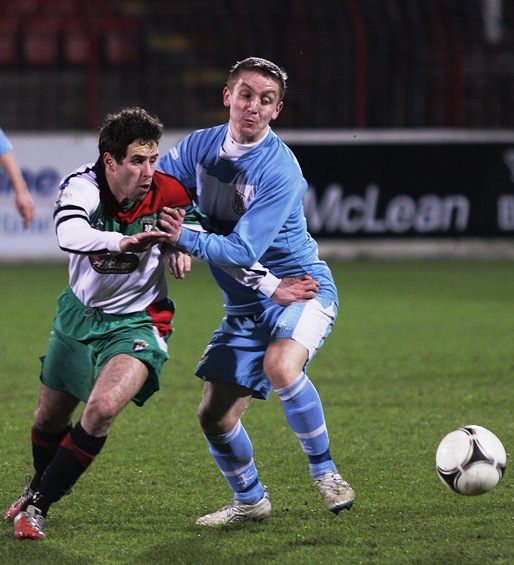 a great chance to go in front when a ball into the Glentoran penalty area wasn’t dealt with by Aaron Hogg but both Gary Liggett and Shane Dolan failed to take advantage. A 20 yard effort from Gary Thompson (8) was blocked by Calum Birney and 2 minutes later the same player forced Hogg to save from a similar distance. A free kick to United brought another chance on 13 minutes but Liggett failed to hit the target from the edge of the area. Other than a wide effort from Andy Waterworth (5), the Glens didn’t really create another opportunity until the quarter hour mark. Waterworth forced a corner. Stephen Carson swung it in and Birney headed just over. A minute later Ballymena United went in front. Skipper Allan Jenkins went down easily in the area when challenged by Jimmy Callacher. Alan Teggart took the resulting penalty and sent Hogg the wrong way. Martin Murray caused an anxious moment for Dwayne Nelson in the visitors’ goal on 19 minutes with a looping header which the keeper gathered at the second attempt after crashing into the post. Good work from Murray on 31 minutes gave the Glens a chance to get back on level terms. Carson played the ball into Murray in the area and he was held by the defender; referee Black awarding another penalty. With Jay Magee still out injured, Andy Waterworth took the spot kick. He sent Nelson the wrong way but the ball crashed off the inside of the post, across the goal and away to safety. Two minutes later the Sky Blues spurned another chance with Chris Rodgers heading over from a set piece.

It was a very different Glentoran which came out for the second half. On 49 minutes Murray fired over and then a minute later Waterworth forced a save from Nelson. Callacher hit the defensive wall with a free kick (53) and Murray was again off target having been set up again by Carson (54). On 56 minutes Marcus Kane was unlucky to his 20 yard effort go just over the top. On the hour mark Jim O’Hanlon, who had an excellent second half, went on one of those wonderful mazy runs but his final pass was just too strong for Waterworth. 3 minutes later Waterworth was played in 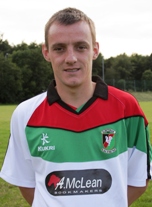 by Carson. He took the ball round Nelson but the keeper pulled him down. Penalty! This time Jason Hill took the responsibility and he found the bottom right hand corner with Nelson diving the other way. O’Hanlon nearly put the glens in front (67) but his header from Carson’s cross was about a foot wide. Birney blicked a shot from Jenkins (75) and then Hogg produced a good save to deny substitute Davidson (76). Glentoran broke straight down field with O’Hanlon rounding the keeper only to see his shot cleared off the line. A superb passing move involving Carson, Murray and O’Hanlon ended with Sean Ward curling a shot just wide on 82 minutes. United had a chance a minute later but great defensive work by Jason Hill saw the ball deflected onto the crossbar and away to safety. A late tackle on Birney by Liggett saw the young Glentoran defender having to leave the pitch. Surprisingly referee black took no action! In the final minute of the game the ball broke to Tony Kane some 30 yards from goal. He struck the ball perfectly and it sailed past Hogg to give Ballymena United all 3 points. The Glens had one final chance in the second minute of stoppage time but Jason Hill headed wide from Murray’s corner.