The dress rehearsal for next Saturday's big Irish Cup 5th round tie at Shamrock Park saw Glentoran leave it until added time to equalise after Portadown came from behind in an eventful encounter in east Belfast.

As fears of flooding and an unplayable pitch were rubbished, the Glens lined up without a recognised striker - Mark Miskimmin (injured), Aaron Boyd (suspended) and new signing Curtis Allen (who was warmly welcomed onto the pitch before kick-off) all unavailable meaning David Scullion was the centre of a three-pronged attack flanked by Marcus Kane and Jordan Stewart. The opening exchanges were relatively uneventful; Mark Clarke's audacious 20-yard effort with the outside of his foot flying high into the Sydenham sky about the only notable shot on target. However, ten minutes later the Glens took the lead as superstar Stewart flicked in Kane's knockdown with his heel leaving Billy Brennan in the Ports goal with no chance. This was Jordan's sixth league goal this campaign making him the club's top goalscorer. The remaining minutes of the half were frustrating for Glentoran as first Stewart and then Kane were fouled before progressing on into good positions however the referee opted to pull play back on both occasions! 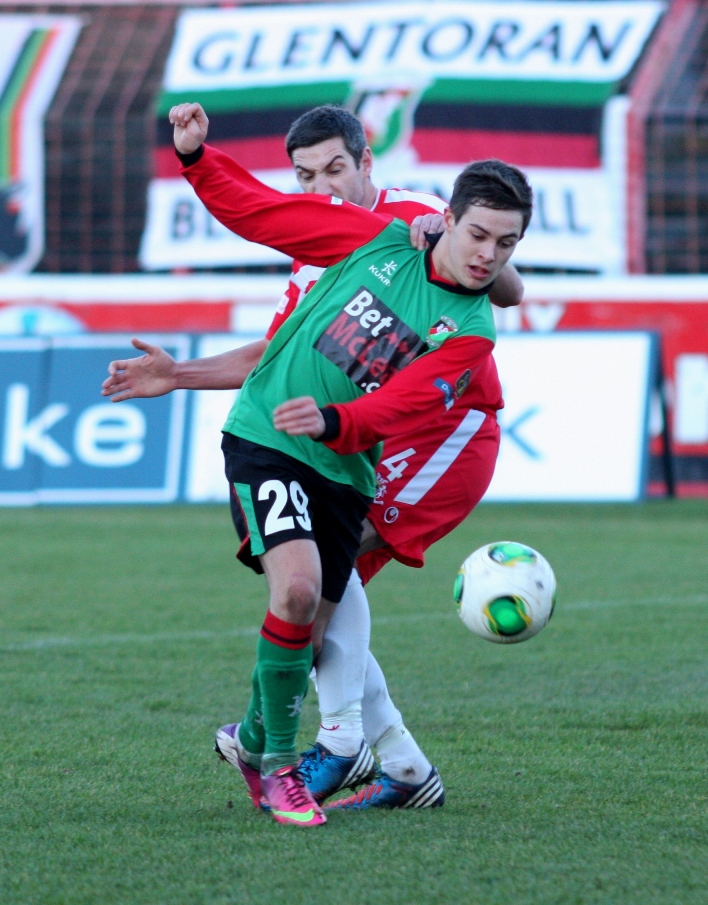 If Glentoran shaded the first half, the second period belonged to Portadown as they produced a revitalised display and the home side struggled to display any minute kind of creativity in the final third. On 61 minutes former Donegal Celtic frontman Darren Murray latched on to a hopeful long ball. Glens centre back Jonny Addis let it bounce and it bounced kindly for the onrushing Murray to hammer home a spectacular strike from just inside the box that gave Elliott Morris absolutely no chance. In an effort to get back on the front foot, Patterson replaced Niall Henderson with Jim O'Hanlon who made his 100th appearance in a Glentoran shirt at the young age of 20 years old. Then, just ten minutes later Portadown went in front with another fantastic effort, this time from Chris Casement. The full-back drove forward, cut inside and curled a delightful effort past Morris and into the bottom corner. A sweet strike it may have been, but the Glentoran defence and midfield will be disappointed with the way they gave him so much time and space without a single green shirt closing down. 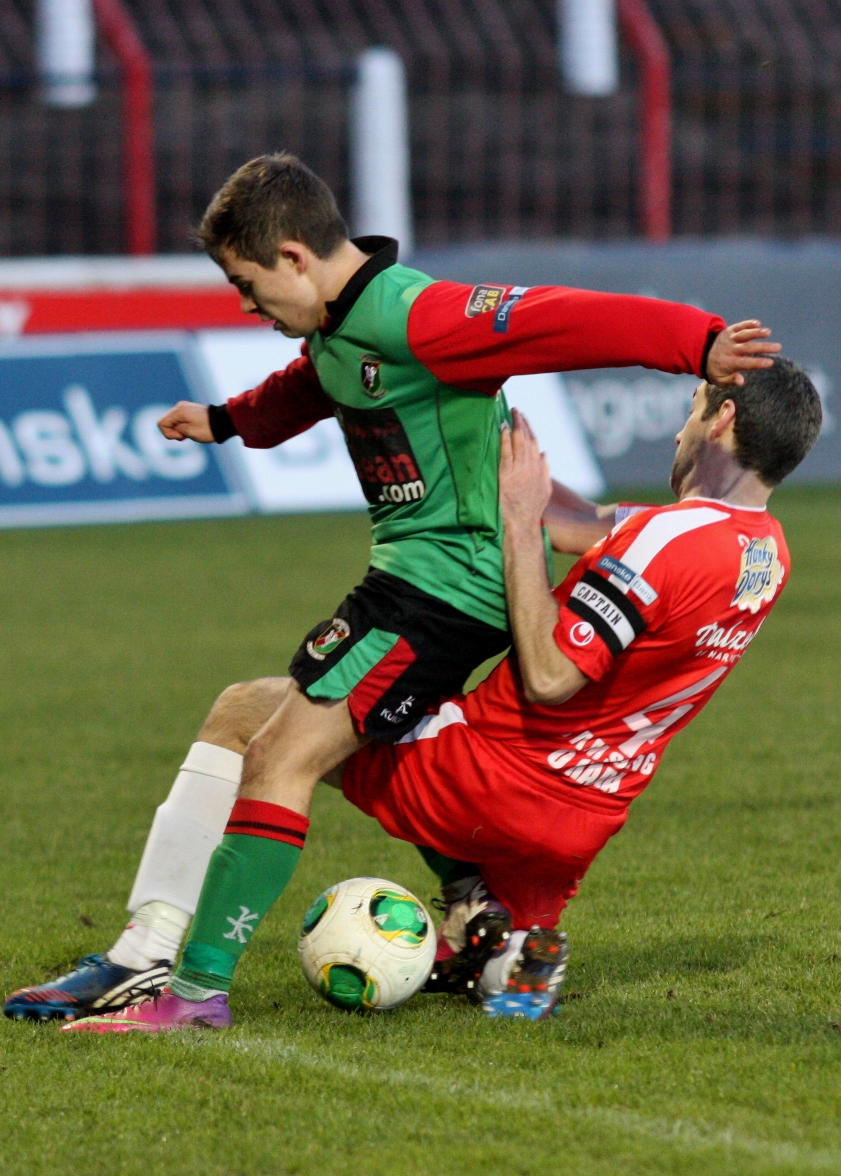 It had been a game of very few chances and as the east Belfast side pressed for an equaliser clear-cut shooting opportunities were fairly restricted by a stubborn away defence. Corner after corner and free-kick after free-kick was launched into the box only to be repelled with relative ease by the Ports defence. It seemed as though we were destined for yet another defeat at the Oval, but with just seconds remaining a corner kick saw everyone - including Morris - pile into the Ports box. The ball was cleared as far as Jordan Stewart, who did brilliantly to smash a controlled volley goalwards when it would've been very easy to slice it, and his shot proved too hot to hold on to for Brennan. The stand-in 'keeper fumbled and centre back Jay Magee was there to poke home the rebound and send Glentoran fans home with a smile on their face. 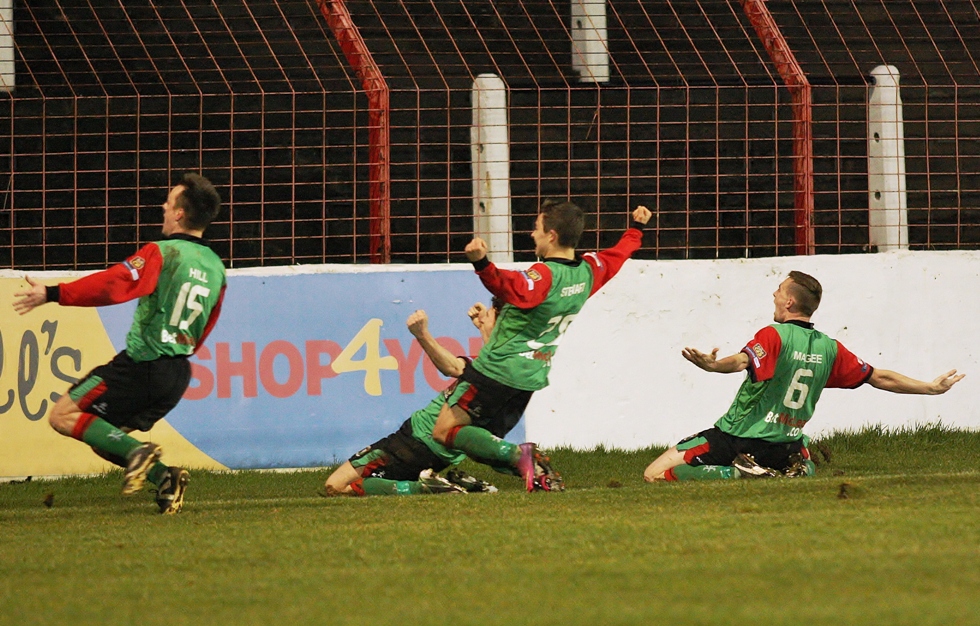 Portadown arguably deserved to take all three points but credit to the home side who kept pressing and pressing with a never say die attitude. Next week we travel to Portadown for a huge Irish Cup clash as we try to defend the title that we won in May. The game is ALL-TICKET and details can be found in the news section of this site.