Glentoran recorded an emphatic 6-1 win in their annual friendly match with Dundela at Wilgar Park.

The home side included a host of former Glentoran players for this game including the recently released Owain Beggs, former striker Michael Halliday along with Ross Davidson, Kyle Cherry, Daniel Burns and a few others.

Dundela started brightly and Michael Halliday went close on a couple of occasions. Johnny Addis and David Scullion also spurned opportunities before the deadlock was finally broken on 32 minutes. Scullion's effort was initially blocked by the Duns defence but the ball broke to Jordan Hughes and he fired home an unstopable shot from 20 yards. Hughes played a major part in the second goal too, outpacing Ross Davidson down the right before putting a good cross into the area. David Howland controlled the ball before driving the ball into the top corner to make it 2-nil. 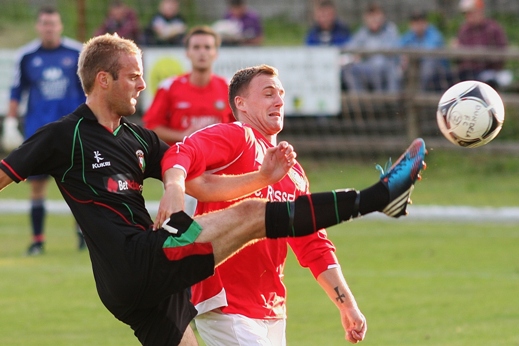 Both sides made changes for the second period and one of those, Richard Clarke, made it 3-nil to the visitors on 47 minutes. Richard, who has been at the Milk Cup this week, obviously picked up some tips from the youngsters! His 25 yard shot was probably as good a goal as any of us will witness this season. 10 minutes later skipper, Elliott Morris, had to be at his best to stop Owain Beggs effort on goal. Just before the hour a long ball forward was flicked on by Mark Miskimmin and David Scullion cooly lifted the ball over the keeper for number 4. Miskimmin got the 5th when he was played in by Richard Clarke and with just 5 minutes remaining a quick trhrow from Kevin Bradley found Mark Miskimmin. He fed Carl McComb and the young striker made no mistake firing low across the keeper and into the bottom corner. Dundela got a deserved consolation goal in the final minute, Mark McClelland nodding home from close range.