A 79th minute Shane Jennings equaliser for Coleraine cancelled out Marcus Kane's first half wonder strike at the Showgrounds this afternoon. 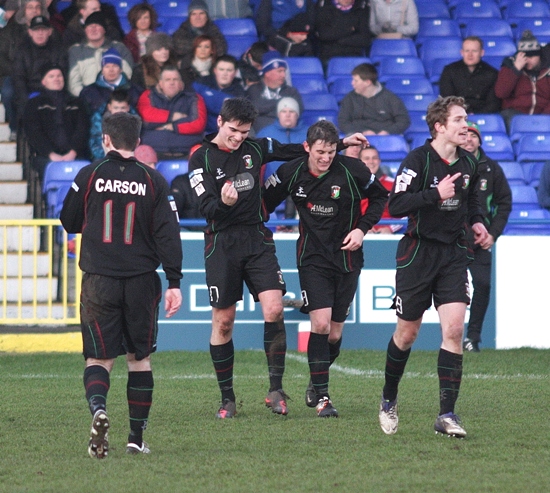 Glentoran left Coleraine with a well deserved point from their 3rd Danske Bank Premiership meeting of the season. Manager, Eddie Patterson, opted to stick with the same 11 which defeated Donegal Celtic so emphatically on Saturday and the Glens were quickly into their stride, forcing a corner in the 3rd minute which Calum Birney headed straight at Michael Doherty in the Coleraine goal. The home side first real chance came on 11 minutes with Aaron Canning testing Elliott Morris from the edge of the area. Andy Waterworth fired an effort into the side netting (12) and Richard Clarke was unlucky to see his snap sot deflected for a corner (14). Curtis Allen tried his luck from 30 yards on 19 minutes but his shot went well over the bar. Richard Clarke, who had been in superb form in recent matches, was forced off with a thigh injury just before the half hour mark. He was replaced by Jason Hill with Marcus Kane pushing forward into the midfield. A break from defence involving Hill and Carson created another chance for Waterworth but his first time effort was deflected behind. Allen again went close for Coleraine with a dipping shot which went narrowly wide of the far post. On 45 minutes the Glens took the lead. Elliott Morris cleared the ball downfield and it broke for Jimmy Callacher who found Marcus Kane. Kane struck it sweetly with his right foot from 25 yards, giving Docherty no chance! Coleraine skipper, David Ogilby, was fortunate to escape punishment following a reckless tackle on Waterworth in first half stoppage time and moments later Jimmy Callacher saw his goal bound shot blocked by the home defence.

Glentoran dominated the first 20 minutes of the second period but were unable to find the decisive second goal. David 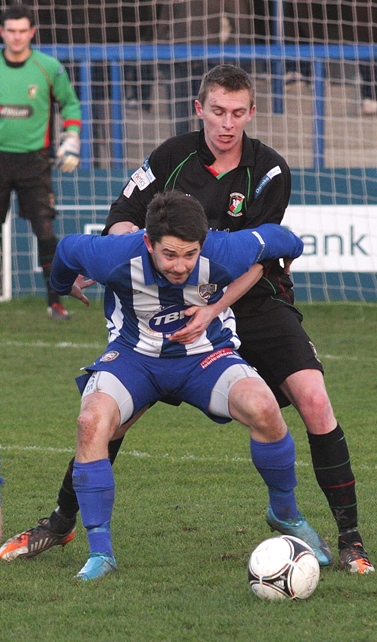 Howland (47) saw his shot deflected for a corner whilst 2 minutes later Andy Waterworth ran on to a superb pass from Stephen Carson and rounded the keeper only to see his shot cleared off the line. Mark Clarke, another scorer from last weekend, went close with a 25-yard drive on 51 minutes which whistled just over the bar. Coleraine almost levelled on 57 minutes. They were awarded a free kick in midfield. The set piece was taken quickly, some 15 yards or so away from the spot of the foul! Curtis Allen, looking suspiciously offside, was put clear through on goal but Elliott Morris made a fantastic save to deny him. It was one of a number of bizarre decisions that referee Colin Burns made on the day to the frustration of both sets of supporters. Jimmy Callacher shot off target (66) whilst Morris saved well from substitute, Gillan (68). Waterworth was off target (69) and then Allen missed a great chance to equalise (72) when he headed straight at the Glentoran keeper from 6 yards. 11 minutes from time Coleraine finally breached the Glentoran defence. In the build up, Allen appeared to handle the ball but Burns waved play on and substitute, Shane Jennings ran on to the through ball and as Morris raced from his line, the Coleraine player slid the ball home. Curtis Allen should have possibly won the game for the Bannsiders but with just 5 minutes remaining he managed to put the ball wide from 2 yards out! On 87 minutes David Howland was the victim of a blatant foul as the Glens went in search of a winner. Referee Burns waved for a non-existent advantage and Coleraine almost took advantage of yet another poor call from the official, winning a corner and almost grabbing a second goal.