Glens back on track

After Monday night's Sky Sports showcased shocker, Eddie Patterson's Glentoran side were eager to bounce back and resume the regular service that we'd seen during the two spectacular months of October and November. Indeed, Warrenpoint Town bore the brunt of a rejuvinated second-half performance from the Glens after a lacklustre opening period, with the Oval side departing their east Belfast home 3-0 winners.

As the game kicked off, goalkeeper Elliott Morris reached an unprecedented Glentoran milestone as he passed Alan Patterson's record for the most appearances between the sticks in the famous strip and, after a weak Kane effort was easily gathered by Jonathan Parr in the Warrenpoint Town goal, Morris had to be alert to smother Stephen McCabe's close-range effort before Daniel Hughes fired inches past the post on 23 minutes; the home defence was tore apart with worrying ease as the Premiership new-boys looked to make their early mark on the game.

In truth, it was a very quiet 45 minutes - but with only three minutes left on the first-half clock wonderkid Jordan Stewart struck another special strike from inside the box as a scramble for the ball saw it sit up beautifully for the youngster; his instinctive left-foot swing connected perfectly to leave Parr rooted to the spot as it rippled the top-right hand corner.

The early stages of the second half will live long in the memory of Johnny Addis' - it just would not go in for the former Carrick Rangers frontman. On 49 minutes, Addis looked certain to open his Oval account as he turned an effort goalwards after a corner-kick only for Darren King to clear off the line. Then less than a minute later, the versatile striker should've scored from six yards only to blaze his effort over whilst off-balance!

Addis was almost made to rue his miss on 58 minutes as Liam Bagnall was left unmarked in the box but luckily for the east Belfast side he could only direct his effort straight into the grateful hands of Morris. In an effort to cement his side's winning position Patterson replaced Addis with Mark Clarke and pushed David Scullion into the lone-striker role. It proved to be a masterstroke! With just 17 minutes left on the clock Scullion duly rewarded his manager as Stephen McAlorum played a magnificent through ball to the onrushing summer signing and, with a subtle touch of the outside of his foot, the ex-Coleraine man made it 2-0 to the home side.

Just four minutes later and Glentoran made it 3-0. This time Richard Clarke beat a defender, drove forward and threaded a fantastic pass into the path of Scullion and he wrapped up the three points by expertly dispatching the ball past Parr into the far corner. Just before the final whistle he almost had a hat-trick but unfortunately his deft lob from the edge of the box glided agonisingly past the post.

Back to winning ways then and we're still fourth after Cliftonville, Crusaders and Linfield all won their respective games. Next up is a very tough trip to Seaview as we face the Crues; league leaders and unbeaten in the league since 17th August with 11 wins (including a 3-0 victory at the Oval) and 6 draws since they were last defeated. Hope to see you all there. 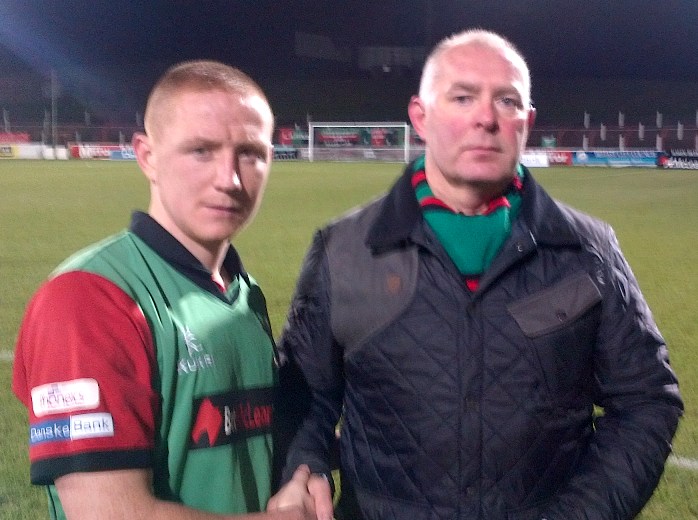