Glentoran progressed in the Bet McLean League Cup, booking their place in the quarter-final following a penalty shoot-out win at Mourneview Park. There were two changes from the previous game in Lurgan last time out; Mal Smith and Rory Donnelly coming into the starting line up with Gael Bigirimana and Caolan Marron dropping to the bench. 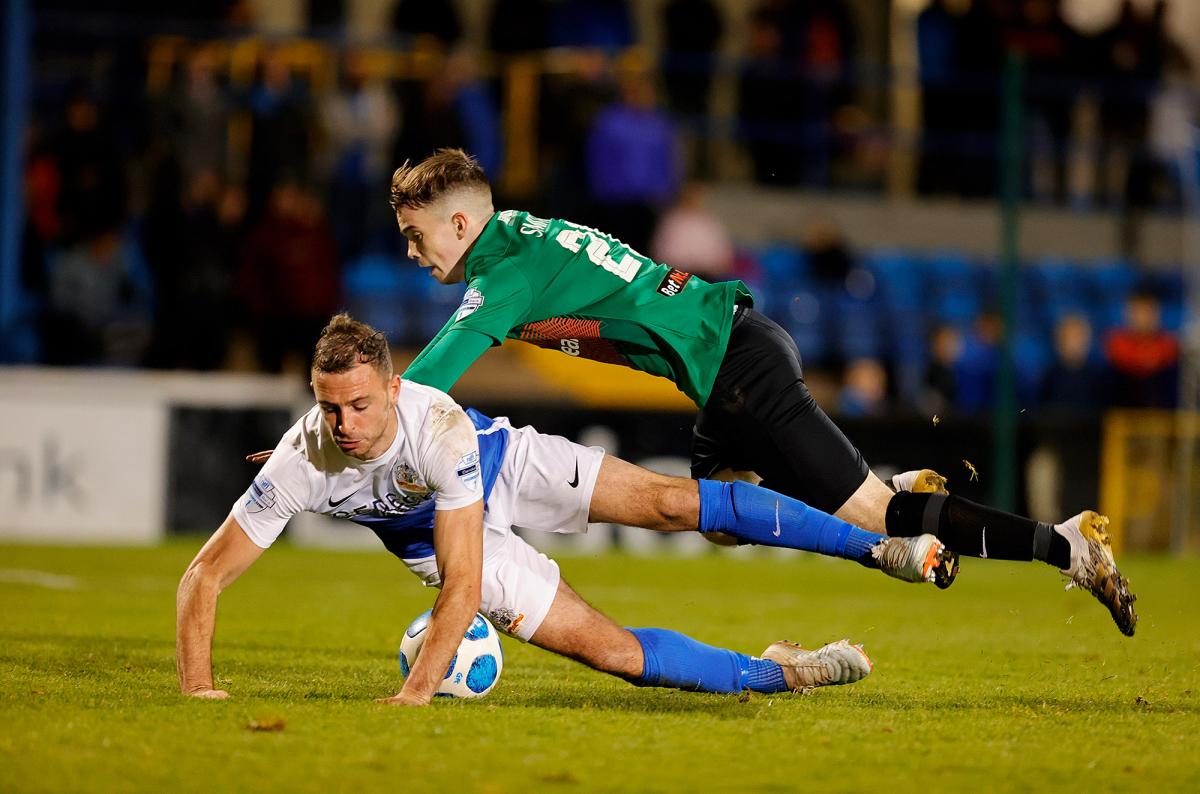 The first 45 minutes wasn't great with the game being constantly stopped for free kicks. It seemed that every time a player went to ground it was deemed a foul and all the breaks in play made it a hard watch! Glentoran did have an early chance on 3 minutes when Rory Donnelly cut in from the right but his shot, from a tight angle, was turned behind by James Taylor in the home goal. A Michael O'Connor free kick forced a great save out of Aaron McCarey and then from a set piece at the other end, Hrvoje Plum's free kick was met by Robbie McDaid but he was flagged offside. 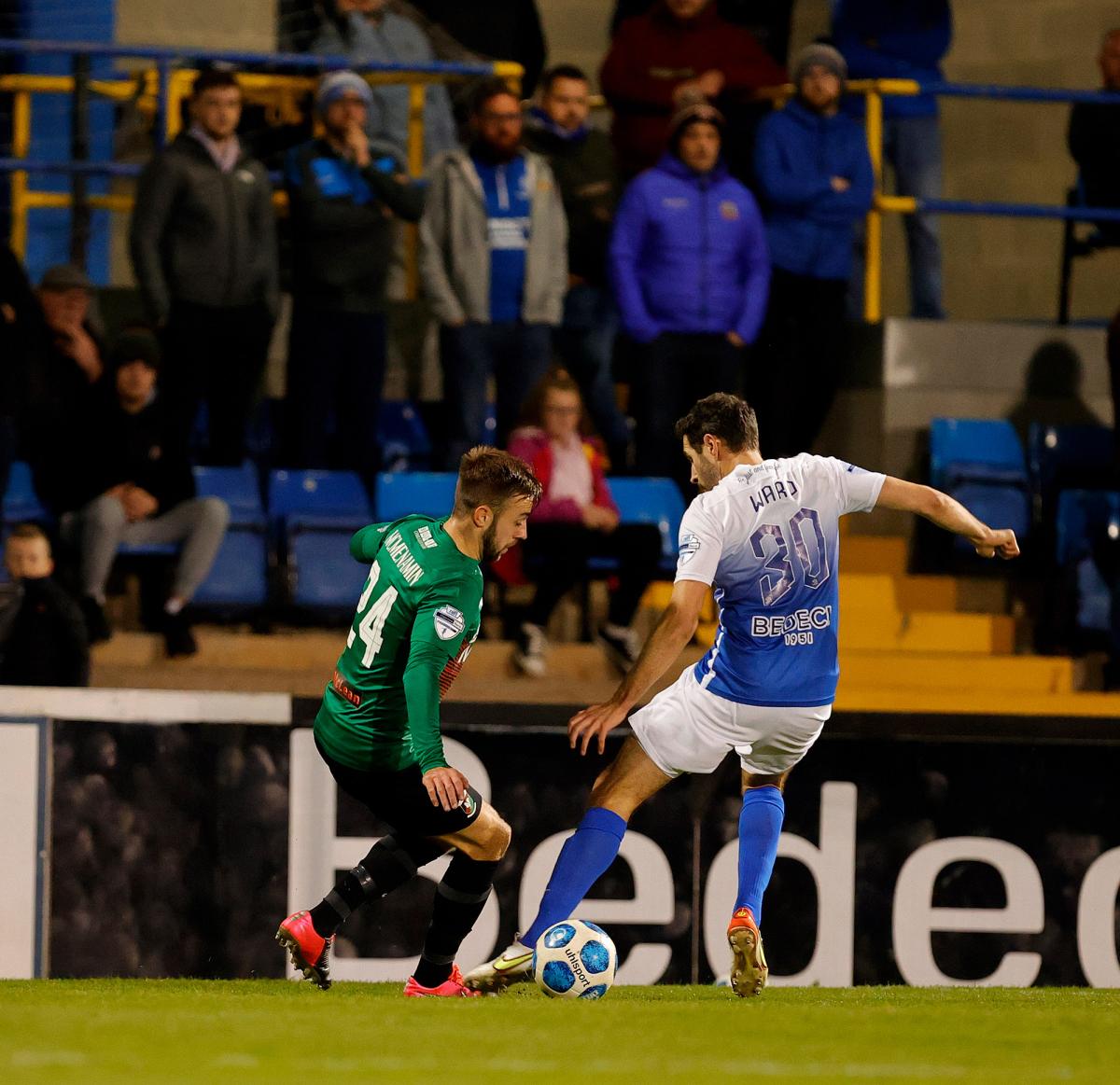 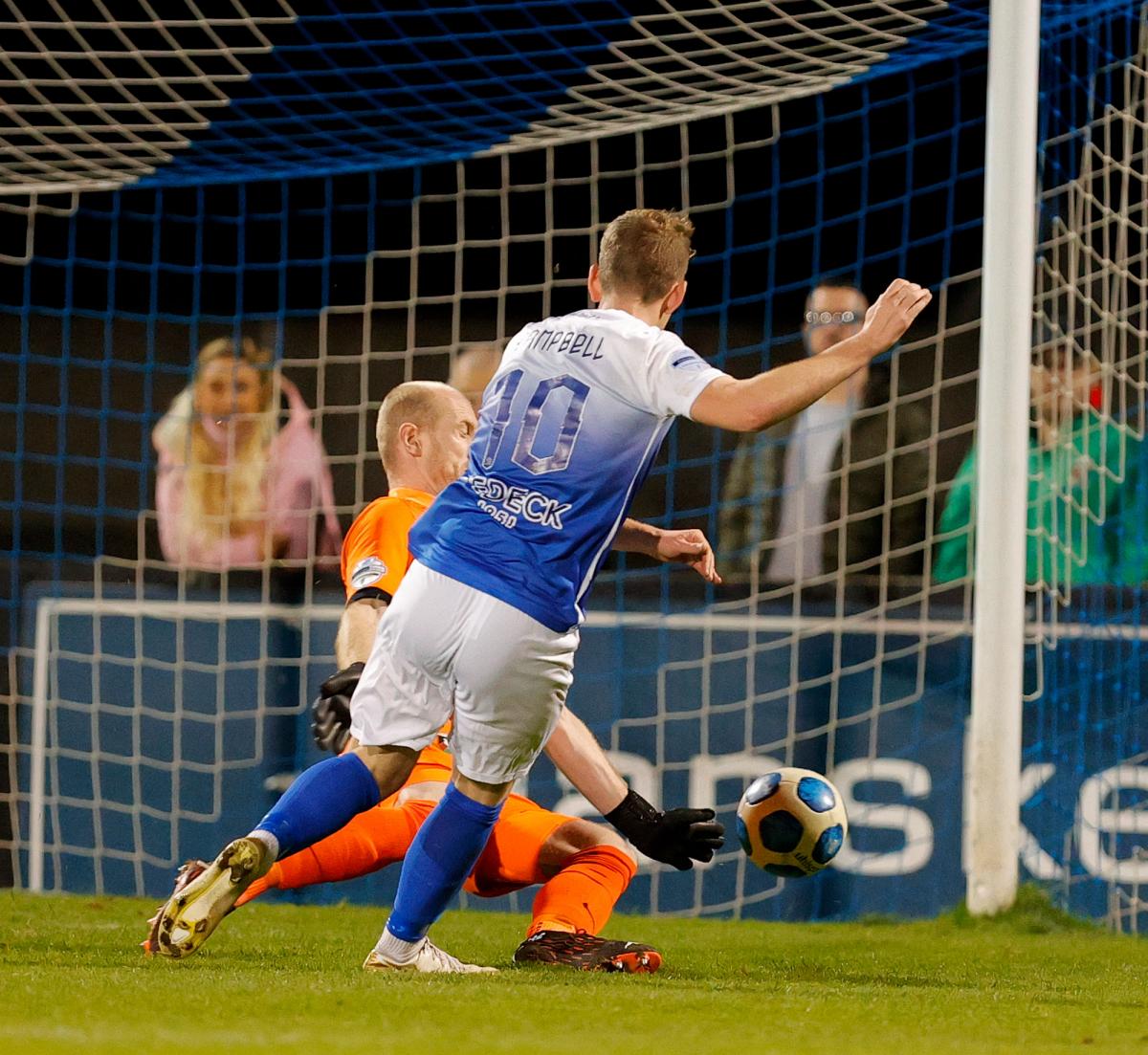 Glenavon had a great chance to go in front on 19 minutes, the ball being played to Peter Campbell in the area but he fired wide of the target when well placed. Conor McMenamin's effort was comfortably dealt with by Taylor before Aaron McCarey was forced to save from another O'Connor free kick. Andrew Doyle was perhaps fortunate only to pick up a yellow card from referee Andrews following a very high challenge on Robbie McDaid. Sean Ward was also cautioned when Conor McMenamin outpaced him and he was left with little option other than to haul back the Glentoran striker. 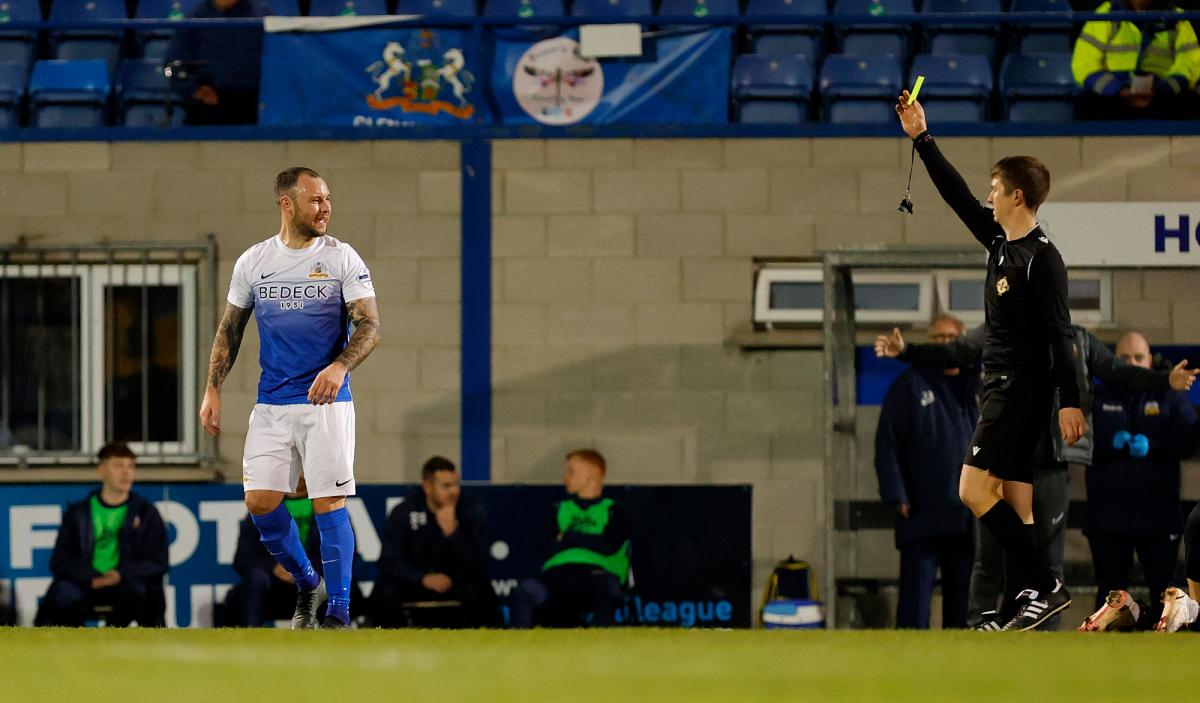 A superb interception and pass from Mal Smith set Rory Donnelly clear on the left a minute after the break but his cross was cut out by the Glenavon defence. Another free kick to the home side failed to beat McCarey and then Matthew Fitzpatrick headed over from another set piece. Fitzpatrick really should have opened the scoring on the hour mark but man of the match, Aaron McCarey produced an outstanding save to keep him out. Doyle headed over from a Glenavon corner and then Michael O'Connor's 25-yard free kick flew wide of the post. Both teams had half chances in the dying minutes. Firstly a cross-shot from Peter Campbell flew just over the bar whilst at the other end a Conor McMenamin effort from the edge of the area was deflected behind for a corner. 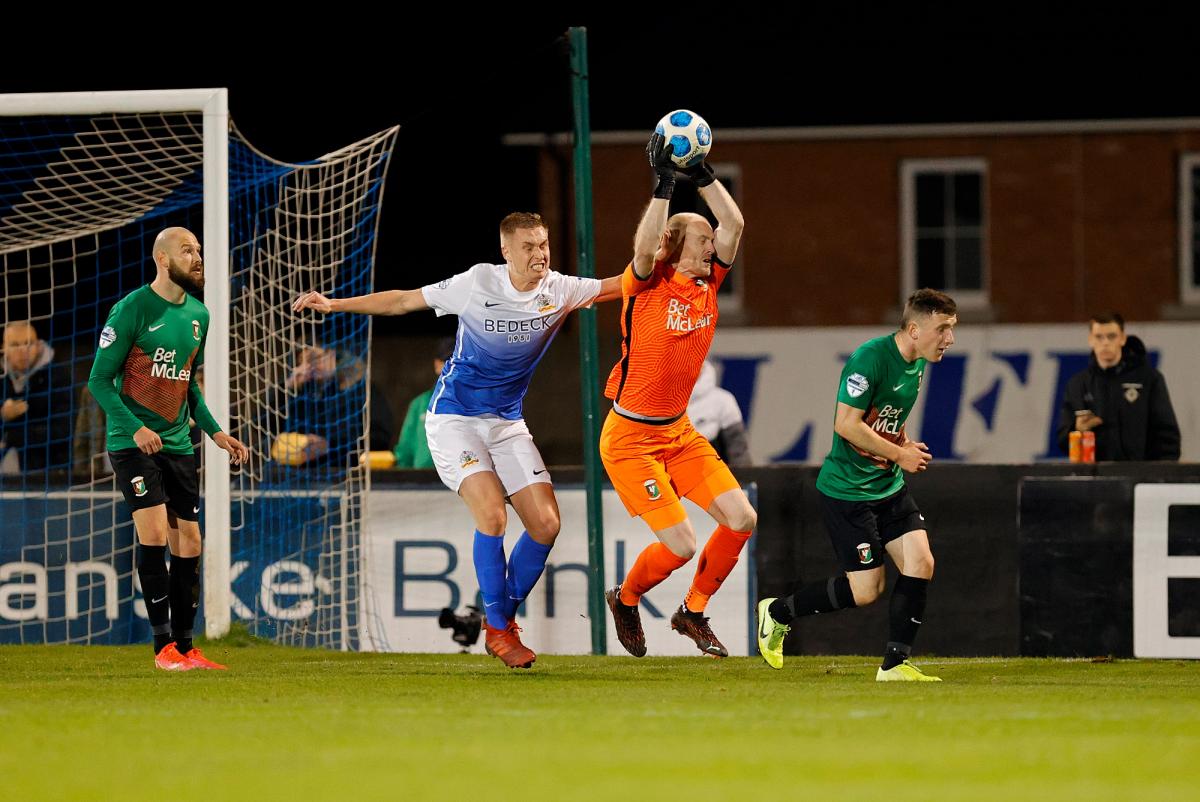 A hard but fair challenge brought a yellow card for Seanan Clucas early in the first period of extra time. Clucas clearly won the ball but caught Snoddy with the follow through. Another of those refereeing decisions which leaves fans both confused and frustrated! 6 minutes into extra time Glenavon missed a great opportunity to go in front. Another free kick, this time struck by Andrew Hall, was turned behind by McCarey. From the corner the ball wasn't properly cleared and a shot from the edge of the area struck McCarey's left hand post before Bobby Burns cleared the danger. 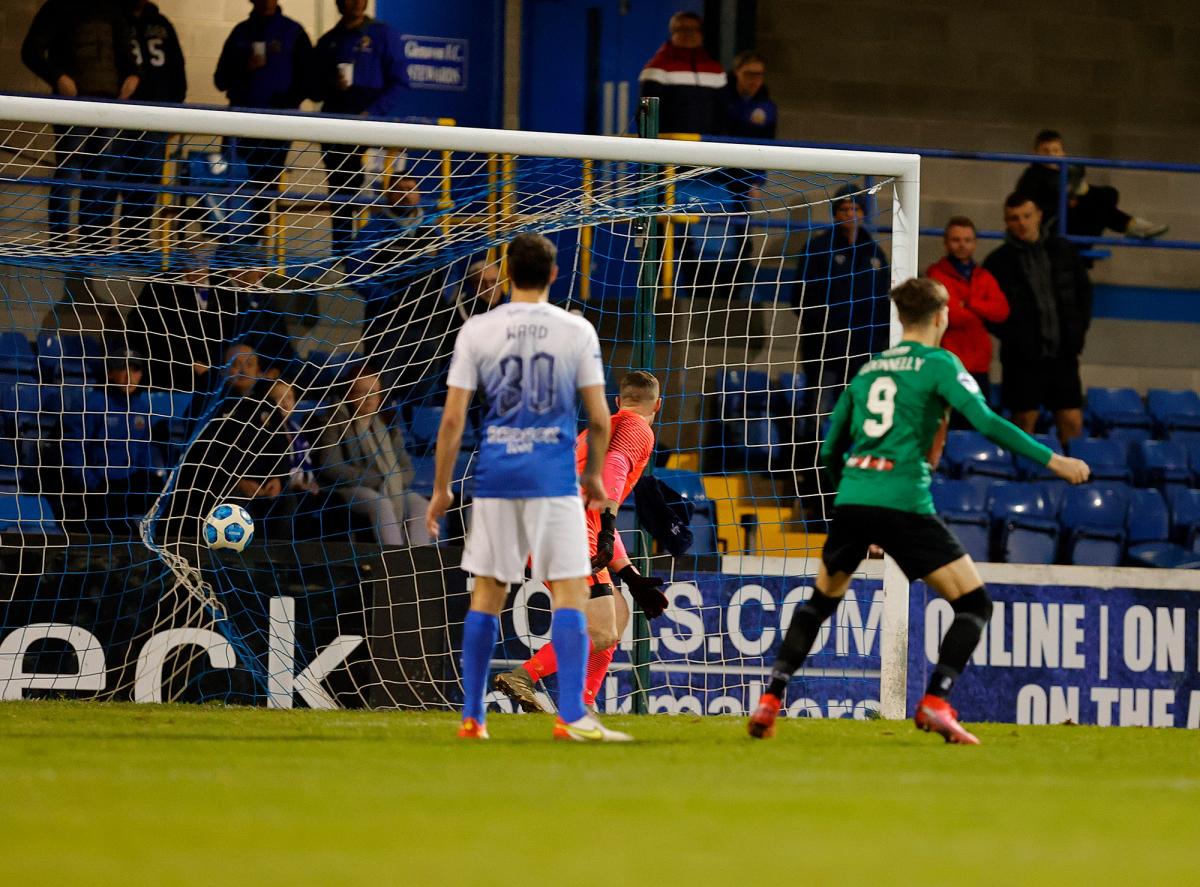 Glentoran went in front on 96 minutes. A superb cross from the right from Rhys Marshall was met by Robbie McDaid and his stunning header powered past a helpless Taylor to make it 1-nil. Conor McMenamin came close to doubling Glentoran's advantage with a curling shot from the edge of the box but the ball flew just wide. A minute later though the scores were level. Rhys Marshall was adjudged to have fouled a Glenavon forward just inside the area. Andrews pointed to the spot and Andrew Hall drilled the ball home. 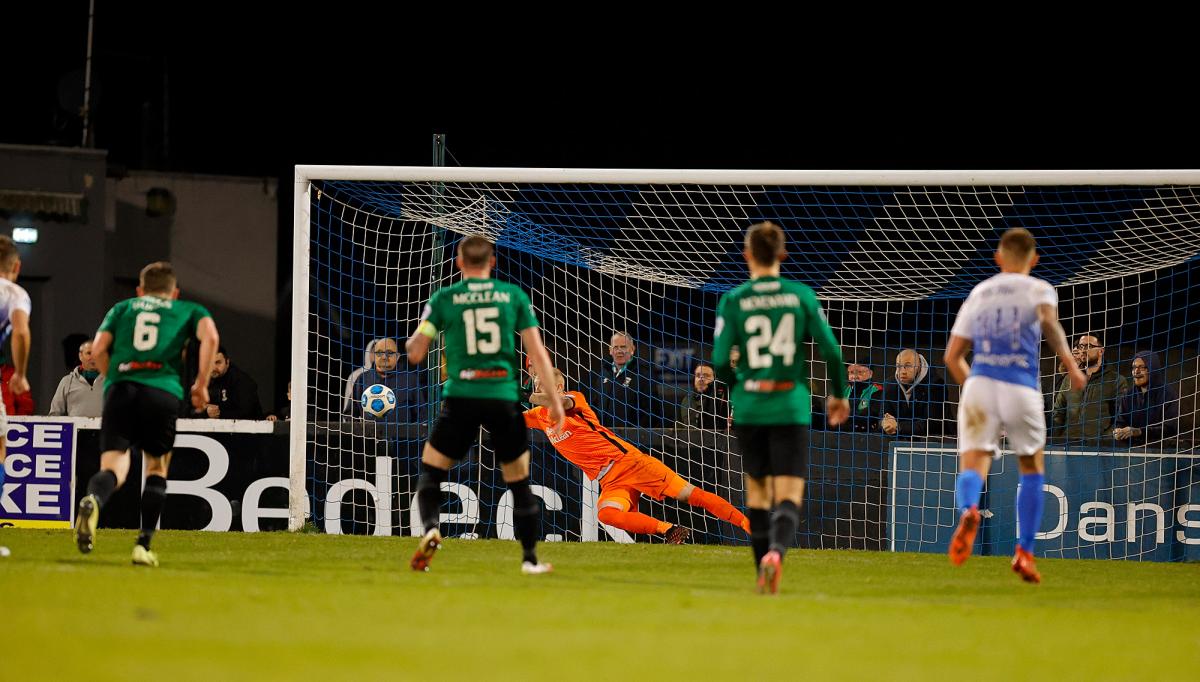 2 minutes into the final period of play Matthew Fitzpatrick fired wide. Then a clearance from Patrick McClean fell kindly for Jay Donnelly, the young Glentoran marksman evading the offside trap before calmly sliding the ball under Taylor to make it 2-1. 3 minutes later a Glentoran corner was cleared to the edge of the area. It fell to substitute Gael Bigirimana and his 30-yard drive brought a smart save out of James Taylor. Andrew Doyle then committed another couple of fouls on McMenamin and Ciaran O'Connor. It's difficult to understand how neither was deemed a cautionable offence - perhaps his earlier booking had something to do with it. He did receive a talking to from referee Andrews but his immediate substitution perhaps suggested that even the Glenavon coaching staff knew the score! 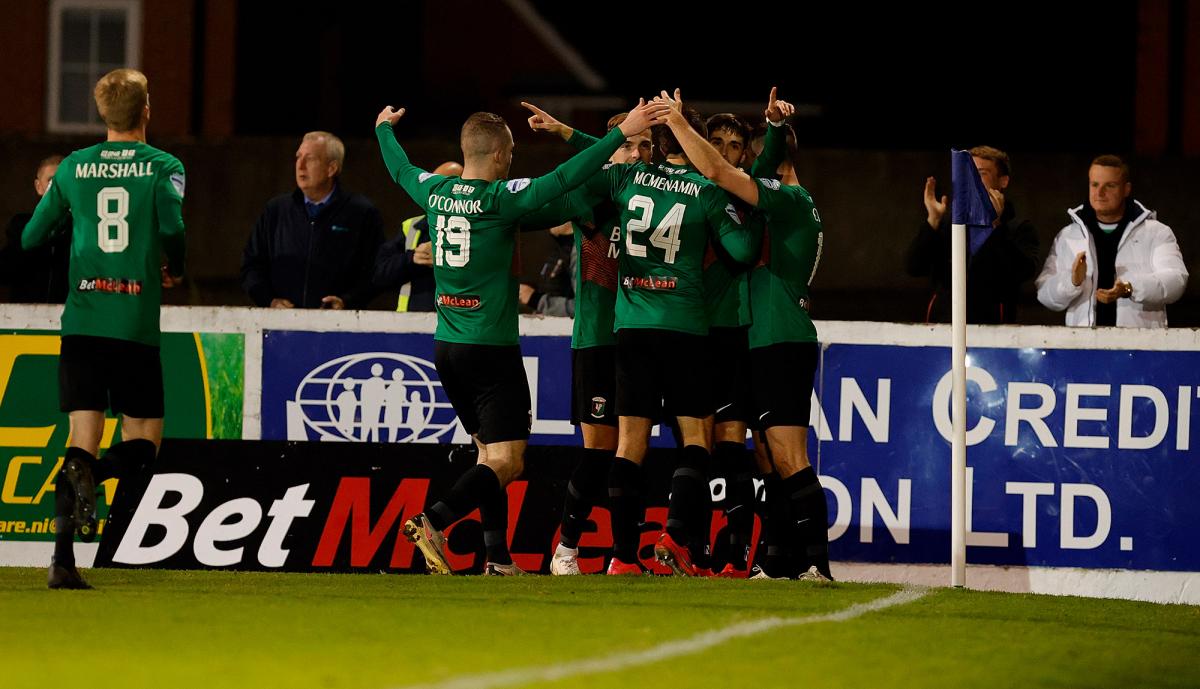 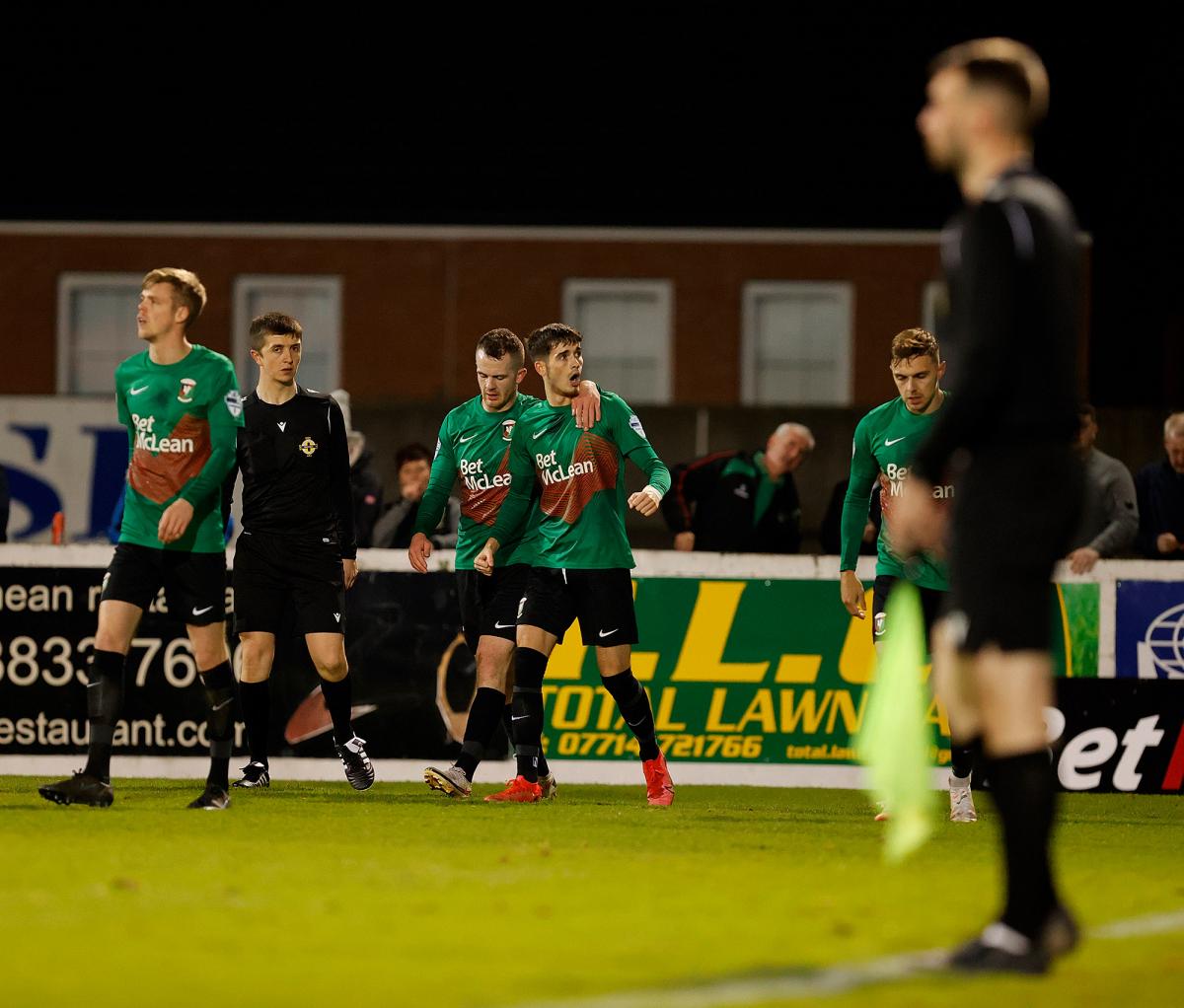 In the final minute of extra time Glenavon equalised. Josh Doyle was given too much time and space on the edge of the Glentoran area but his finish was outstanding, McCarey having no chance on this occasion. 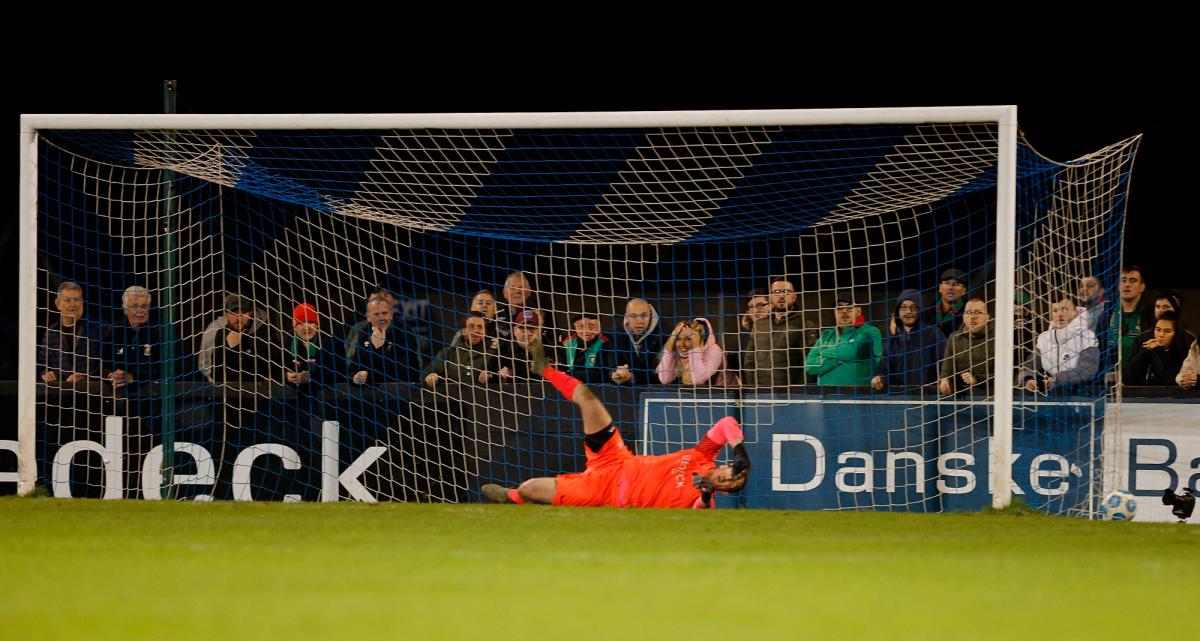 And so to the penalty shoot out. The home side went first with Andrew Hall scoring. Ross Hunter scored their second spot kick but the third, from Josh Doyle was saved by Aaron McCarey. Meanwhile Robbie McDaid, Conor McMenamin and Jay Donnelly all netted for Glentoran to give us a 3-2 advantage. Goalkeeper James Taylor and Robbie Garrett both scored their penalties. Gael Bigirimana also scored but Bobby Burns, with the final Glentoran pen, put the ball over the bar. 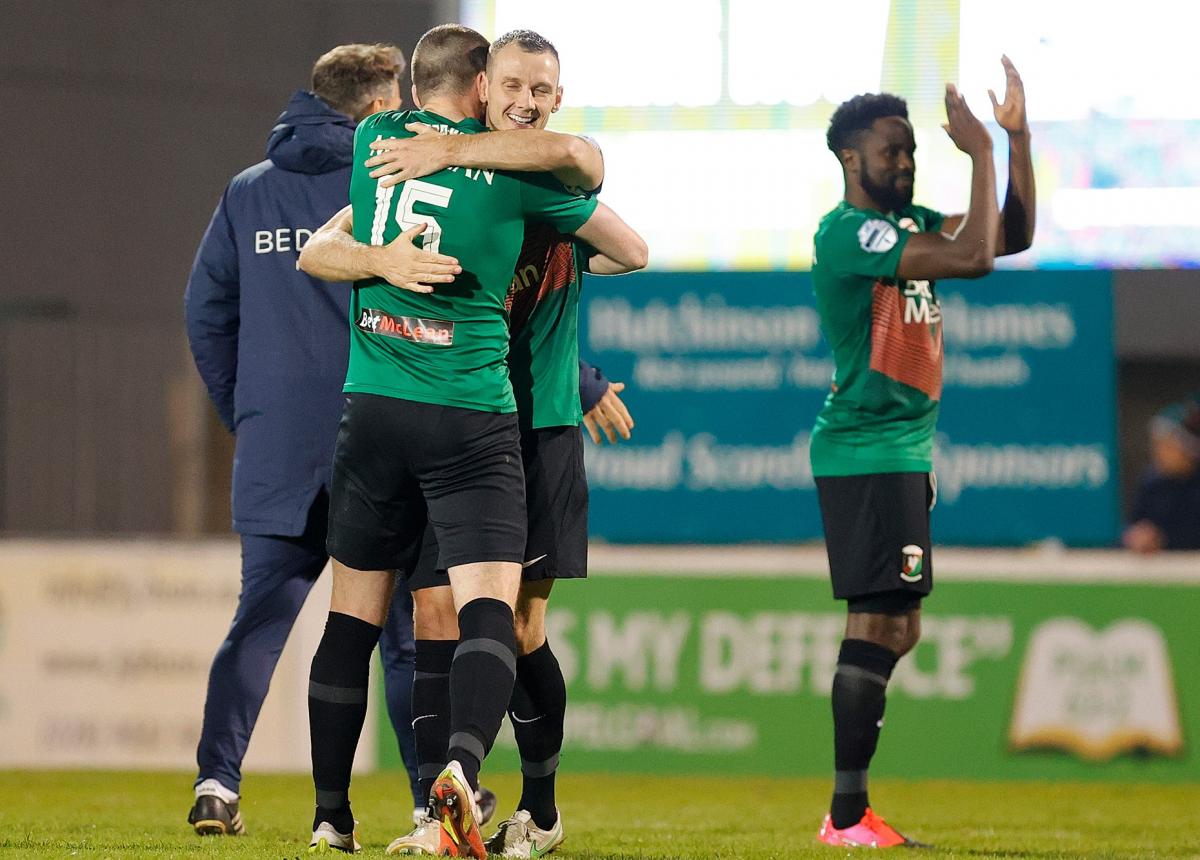 4-4 and we were at 'sudden death'. Jamie Doran struck his penalty well but hit the post. Up stepped stand-in skipper Patrick McClean and his shot, low to the keeper's left hand side, found the bottom corner to put Glentoran into the quarter-final. 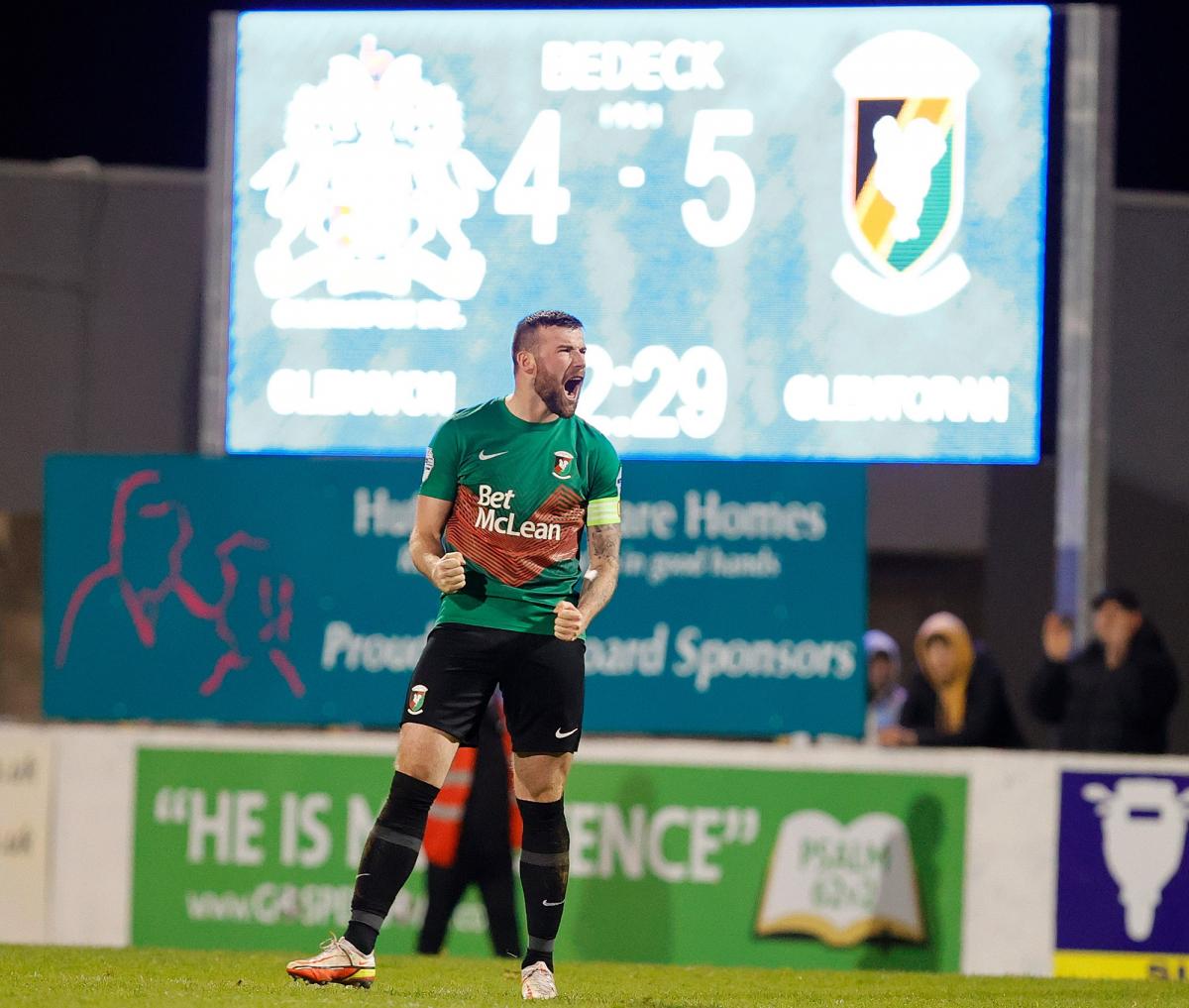