With Gavin Peers serving a one match suspension and Robbie McDaid aggravating an injury in the pre-match warm up, Mick McDermott was forced to make several changes to the starting line up for this crucial game against Dungannon Swifts. 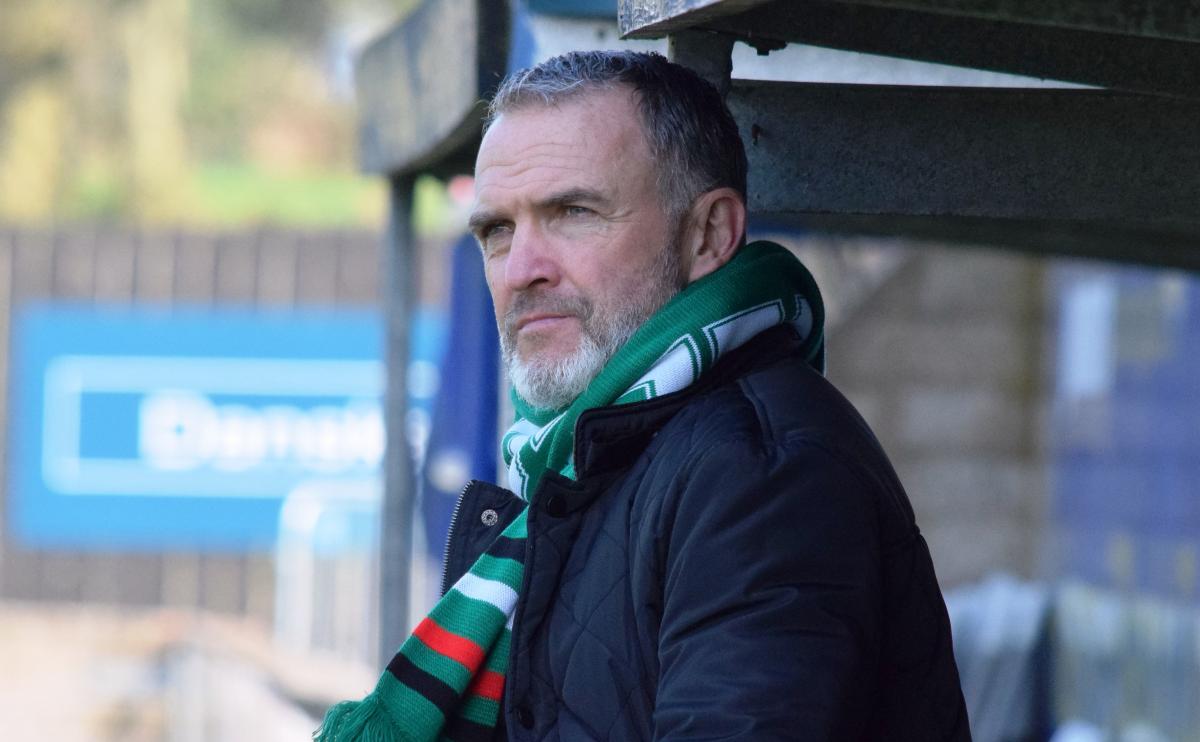 Willie Garrett came into central defence with Steven Gordon moving to left back. Connor Pepper was also back in the starting XI following his hamstring injury.

The Glens went into the game in 7th place but with Institute also on 38 points and Dungannon Swifts just 2 points behind, a win was vital. Glentoran had the first opportunity of the game on 3 minutes when a long ball forward was flicked on by Paul O'Neill into the path of Curtis Allen. Allen's shot was on target but straight at Alex Moore in the home goal. 5 minutes later the Swifts went in front. Daniel Hughes found Paul McIlroy in the area and he turned Glens skipper, Marcus Kane before slotting past Elliott Morris. 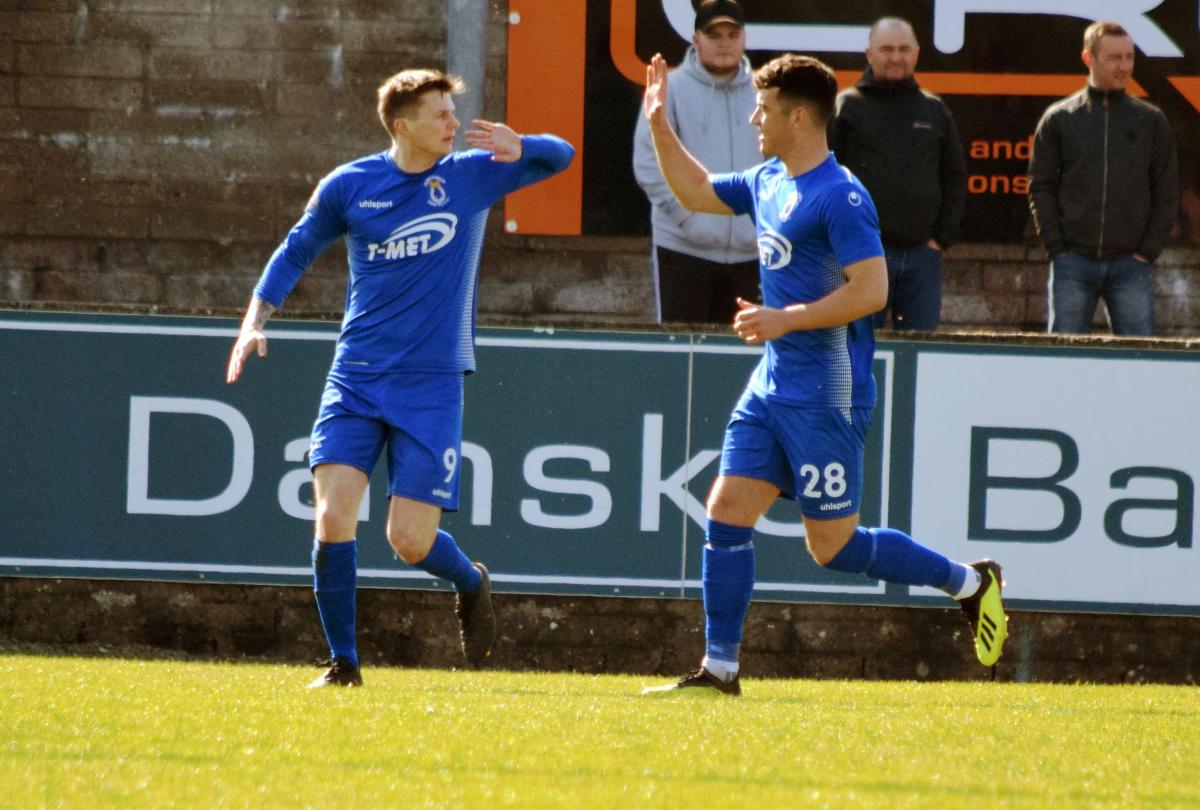 The lead lasted just over 10 minutes though. The Glens won the ball in midfield and the excellent Cricky Gallagher stormed forward before sliding a perfect pass in to Curtis Allen. Glentoran's number 9 met the ball first time and found the bottom corner with his right foot shot. Swifts' striker McIlroy fired over on 21 minutes and then, midway through the half the Glens thought they had edged in front. A Gallagher free kick was headed home by Marcus Kane but his celebrations were strangled as the linesman flagged for offside. 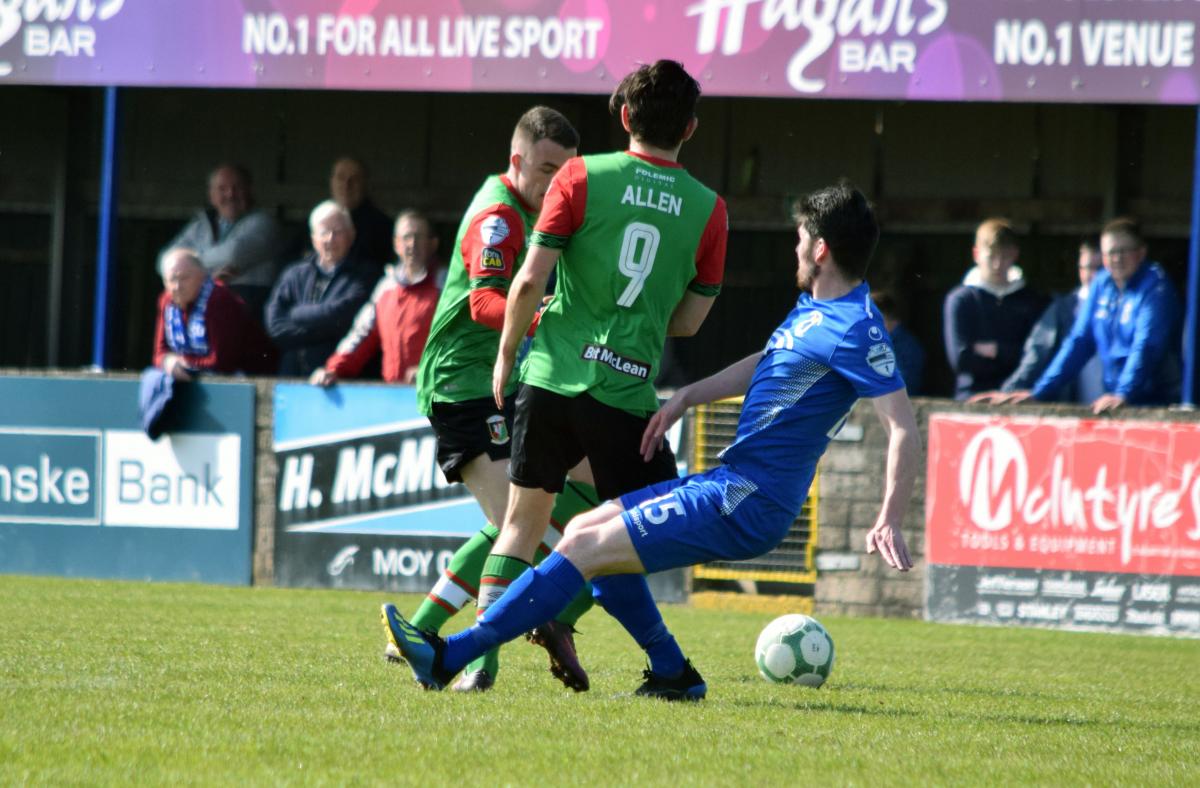 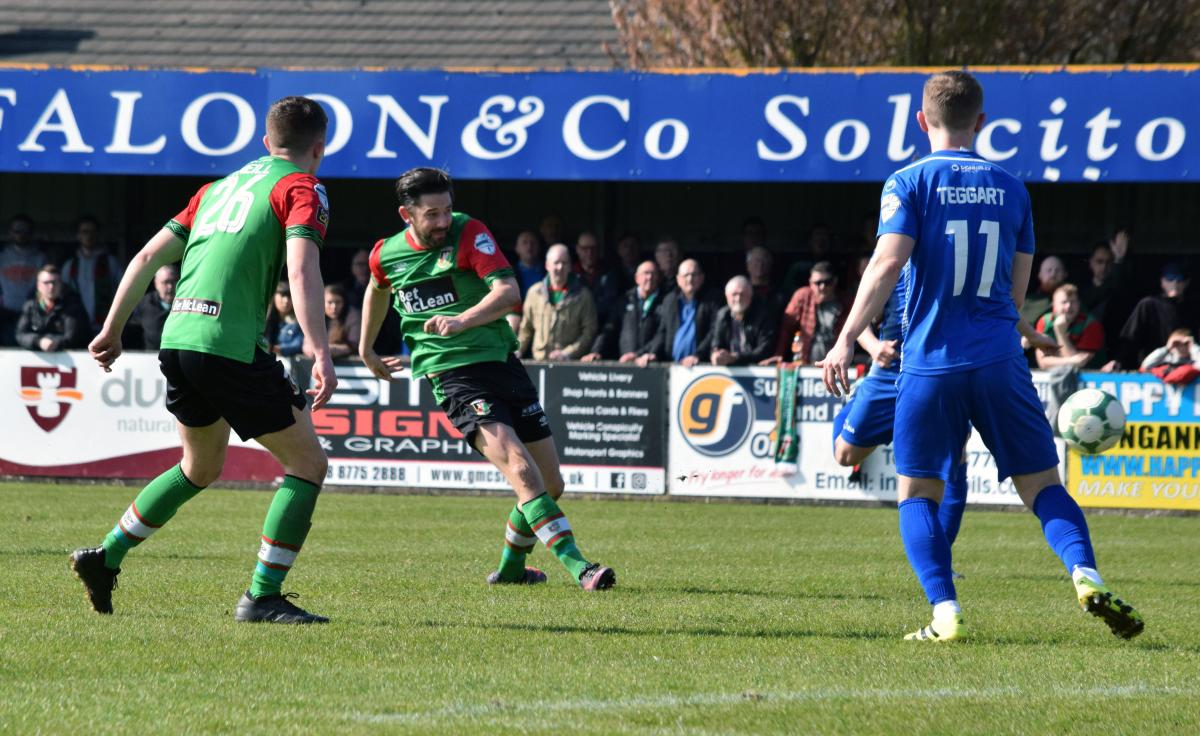 On 34 minutes a really poor tackle by Douglas Wilson on Connor Pepper saw the Dungannon man receive a yellow card. He was perhaps lucky it wasn't a straight red, the challenge being almost identical to that which saw Glentoran's John Herron sent off against Glenavon earlier in the season. From the resulting free kick Gallagher's ball into the area seemed to be going wide but Kane reached it and his overhead kick found Glentoran's 'Player of the Month' for March, Paul O'Neill 8 yards out. O'Neill struck the ball sweetly but was denied his 3rd goal in 3 games by a fine save from Alex Moore. Both side went close as we approached halftime; Curtis Allen picking up a pass from Herron and firing across goal, the ball just missing the far post, before a Swifts free kick played into the danger area was headed narrowly wide by Clucas. 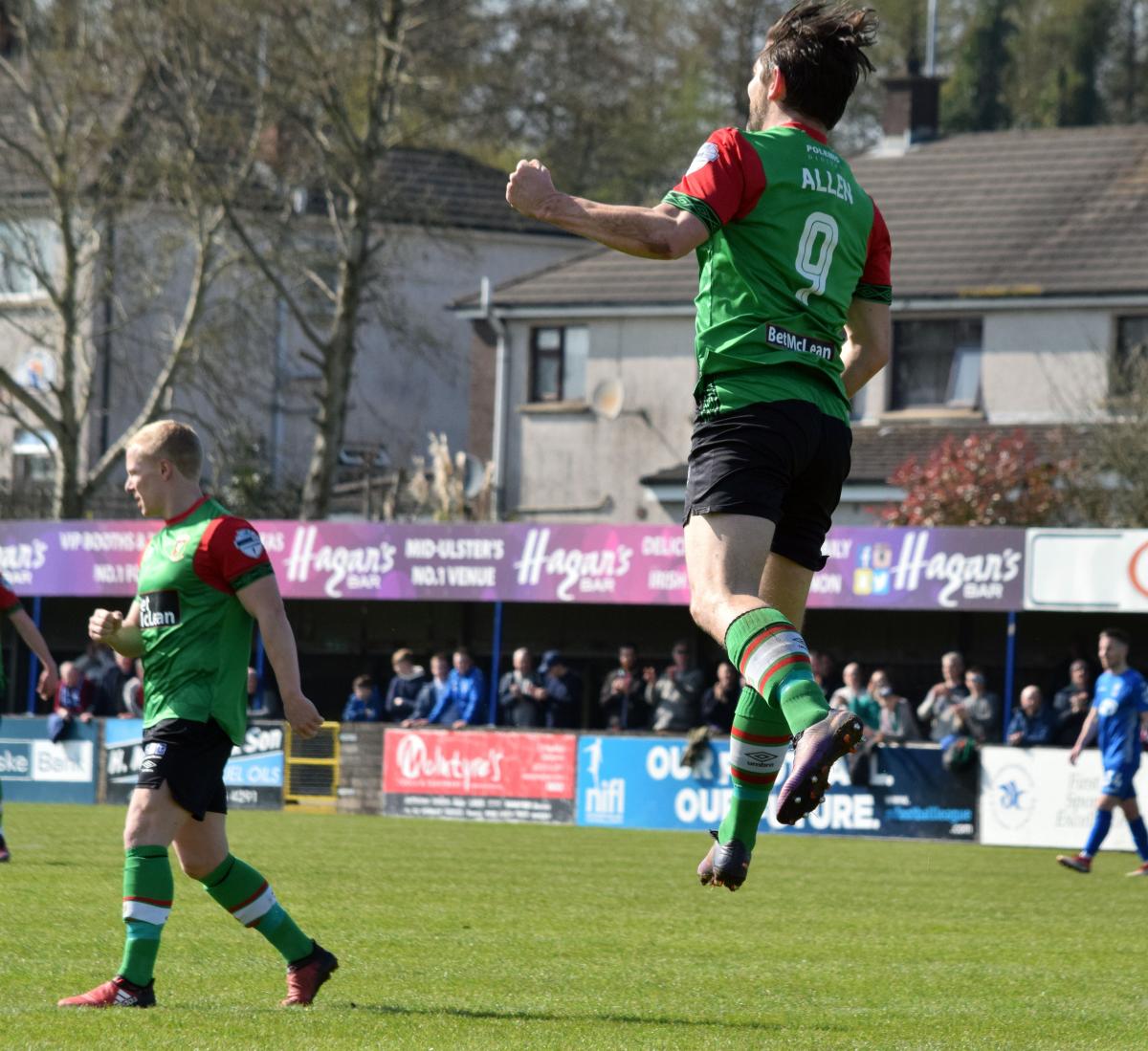 Paul O'Neill had the chance to score a minute after the interval but his stinging shot was blocked by a Dungannon defender. On 50 minutes a McIlroy free kick tested Elliott Morris but the Glentoran custodian got down well to gather the ball and held on despite receiving an unnecessary kick from Michael Carvill. A minute later the home side were reduced to 10 men. John Herron played a one-two with Curtis Allen and as the Scottish midfielder went clear he was taken out by Douglas Wilson. Wilson was given a second yellow card by referee Hunter and headed for the changing rooms. 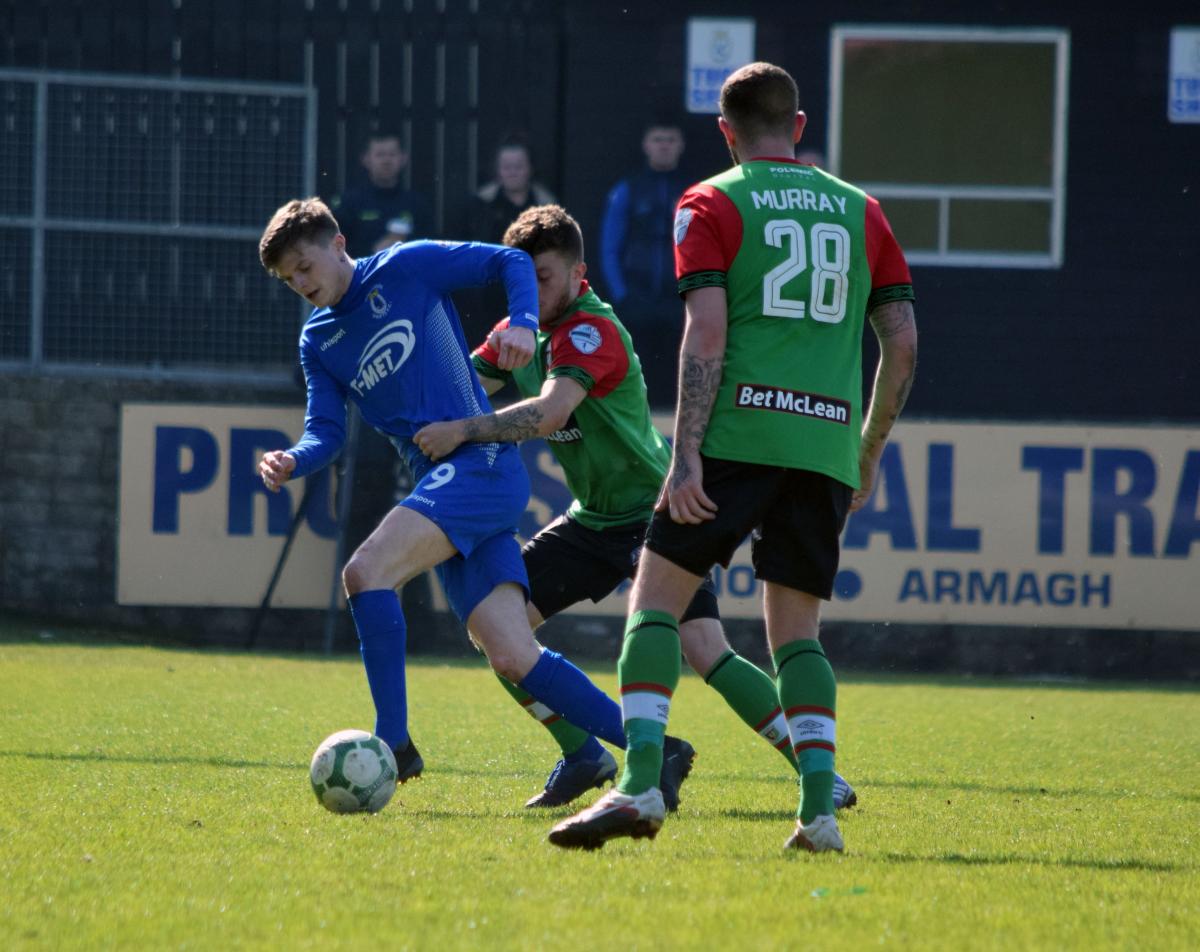 Just before the hour mark a shot from Pepper was blocked but fell kindly for Kane. He controlled the ball superbly but fired just wide of the post. Glentoran's second and ultimately winning goal came on 63 minutes. Chris Gallagher was elbowed by Clucas on the edge of the area, the Swifts defender perhaps fortunate just to collect a yellow card. Curtis Allen's free kick was well kept out by Moore but the ball eventually broke to Darren Murray who smashed it home from 6 yards out. The Swifts might have had a penalty on 72 minutes when Nathan Kerr fouled Lafferty on the edge of the area. Referee Hunter though adjudged that the offence had taken place just outside the area; the Dungannon Swifts players adamant that it was inside. The resulting set piece was well defended by the Glentoran wall. 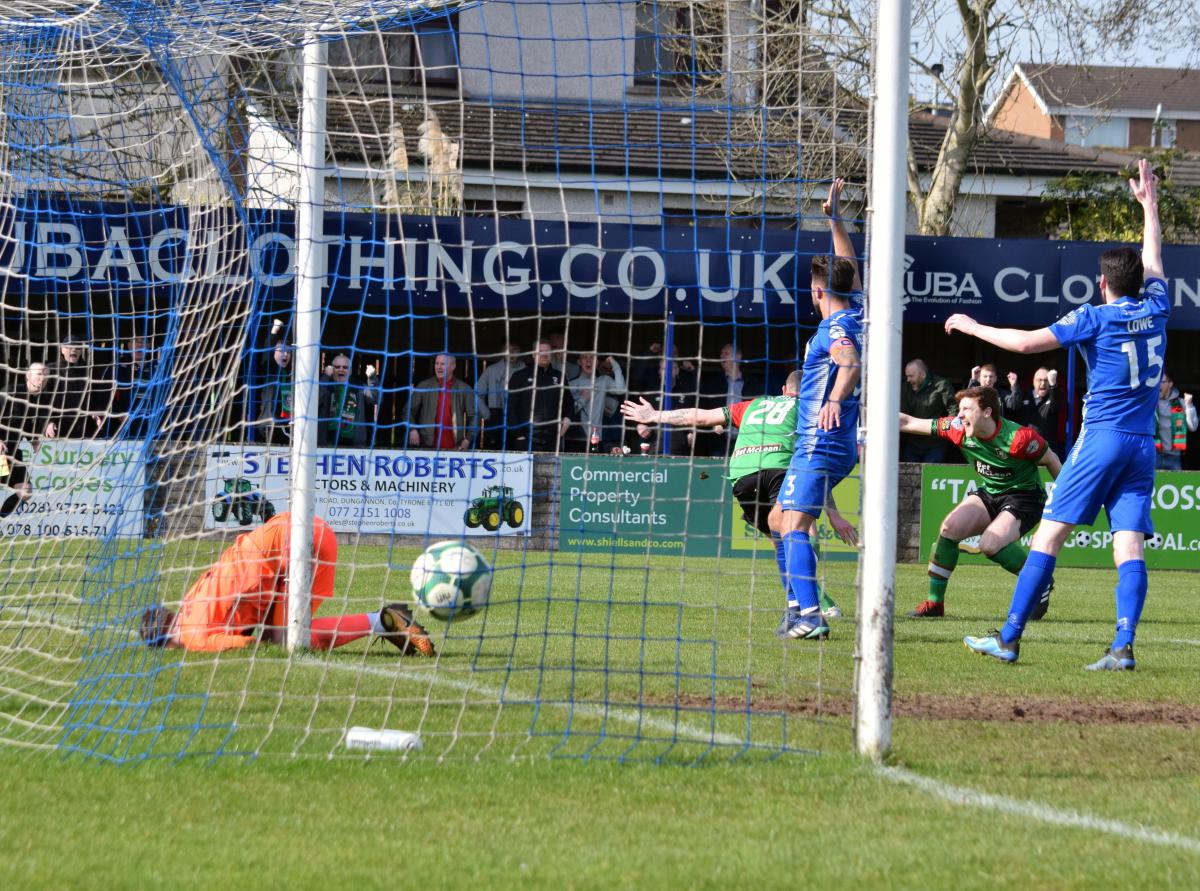 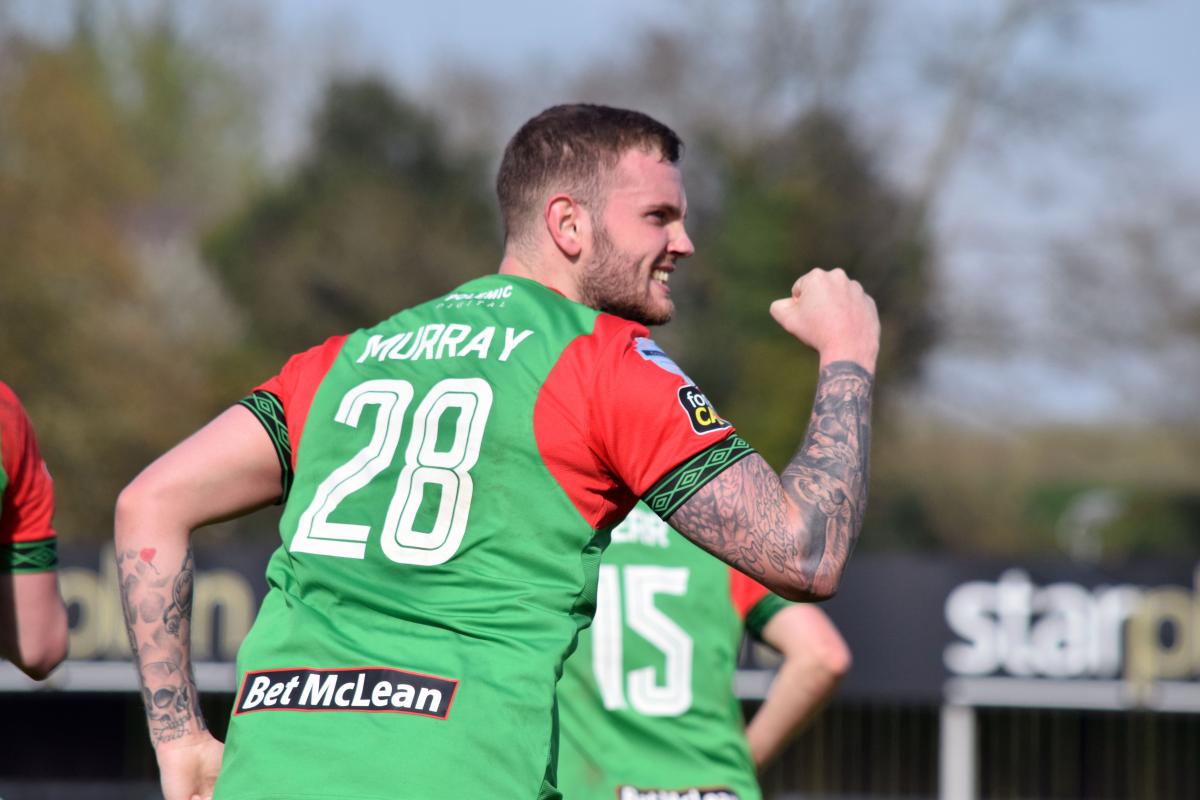 With 15 minutes remaining the Glentoran players and supporters were furious when a brutal tackle on Cricky Gallagher in the centre circle went completely unpunished. Indeed it was hard to see how none of the 4 officials could have missed it! Fortunately Gallagher was able to continue after lengthy treatment. In the dying minutes John Herron almost made it 3-1 but after showing some delightful skill in the Swifts' penalty area, his effort hit the crossbar. 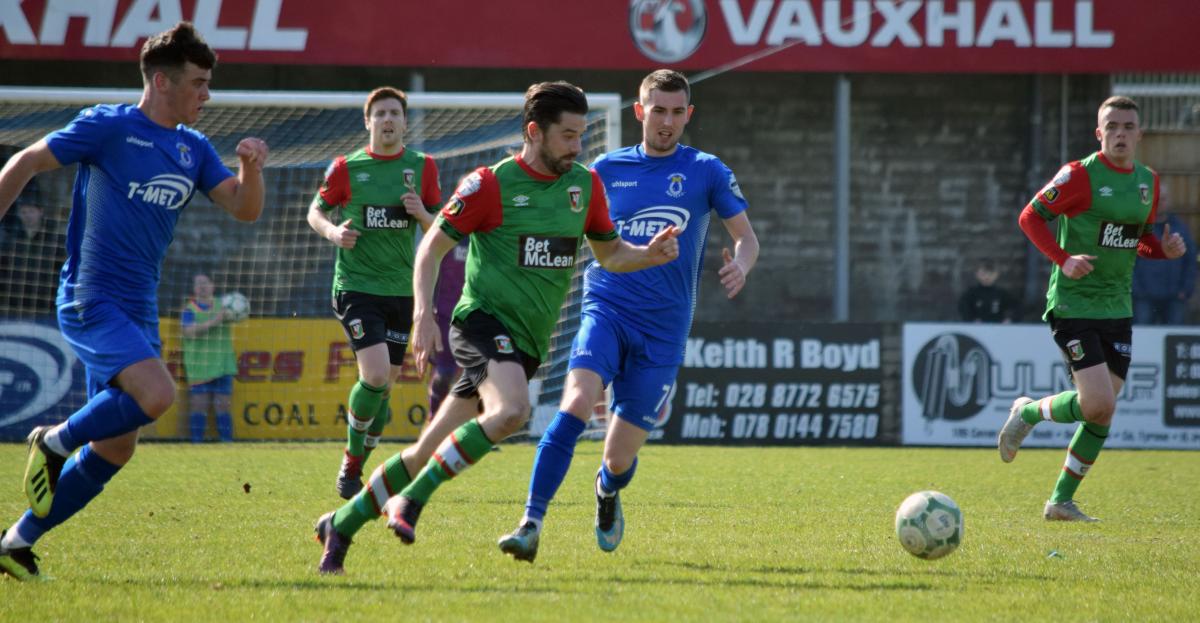 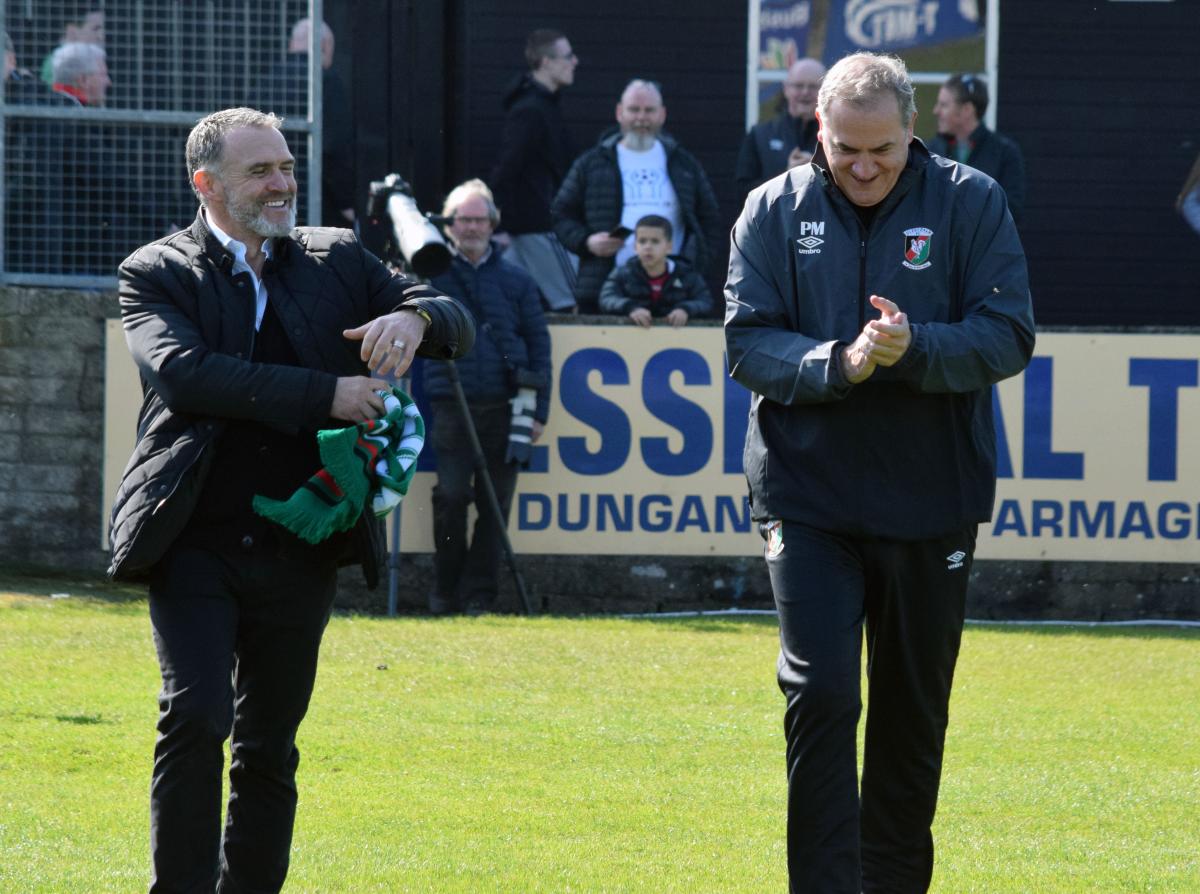 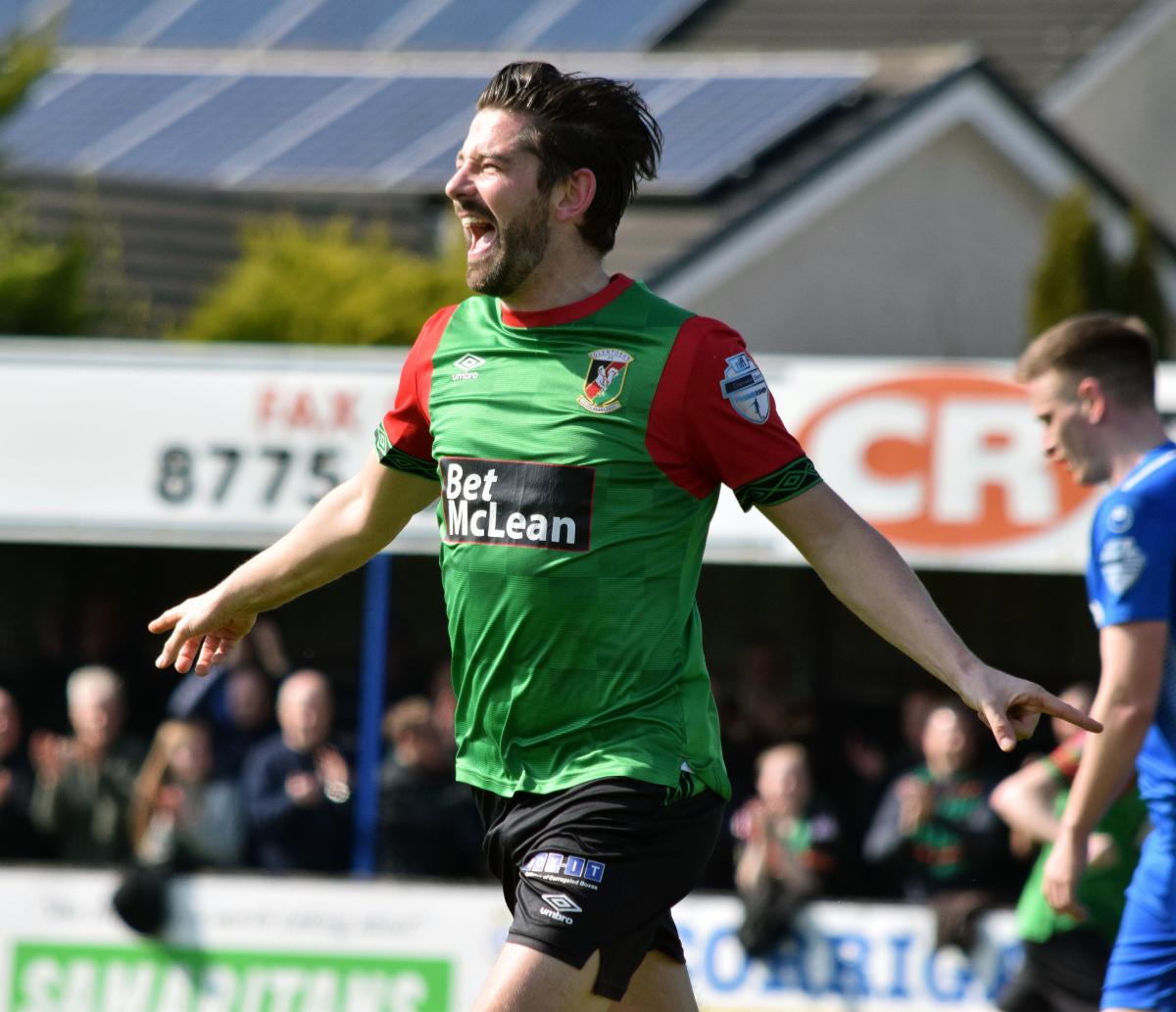