Jonny Smith’s 90th minute penalty was enough to secure Glentoran’s first league win in 8 games and give Gary Haveron his first 3 points since taking charge. Glentoran were unchanged from last weekend’s draw with Ballinamallard Utd as they travelled to Stangmore Park to take on a confident Dungannon side who had score twelve goals in the space of a week. This was the first game of the second round of fixtures in this season's Danske Bank Premiership; the two sides met on the opening day of the season when Ciaran Caldwell scored the only goal of the game. 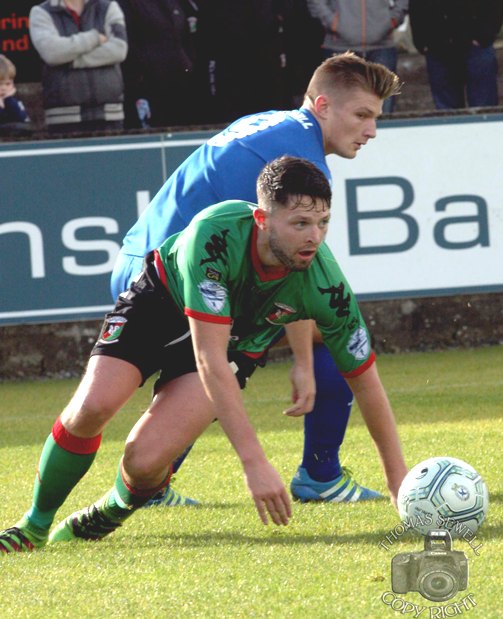 The torrential rain of the early afternoon subsided just in time for the kick off of what turned out to be a cagey first half. Eric Foley’s long range drive was the only noteworthy attempt on goal in the first fifteen minutes, it was comfortably dealt with by Andy Coleman in the home goal.  Throughout the first half it was clear that Dungannon were intent on targeting Glens right back James Ferrin. Highly rated striker Andy Mitchell spent most of the half wide on the left but Ferrin handled him superbly all day, not offering the young hotshot an opportunity. Dungannon did managed to carve a few openings through weight of numbers down the left but Glackin and O’Rourke couldn’t produce crosses to match the neat build up play.

On the half hour mark Andy Coleman produced a fine double save to deny the Glens the lead. Curtis Allen’s cross was controlled by Caldwell whose shot looked destined for the top corner but Coleman did well to save it and subsequently react to deny Stevie Gordon who was following up. Shortly afterward the Glens threatened down the left, Ross Redman put in a threatening cross which was only half cleared, but Curtis Allen flashed the loose ball over the bar.

The Swifts will have been disappointed with their first half performance but came out flying in the second, early on Chris Hegarty rattled the Glentoran crossbar as he rose to meet a Glackin corner. The introduction of former Portadown winger Peter McMahon seemed to spark the Swifts further but despite enjoying plenty of possession they couldn’t threaten Morris in the Glens’ goal; a Mitchell header wide the closest they came. Glentoran then grew into the half, Curtis Allen went close with a snap volley right at Coleman, the striker unlucky as had it been either side of Coleman it would have surely been a goal. With 25 minutes to go it was Glentoran’s turn to hit the woodwork, Lavery’s looping corner was headed onto the top of the bar by Ferrin. Following this chance Glentoran manager Haveron made a double change with Novo and Smith replacing Allen and Caldwell, Smith was perhaps unlucky not to start following his impact sub performance last weekend but he would prove to provide the decisive moment this afternoon. Glentoran continued to press but struggled to land the decisive blow, Smith struggled to clear a path for a shot following great work by Lavery and Foley as sheer numbers crowded the young striker out. His strike partner Novo was then denied as Chris Hegarty just got his head to clear Redman’s cross as Novo waited to pounce. Redman was again at the thick of the action with a good surging run which was well defended, Ross was furious to be booked for simulation for falling to the ground in an incident that looked to be neither a foul nor a dive. Jonny Smith was next to threaten with a low drive that was tipped round the post with 15 minutes to go. At that point it looked like a frustrating draw was on the cards as a series of crosses and corners were well dealt with but in the 90th minute the breakthrough came, Smith was played in behind the defence and tried to round Coleman who brought him down. Referee Crangle pointed to the spot and Smith himself grabbed the ball and dispatched the penalty giving the Glens a vital win. Indeed it almost got better for the Glens as keeper Coleman was dispossessed outside his area by Lavery in stoppage time but the winger was somehow adjudged to have fouled the keeper despite merely shielding the ball before what would have surely been the second. However it didn’t matter as Glentoran held on to claim a deserved and vital win. The relief and delight clear to see at the final whistle. Next up for Gary Haveron’s men is the visit of Cliftonville next Saturday as we look to build on today and progress up the table. 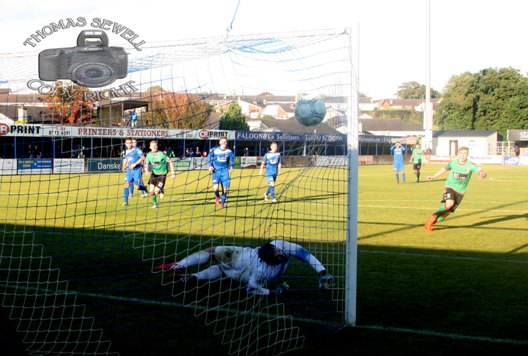