Glentoran survived a late second half fightback to book their spot in the next round of the Samuel Gelston's Whiskey Irish Cup. Leading 2-nil at the break it was quite comfortable for the East Belfast men but when Dergview equalised with just 7 minutes remaining extra-time loomed. However a spectacular goal on debut for midfielder Sean Murray less than 2 minutes after Dergview's leveller saw the Glens emerge victorious. 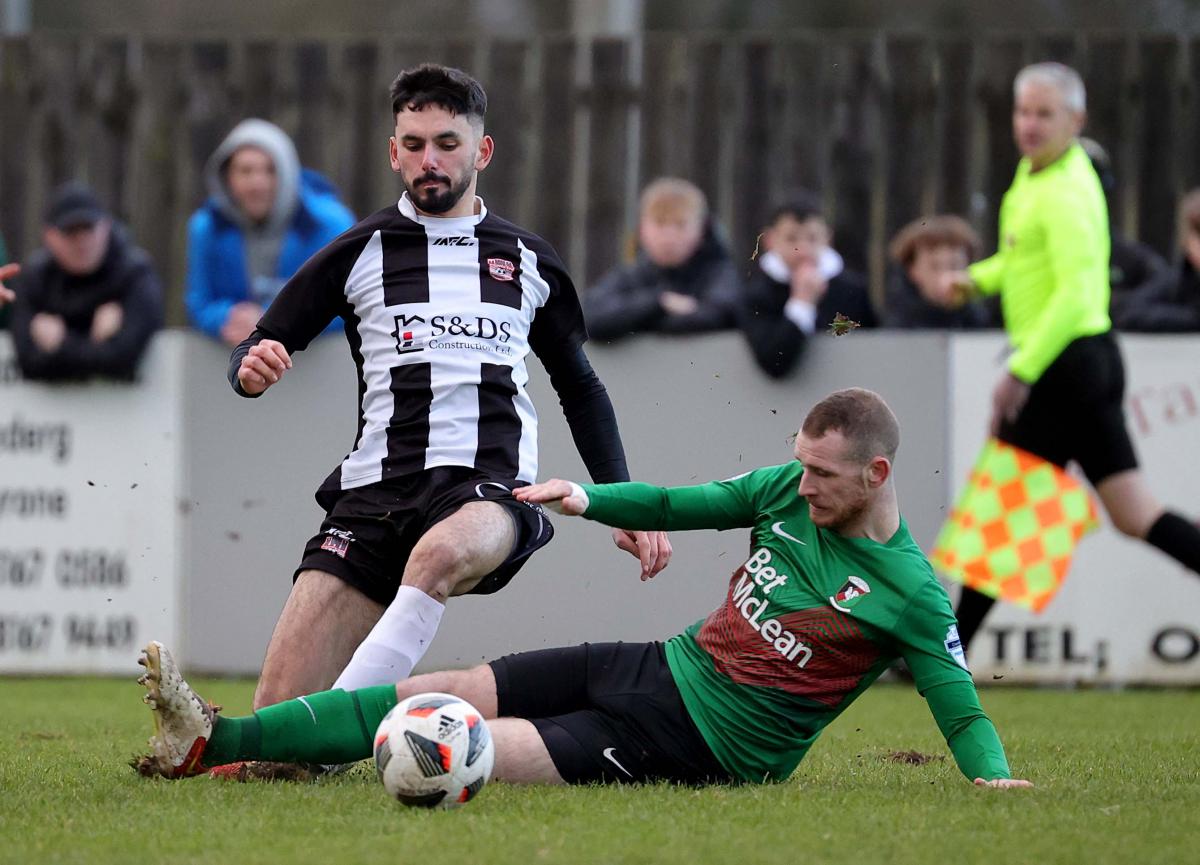 Robbie McDaid and Joe Crowe were back in the starting line up for this game with recent signings, Sean Murray and Michael O'Connor on the bench. With the exception of the suspended Conor McMenamin it was pretty much the strongest Glentoran side available. Conditions were extremely difficult; frequent rain showers having left the pitch heavy. The home side were awarded an early free kick when Joe Crowe was penalised for a foul. Matthew Kirk took the set piece but Aaron McCarey saved comfortably. 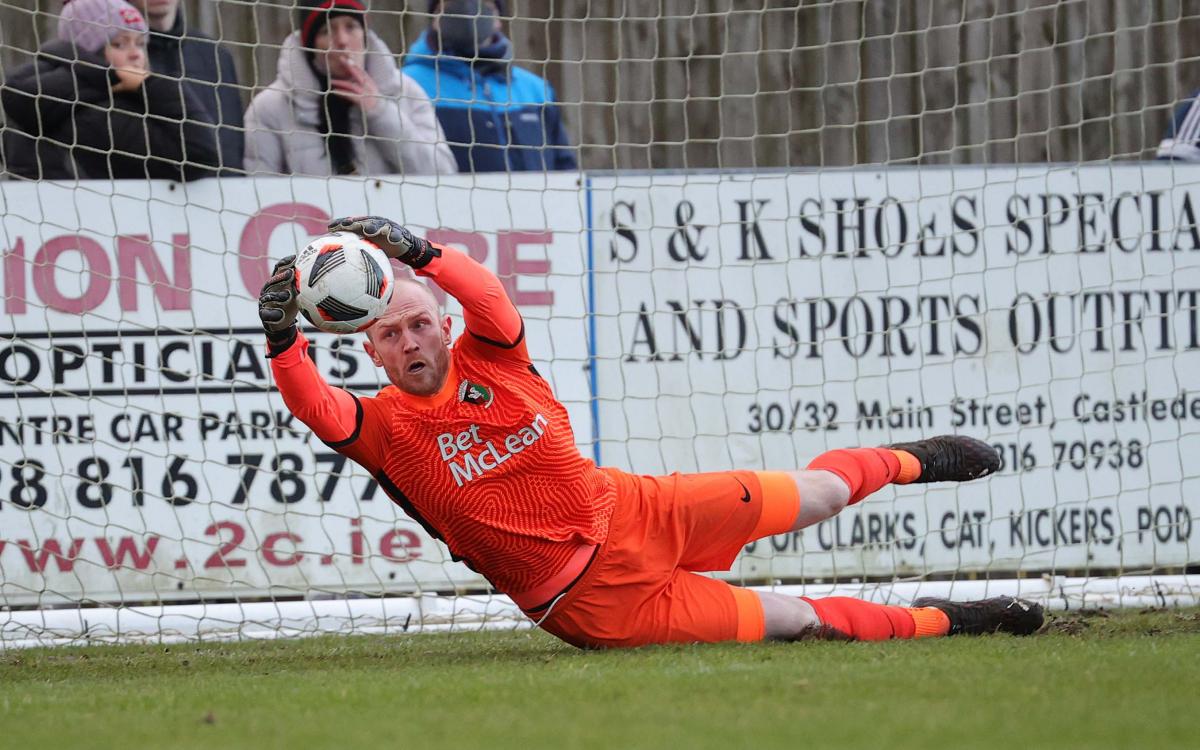 Glentoran edged in front on 9 minutes. Robbie McDaid was fouled on the left. Shay McCartan swung the ball into the 6-yard box and it seemed to get a slight touch off Seanan Clucas before falling to Robbie McDaid who bundled it over the line from close range. The Glens almost grabbed a second 2 minutes later when Rhys Marshall found Shay McCartan on the edge of the area but his shot flashed wide of the target. 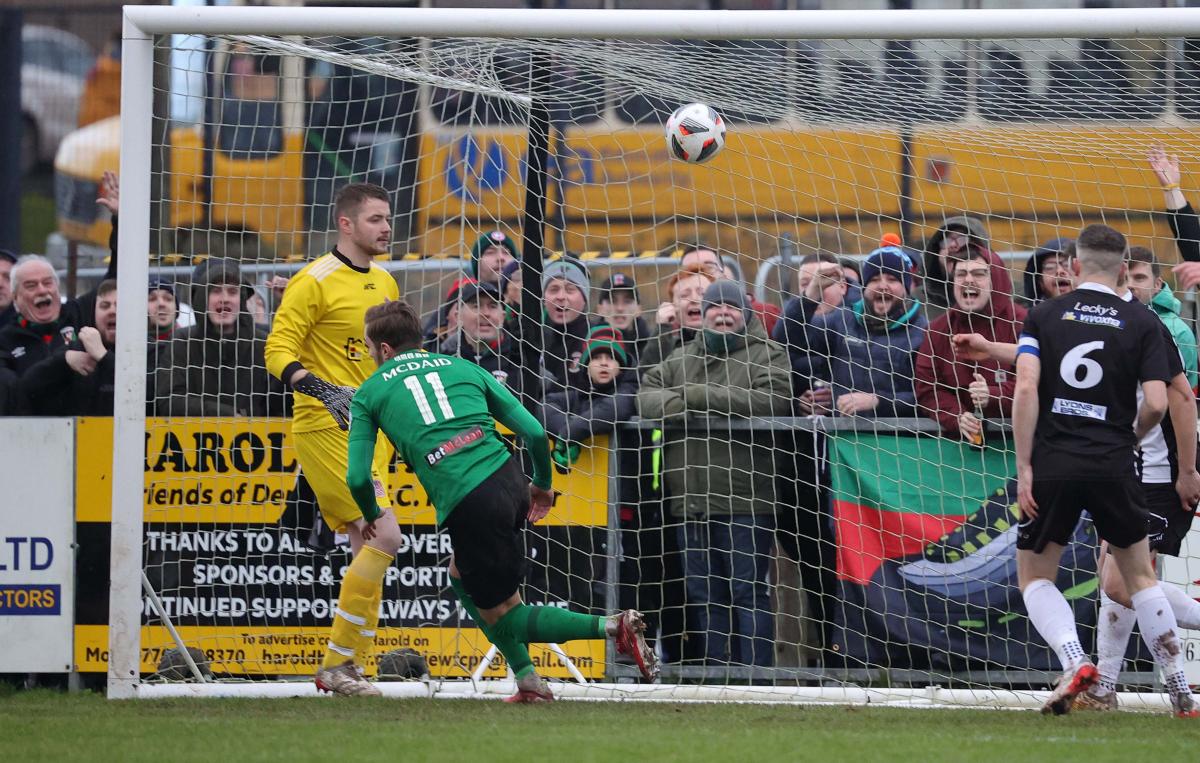 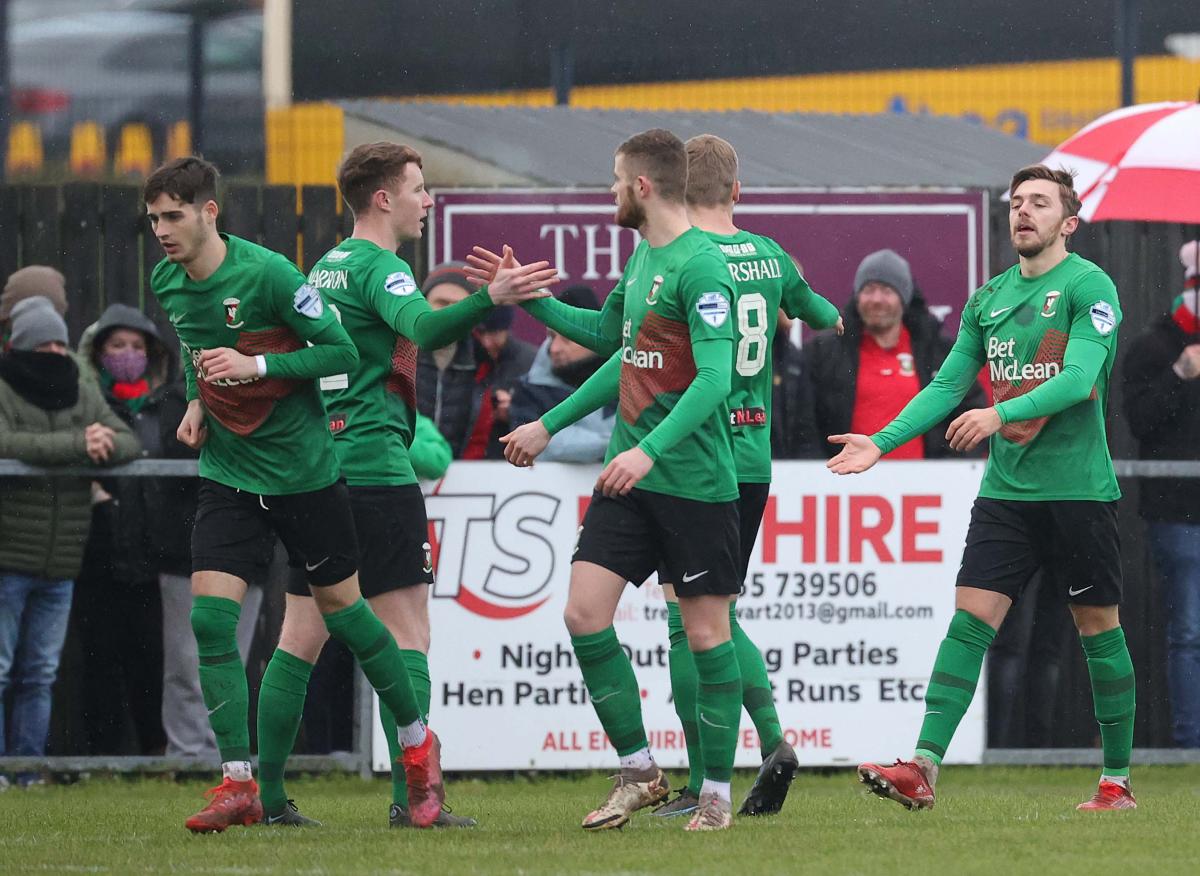 A foul on Bobby Burns gave Shay McCartan the opportunity to put another ball into the danger area. Alan Buchanan in the home goal punched it clear but only as far as Rory Donnelly who was unlucky with a curling effort that was inches wide of the post. Midway through the first half Bobby Burns put in a good cross from the left. Robbie McDaid contorlled the ball before flicking it to Jay Donnelly but he didn't make a great connection and the ball drifted wide. On 28 minutes the Dergview keeper almost gifted the Glens a second goal. Rhys Marshall's attempted cross turned into a shot which the keeper spilled and was fortunate to see the ball clip the top of the crossbar and go behind for a corner. Seanan Clucas got on the end of the set piece but his shot was wayward. 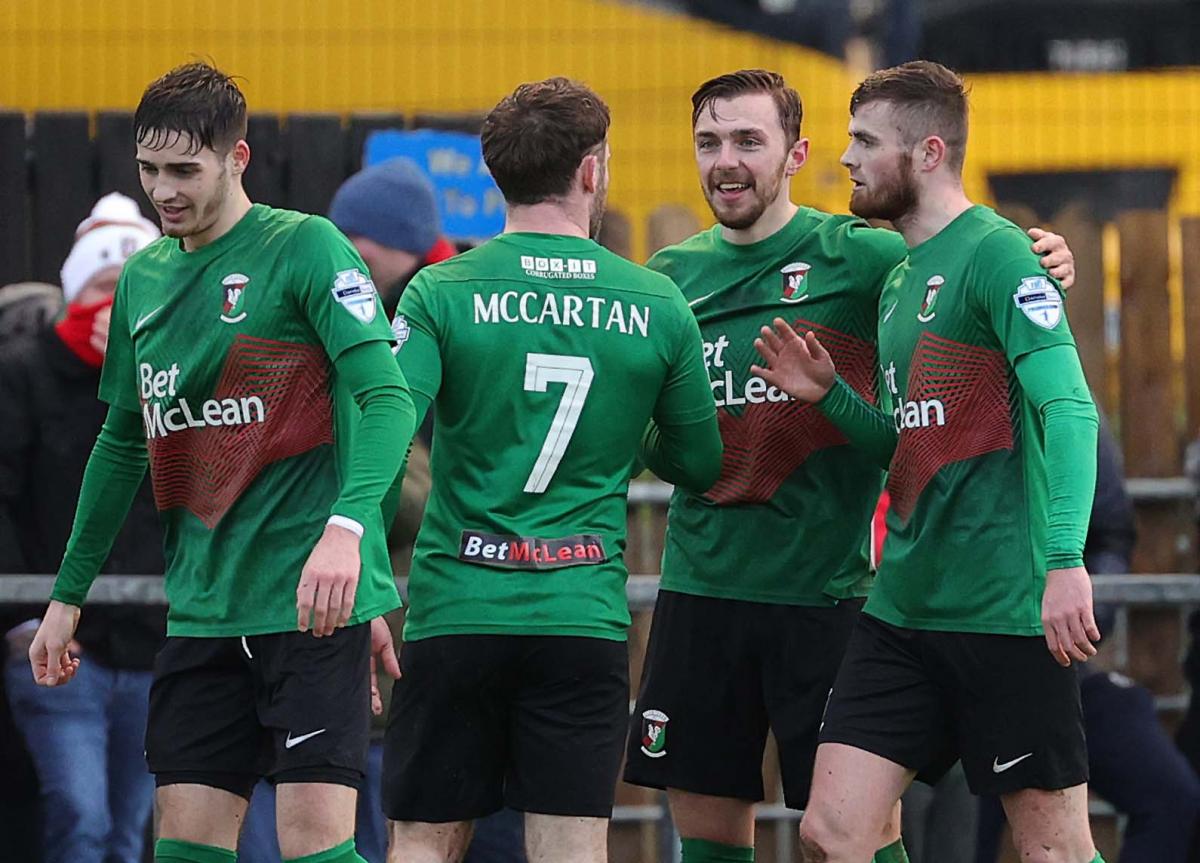 On the half hour mark Glentoran doubled their advantage and again it was Robbie McDaid with the goal. Again it was Shay McCartan creating the opportunity, driving forward before setting up McDaid who curled a beautiful shot beyond the helpless Buchanan for his 6th of the season. Shay McCartan then went close himself with a dipping left footed shot from just outside the box whilst at the other end, following a free kick to the home side, Cathal Farren fired wide of McCarey's goal. Dergview had another couple of opportunities as the first half drew to a close. Matthew Kirk was felled on the edge of the area. he took the free kick himself but curled it wide of the post. Then Niall McGinley tried his luck from around 25 yards but his effort lacked power and was easily gathered by Aaron McCarey. 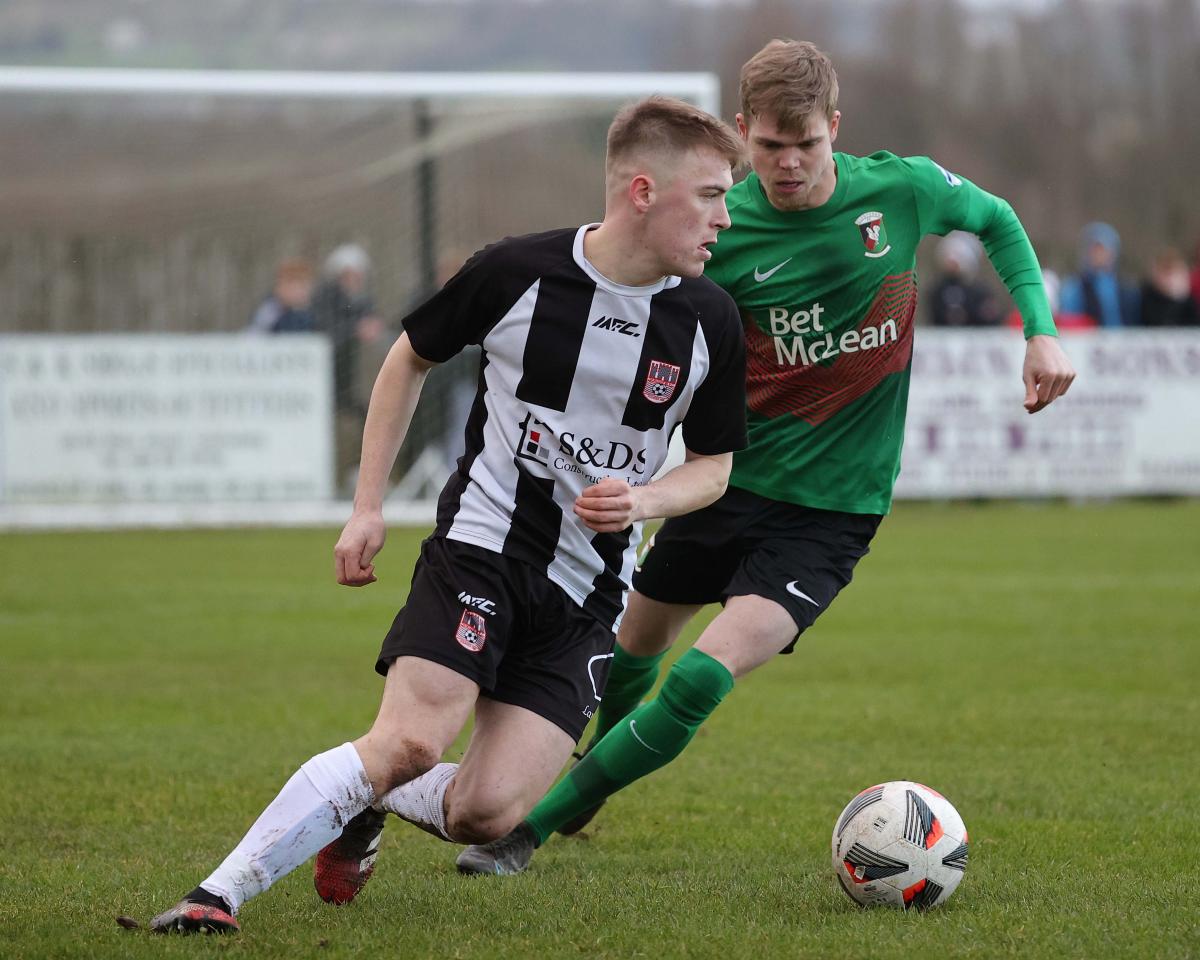 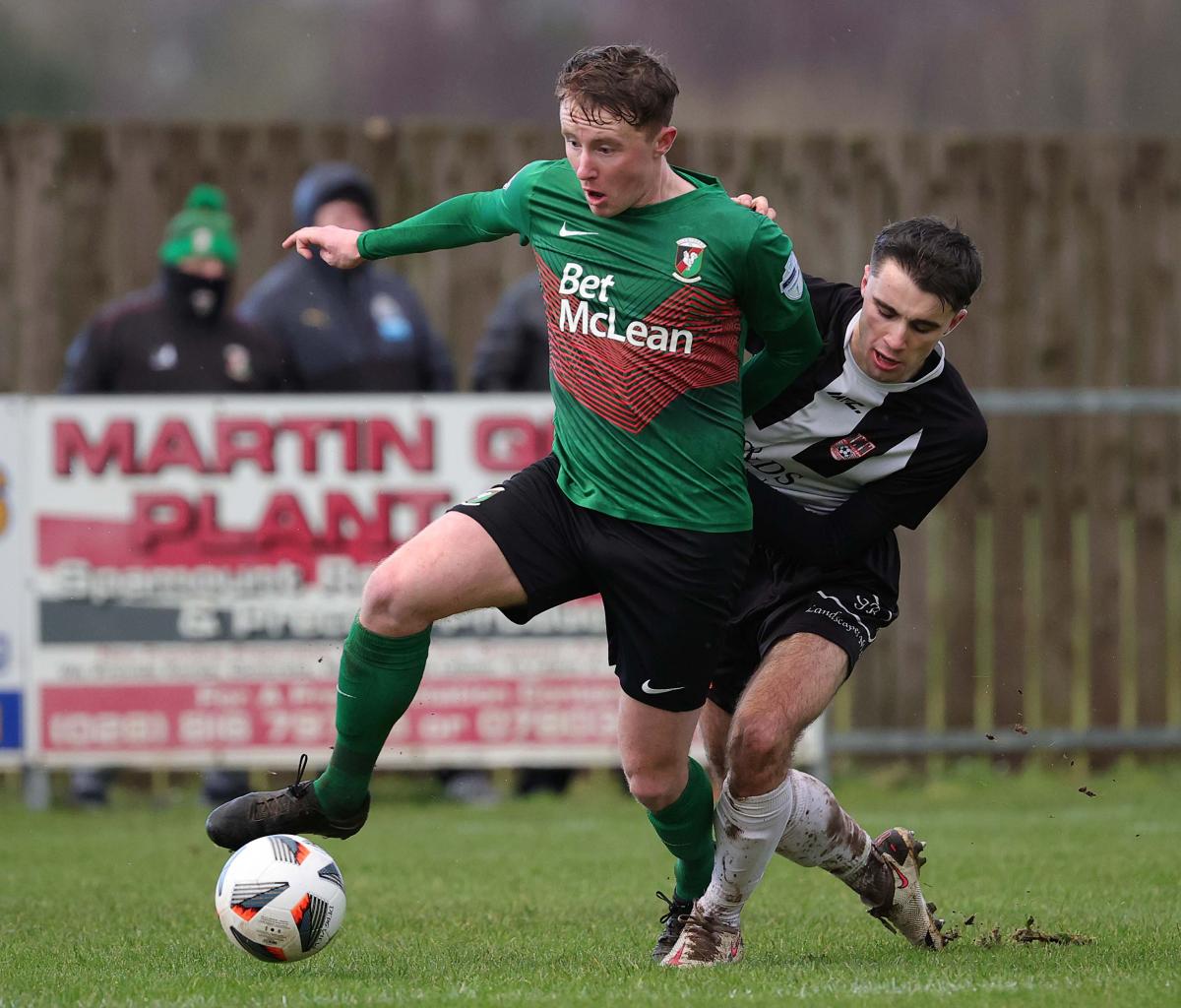 They say 2-nil is the most dangerous scoreline in football - it may be an old cliche but it certainly proves to be the case on many, many occasions. Glentoran needed a third goal to make things more comfortable and had the chance to grab it early in the second half when Shay McCartan's free kick into the penalty area was met by Jay Donnelly but unfortunately the striker's header was just wide. Dergview almost pulled a goal back on 51 minutes following a slip by Bobby Burns which allowed Jamie Browne in on goal. The Glens' keeper Aaron McCarey kept him out though, saving well with his legs. 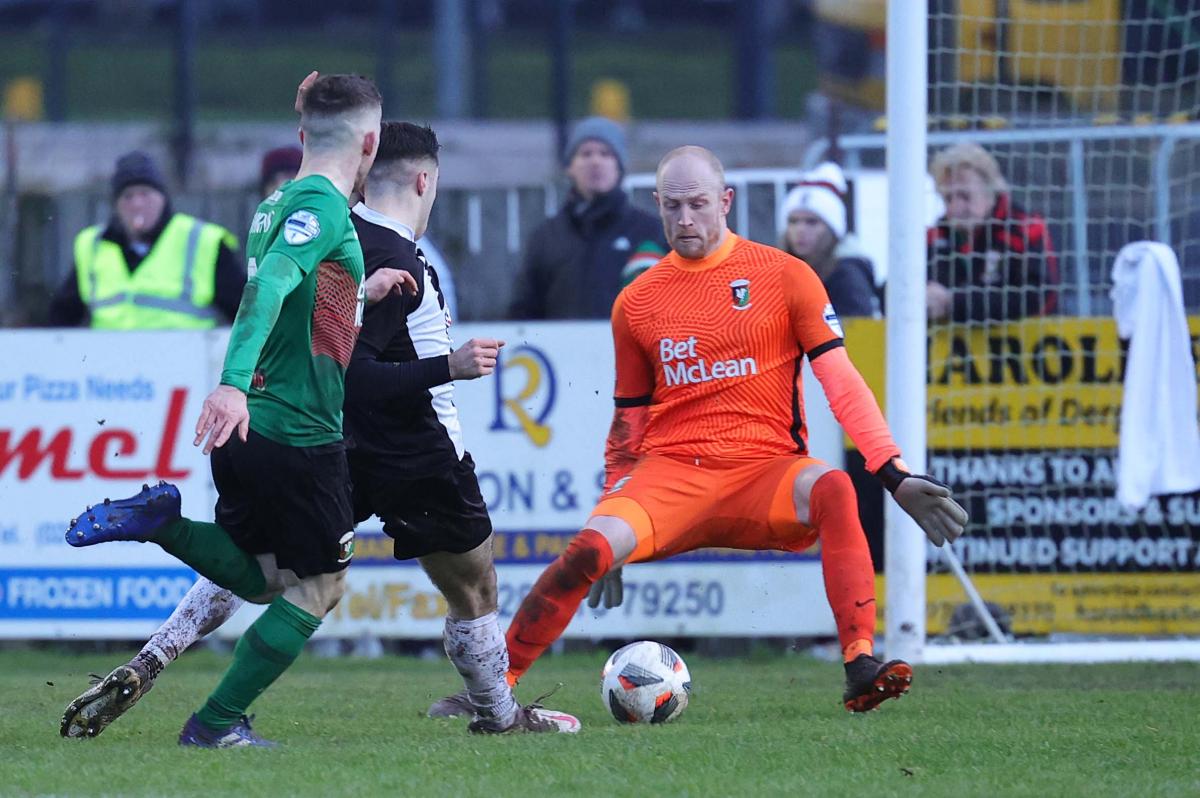 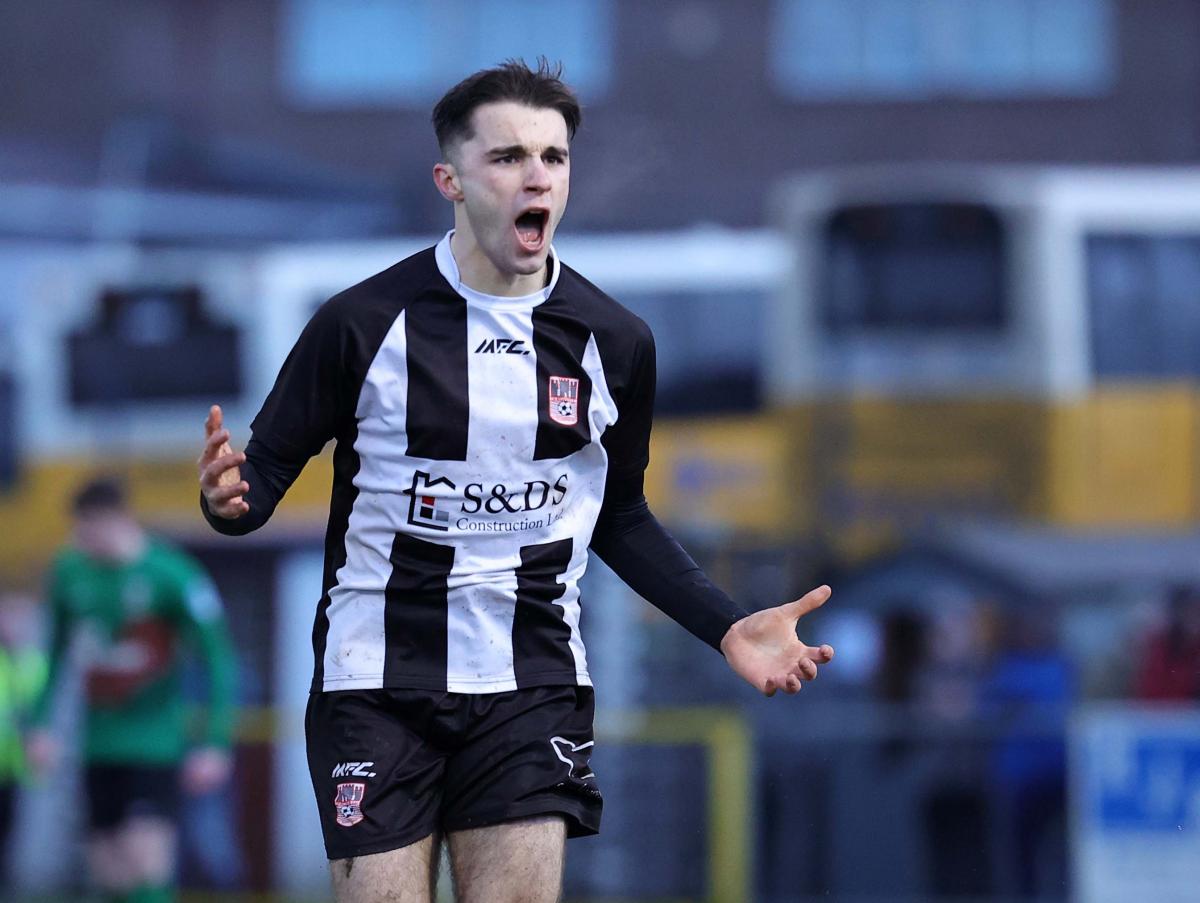 Just 3 minutes later though the Glens were caught out by the same player in the same area of the pitch. A long hopeful ball from Niall McGinley on the halfway line, went between Glentoran's Paddy McClean and Bobby Burns. Browne ran on to it before calmly slotting the ball through McCarey's legs and into the net. Game on! Browne might have levelled things up on 62 minutes. A corner from their right was met by Browne at the near post and his flicked header was just off target. The home side were growing in confidence and pushing for an equaliser; most of their better efforts coming from set pieces. From one such attack, Seanan Clucas got in a superb block on the edge of the area to preserve the Glentoran lead. 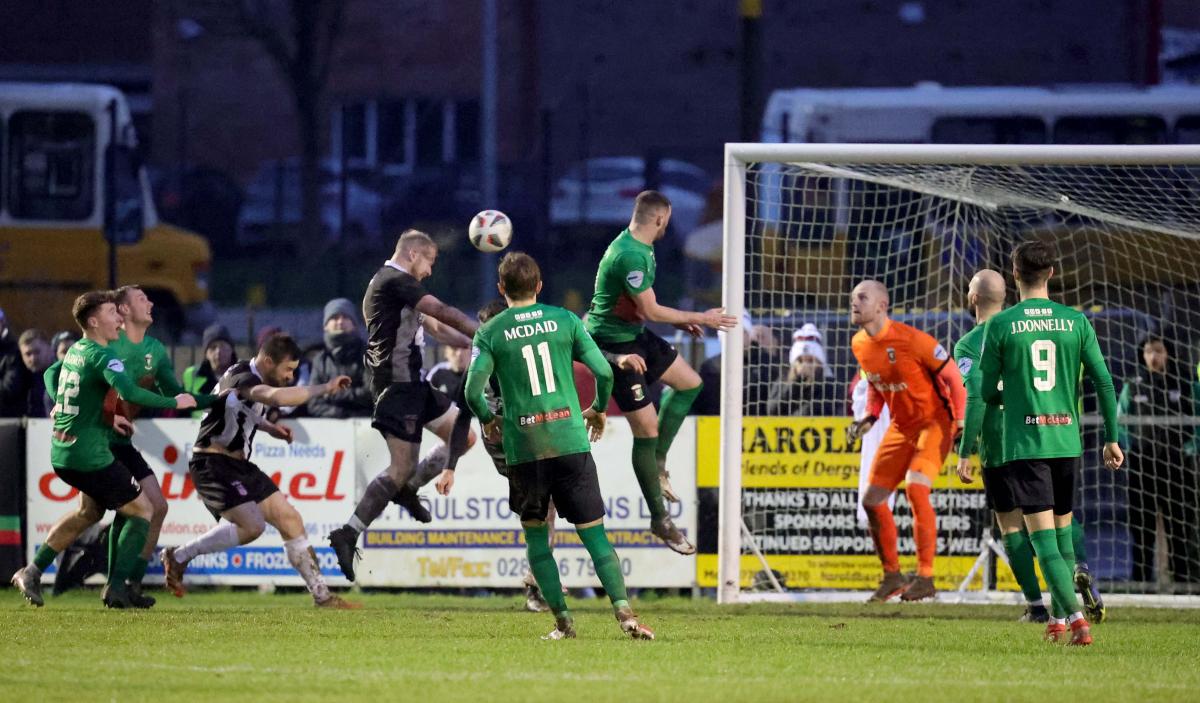 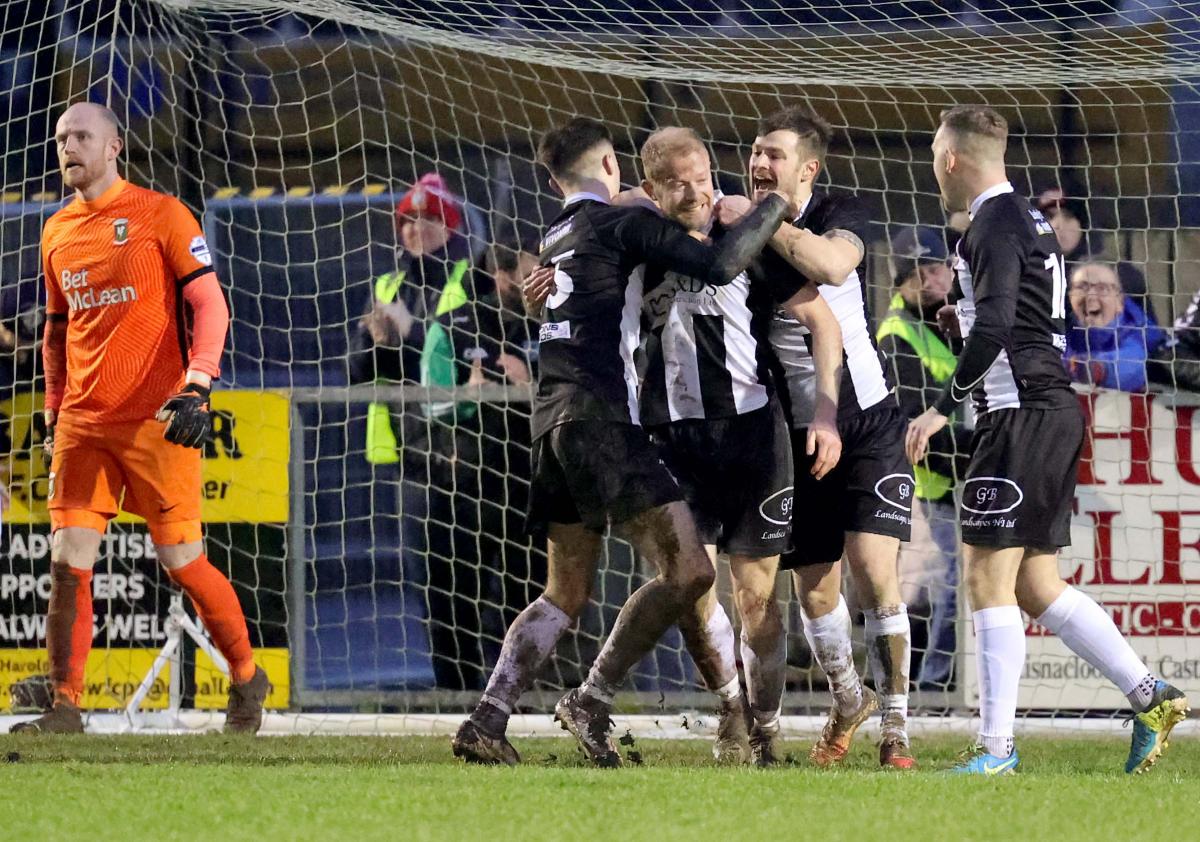 Dergview did make it 2-2 on 83 minutes though. Paddy McClean was harshly penalised for a handball, out on the left touchline, midway inside the Glentoran half. Matthew Kirk swung the free kick into the box and Graham Crown headed home from about 4 yards out, virtually unchallenged. Extra time loomed and with Glentoran having created little to test the Dergview keeper Alan Buchanan, the large travelling support was on edge. 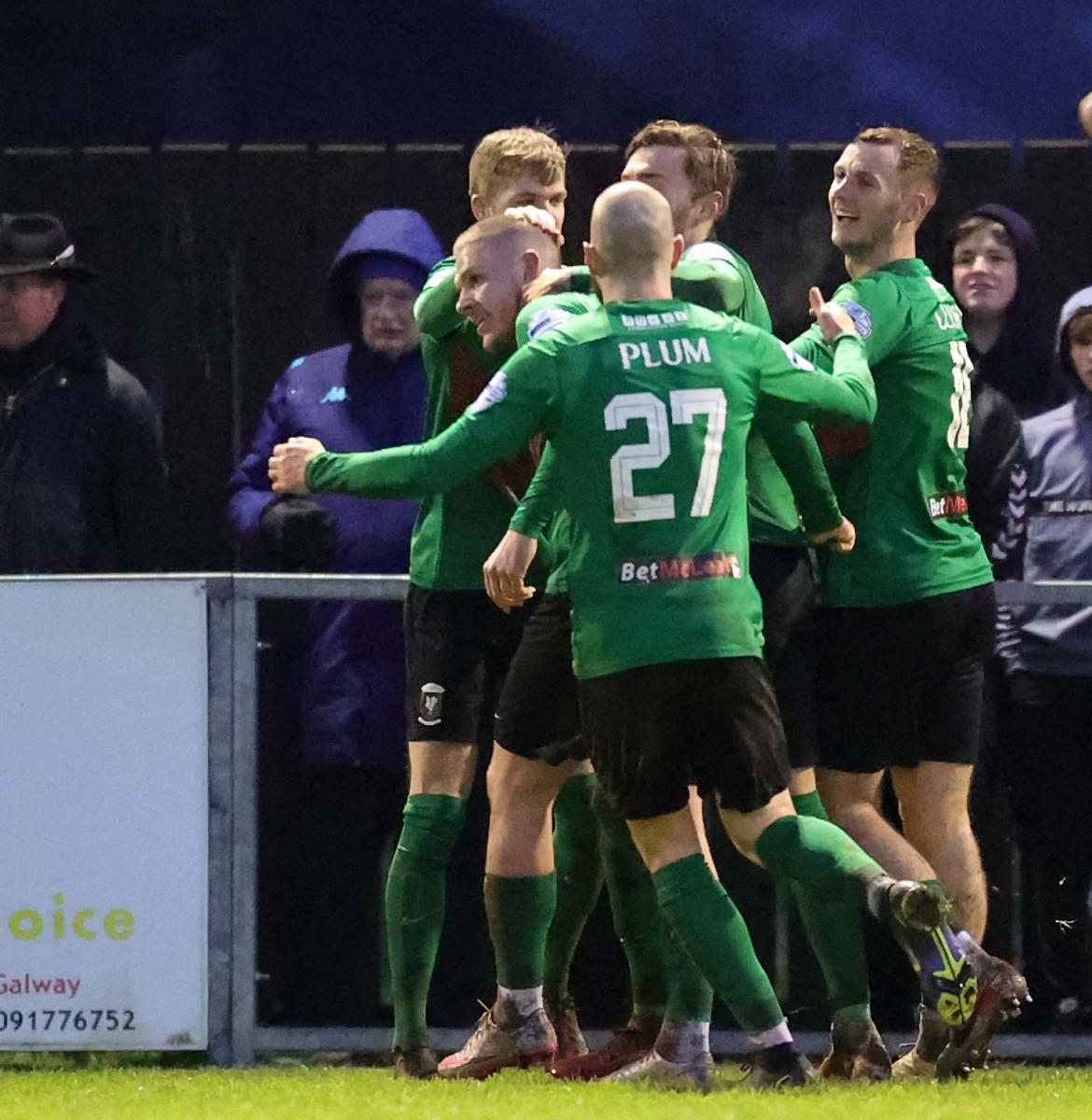 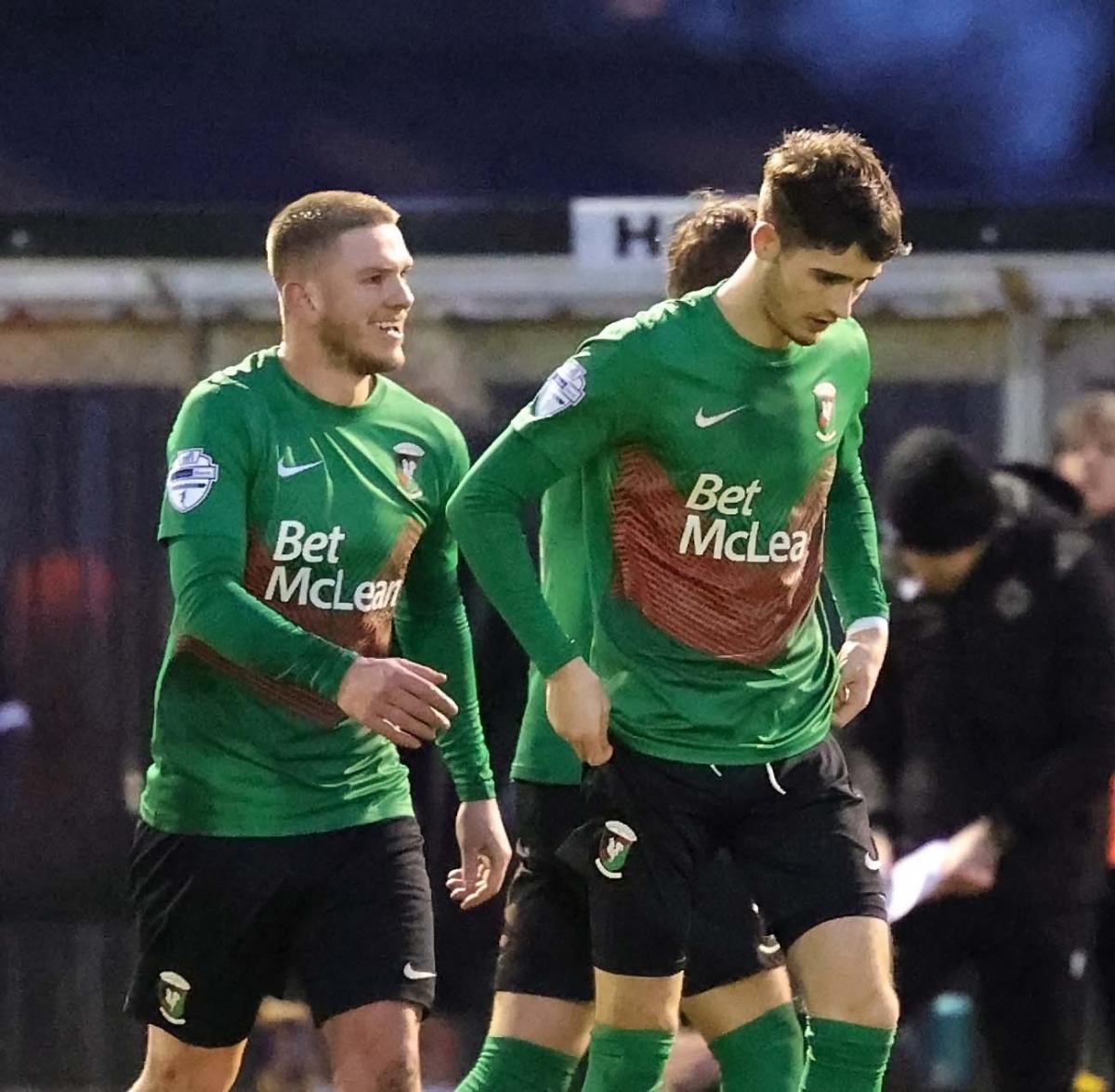 Around 90 seconds after Dergview made it 2-all though, Glentoran went back in front. The home defence cleared the ball to near halfway but a poor touch from Matthew Kirk saw substitute Hrvoje Plum gain possession. Plum fed Sean Murray and the former Dundalk midfielder let fly from well over 30 yards - his shot flying past Buchanan and into the corner of the net. What a way to mark your debut! The goal knocked the fight out of brave Dergview and the Glens might have added another goal in the remaining minutes however there was definately a sense of relief when referee Jamie Robinson blew for full time. 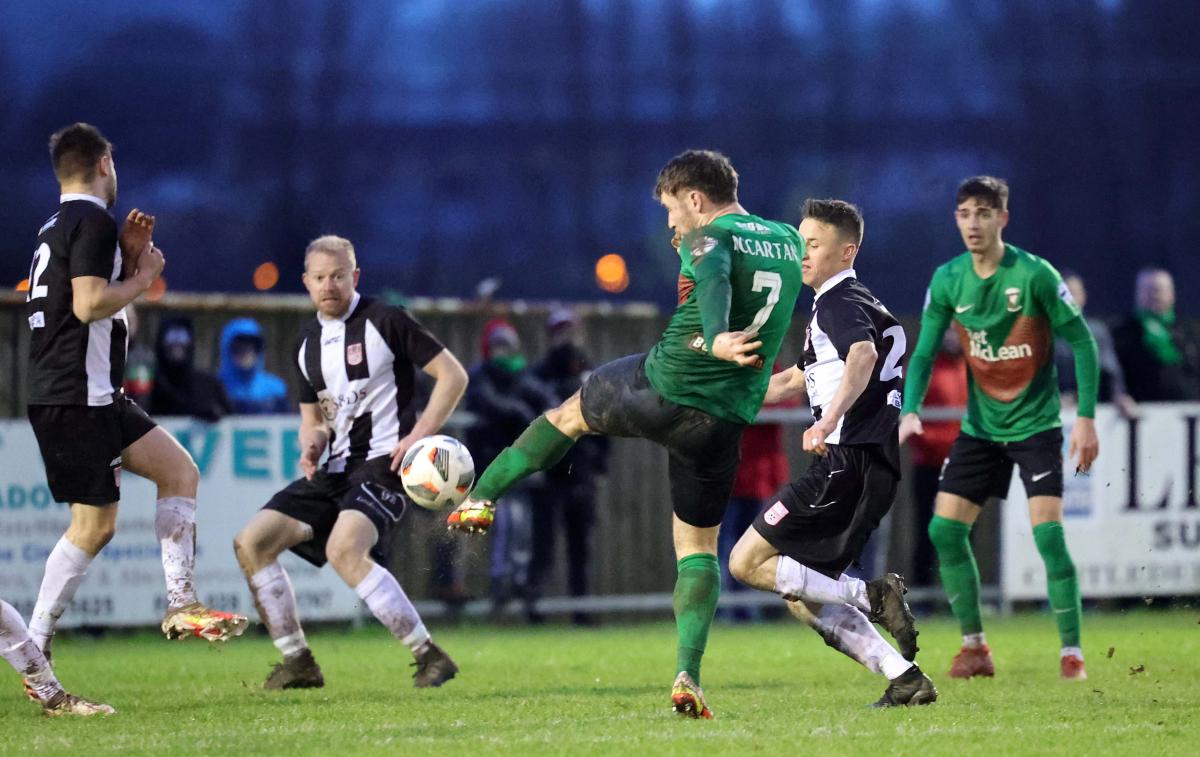 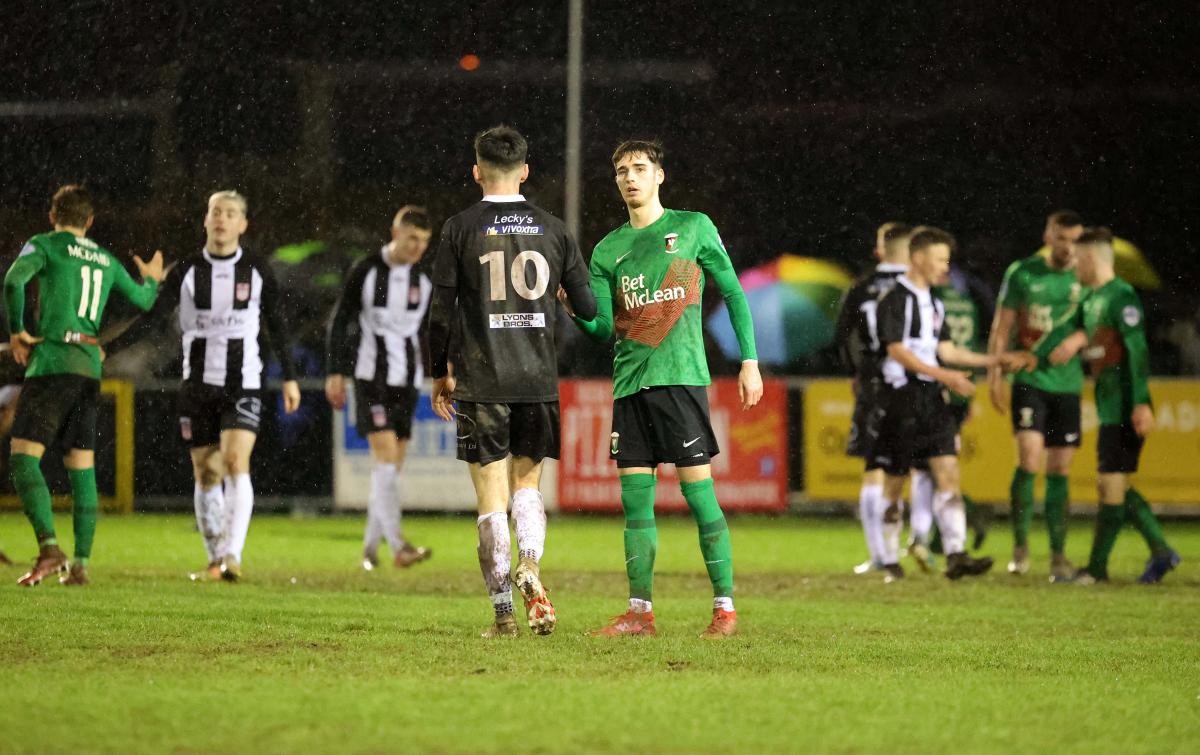 The Glens will travel to face Queens University in the next round with ties to be played on Saturday 5th February 2022.

The full draw for the next round of the Samuel Gelston's Whiskey Irish Cup is: 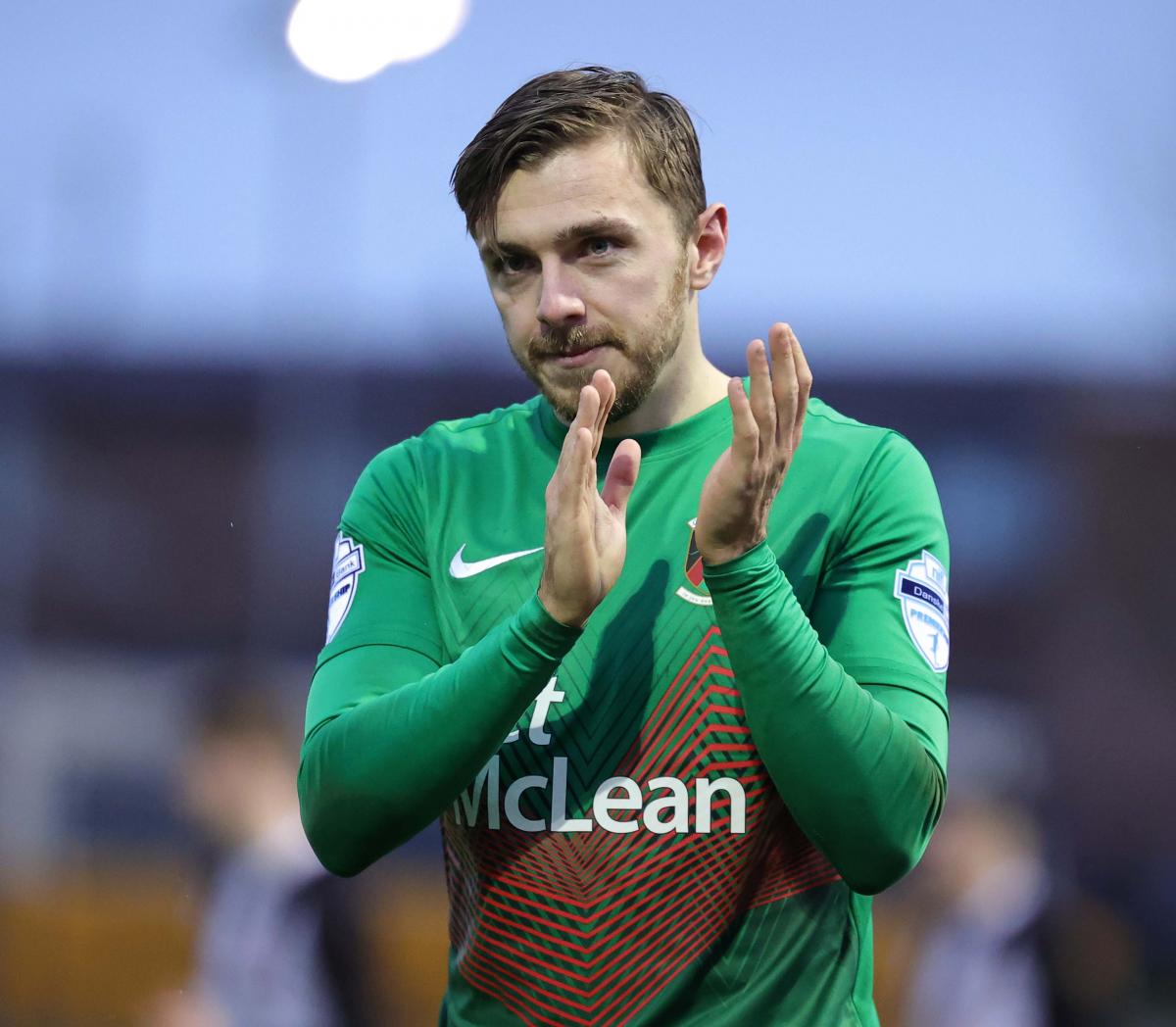