Coleraine remain top of the Danske Bank Premiership following a straightforward win against Glentoran at the Showgrounds.

The Glens went into the game without Nathan Kerr, Calum Birney and Eoghan McCawl (all injured) with Tre Sterling, Steven Gordon and Tiarnan McNicholl coming into the starting line up. 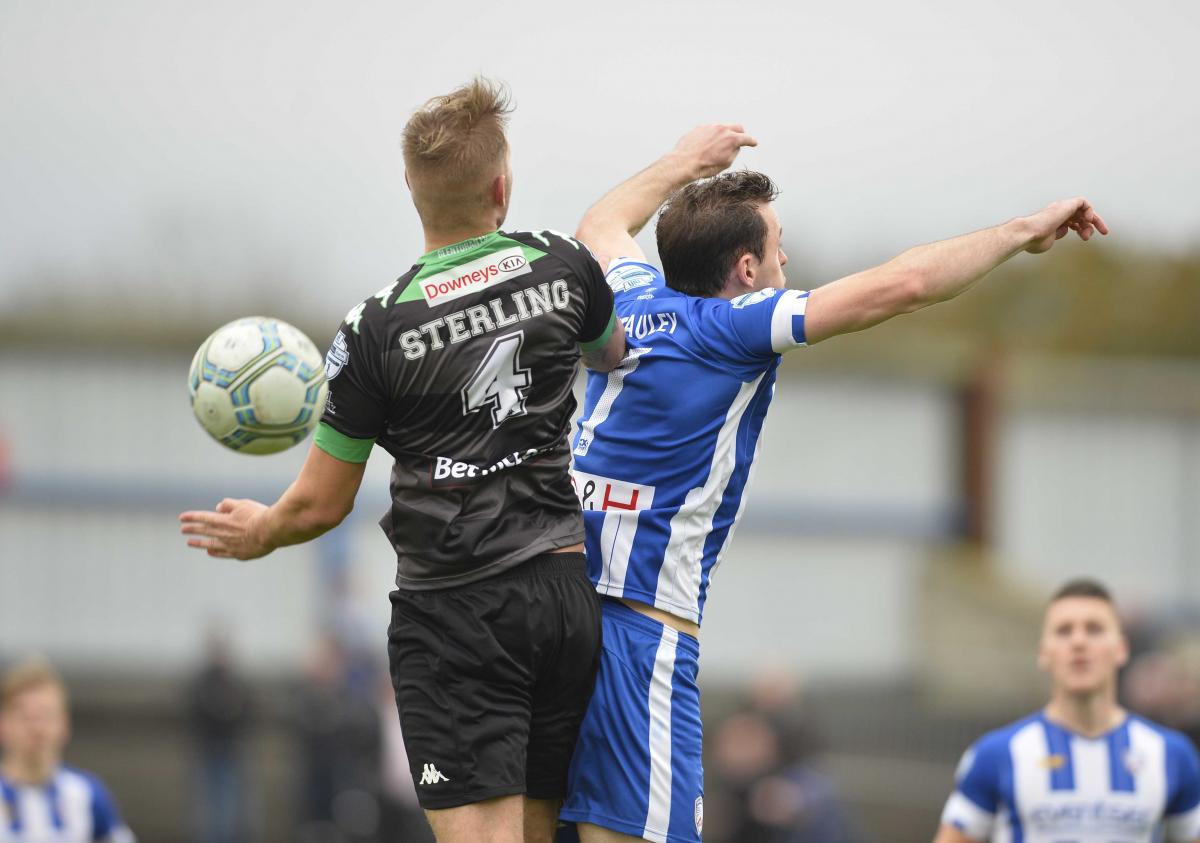 On an extremely windy day, the Glens needed to start strongly but had a nightmare opening, conceding a soft goal within 4 minutes. Ironically they could have been in front a minute earlier when Steven Gordon's flick found Curtis Allen. Allen in turn found Robbie McDaid who delivered a decent cross to the back post. The Coleraine full back missed the ball providing a chance for Tiarnan McNicholl but unfortunately he couldn't control the ball and it went behind. Coleraine went in front when the ball came off Jonny Addis in the area and fell to Ian Parkhill. Elliott Morris rushed from his goal but Parkhill rounded him and slid the ball home. On 10 minutes a poor pass from Corey McMullan in midfield saw the Glens lose possession and Coleraine broke forward menacingly. Tre Sterling was forced to take down the Coleraine forward on the edge of the area, earning himself a yellow card. Midway through the half a cross from the right was just too strong for the in-form Jamie McGonigle but on 29 minutes the home side did double their lead. 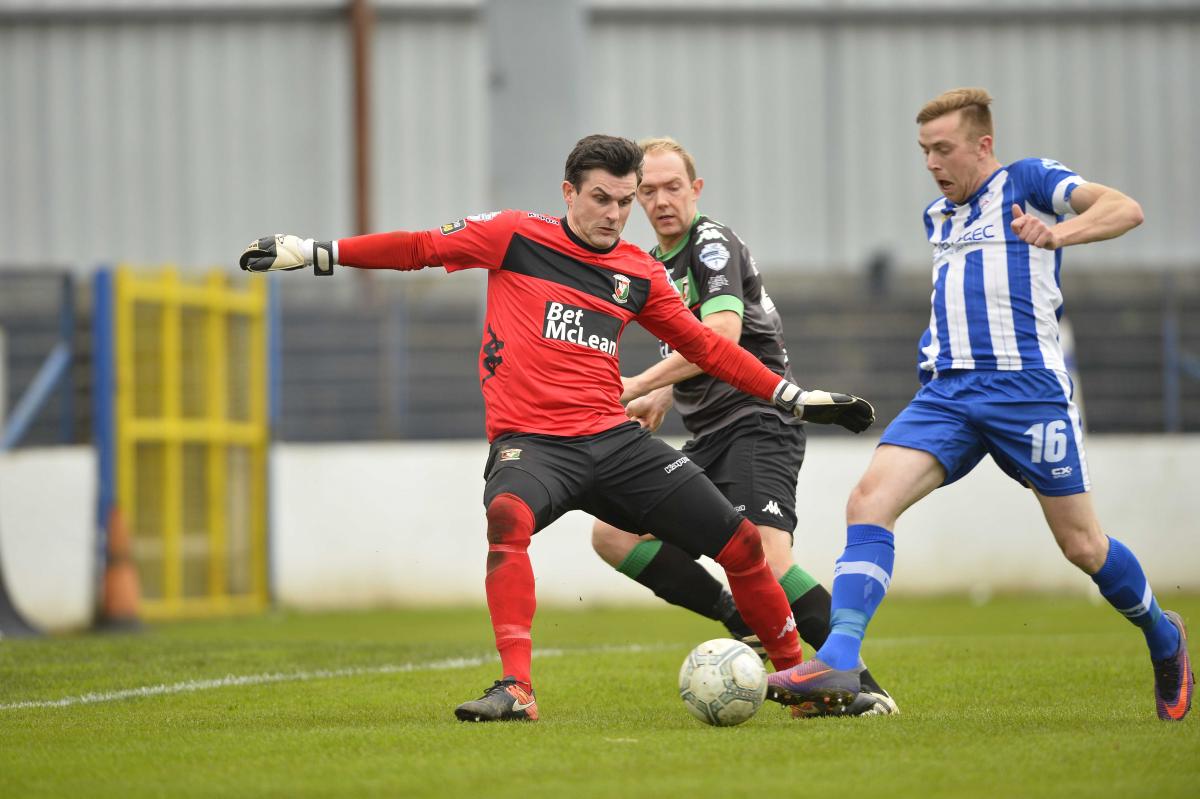 Josh Carson eluded his marker and got into the area before laying the ball off to McCauley. His low drive was well kept out by Elliott Morris and the Glentoran keeper then made an even better stop to deny O'Donnell with the follow up. Unfortunately for Morris his sharp reactions weren't matched by his team mates and when the ball came back into the 6-yard box Darren McAuley made it 2-nil with a powerful header which went in off the underside of the crossbar. Coleraine were very much on top at this stage and just like last Tuesday evening, the Glens midfield struggled badly to get and maintain possession. Jamie McGonigle went close with a 30-yard effort before Morris was called into action again to deny Parkhill a second goal. 5 minutes from the interval, in a rare Glentoran foray into the Colerain half, there was a chance for Steven Gordon. His low shot was blocked with the Glentoran players suggesting that an arm had been used ans appealing for a penalty. The erratic Ian McNabb waved play on though. 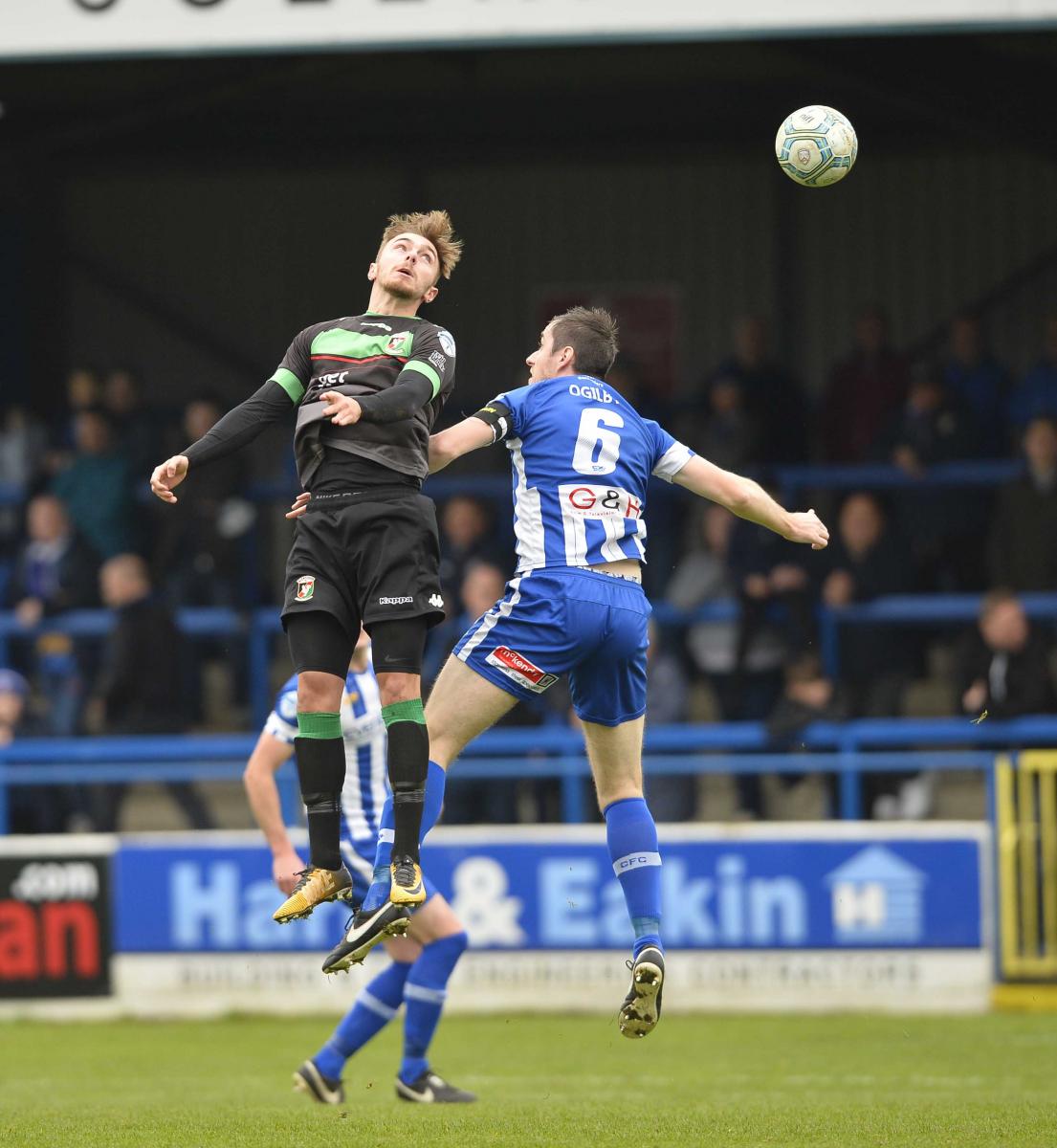 The Glens, wind at their backs, started the second half in a more forceful manner. Marcus Kane headed across the 6-yard box following a corner but there was nobody on hand to get on the end of it. Tiarnan McNicholl then had an effort blocked before substitute, James Knowles tested Chris Johns with a shot just on the hour mark. Glentoran were pressing forward looking for a goal which would bring them back into the game and on 65 minutes looked to have forced another corner with David Ogilby straining to try and stop the ball going over the by line. The linesman, 5 yards from play decided though that it was a goal kick! Allen hooked the ball wide on 70 minutes and then Conall Delaney was unlucky to see his curling effort go narrowly wide. We then had Glentoran's best chance to get back into the contest when Jonny Addis's long ball was missed by the Coleraine defence, allowing Curtis Allen a clear shot on goal. Keeper Johns came off his line and Allen tried to chip him but only succeeded in lobbing the ball into the keeper's arms. Dylan Davidson then tested Johns with a stinging free kick. The Coleraine stopper kept it out though and Marcus Kane was unable to convert the rebound, his shot being deflected for a corner. 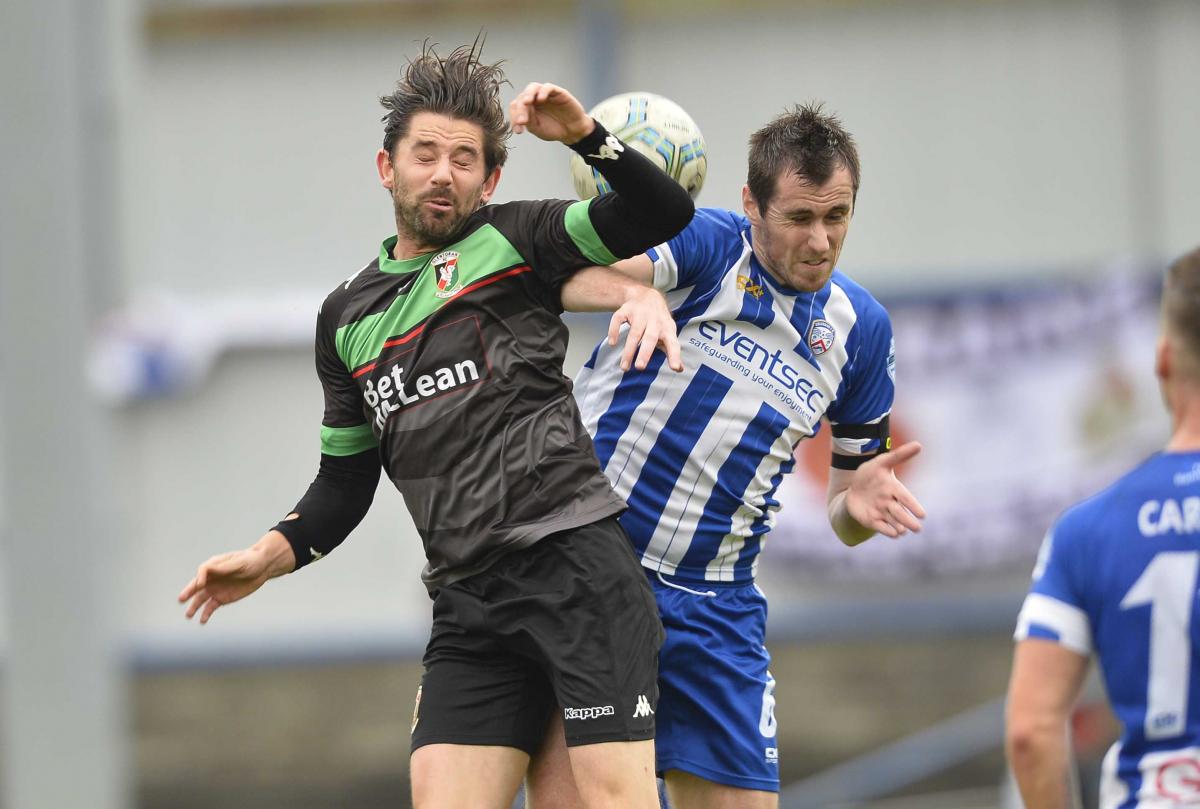 In the final quarter of an hour and with the Glens pressing forward in search of that elusive goal, Coleraine hit twice on the break. On the first occasion Jamie McGonigle was unlucky to see his shot crash back of the crossbar but with just 7 minutes later the game was put to bed with a third goal. Delaney's pass to Tre Sterling was short and Coleraine won possession, breaking down the left through Josh Carson. He found McAuley on the overlap and his cross picked out McGonigle. He skipped past Ross Redman before beating Elliott Morris at his near post. Game over! 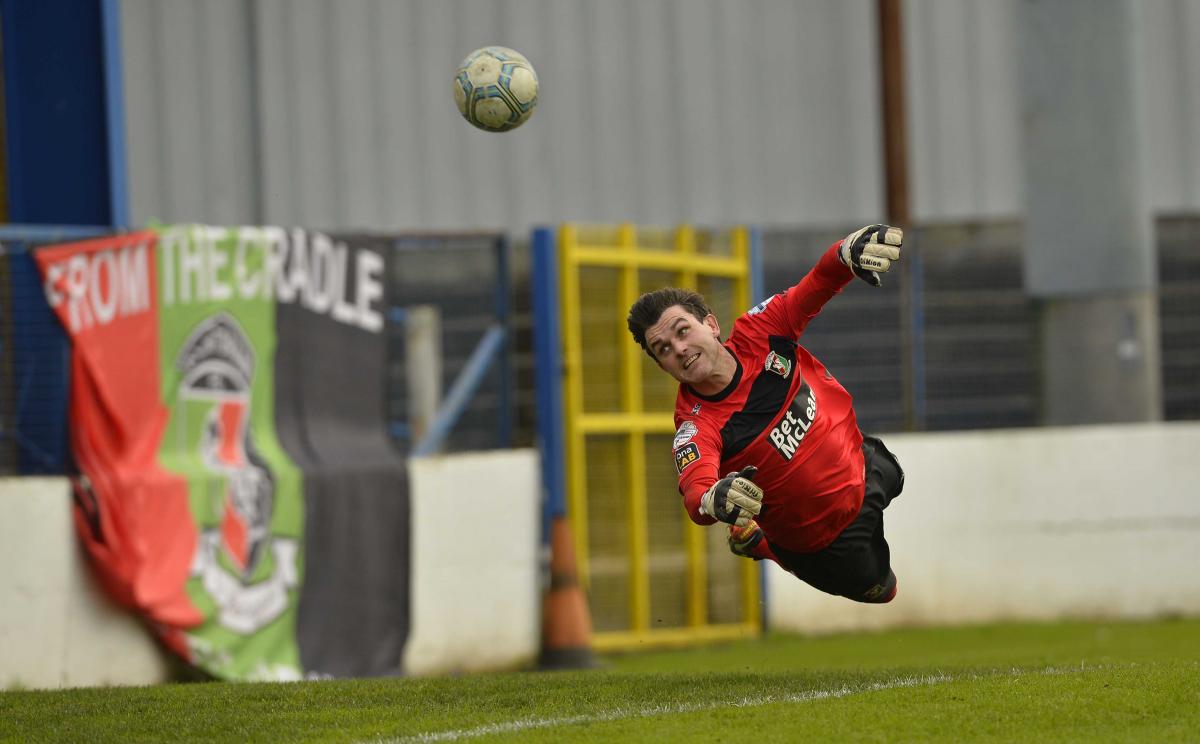 It was a disappointing afternoon for the large travelling support with few positives to take from the game. Having been over run in the first 45 minutes the team did rally after the break and had they scored during that spell of pressure we might have seen a different outcome. The return of Dylan Davidson is a big boost though and hopefully he can return to the starting line up and recreate his early season form. 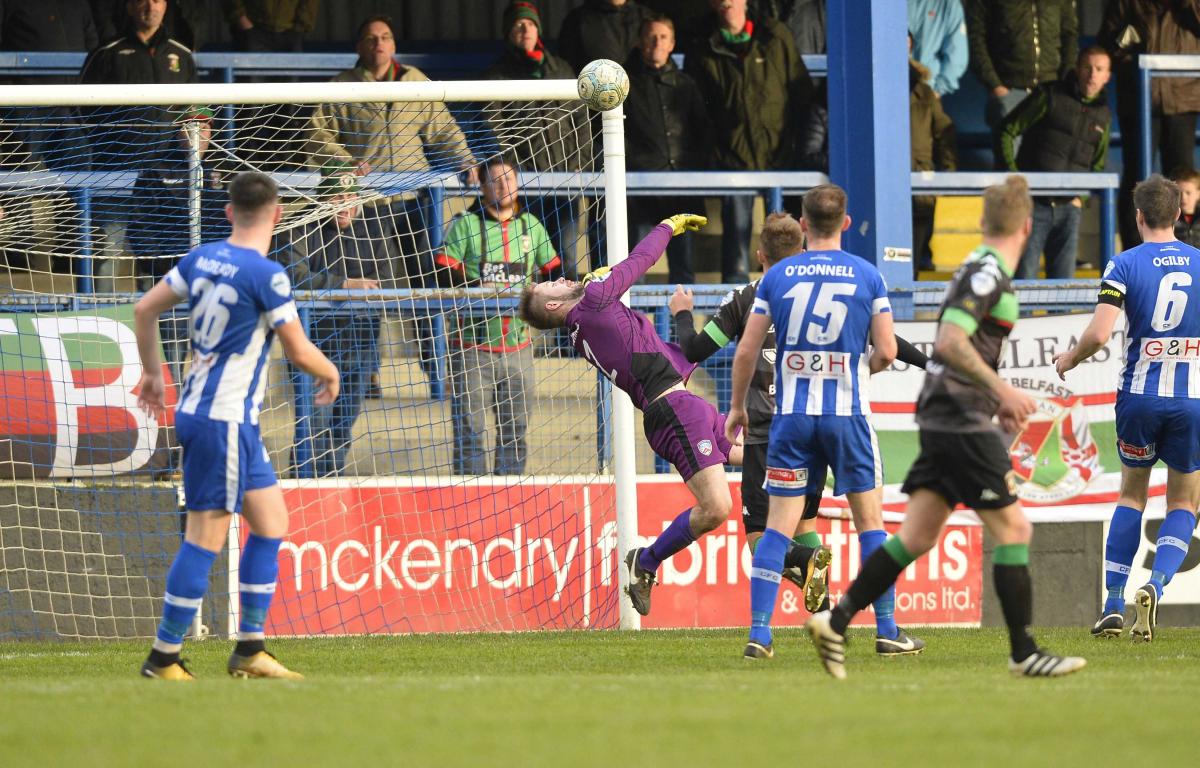 Subs: Davidson and Knowles for McMullan and Gordon (58) & Delaney for McNicholl (71) 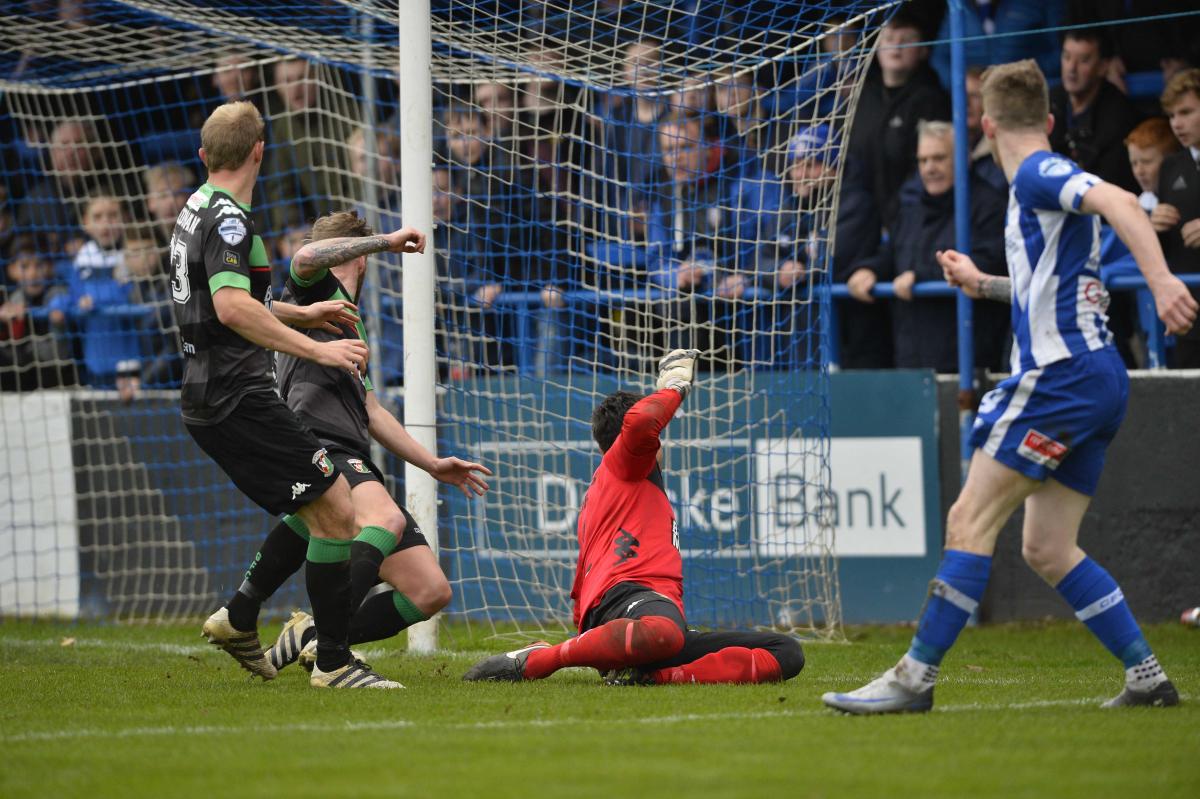