Champions Too Good For Glens

Cliftonville maintained their lead at the top of the table with this comprehensive victory over Glentoran at Solitude this afternoon.  Eddie Patterson gave striker Aaron Boyd his first start in an attempt to improve the visitors’ fire power but it was the reigning champions who found the net after just three minutes.  Liam Boyce found Chris Curran wide on the right, his low cross into the box was met by Boyce’s run and the Cliftonville striker steered the ball home from eight yards.  The Glens were finding the Reds’ attacking threat difficult to contain as the home side continued to press forward with Joe Gormley sending an overhead kick just over the bar, a neat side step from Boyce allowing him to shoot just wide from twenty yards and Curran denied by a last ditch tackle from Jimmy Callacher. 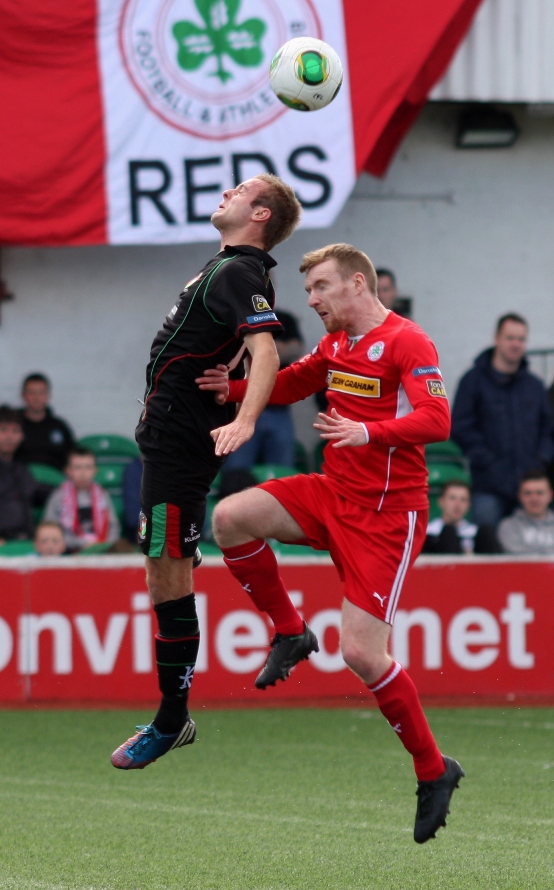 Conor Devlin in the Cliftonville goal was rarely troubled, dealing easily with a Callacher free kick and watching on    asan Aaron Boyd header and a deflected David Howland effort both drifted wide.  On thirty six minutes Joe Gormley  had a goal ruled out by a tight offside decision, but, just as it looked as though the Glens would make it to the break  just one goal in arrears, Cliftonville doubled their lead.  Once again Boyce was involved as he powered his way  through the middle with the game entering first half stoppage time.  The Glens defence were guilty of ball watching as  Boyce slipped the ball through to an unmarked Martin Donnelly whose precise shot from just inside the box nestled in  the bottom corner.

No doubt Eddie Patterson had a few words to say at half time and it was a much improved Glens who came out for the  second half.  Just four minutes in David Scullion’s corner almost forced an own goal from Ciaran Caldwell and on the  hour another of his deliveries saw an Aaron Boyd header brilliantly tipped over by Devlin.  From the resulting corner it  was Jay Magee who was cursing his luck as his header came crashing back off the cross bar.  After sixty six minutes the Glens finally made the breakthrough.   Mark Miskimmin, on as substitute for Jim O’Hanlon, exchanged passes with Stephen McAlorum in the Cliftonville area,  his shot brought another great save from Devlin but the rebound fell nicely for him and he blasted the ball into the roof of the net. 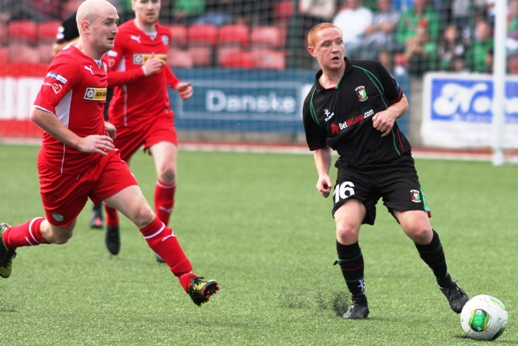 Both visiting players and supporters now believed that the come-back was on, but their hopes were dashed just three minutes later when Cliftonville substitute Stephen Garrett was brought down by a rash challenge from Callacher in the Glentoran box.  Referee Raymond Hetherington pointed to the spot and, after a long delay for treatment to Marcus Kane, Boyce stepped up to blast the ball straight down the middle and past Elliott Morris.  The visitors were now deflated and Cliftonville added to their tally on seventy nine minutes when Joe Gormley, who had been a thorn in the Glentoran side all afternoon, tried his luck from outside the box.  From the away end the ball appeared to deflect off Callacher’s challenge and loop over Morris to effectively wrap up the points for the League leaders.

Cliftonville were able to see out the rest of the game with ease, a disconsolate Glens showing few signs of being able to stage a fight back.  So heavy defeats on consecutive Saturdays by both North Belfast sides and both players and supporters will be anxious to get back on track next Saturday when Ballymena United are the visitors to the Oval.