Ok, the Cliftonville side put on show at The Oval tonight weren't exactly the Champions select which scored 91 goals in the Danske Bank Premiership this season but as Eddie Patterson will no doubt be saying this evening, you can only beat the quality of opposition placed in front of you. Cliftonville sent a largely understrength team out to The Oval tonight giving their regulars a rest after winning The Gibson Cup on Saturday against Linfield. Only Jaimie McGovern, Martin Donnelly, Stephen Garrett and James Knowles appeared from the regular starting Cliftonville side.

Despite the second-string side, Cliftonville were first out of the blocks, continuing to play the style of football made famous by their teammates this season. Just 2 minutes into the game Martin Donnelly had an effort from the edge of the box which Elliott Morris had to be aware of and tipped over his crossbar. Cliftonville continued to press and Stephen Garrett broke clear through the left side of the Glentoran defence. Garrett attempted to dink the ball over the oncoming Morris but Elliott made the angle awkward and managed to block. 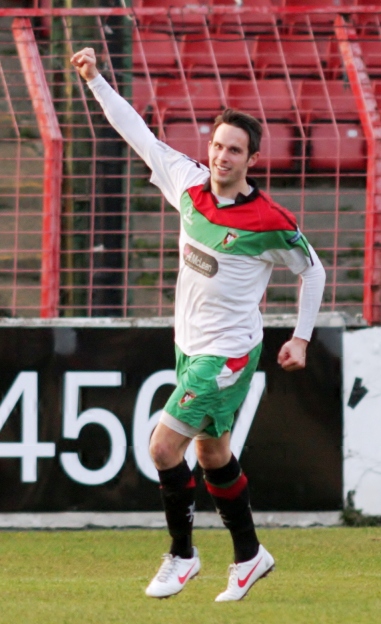 Glentoran hadn't started in the game at all but in a 5 minute period from 10-15mins in the game, the match was effectively won as Andy Waterworth may have had a hattrick in that time. Waterworth firstly showed skill and composure in taking the ball around the Cliftonville central defence before unleashing a fabulous strike from 25 yards, nestling past Ryan Brown in the Cliftonville top corner. The goal was of fantastic quality and one which sent the Glentoran fans into jubilation. Waterworth wasn't done yet though. Only 2 minutes later he was at it again after a brilliant flick on the byline, he powered a run in from the left hand side. He used his pace and strength to shrug off the oncoming tackle and powered home clinically with his left foot into the far bottom corner. Waterworth was absolutely on fire and the two goals almost became 3 in what would have been an incredible hattrick when a poor defensive header presented him with the chance to apply the finish. Cliftonville's defence managed to scramble back and clear however just as Andy went to power home his third.

The first half didn't offer too many more chances, Glentoran continued to hold possession whilst Cliftonville battled hard to find a route back into the game. On 40th minute after a break down the left-hand side Cliftonville had an audacious effort which went narrowly wide of Glentoran's post. 2-0 at half time and Glentoran were largely in control thanks to Waterworth's brilliance.

The second half continued in similar vein to the first. Cliftonville shared large spells of possession but neither side was finding any chances. Glentoran made a number of changes giving opportunities to some of the younger players such as Stephen McCullough, Kevin Bradley and Carl McComb. 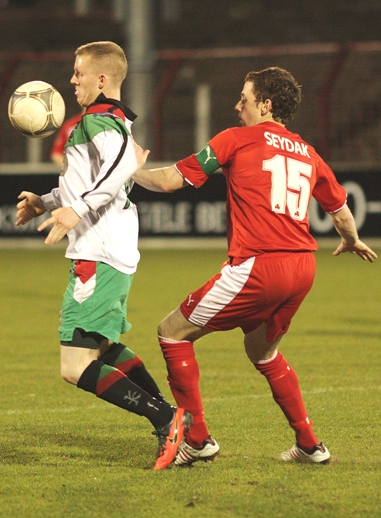 yards out he somehow managed to blast over Elliot Morris' bar.

It was McComb who got the all-important third goal as well as he latched onto a pass over the top to control superbly and finish cooly into the top corner on 79th minute. The goal secured the result and ended the game as a context. A moment of controversy followed on 86th minute when Cliftonville felt there was an infringement inside the area, however the referee deemed the foul outside the Glentoran box. The resulting free-kick went narrowly over the crossbar but never troubled Morris.

So, 3 points well deserved and well secured by Eddie Patterson's side. The win was the first time Glentoran have beaten any of the 3 teams above them in the Danske Bank Premiership this season and surely a statement of how far the team has come. No doubt come 4th May at Windsor Park the Cliftonville side on show will be a much different test, but for now anyway Glentoran have the upper-hand in the Pre-Cup final mind games.