A late Marcus Kane header gave Glentoran all three points from a tight cagey game against Carrick Rangers on Tuesday night at The Belfast Loughshore Hotel Arena. Marcus’ goal along with an early Robbie McDaid strike was enough to overcome a goal from ex-Glens striker Darren Henderson. 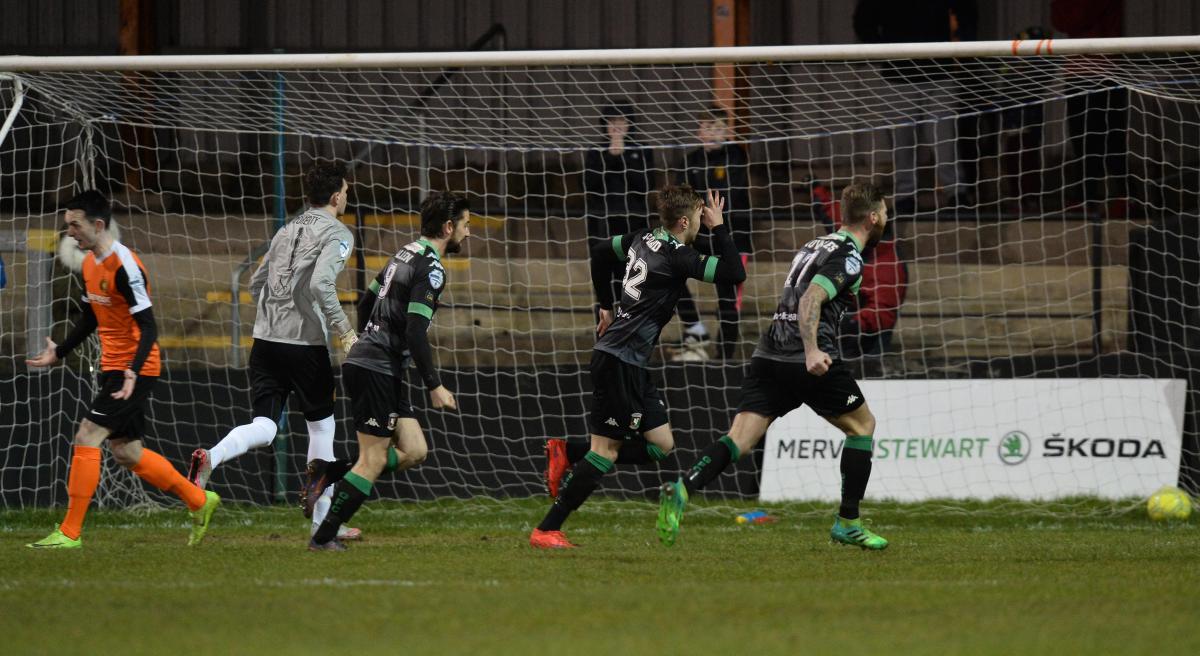 Gary Haveron looked to rebound from Saturday's defeat at Seaview by making six changes. In came Ferrin, Garrett, Redman, Knowles, McGuigan and McDaid as he looked to avoid tiredness in the midst of a run of 5 games in 14 days. In contrast to Glentoran, Carrick enjoyed a thumping victory on Saturday past and showed early signs of that confidence in the third minute when they rattled the crossbar twice. Darren Henderson found himself with time and space and tried his luck from range but his strike cannoned back off the bar, Eamon Scannell reached the loose ball first and lashed his effort against the underside of Morris’ crossbar. Glentoran capitalised on their luck immediately as they broke away to score. James Knowles played Robbie McDaid in behind the Carrick defence and he calmly slide the ball past Doherty and into the bottom corner to give Glentoran an early lead. 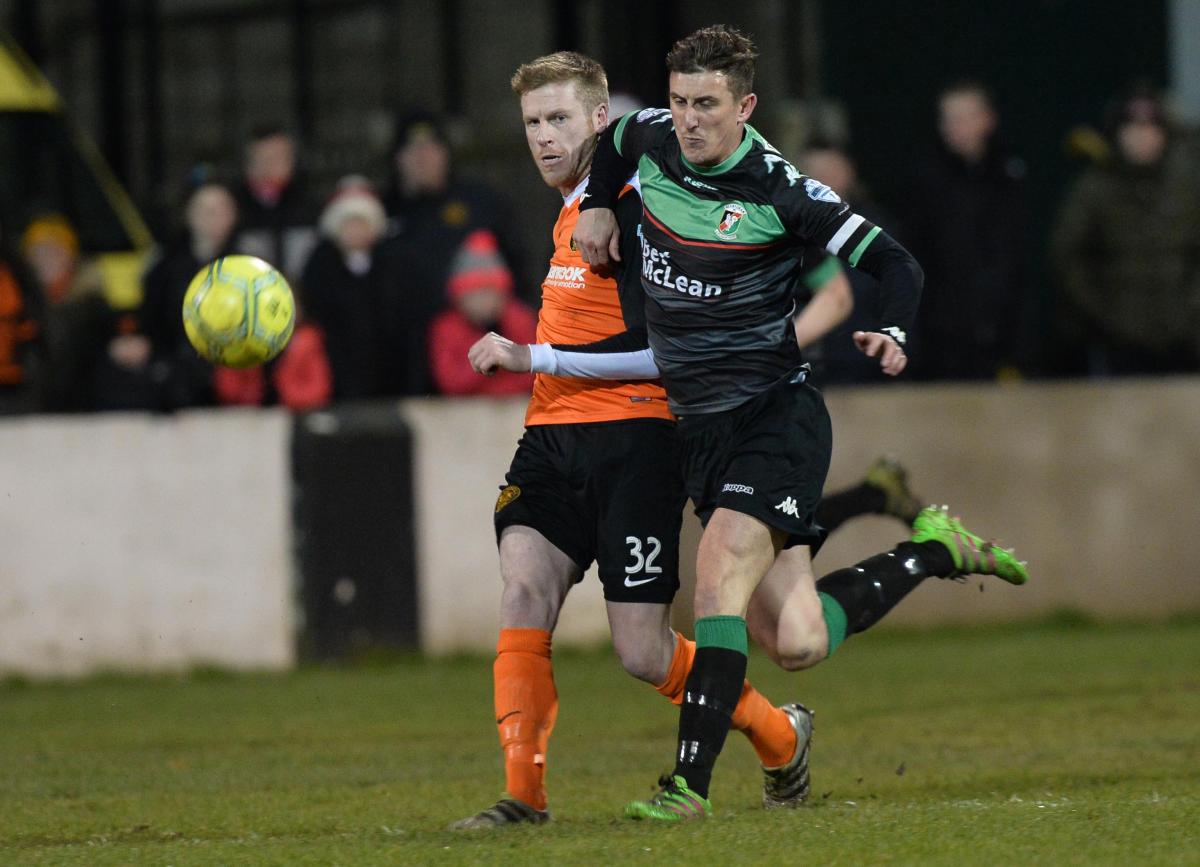 After the frantic start the game slowed down as both teams struggled to create chances. Curtis Allen almost found a way through with a looping header but he couldn’t quite direct Ross Redman’s excellent deep cross over a stretching Doherty. Whilst after half an hour Knowles shot wide from 20 yards after working some space to shoot. At this point Glentoran looked relatively comfortable without creating much but probably should have doubled their lead 10 minutes from the break as a nice counter attack from McGuigan, McDaid and Allen should have resulted in a chance for an unmarked Dylan Davidson but Allen’s pass was poor and the opportunity was gone. 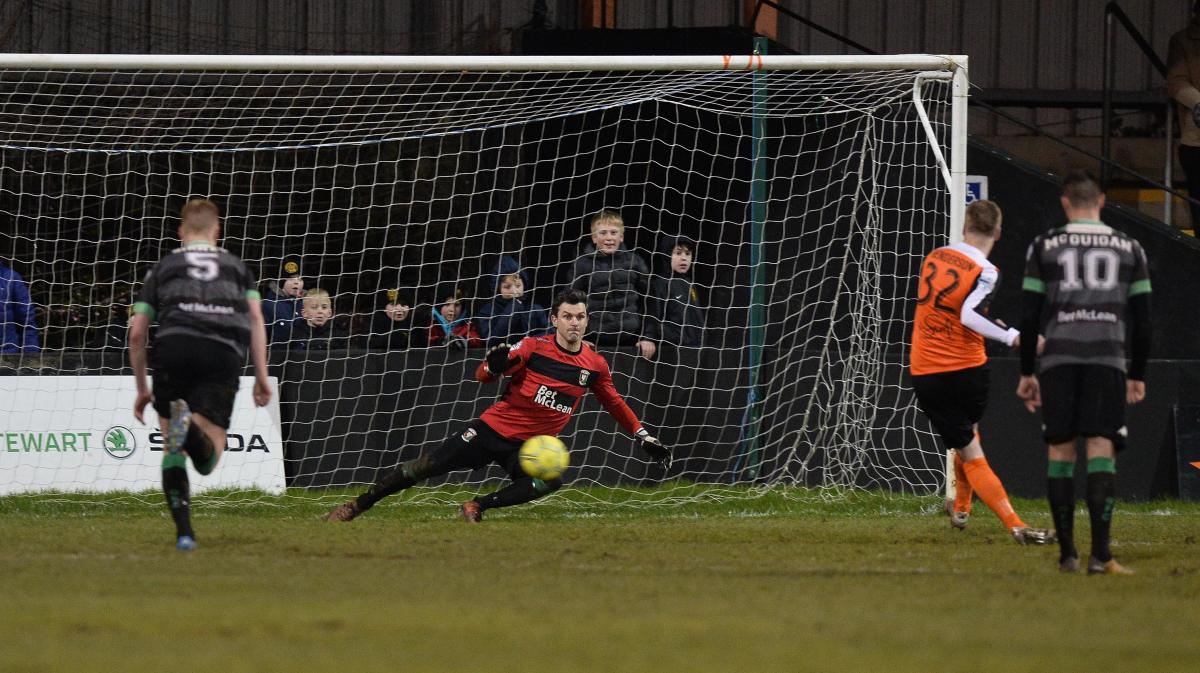 Almost immediately Glentoran were punished. Andrew Mooney worked his way to the byeline and crossed low, it should have been dealt with by Birney but his mis-kick rolled straight to Darren Henderson and the experienced striker made no mistake planting the ball beyond Morris for the equaliser. Half Time Carrick Rangers 1-1 Glentoran 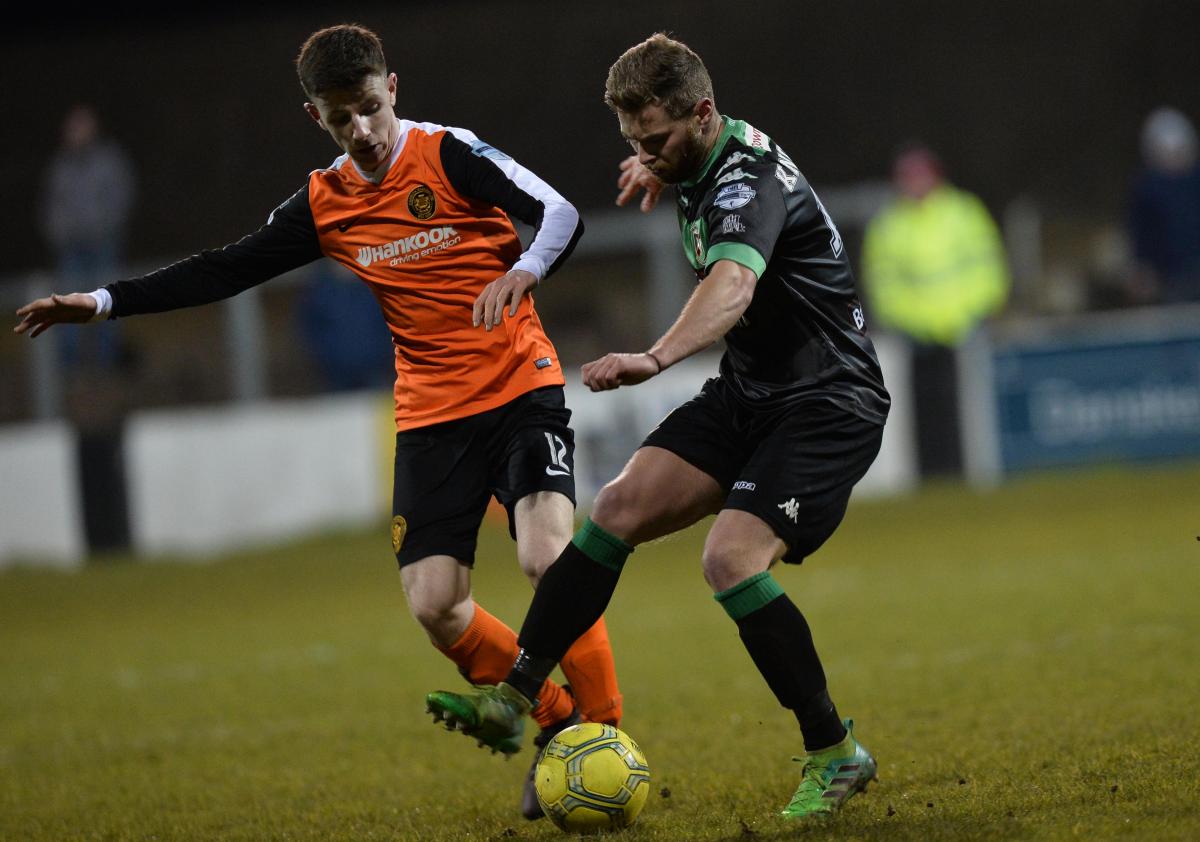 Just like the first half Carrick started the second by applying pressure and creating an excellent chance. Lee Chapman and Ross Redman both challenged for a bouncing ball just inside the Glentoran penalty area, both players raised a foot at the ball, it rebounded out of play and referee Evan Boyce adjudged that Redman fouled Chapman, pointing to the spot and awarding a penalty. Fortunately for Glentoran the home side failed to convert as the Henderson spot kick struck the base of the post and rebounded to safety. 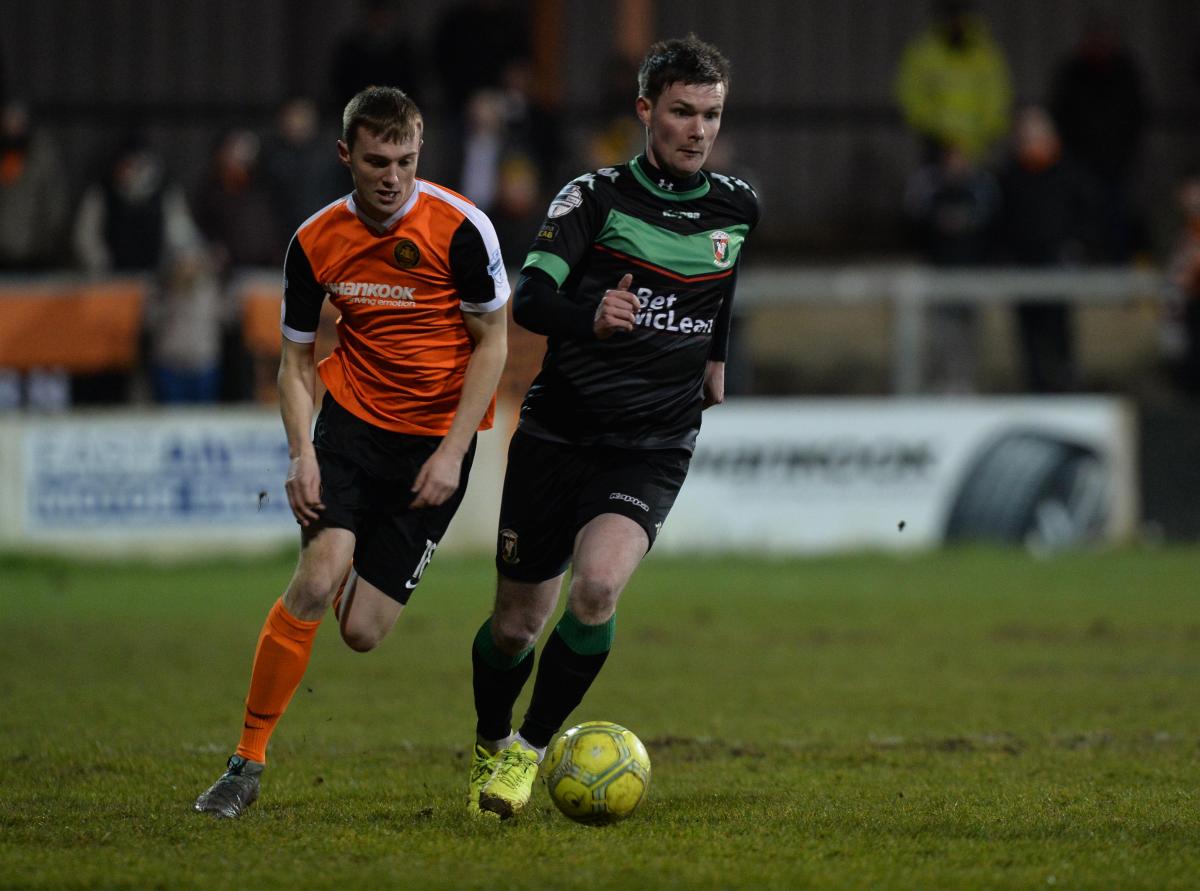 Again much like the first half Glentoran grew into the game, they looked the more assured but didn’t create many clear cut chances. John McGuigan stung the palms of Harry Doherty with a 20 yard drive and Davidson clipped the crossbar from longer range after an hour. Allen and McDaid then went close with a pair of looping headers but the Carrick defence were doing a good job of restricting Glentoran to deep crosses and long shots whilst looking threatening on the counter.

On one of these breaks Daniel Larmour ran 80 yards after dispossessing Redman, he exchanged a neat one two with Mooney but the young defender couldn’t find Henderson at the back post as Willie Garrett intervened. With a quarter of an hour to go Marcus Kane set McDaid away down the right wing but his cross was agonisingly ahead of the stretching Allen, the forward couldn’t get enough contact on the ball to divert it goalwards. This looked to sum up Glentoran’s frustrating night until they won the points with a minute to go. 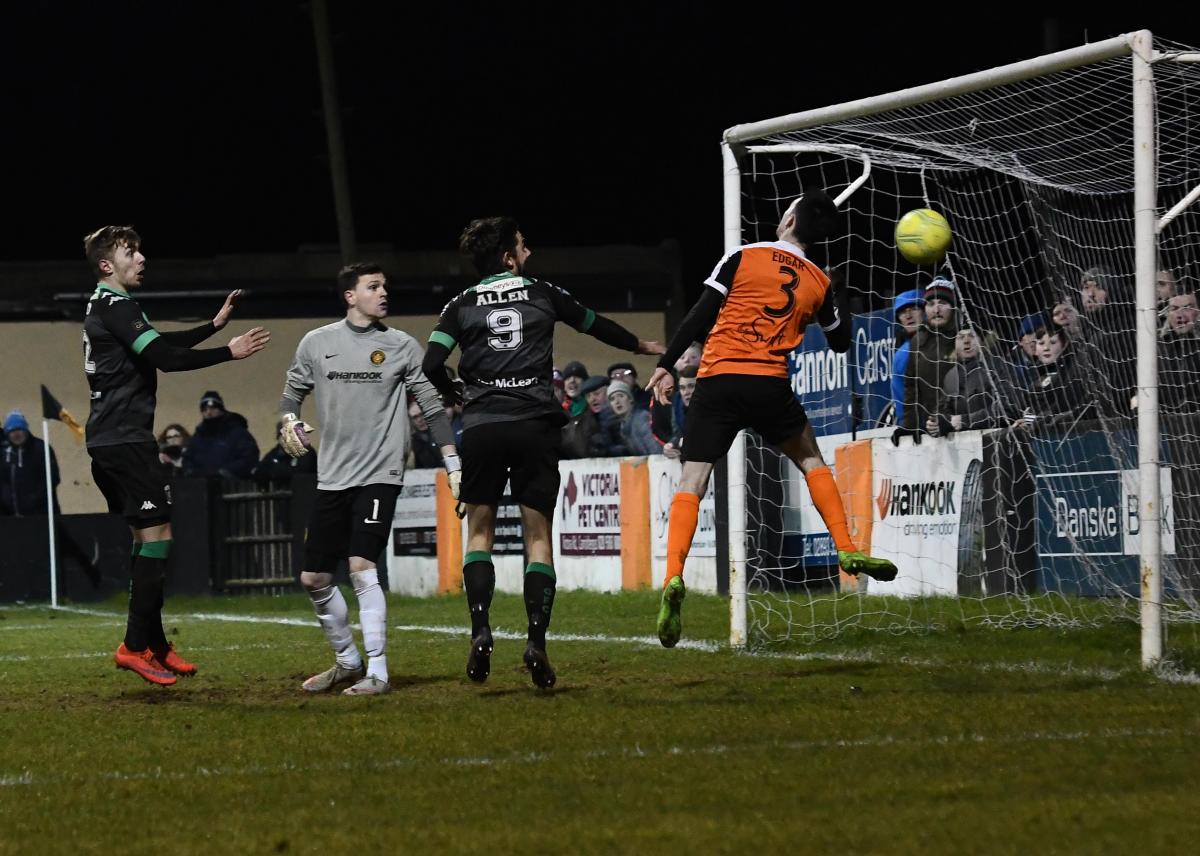 Curtis Allen outmuscled Damien McNulty who whilst on the ground, grabbed Allen’s ankle and dragged him down, stopping the striker advancing towards goal. To the outrage of many Glentoran supporters he somehow escaped a second yellow card, referee Evan Boyce having booked him minutes earlier. The non-sending off was rendered unimportant from the resulting free kick, James Knowles curled a teasing ball in and Marcus Kane provided the touch required, glancing a header into the top corner to send the Glens back to East Belfast with all three points. Indeed Kane almost added a spectacular third in injury time, thumping a loose ball against the post from 25 yards at the same end of the ground where he notched a stunning strike three years ago, but his header tonight was enough as Glentoran saw out the remaining time to claim
another three points in their quest to break back into the top six. 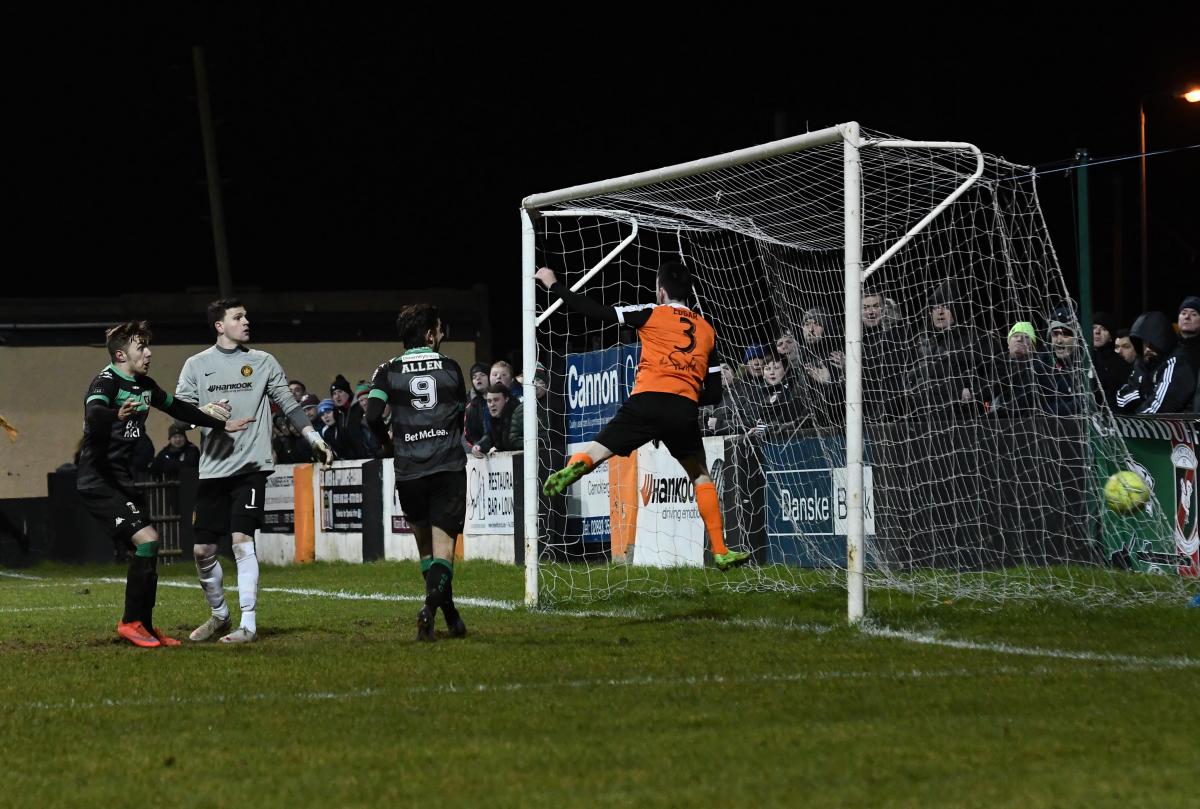 Gary Haveron will be looking for another win on Friday night when Colin Nixon brings his Ards side to The Oval off the back of two heavy defeats. 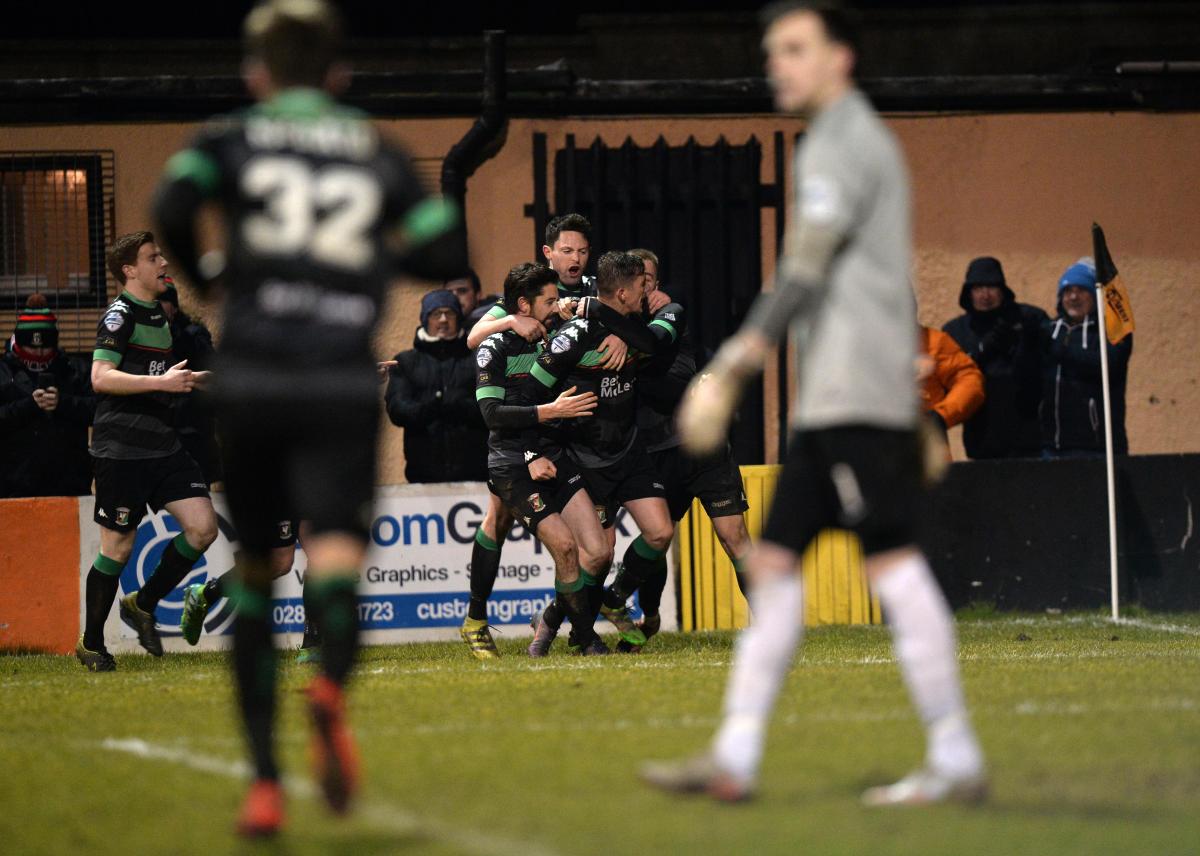