Glentoran failed to beat Carrick Rangers for the 3rd time this season, conceding a last minute equaliser to the home side in today's Danske Bank Premiership game.

Despite controlling the first half and going into the break with a one goal advantage, Glentoran's tactic of sitting back in the second half and inviting pressure eventually cost them victory at Taylor's Avenue. 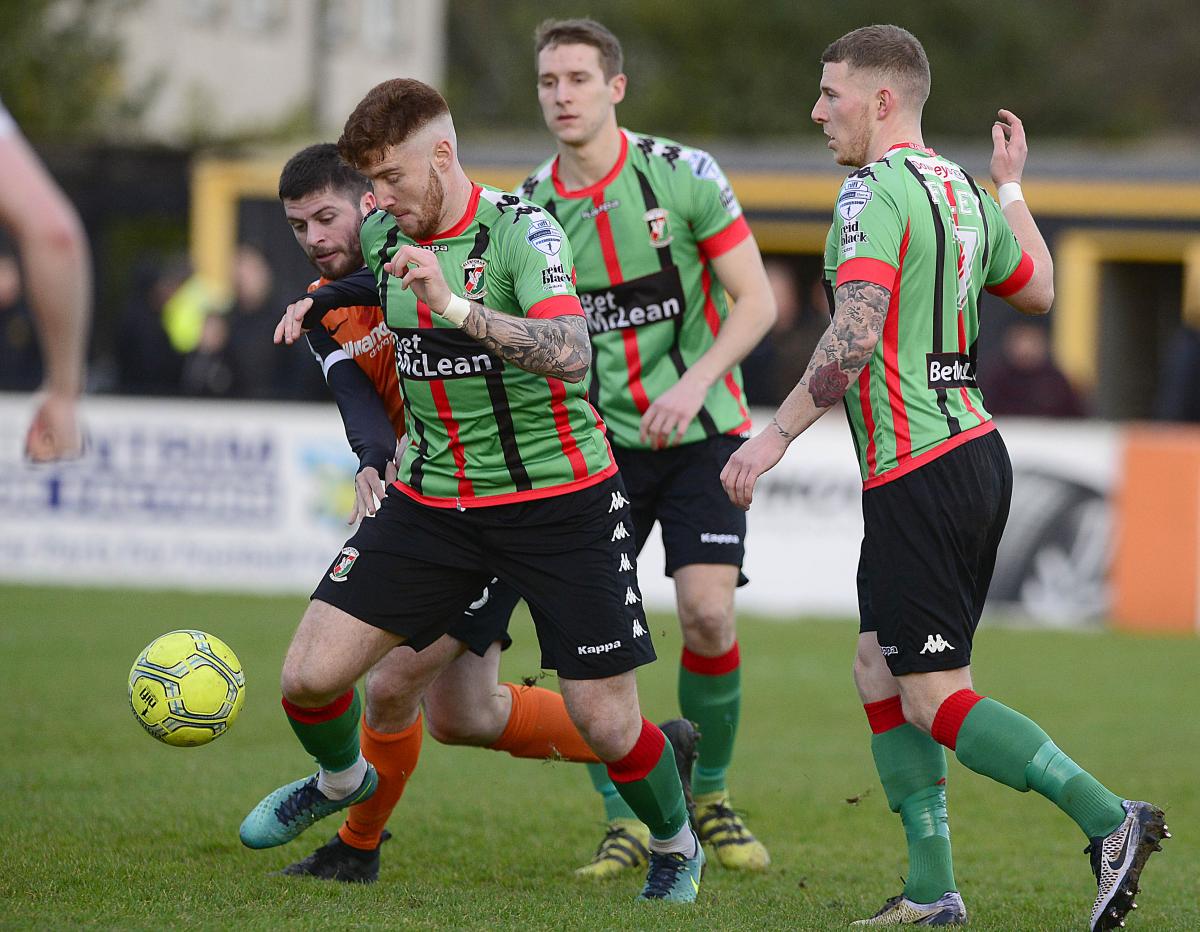 The Glens arrived at Carrick today following a dismal run of form which has seen us drop out of the top six. Expectations were high amongst the fans that a win would do a lot for team confidence and set us up for the expected big two sell out match on Boxing Day.
Kick off was on a fine mid-winter day with the Glens playing the first half down the slope, but against the gusting wind. Corey McMullan was in for Willie Garret who had made his comeback last week following his horrific time with injury. The travelling support were heartened by the fact that the Glens line up looked positive with McDaid and Allen leading the attack. 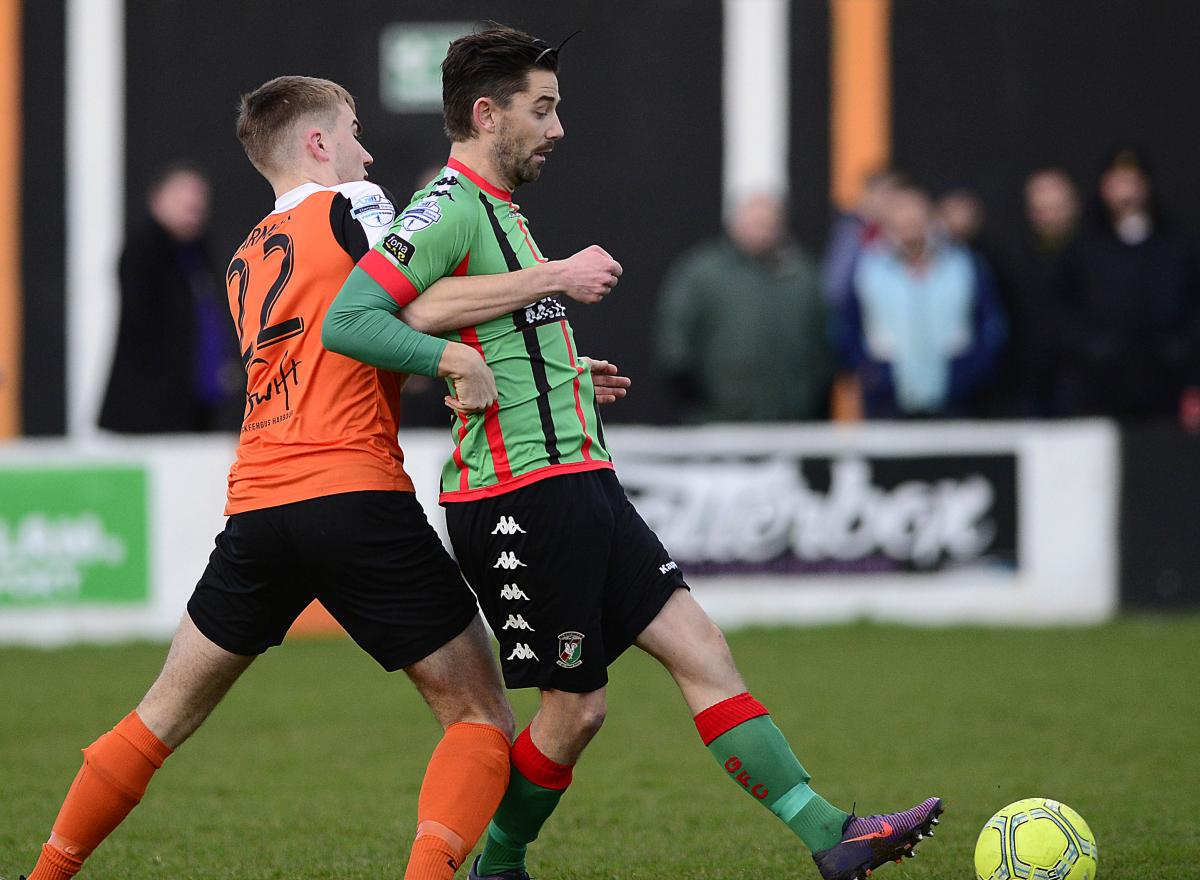 It was the Glens who were first to show endeavour with the two forwards linking well in the 10th minute with the Carrick defence making a back header to the keeper. Two minutes later, a wicked inswinging corner from Davidson resulted in Eric Foley getting a glancing header at the near post to beat the Carrick keeper; one nil for the Glens. A feature of play during the first half was the quality of corners, coming from Davidson with his left foot and Foley with his right. As a result, the Carrick keeper was forced to punch over the bar on more than one occasion. The Glens dominance of the half continued when in the 32nd minute a good ball from Corey McMullan found Curtis Allen who in turn found Robbie McDaid whose side footed shot went just wide from a good position. 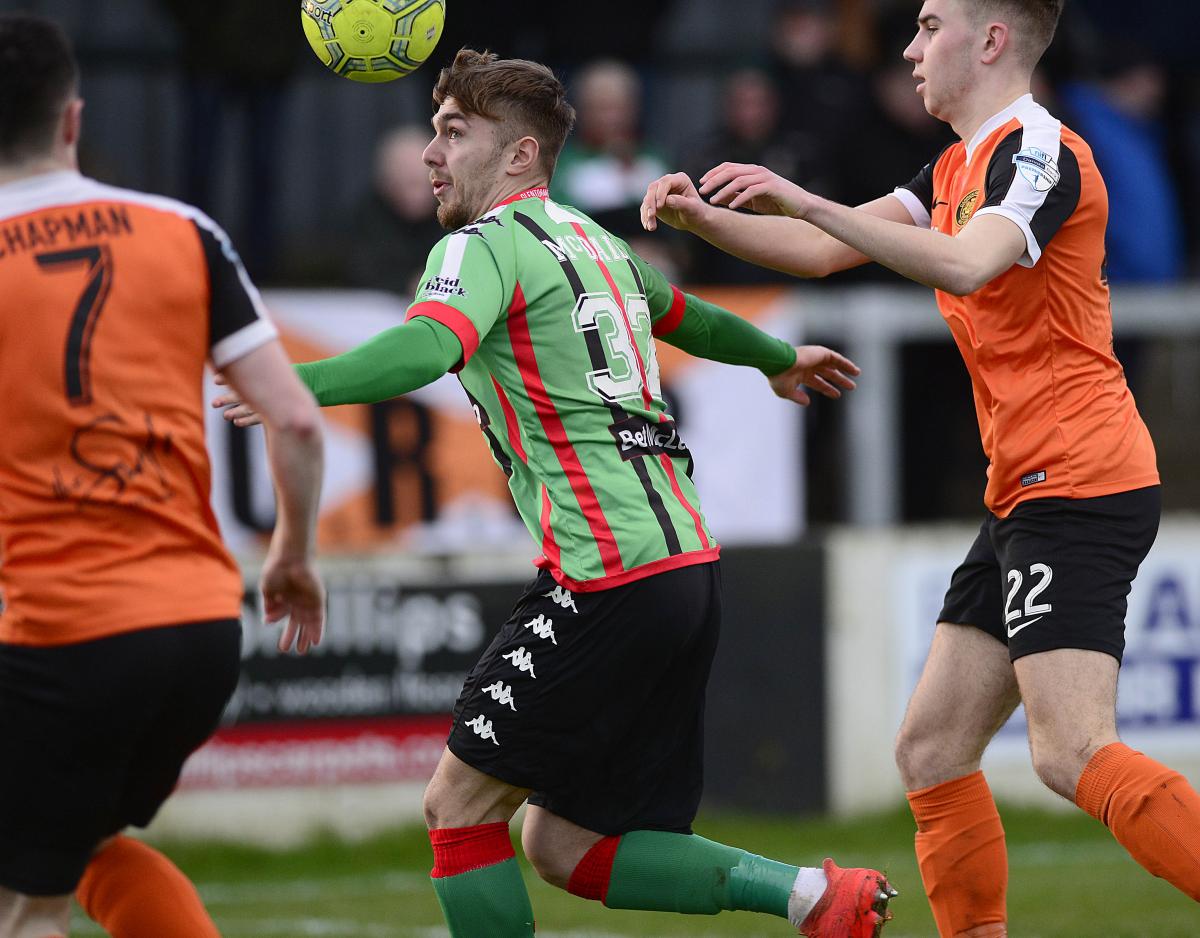 At half time the Glens looked to be in a good position, they had been in command of the game with Elliott Morris mainly being a spectator. Dylan Davidson had appeared to be struggling with a knock throughout the first half, but after a run out at half time resumed the second half. Right from the off, both teams appeared to have changed roles. Carrick were now looking much more dangerous with several early raids down the right hand side, with the ball being crossed deep to the lurking forward at the far post. The match was now being played at a quicker pace, and in the 56th minute Carrick had claims for a penalty turned down after it appeared that Johny Addis may have pulled his man back. The first of the 3 Glentoran substitutions were made when Corey McMullan was replaced by Tiarnan McNicholl on a like for like basis. 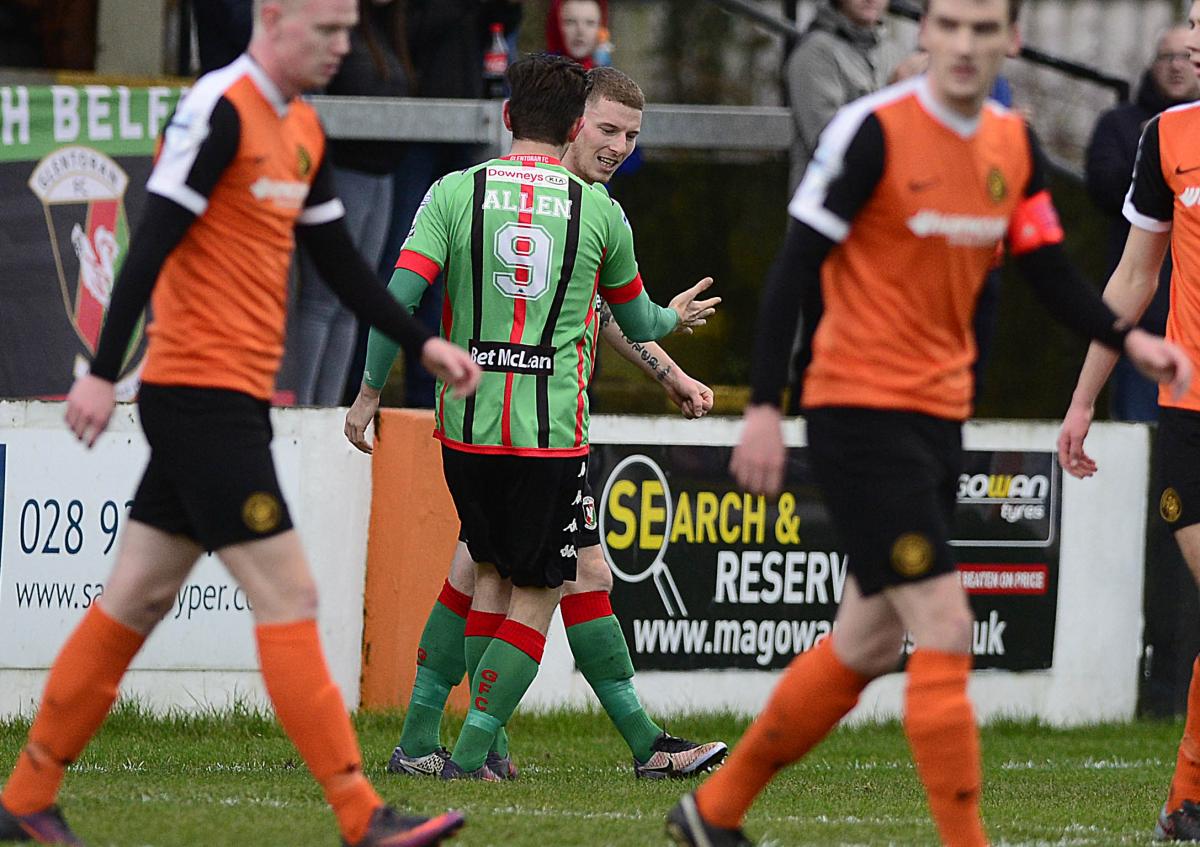 Although Carrick were looking dangerous, the Glens also had their chances. In the 53rd minute Curtis Allen was unlucky not to get on the end of an Eric Foley free kick. Only minutes later Robbie McDaid muscled aside two defenders and the keeper. The ball then fell to Kym Nelson for his drive towards goal forcing a good save before the linesman ruled for the off side. It was no surprise when eventually the continually struggling Davidson from his first half ankle injury was replaced by Daniel Kelly. Another substitution was more of a surprise, when the possibly still
rehabilitating from injury Eric Foley was replaced by Smith. This resulted in a change of format, with Smith parterning Curtis Allen up front and Robbie McDaid dropping back into mid field. 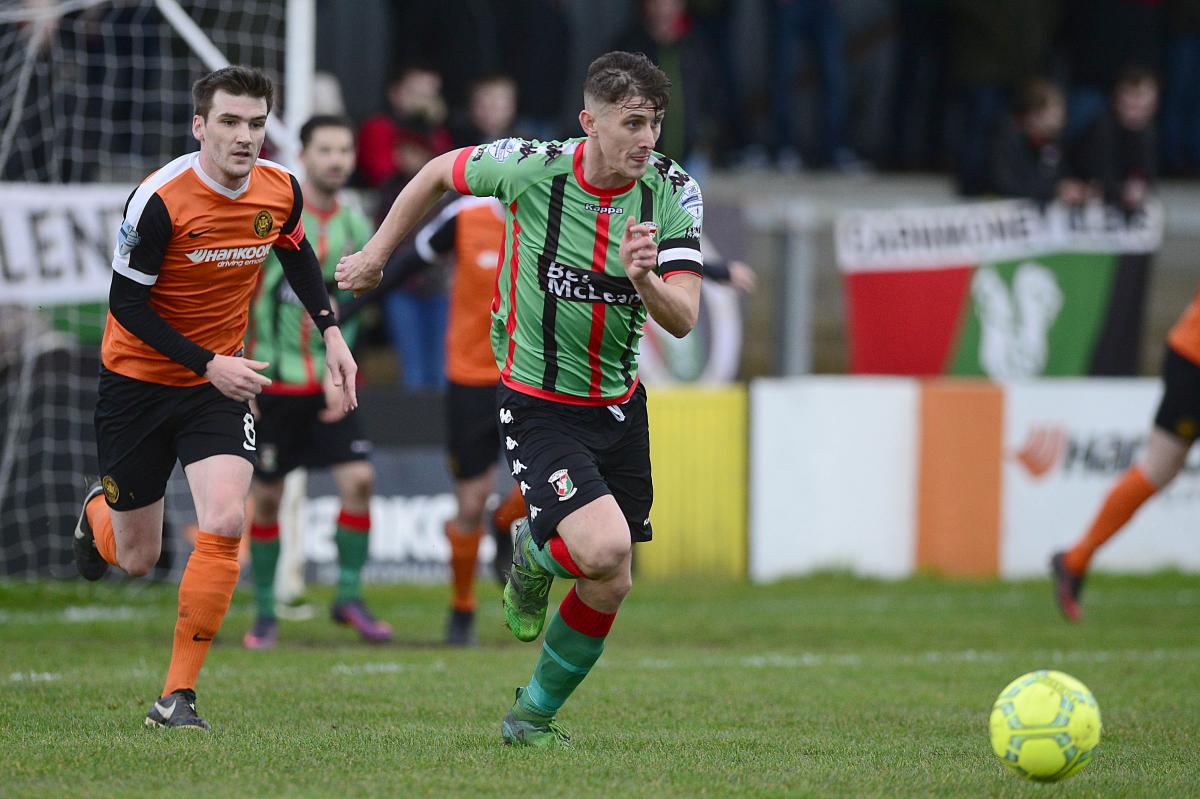 As has been the case in recent matches, the Glens were starting to play deeper and deeper and as the final whistle approached, the inevitable happened. As the 4th official was about to put up his extra time board, Carrick again attacked but this time our defence could not clear and the ever dangerous Lee Chapman slotted home for the equaliser, proving to be the final match score. 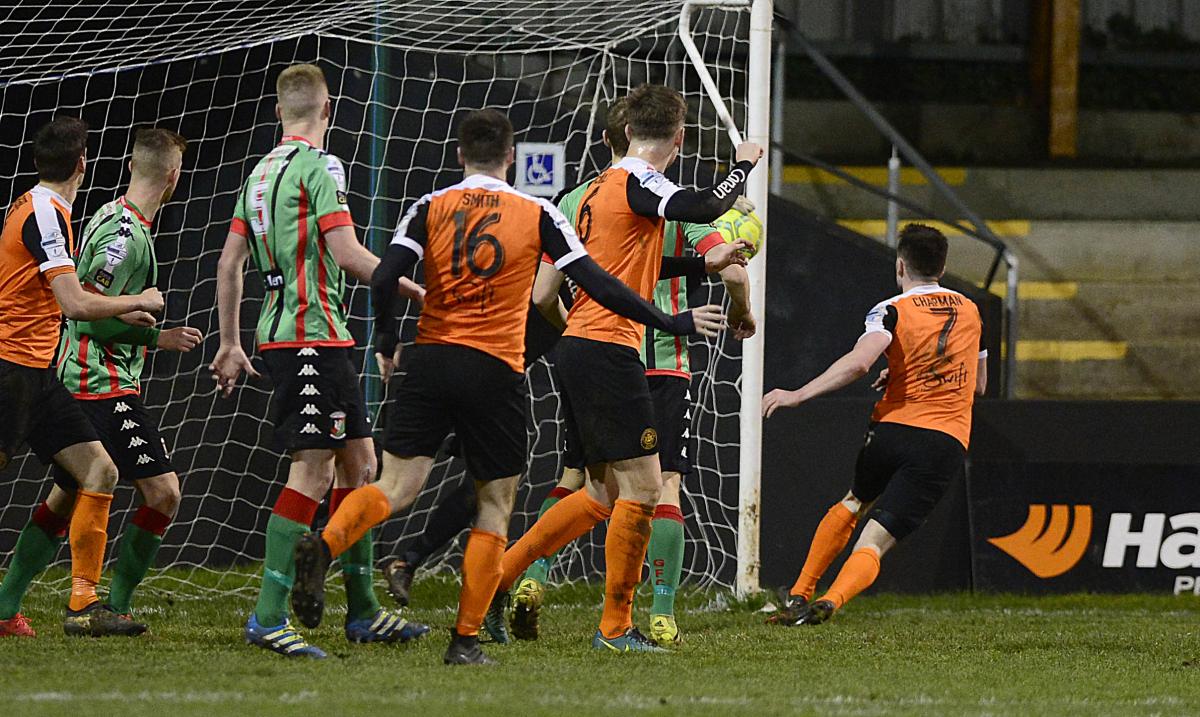 Another two points lost in our battle to finish in the top 6. How very disappointing in a match which, based on our first half performance we should have won - but in the end Carrick deserved a draw. It appears to be part of a pattern were we do not play to our strengths, and when the hard work is done, the bus gets parked with the hand brake let off only too often. A massive response is needed on Boxing Day for some glimmer of footballing festive cheer.

Subs: McNicholl for McMullan, Kelly for Davidson & Smith for Foley. 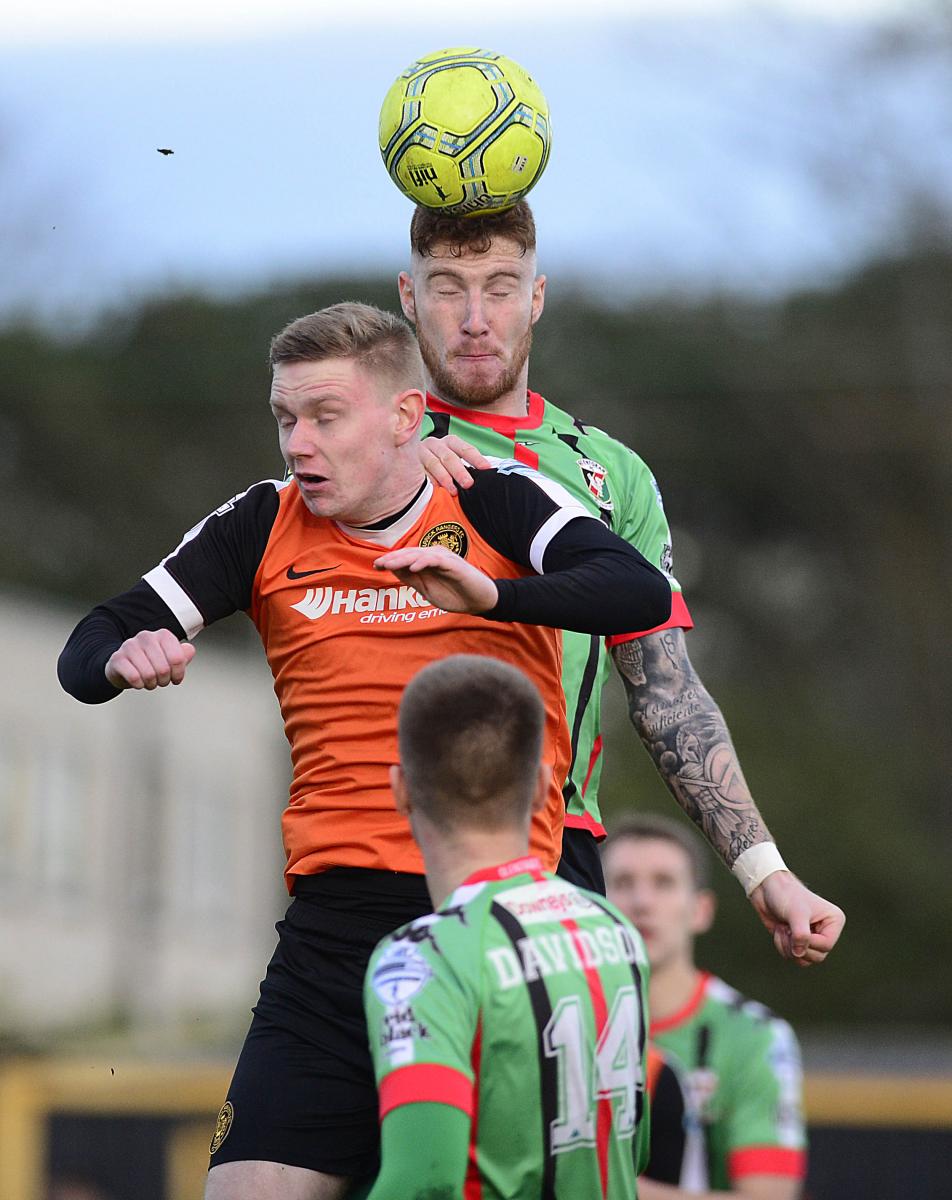