On the evening of the 4th May 1941 and in the early hours of the following morning, the lives of the people who make up the community which exists around the home of Glentoran Football Club, were about to change forever.

This afternoon, on the 80th Anniversary of those tragic events, Glentoran Football Club paid heartfelt respect to those in East Belfast and the wider city who suffered or died that terrible night in the Belfast Blitz. Directors, staff and volunteers of the club gathered in a socially distanced manner at the Oval’s World War Two pillbox for a service conducted by the Club Chaplain.

As covid-19 restrictions made it impossible for a wider audience to attend the service, it is reported in full below. 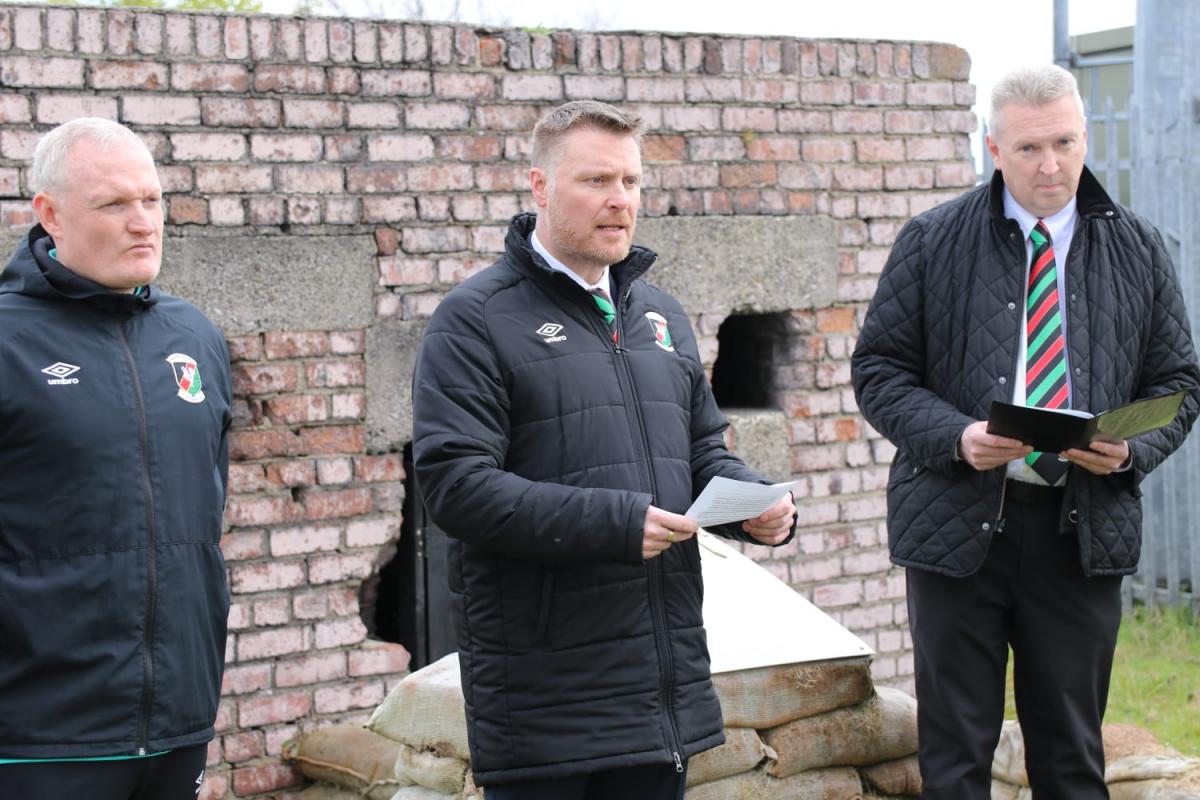 The ceremony was started by a lone piper after which Glentoran Chairman Stephen Henderson addressed those present:

“Today we gather to solemnly mark the terrible events that befell our city, our community and our club exactly 80 years ago today.

On the 3rd May 1941, our supporters, many taking a break from building warships, planes and munitions, gathered at the Oval to watch our team defeat Cliftonville 6-3 in a Regional league match. Little did any of the players that left the field that day or any of the thousands of supporters that filed out of the Oval know, that it would be the last time for eight years that football would be played here.

At 9.45pm the following evening, after a beautiful sunlit day had given way to a still, cloudless night, the 200 German bombers of the Kamfegruppe 100 squadron, left the airfields of Northern France and headed towards Belfast.

Belfast, virtually undefended, lay beneath a Bombers Moon. In this Type 24 Pill box behind me, on the highest point in Belfast’s industrial heartland, men of the 7th Battalion of the Gloucestershire Regiment, stood sentry and witness to what was about to happen.  At 1.02am, the first wave hit, disgorging their incendiary, high explosive and parachute mines. Within 30 minutes, Harland & Wolff and Short Brothers & Harland and the entire rim of Belfast Lough, from Greencastle to Sydenham was ablaze.

And still they kept coming. With the city lit up by incendiaries, the heavy bombers arrived. 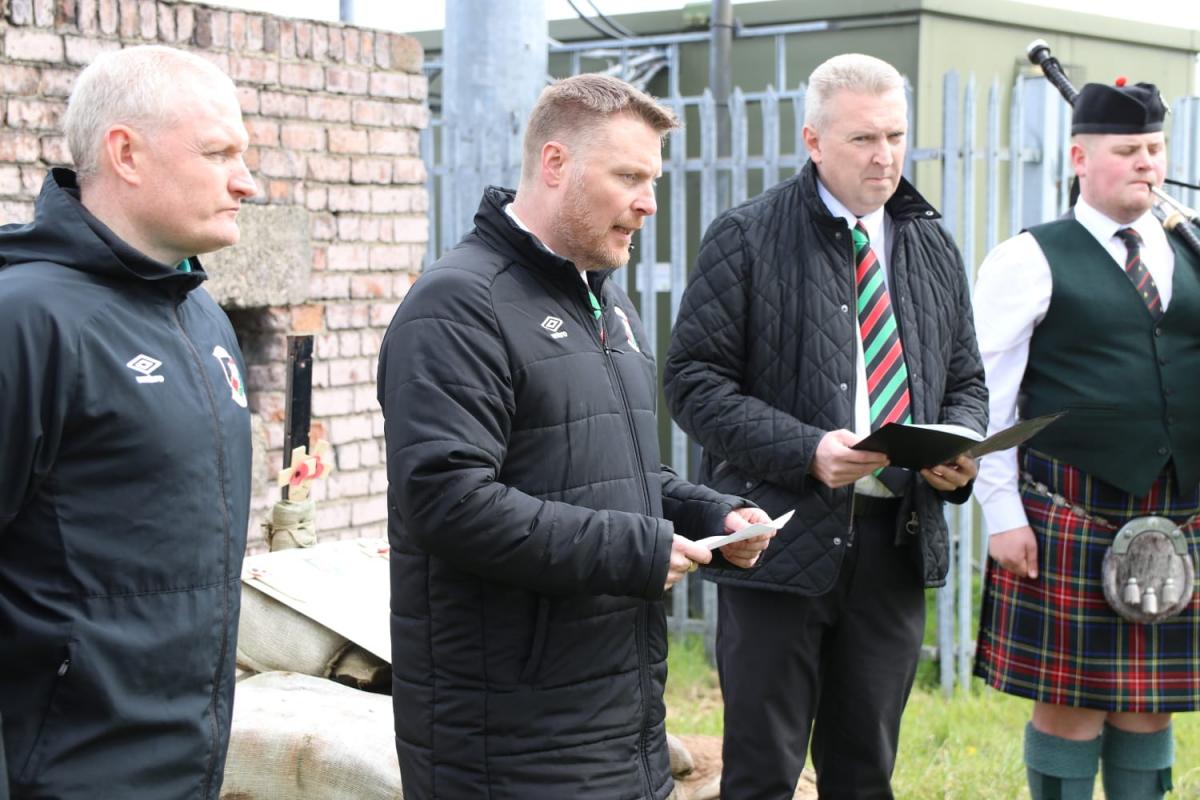 At 3.40am, Luftwaffe pilots reported having struck the oil installations around the shipyard. It was at this time, that the primary target of that raid on Belfast was destroyed. The Oval, mistakenly identified by German reconnaissance as a major Oil storage facility, was earmarked for destruction. The first bomb landed less than 30 feet from the Gloucesters, close to the Sydenham end corner flag just behind you, the second in the centre circle and the third at the Mersey Street school corner flag. The ground was totally destroyed, the damage allowing the Connswater to breach the outer wall and flood the crater. The Club lost everything, all our trophies, with the exception of the Vienna Cup, as it sat proudly on the then Chairman’s mantelpiece, all our records, all our written history and even our playing kits.

As the late Malcom Brodie recounted “To visit the Oval in the aftermath of the bombing was a strange experience. Your feet sank ankle deep in mud, water lay in pools all around. The grotesquely twisted steel structure of the unreserved stand and the rusted track railings looked sadly out of place. Emblems of another age. Everything was Cathedral quiet, the silence only broken by the throb, throb, throb of the pump and the occasional train passing on its way to Bangor.”

At the board meeting on 24th July 1941, a proposal for Glentoran to cease playing football was tabled and only but for the casting vote of the Chairman, Toby Mercer, the club would have ceased to exist. The long hard road of rebuilding the club and the ground from the Ashes would take eight long hard years to complete, but brick by brick, completed it was.

My own Mother, safely evacuated as a very young child to Dundrod, knew nothing of the fact that her street, Barbour Street in Greencastle was gone. Over thirty family, friends and neighbours gone in the blink of an eye.

We are gathered here today, eighty years on, to remember them all”. 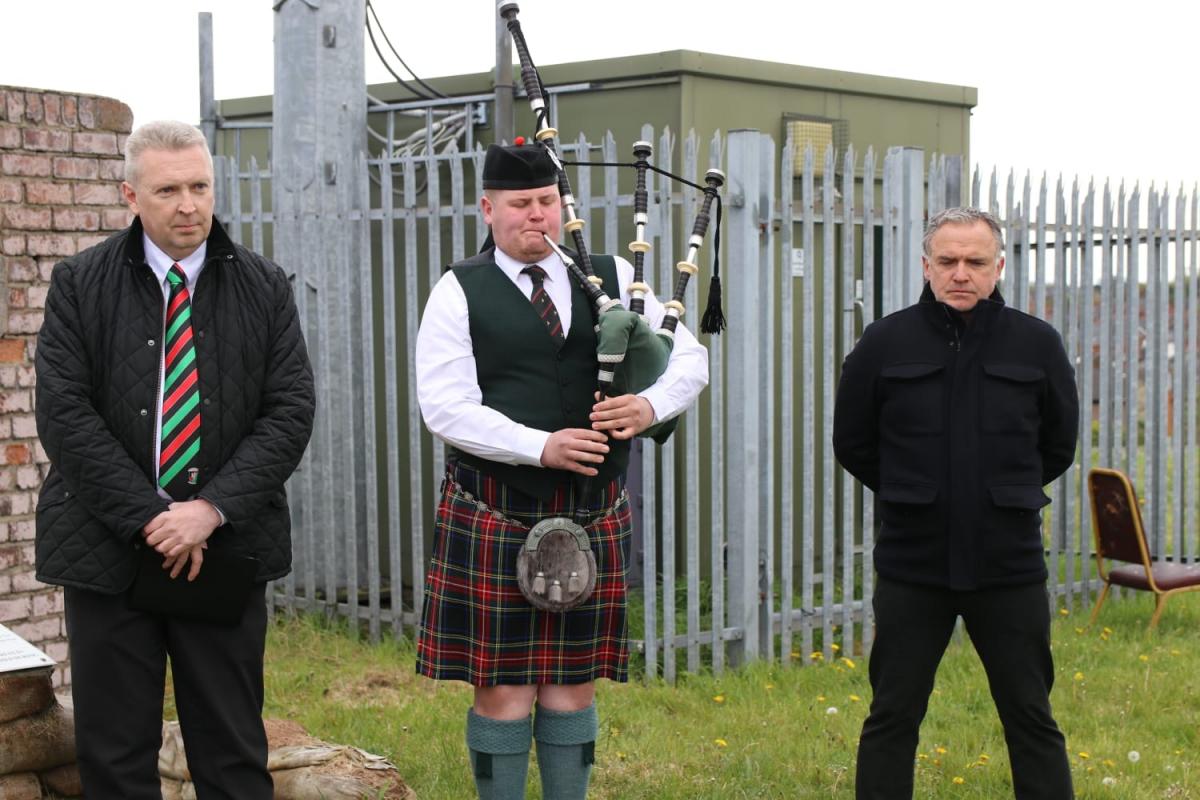 As we gather here today to mark the 80th anniversary of the Belfast Blitz, we do so in a place that was physically marked by the awful events of the early hours of the 5th of May 1941. The Oval and surrounding streets were decimated by the bombing, with homes reduced to rubble, lives lost, and a community left deeply scarred. It was a long time ago – in many ways, a world away – but as the Glentoran community we pause for one minute’s silence to remember the suffering and fortitude of those who have gone before us, and by whose determined resilience this community and its football club was subsequently rebuilt.

Today this community and this football club that carries so much of its sporting identity, face a different set of challenges arising from the ongoing impact of the Covid-19 pandemic. So, as we close this act of remembrance of the suffering and challenges of 80 years ago, let’s take a moment or two to think about our community today.

You may want to enter into what we are about to do as a prayer if that is your tradition or belief. If not, it provides a simple opportunity to reflect, take stock and reset your heart and mind to play your part in rising to the challenges before us today.

Lord of the years,

We thank you for this community of East Belfast.

for the place it occupies in the wider life of the city of Belfast and Northern Ireland.

Today we have remembered events of 80 years ago, which we didn’t experience first-hand, but which we know shattered - and then re-shaped - the life of a people and a place.

We give thanks for the fortitude and resilience, strength and sacrifice, of the generation who experienced the Belfast Blitz and its aftermath;

who saw their lives reduced to rubble, yet regrouped and ensured this community and it’s football club recovered and rose again from the ashes.

In our generation, give us similar resolve and commitment to play our part individually and as the Glentoran community, in rebuilding life together as we emerge from the Covid-19 pandemic, in bringing hope, restoring joy, shaping and sharing in a better future.

Hear these our prayers and desires.

The service concluded to the sound of the lone piper playing a lament. 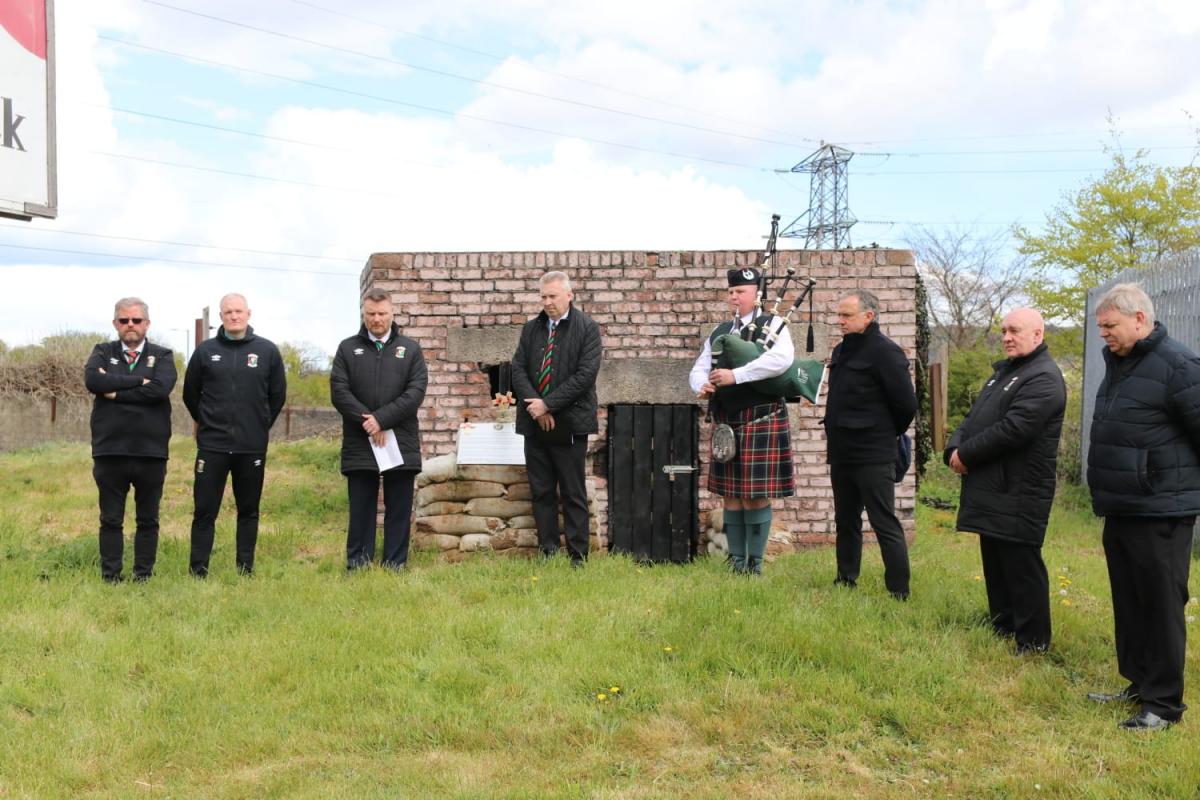