With 12 minutes remaining, Glentoran led 2-nil and looked like securing the 3 points which would have seen them climb to 2nd in the Danske Bank Premiership. A late Shay McCartan strike and an even later penalty, converted by the same player, meant that we could only leave the Showgrounds with a solitary point. 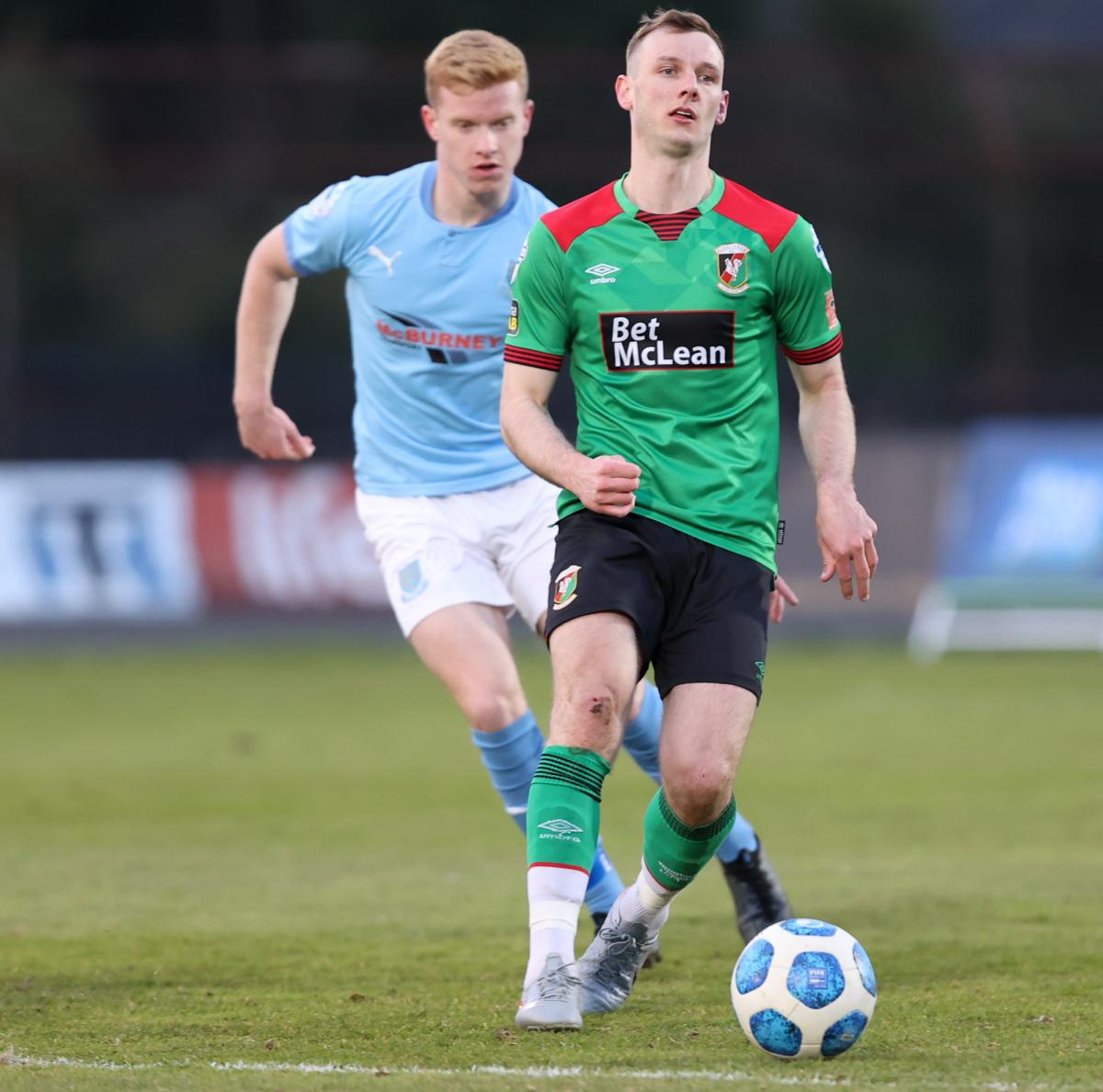 There was just one change to last Saturday's starting XI with Seanan Clucas coming in to replace Hrvoje Plum.

The Glens went on the attack straight from the kick off and Sky Blues defender, Tony Kane received a yellow card for taking down Jay Donnelly with just a minute played. Gael Bigirimana took the free kick 25 yards from goal but his effort flew high and wide. Ballymena United were without their two first choice goalkeepers and young Dylan Graham, a former player with the Glentoran Academy, was between the posts. The young keeper did well to come and claim a cross from Marcus Kane with just 6 minutes gone. 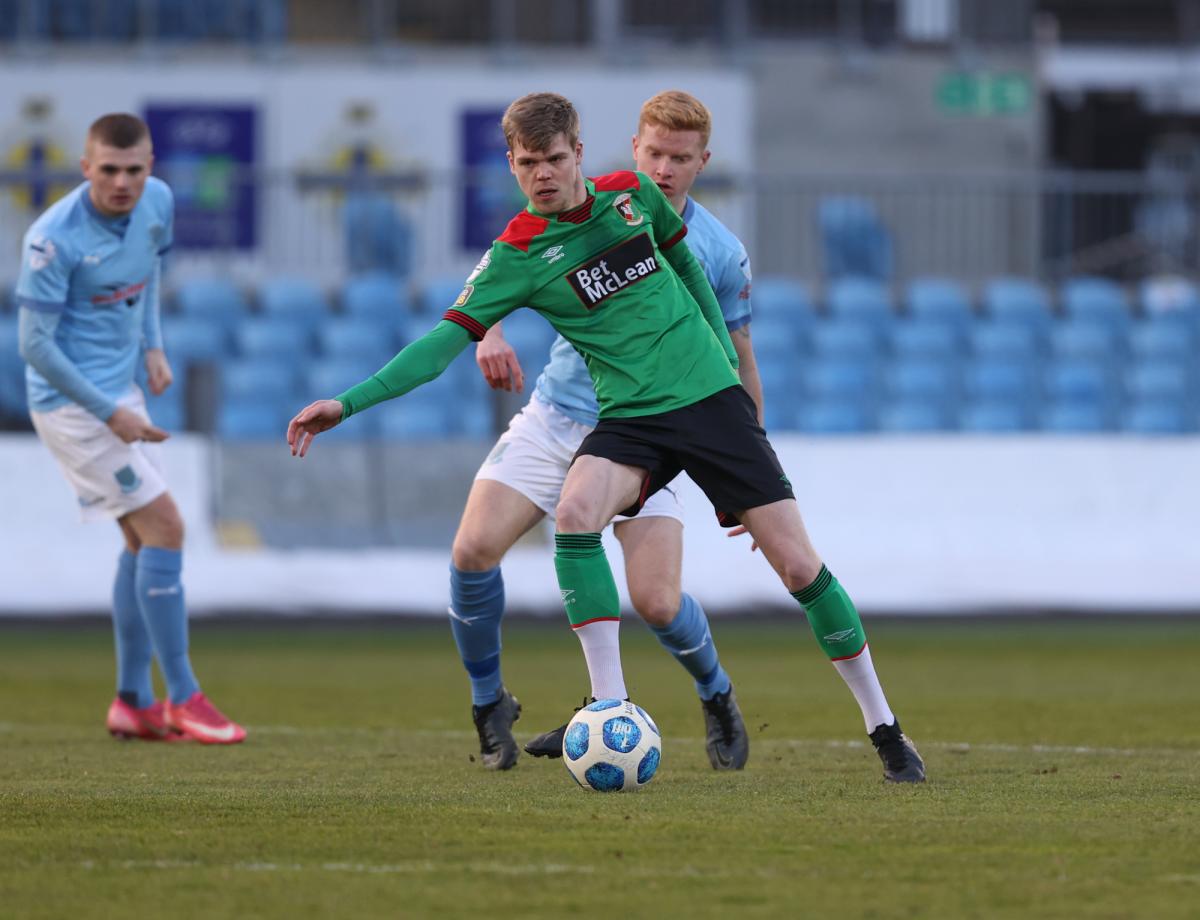 He won't want to remember his next action though! Seanan Clucas and Marcus Kane linked up well on the left before winning a throw in close to the 18-yard line. Kane found Clucas who went past a hobbling Tony Kane, driving to near the by-line. As most people expected him to cut the ball back, Clucas went for goal, the young goalkeeper letting the ball go through both his hands and legs to give the Glens the lead with a quarter of an hour gone. 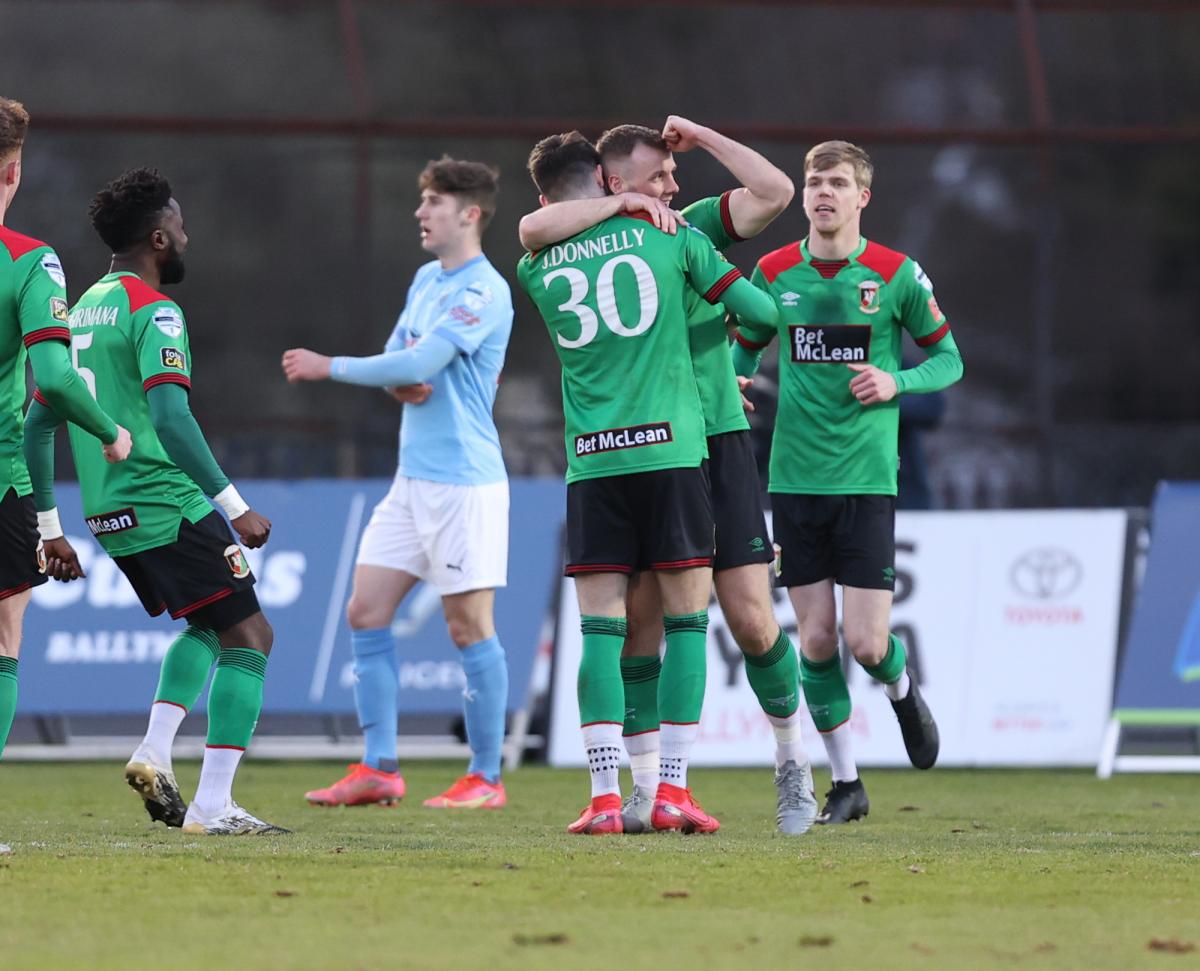 Ballymena United then had a couple of chances from set pieces fired into the Glentoran penalty area. Both fell to Ryan Waide but he failed to hit the target with either. Midway through the half the Glens had a great chance to doulbe their lead. Rory Donnelly got to the by-line and cut the ball back into the path of Robbie McDaid but the Glentoran marksman blasted over. The Glens were dominant at this stage and a free kick into the area from Marcus Kane broke kindly for Rory Donnelly but he too shot over. 6 minutes from halftime another Glentoran attack saw Robbie McDaid race clear. Robbie opted to go it alone when perhaps looking to play in one of his 3 team mates who were in the penalty area might have been a better option. 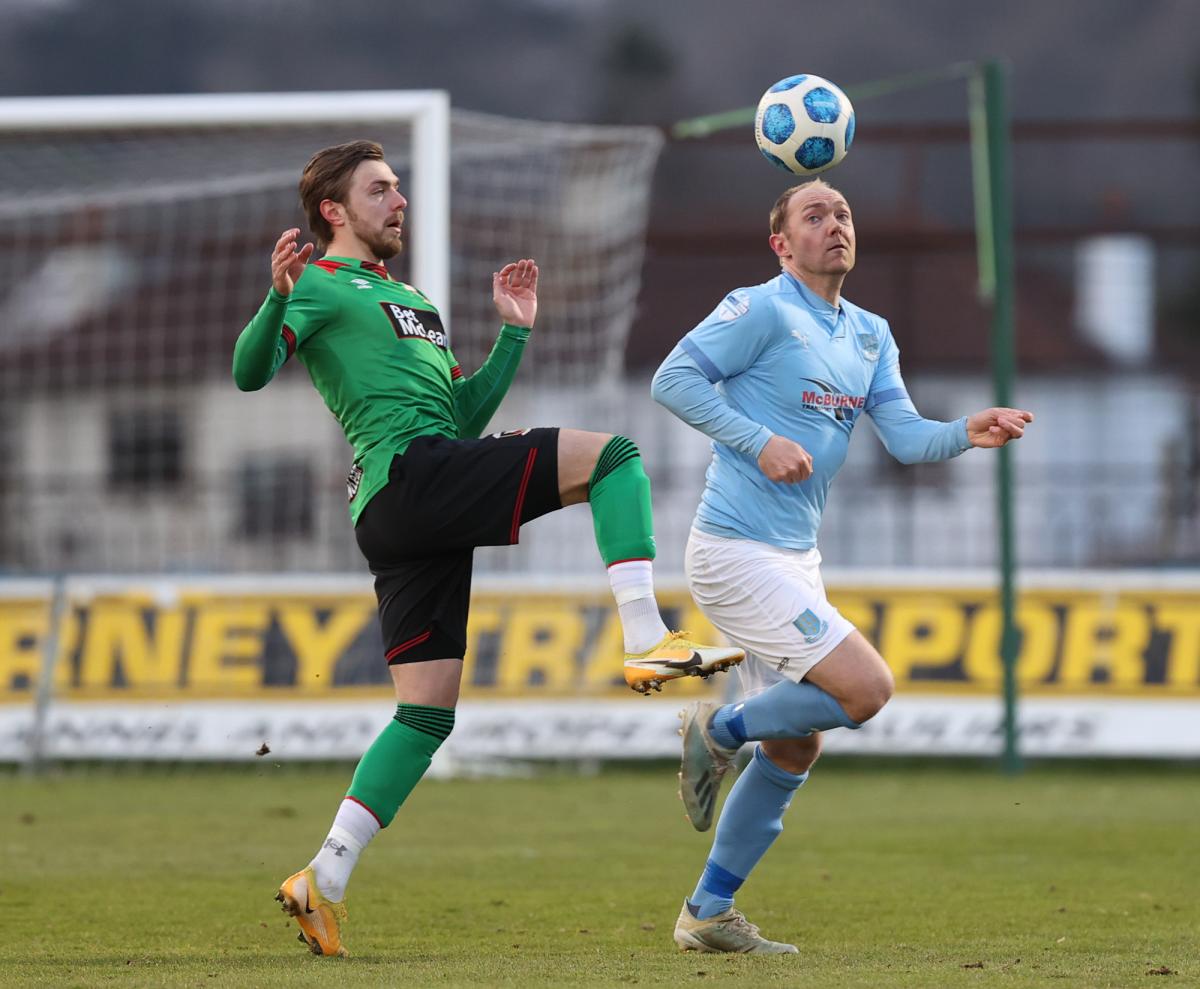 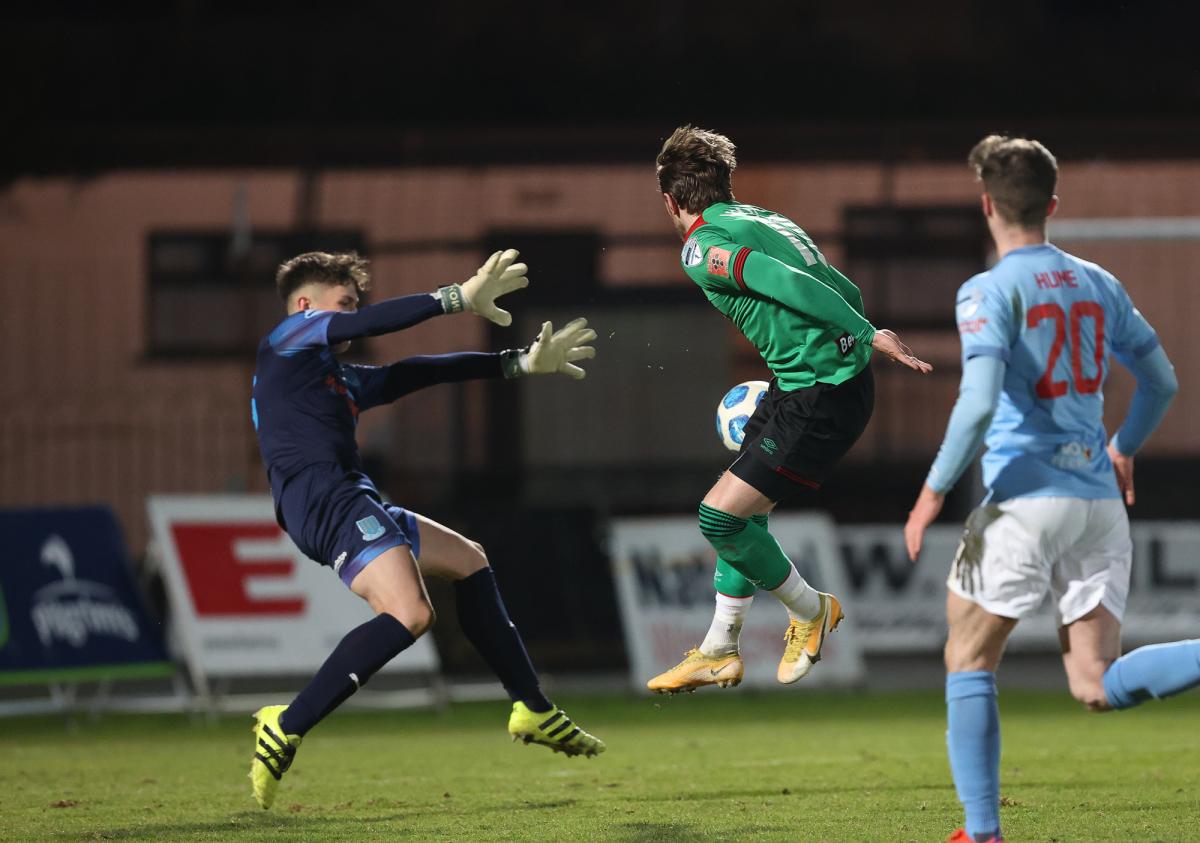 The home side showed a lot more intent at the start of the second half and Shay McCartan went past both Luke McCullough and Caolan Marron before seeing his goalbound effort superbly cleared by Paddy McClean. On 52 minutes the Sky Blues had a penalty claim waved away when Trai Hume went over very easily in the box - nothing given. A couple of minutes later the Glens were denied by a goal line clearance. Caolan Marron put a cross into the area and Jay Donnelly's looping header went over the keeper but it was cleared off the line by Jim Ervin. Both sides came close just after the hour mark. Rory Brown did well to save and hold onto, a powerful shot from Waide whilst at the other end a Glentoran free kick, played into the penalty area, fell to Robbie McDaid. McDaid didn't strike the ball cleanly but it had beaten the keeper before Jonny Addis hacked it off the line. 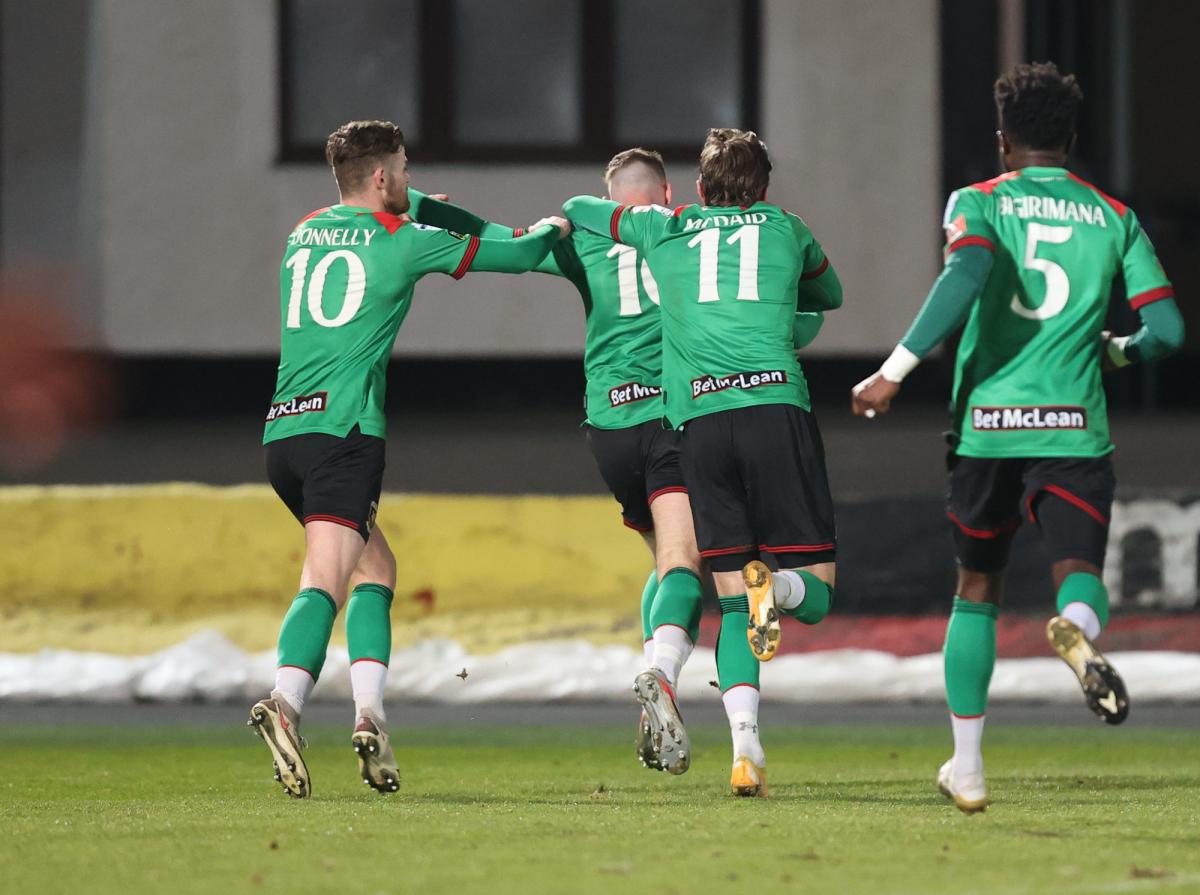 Glentoran's second goal arrived on 74 minutes. Great persistance from Seanan Clucas saw him rob possession from Joshua Kelly and head toward goal. From the left hand corner of the 6-yard box he curled a delightful shot past the helpless Graham. Game over? Unfortunately not! Just 4 minutes later Shay McCartan fired a low shot through a crowd of Glentoran players from the edge of the area and into the bottom corner of the net. The home side had their tails up now and went in search of an equaliser. They won a couple of free kicks, one of which looked goalbound until Paddy McClean's excellent header cleared the danger. The Glens couldn't get out though and following a succession of corners Cricky Gallagher, on for the injured Marcus Kane, was adjudged to have committed a foul in the box. Penalty. The TV footage and the two commentators felt there was little or no contact but referee Gregg pointed to the spot. Shay McCartan stepped up and placed the ball past Rory Brown to level things up. Both sides went for a winner but it proved elusive. 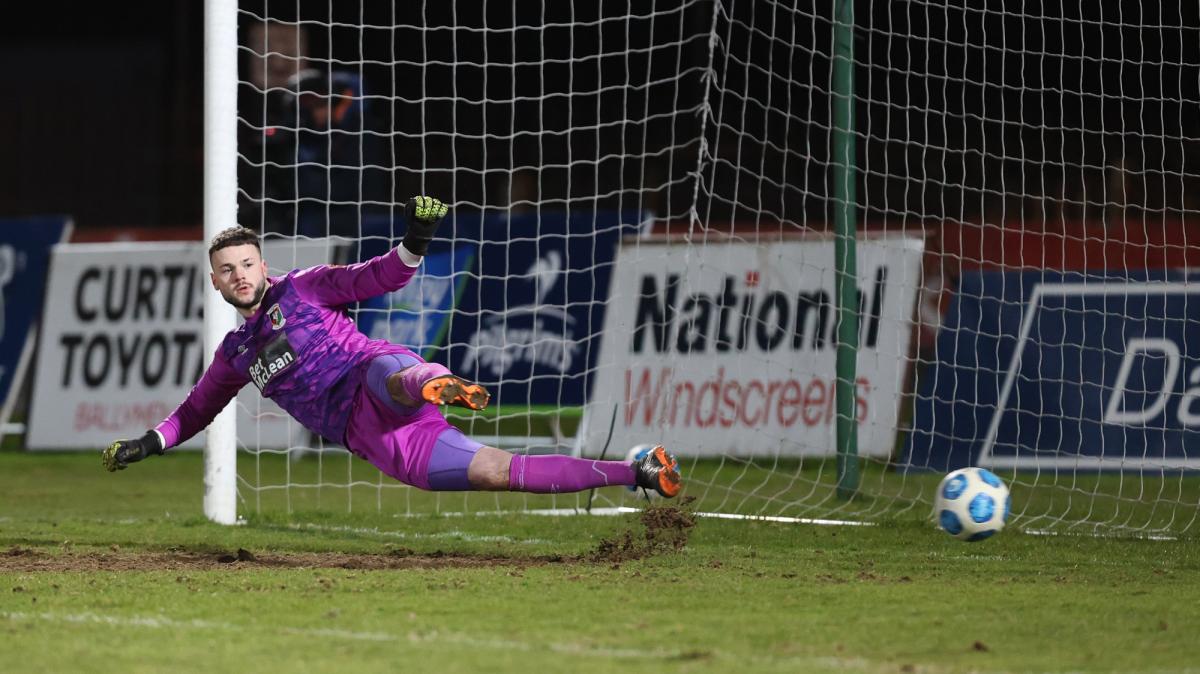 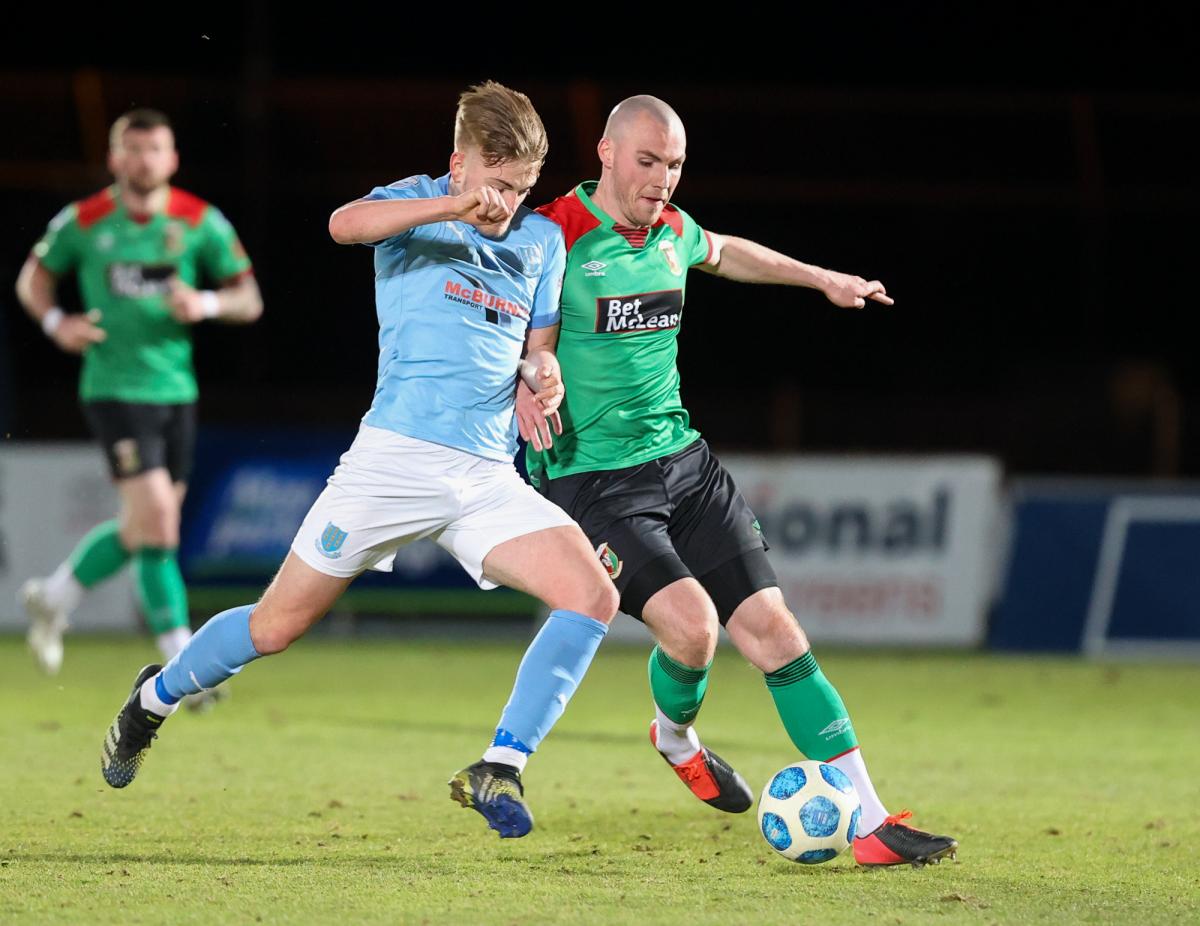