Glentoran took all 3 points in this afternoon's Danske Bank Premiership fixture thanks to goals from Marcus Kane, Curtis Allen and John McGuigan.

Manager Gary Haveron, went with the same starting XI as last week at a cold and wet Ballymena Showgrounds. The Glens first effort on goal came 4 minutes in but Curtis Allen's tame shot was easily dealt with by the United keeper. Ths home side had started brightly and on 10 minutes nearly edged in front. Slack play from the Glens saw them lose possession from a throw in. Kevin Braniff picked up the ball and fed Conor McCloskey but the Ballymena Utd number 11 was unfortunate to see his 18-yard effort come back off the crossbar. The in-form Cathair Friel then tested Elliott Morris but the Glentoran keeper, in excellent form again today, kept him out. 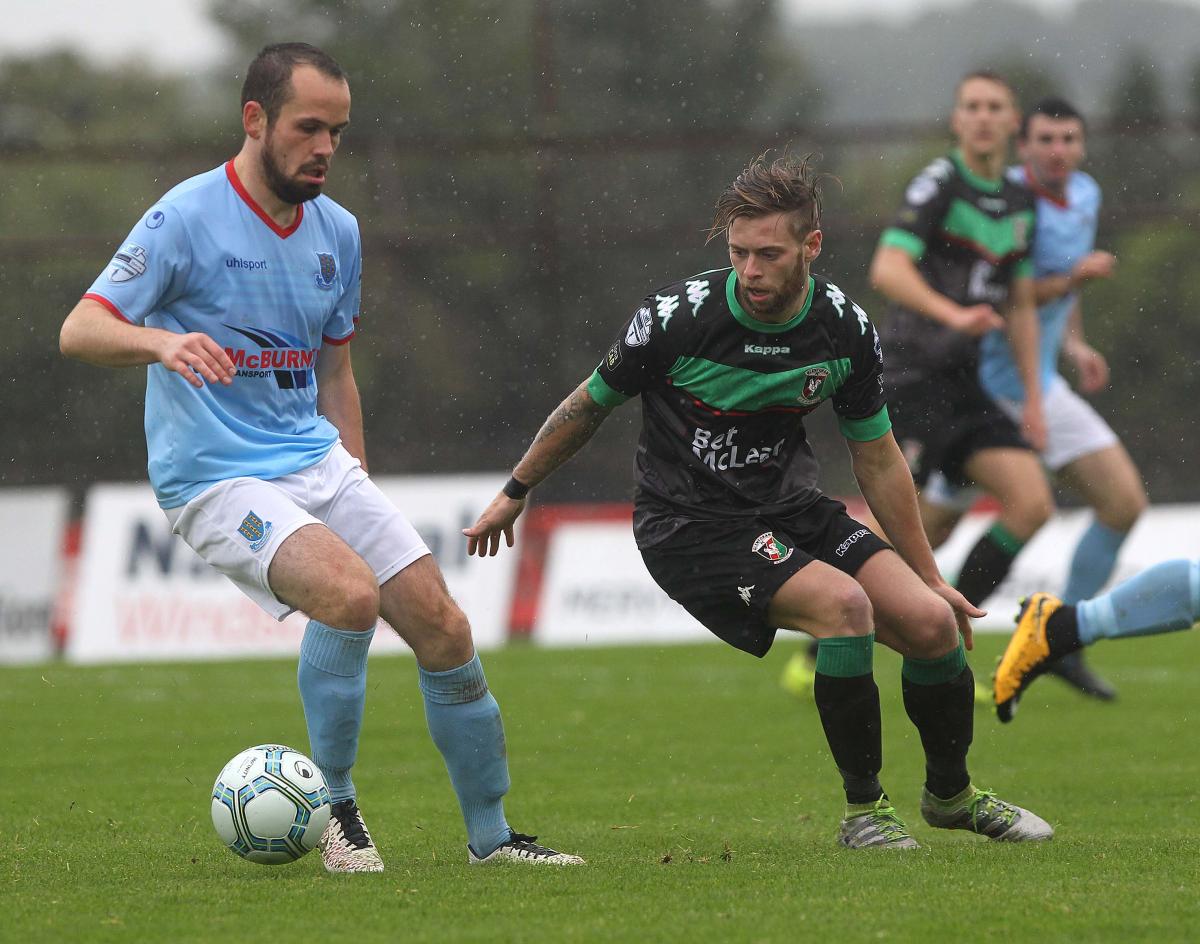 Both teams then struggled to create any worthwhile chances. That was until the 28th minute when Corey McMullan's superb through ball found John McGuigan. Conor Brennan, the Utd keeper, forced him wide but McGuigan then turned and curled a delightful shot towards the far top corner of the net. Fortunately for the Sky Blues, Tony Kane was on hand to head the ball off the line. A minute later though, the deadlock was broken. Jim Ervin fouled John McGuigan out near the left touchline. Ross Redman curled the free kick into the danger area and with Brennan coming and getting nowhere near the ball, Marcus Kane's header found the empty net. 1-nil Glentoran. A minute later it was almost 2-nil. James Knowles and Ross Redman combined well on the left and the full back's cross was mis-controlled by Michael Gault. In nipped Robbie McDaid but his shot on the turn flashed just wide of the post. 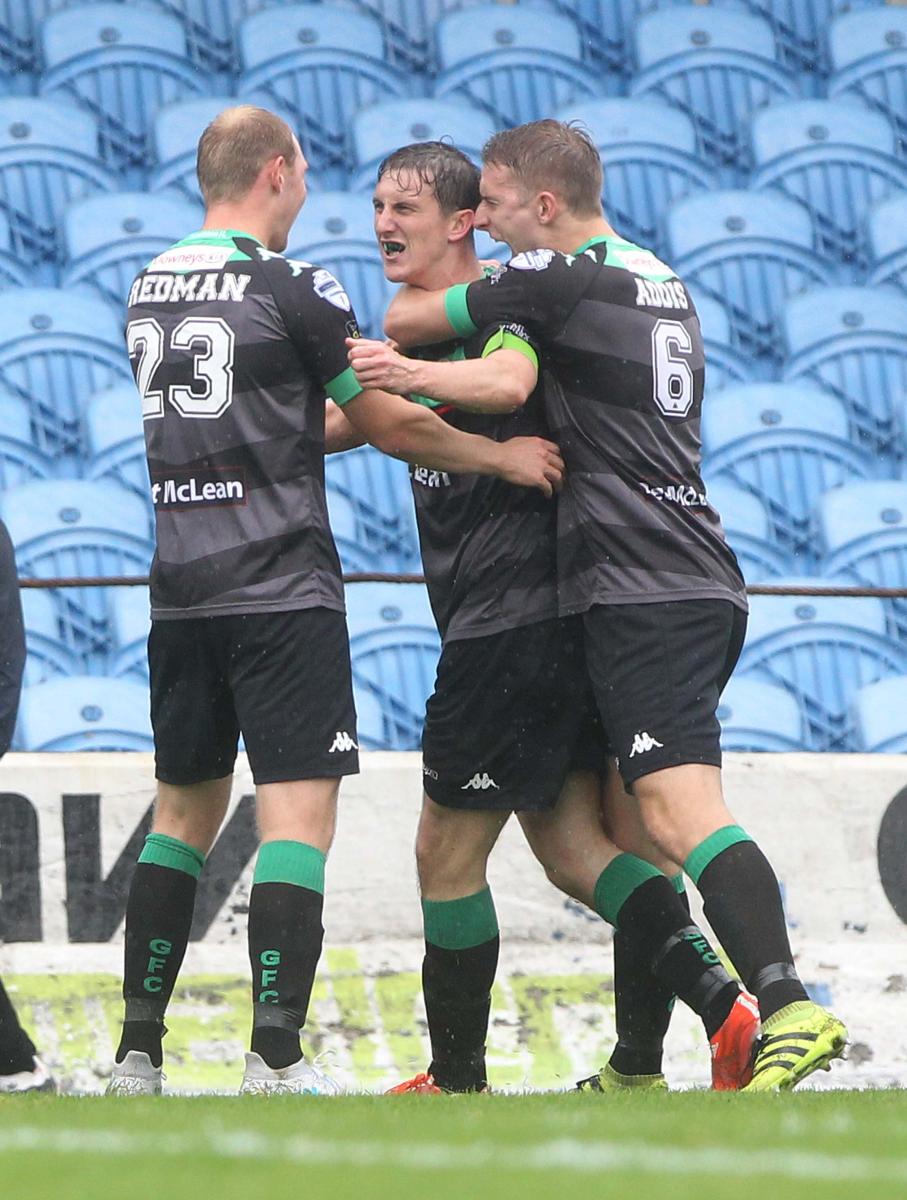 On 38 minutes the United skipper, Ervin shot from the edge of the area. Elliott Morris punched it clear but the ball fell to Friel. The United number 9 couldn't keep his shot down and the ball flew onto the race track. 2 minutes later Ervin went close again with a low drive which went narrowly wide of Morris' right hand post. The Glentoran keeper was a busy man and just before the interval he was called into action again when Steven McCullough's cross from the left found the head of Conor McCloskey. Morris would not be beaten though and the Glens went into the interval thanks to some excellent saves by him and suoerb defending, particularly from the Glentoran centre backs, Jonny Addis and Calum Birney. 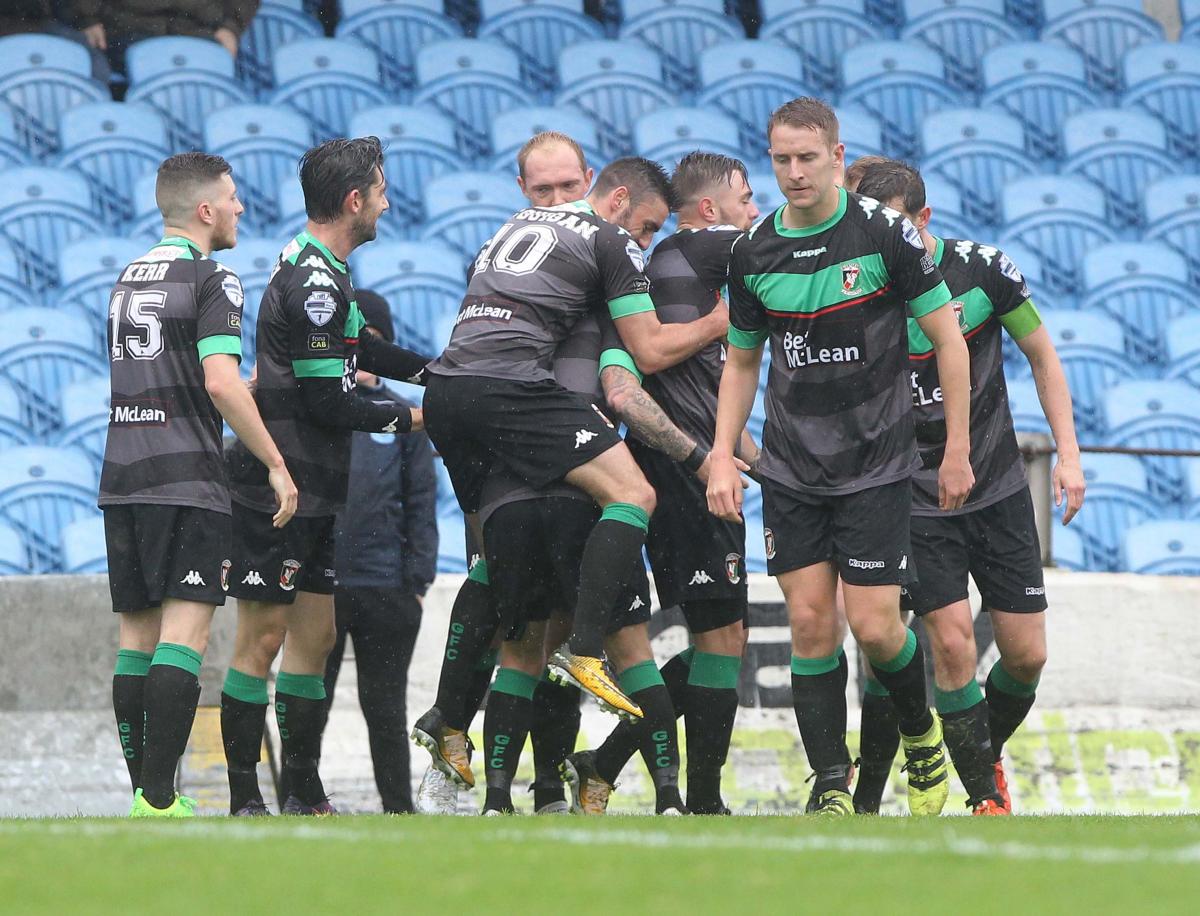 Ballymena United started the second half strongly, going in search of an equaliser. Elliott Morris dealt easily with a shot from Cathair Friel and then Tony Kane was well wide with a long range effort. 10 minutes into the second period Gary Thompson had a chance but again Morris stood firm. Nathan Kerr, who had another solid game at right back, then did well to block Steven McCullough's goal attempt before the Glens, against the run of play, doubled their lead. John McGuigan's corner was headed clear by Kyle Owens. McGuigan picked the ball up again though and fired it back into the danger area where Curtis Allen nodded it past Brennan from 6 yards out. 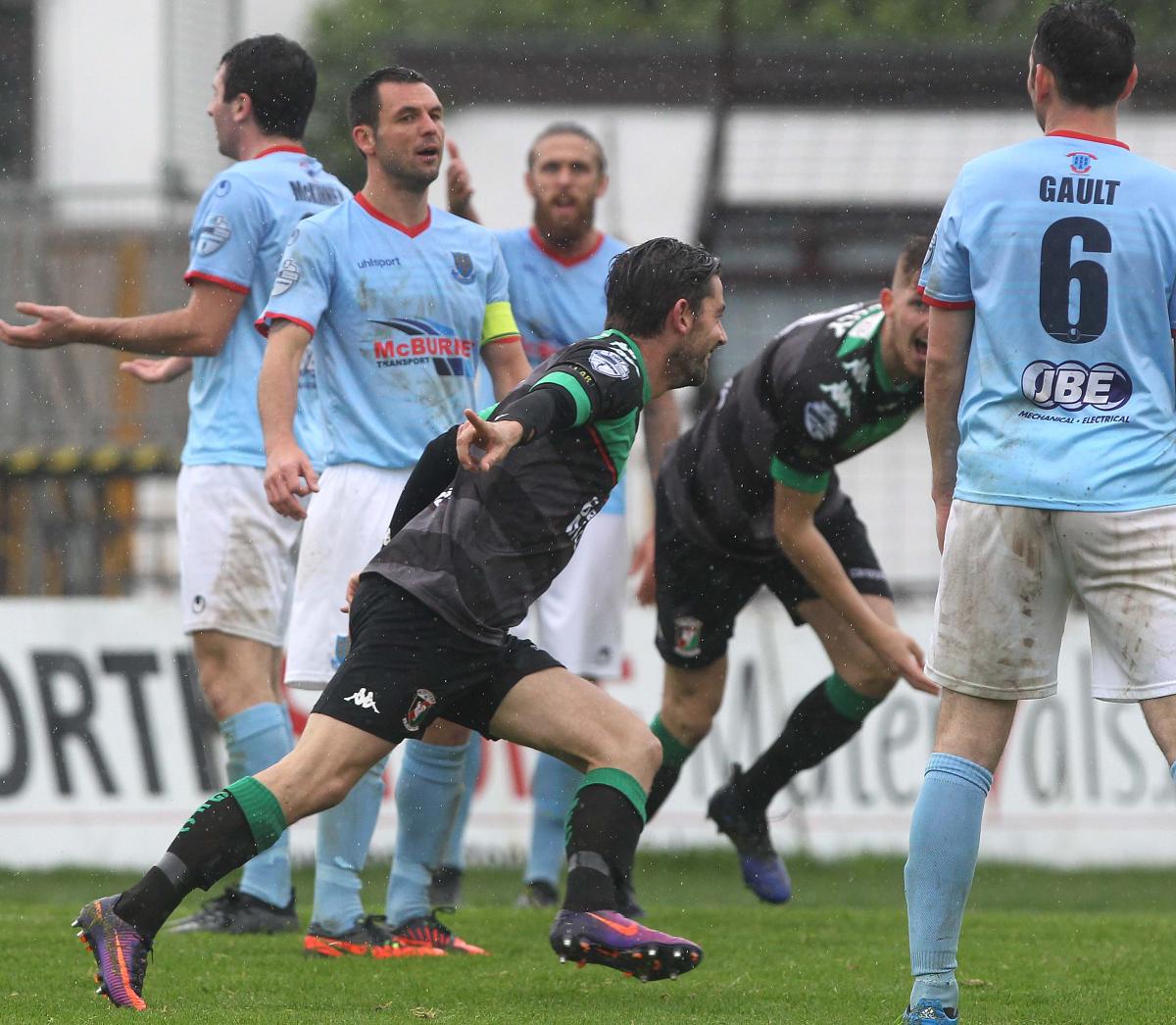 2 minutes later though, the home side were back in it. A long throw in from the right was flicked on by Owens and then Tony Kane turned it back goalwards from just beyond the back post. Cathair Friel's first effort was blocked by Corey McMullan but the ball broke again to Friel and he found the bottom corner. Curtis Allen curled a shot just wide on 65 minutes whilst at the other end, Cathair Friel shot straight at Morris. On 73 minutes the Sky Blues almost drew level. KAne's cross from the right found Conor McCloskey but his header struck the crossbar. 15 minutes from time the Glens could have wrapped the game up. A McGuigan corner was met by Jonny Addis but his header was cleared off the line. The ball was played back into the box and Calum Birney met it at the back post only to see his header flash wide. 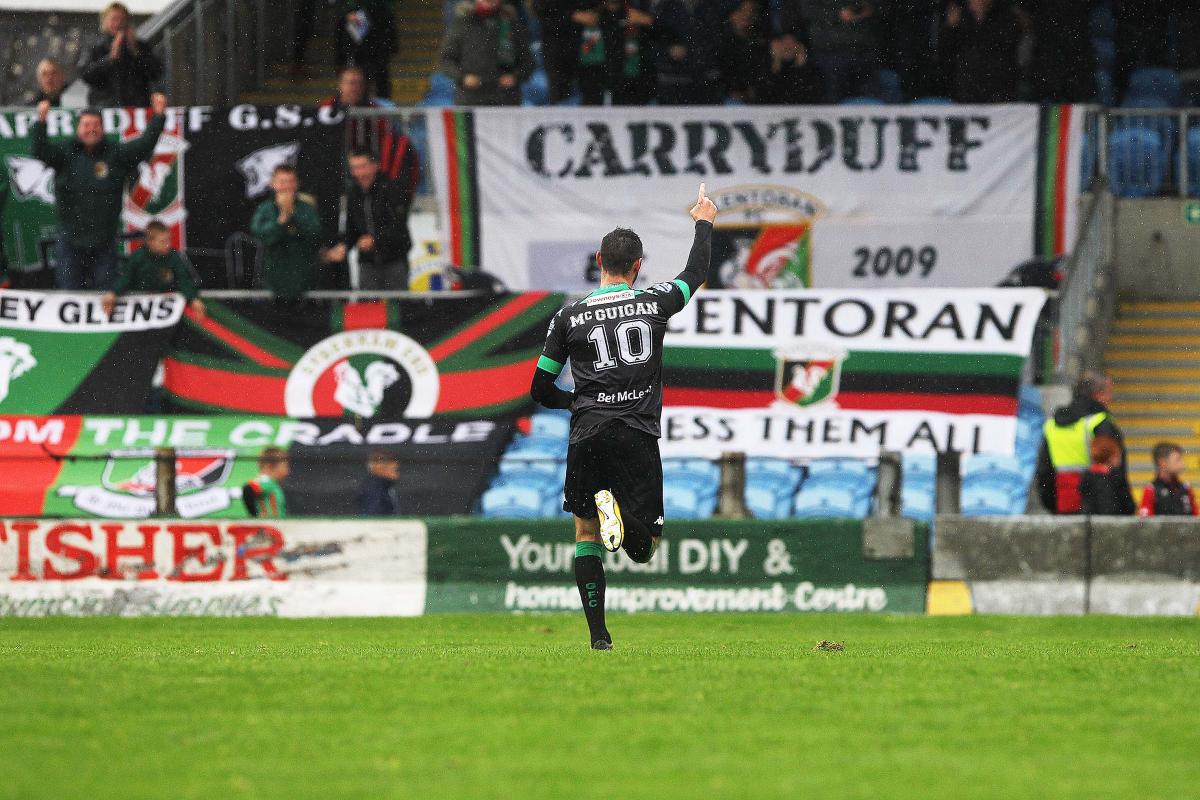 On 82 minutes the Glens got their third and secured the points. Owens committed a needless foul on Allen out on the left touchline and John McGuigan's curling and dipping free kick completely fooled Brennan and found the top corner. Substitute Steven Gordon almost made it 4 when he got on the end of another McGuigan free kick but his overhead kick struck the post. All in all another excellent, hard working performance from Glentoran to maintain their 5th position in the Danske Bank Premiership. Next up in the league is a home game against in-form Coleraine who have started the season with 7 straight wins. Before that though the Glens are in action in the Co Antrim Shield when they take on Crumlin Star at the Oval on Tuesday night (ko 7.45pm). 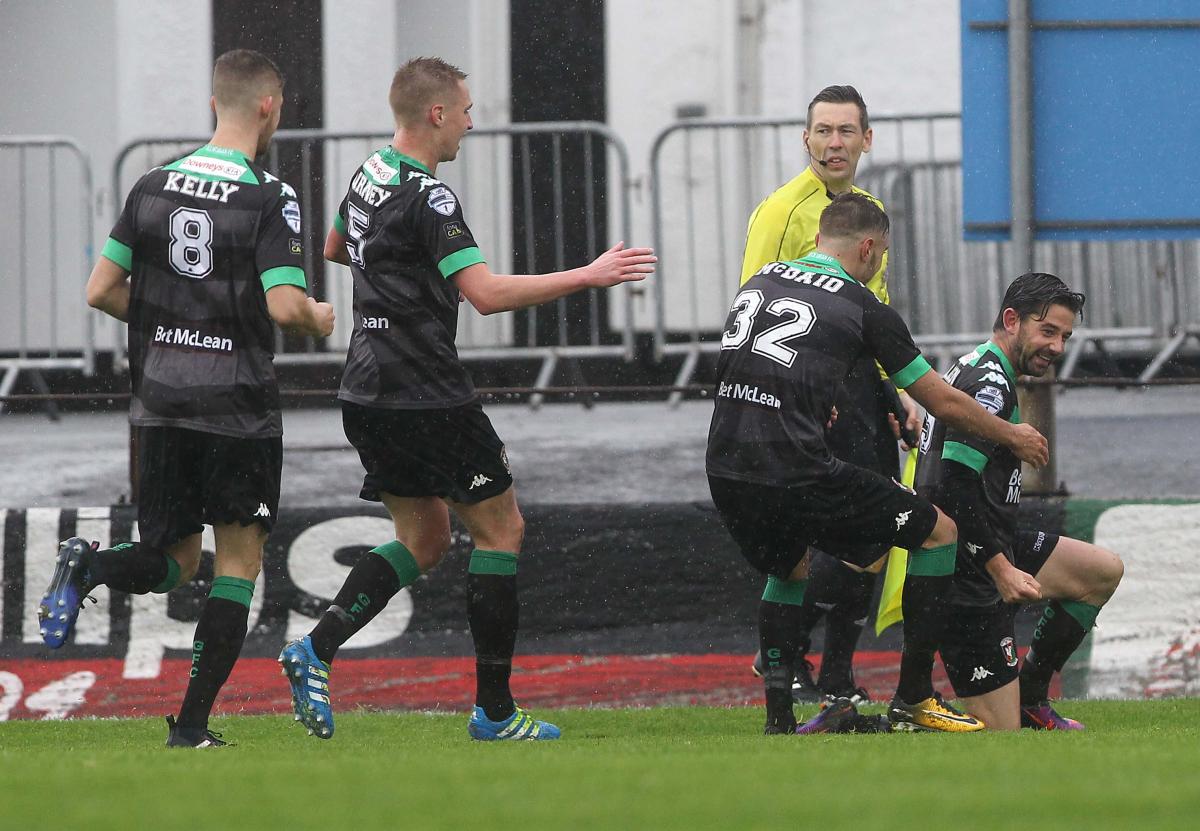 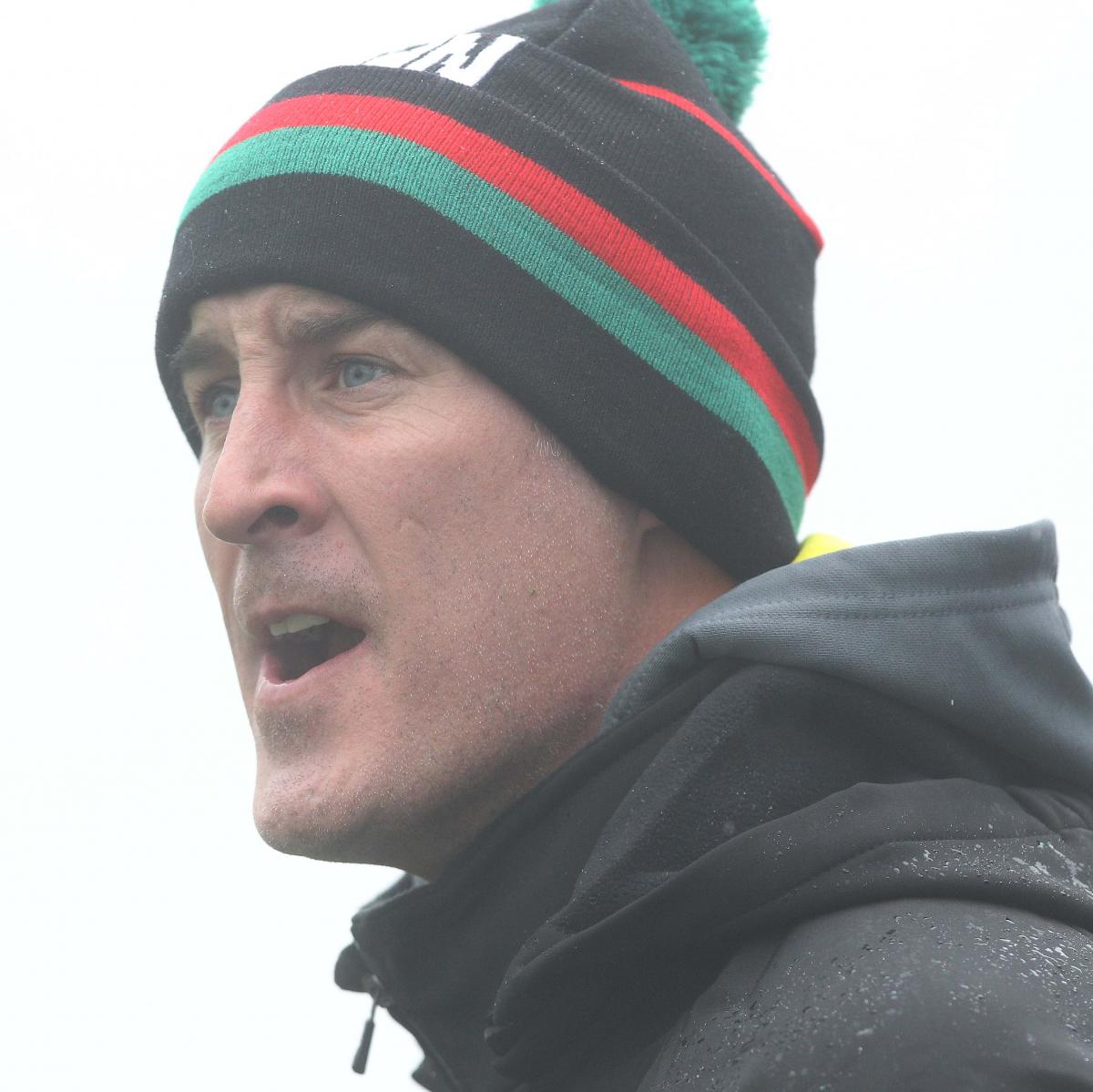