An injury time goal from James Knowles rescued a point for Glentoran at Ferney Park in today's Danske Bank Premiership encounter. It was a game in which the Glens had enough chances to win but on the balance of play probably should have lost!

Calum Birney was missing from the starting eleven due to an injury picked up in last week's Tennents irish Cup win. Also out today was Nathan Kerr due to illness. Dan Kelly covered for Birney in the centre of defence whilst Tre Sterling came in at right back. Also back in the starting line up was John McGuigan following a number of months out with injury. 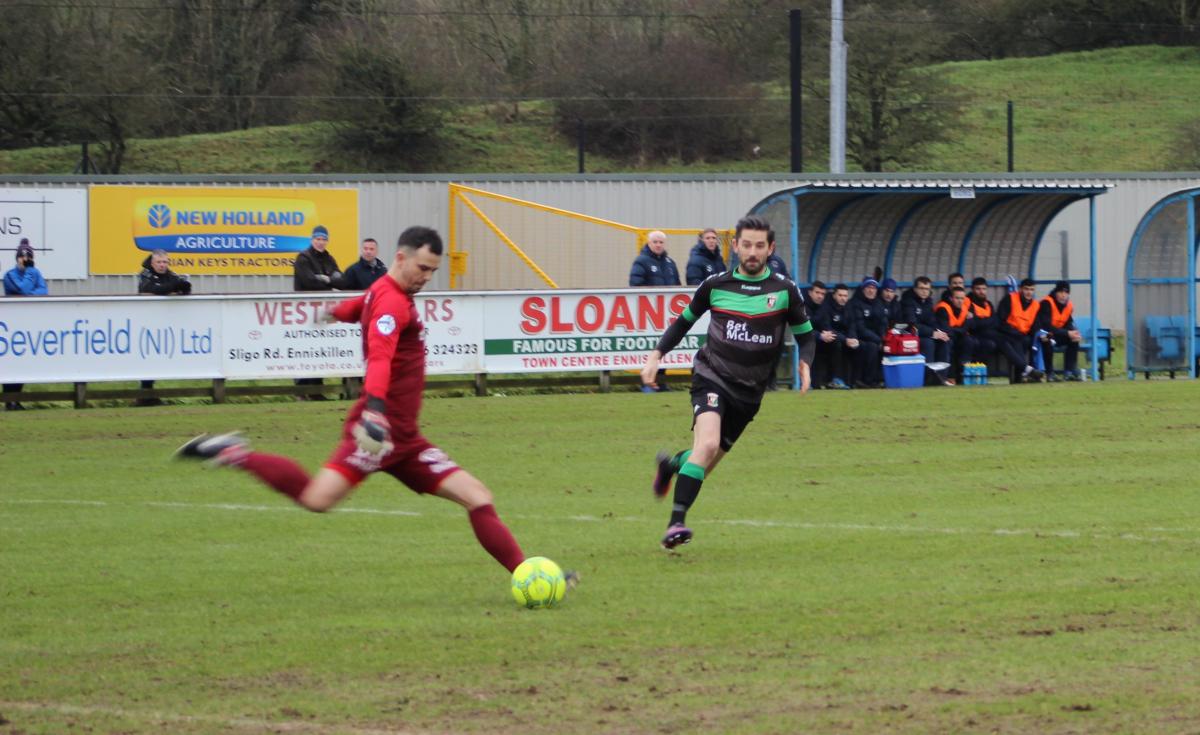 The recent adverse weather conditions meant that the Ferney Park pitch wasn't quite up to its normal standard and that, coupled with the wet conditions made it hard for either team to really get going. In the early minutes the only real chance fell to the Glens. McGuigan and allen combined with the Glens leading marksman being put in on goal. Richard Brush did well to turn the ball behind for a corner. Dylan Davidson took the set piece and when the ball came back to him he sent a superb cross back into the danger area. Jonny Addis got to the ball but saw his header go wide. On 13 minutes the home side went in front. The Glens, trying to play the ball out from the back, conceded possession to James McKenna. He found Shane McGinty who in turn, played in Sean Noble. Noble's first time effort squirmed under the body of Elliott Morris to make it 1-nil to the home side. A couple of minutes later it might have been two but for the quick reactions of Elliott Morris who kept out a close range header. Dylan Davidson's cross from the left picked out James Knowles at the far post but the Glens midfielder failed to get a good connection on his shot and the chance was gone. 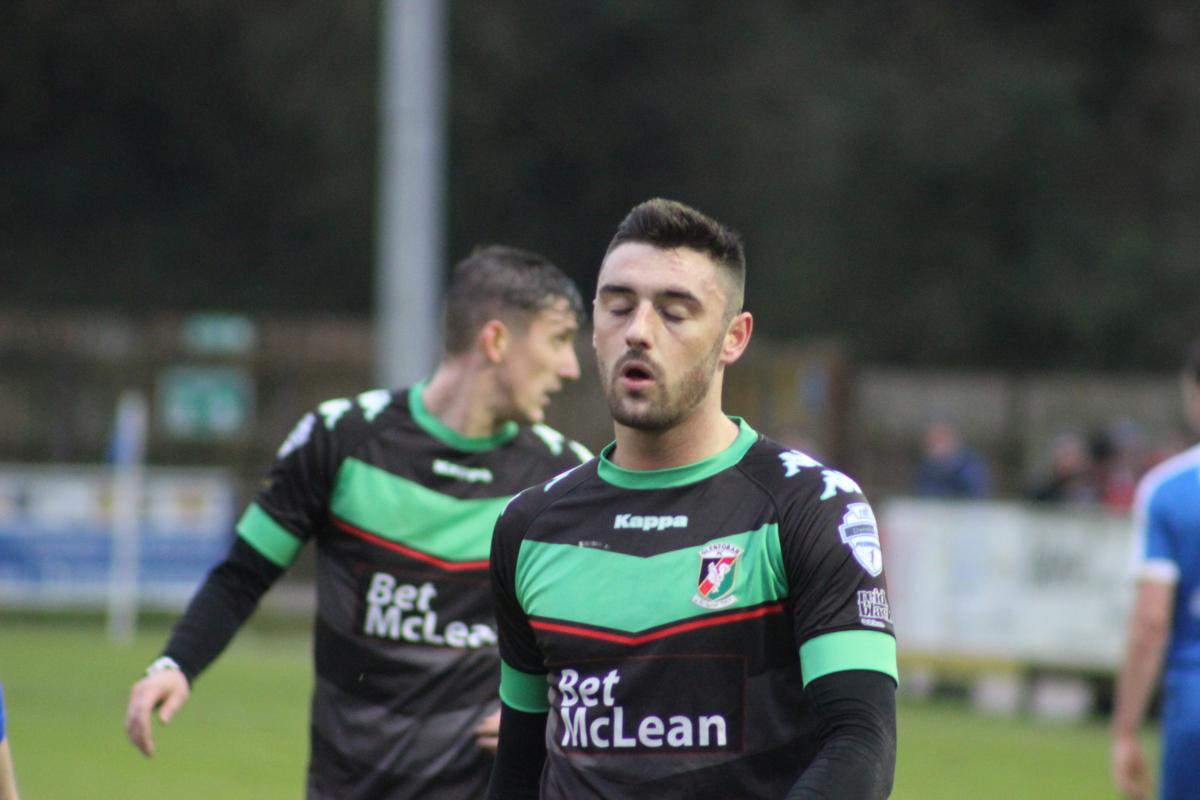 Glentoran drew level on 19 minutes. A foul on Davidson gave Knowles the opportunity to deliver a free kick into the danger area. The Mallards keeper was hesitant and missed the ball completely, allowing the inrushing Allen to fire home his 10th of the season. 5 minutes later another Knowles set piece almost brought another goal however Jonny Addis saw his glancing header go straight into the arms of a relieved Richard Brush. Just after the half hour mark a corner for the home side almost brought another goal. The ball broke to skipper James McKenna but his shot was deflected up and over the crossbar. Ballinamallard United were on top at this stage and had another opportunity to go in front when Willie Garrett fouled Shane McGinty just inside the area. Referee Evan Boyce awarded the penalty and Ryan Curran duly dispatched it past Morris. A superb double save by Elliott Morris prevented the Glens being 3-1 down at the break. Dylan Davidson conceded a needless free kick and Sean Noble's 25 yard effort was tipped onto the crossbar by Glentoran's veteran keeper. Packie Mailey followed up but again Morris was in the right place to make a crucial stop. 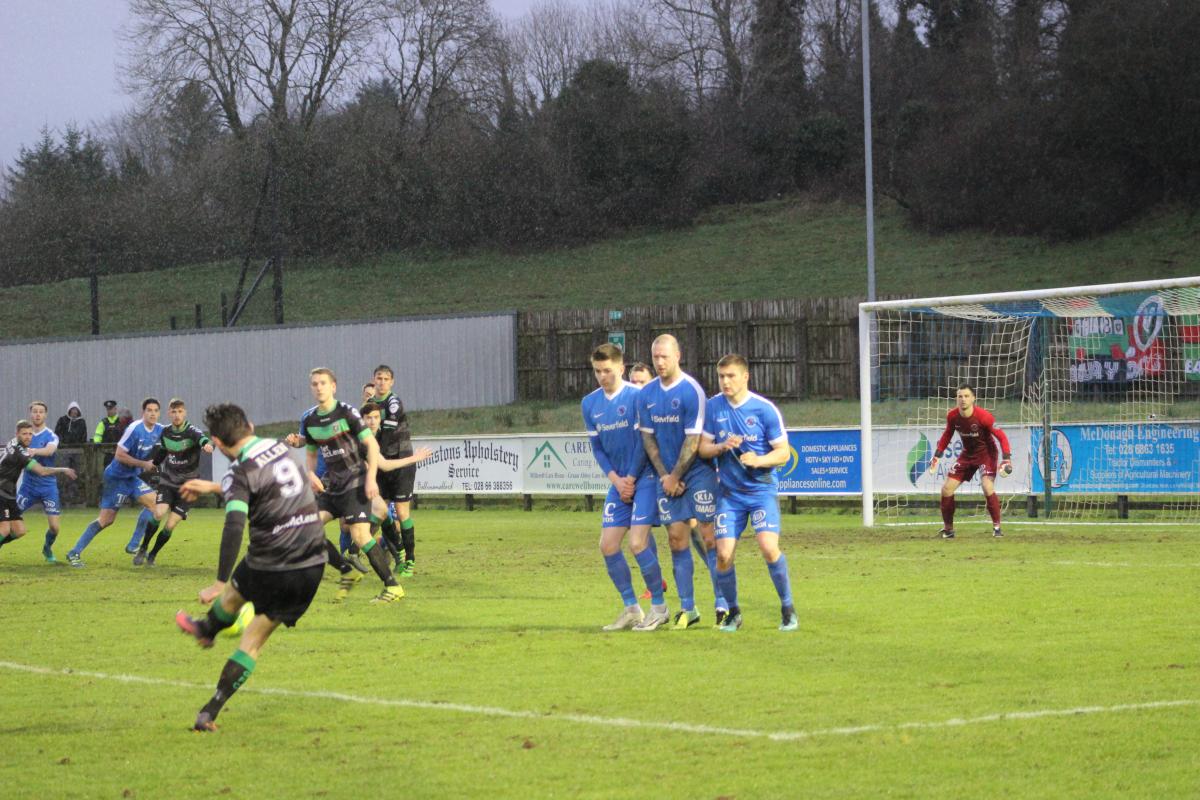 The first real chance of the second half came when Addis found Davidson on the left. The young midfielder put in a superb cross to the back post but Curtis Allen saw it late and couldn't react to get a decent strike on goal. The Mallards then enjoyed a spell of possession and pressure and really should have put the game to bed. A long ball into the area wasn't dealt with and Garrett and Morris were relieved to concede a corner. On 62 minutes a free kick for the home side went into the box and with no Glens player taking responsibility, Curran had a free header which he put wide. Following an injury to referee Boyce and his subsequent replacement by Andrew Davey, Ballinamallard Utd missed a great opportunity to win the game. A ball from the right found Stephen O'Flynn unmarked and just 3 yards from goal. The journeyman mishit the ball though and Elliott Morris reacted quickly enough to keep it out. Whilst O'Flynn claimed it was over the line, the officials thought otherwise. Ballinamallard may consider the decision controversial but the bottom line is O'Flynn should have buried the chance. It was his 'Ronnie Rosenthal' moment and a miss he will no doubt be forced to relive on YouTube for the rest of his career and beyond. 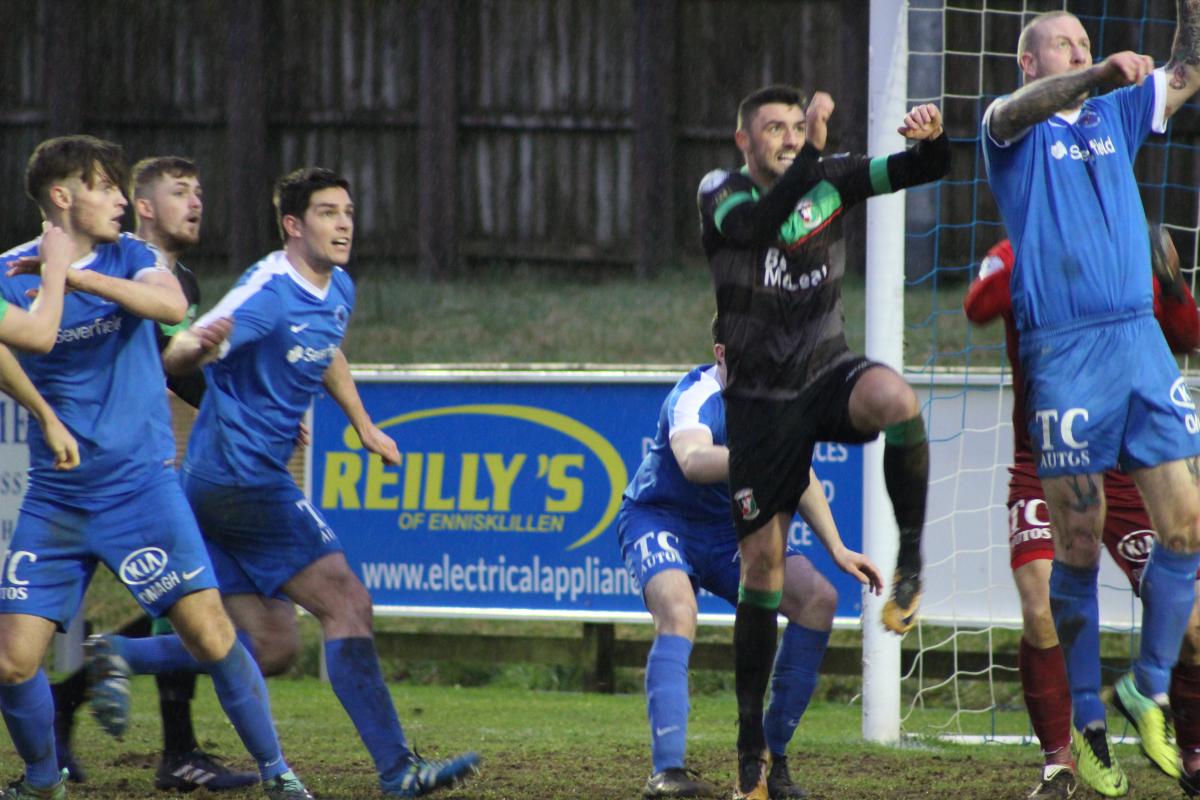 McGinty and Noble both went close to securing the points whilst at the other end, Dan Kelly, Curtis Allen and John McGuigan all had chances to score. In the 90th minute a foul on James Knowles gave the Glens another opportunity to put the ball into the danger zone. Knowles' delivery was again superb but was missed by 3 Glentoran players, each of who had the goal at their mercy. Just when it looked like it was going to be a defeat for Glentoran they were handed one more chance when Jonny Addis was felled on the edge of the box. Allen, who had an earlier free kick blocked handed responsibility to Knowles and his low drive beat the wall and found the bottom corner. The Glentoran fans still had to endure a couple of late corners and then in the final minute of stoppage time it was Elliott Morris again to the rescue, tipping David Kee's shot over the bar.