When the two sides met earlier in the season at Ferney Park it was scoreless at the interval with Glentoran then going on to out-score the home side in the second half by 3 goal. Today we had a repeat, although instead of a 4-1 win, on this occasion it was 3-0.

Glentoran had the better of a dull first half with Jordan Stewart, Fra McCaffrey and Danny McKee having the best of the early chances. Stewart almost opened the scoring on 20 minutes but his 20 yard effort was turned around the post for a corner by Alvin Rouse. The corner was met by Jay Magee and then Johnny Addis, the latter seeing his header beat Rouse but headed off the line by Jason McCartney. Jim O'Hanlon went on one of his trademark mazy runs midway through the first half but his final touch let him down with McCaffrey and Stewart available in the danger area. Just before the half hour mark the game was halted when Jay Magee picked up a head injury. 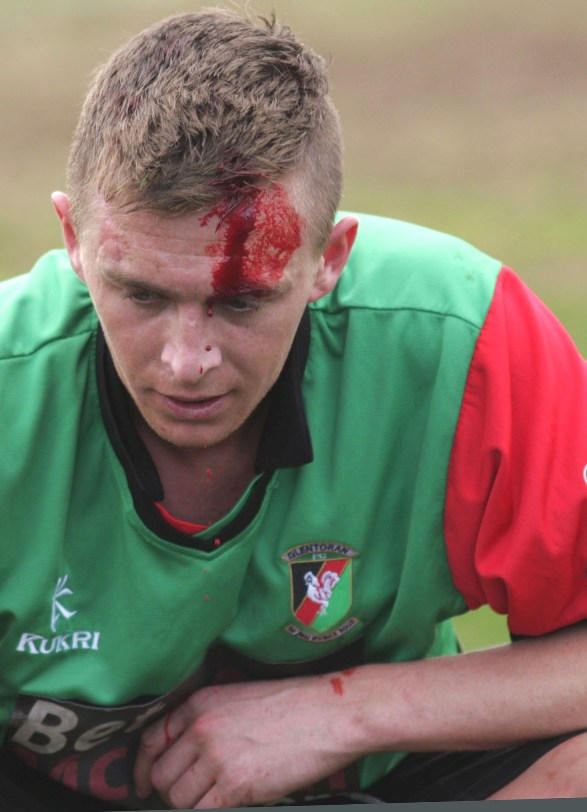 After some lengthy treatment from George Magill he was able to continue. On 33 minutes Fra McCaffrey created an opportunity for Danny McKee. The young striker beat Rouse but was unlucky to see his shot come off the post and get hacked clear. 5 minutes later O'Hanlon squandered a great opportunity to put the Glens in front, volleying over the crossbar after more great work by Stewart. In first half stoppage time McCaffrey got on the end of a set piece but again Rouse denied him.

On 51 minutes McCaffrey drifted past a couple of players before finding Jordan Stewart. Stewart tried to find the top corner but his curling effort was well saved by Alvin Rouse. Jim O'Hanlon and Jordan Stewart had further opportunities but it was Stephen McAlorum who almost broke the deadlock on 70 minutes. Put through on goal by Niall Henderson, McAlorum fired a shot across goal. it looked destined for the bottom corner but Rouse got down to make a superb save. 16 minutes from time the Glens finally got their noses in front. Henderson went down the right and cut the ball back for McCaffrey. His initial shot was blocked but the ball broke for substitute Curtis Allen in the 6-yard box. Allen, with his back to goal, turned and thumped it past Rouse. 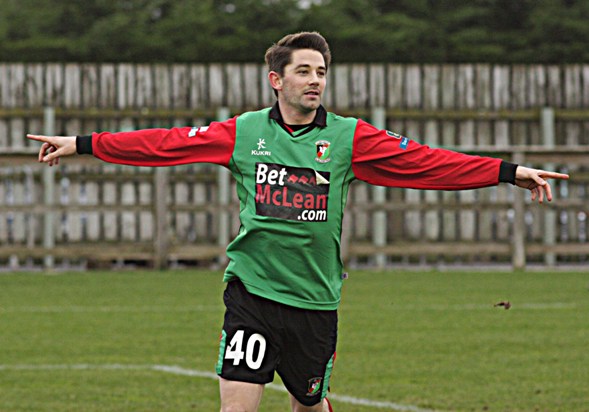 On 77 minutes it should have been 2-nil. Stephen McAlorum's free kick found Johnny Addis in the danger area. His downward header bounced up and over the bar though. Jordan Stewart and Curtis Allen had further opportunities to increase Glentoran's lead before Fra McCaffrey secured the points with a rather fortunate second. Glentoran were awarded a free-kick out near the left touchline, 30 yards from goal. McAlorum took it short to McCaffrey who swung the ball into the box where both Allen and Steve Feeney missed it. They did distract Rouse though and the ball hit the inside of the far post and went into the net. In added time Niall Henderson, who again gave an excellent performance in the right-back role, played the ball through to Aaron Boyd. He found McCaffrey and as Rouse rushed from his goal McCaffrey calmly slid the ball past him to make the final score 3-nil. 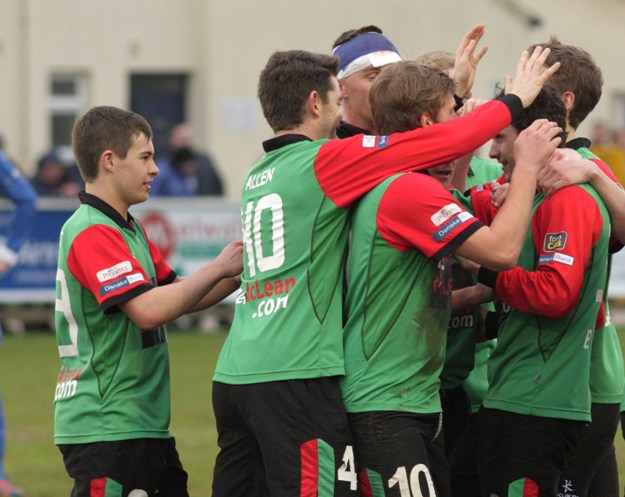