Steven Gordon's red card proved to be the turning point as Glentoran slipped to ninth place in the Danske Bank Premiership. The Glens had probably shaded the first half and certainly had the best of the chances but a moment of madness, as the players left the field at the interval, ultimately cost Glentoran the game.

Whatever the provocation, and Johnny Lafferty certainly played a major role, you cannot lift your hand to an opponent. Referee Raymond Crangle had no option but to dismiss Gordon and whilst many of the visiting players and supporters may feel that both players should have gone, it was Glentoran who had to play the second half with 10 men. 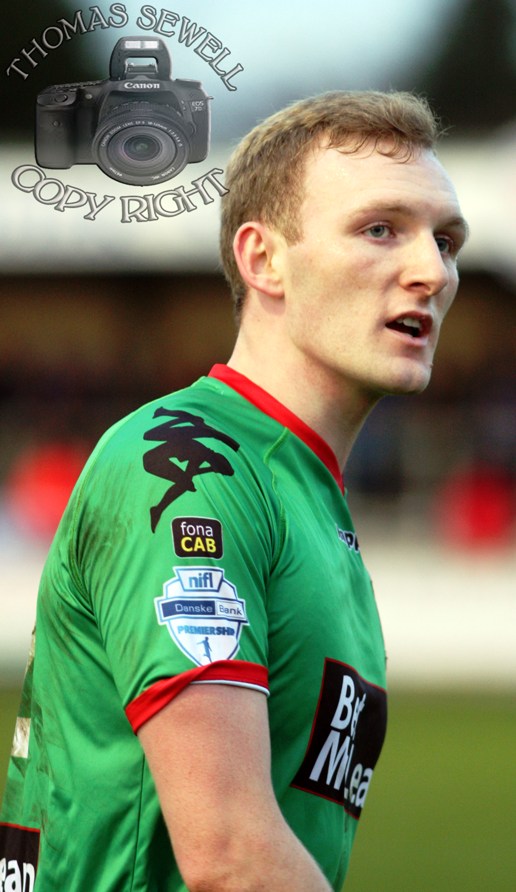 The game took a while to get going and in the first quarter of an hour there were only two efforts on goal, one from each side. The home side were awarded a free kick on 5 minutes but Shane McGinty's effort from the set piece hit the wall. 3 minutes later Curtis Allen crossed from the left. Stephen O'Flynn, statring his first game since the opening day of the season, met it with his head but the ball flashed wide of the upright.

On 16 minutes Glentoran should have gone in front. Aaron Harmon's through ball sent Curtis Allen clear but Cameron Crawford in the home goal denied the Glentoran number 9, turning the ball away for a corner. Midway through the half the Mallards got another opportunity via another free kick. Jason McCartney took this one but his shot went well wide of the target. On 25 minutes Jonny Addis gave away a needless free kick near the corner flag. The ball was whipped into the danger area, glanced of a Glentoran defender's head and whistled just past the post. A real let off!

28 minutes in and another free kick brought another opportunity, this time for the Glens. Stephen O'Flynn got on the end of it but although his header beat the keeper it was hacked off the line and away to safety. Elliott Morris saved well from Johnny Lafferty on 31 minutes and then a quick free kick from Jonny Addis found Curtis Allen on the edge of the area. Alled controlled the ball and his excellent effort was well saved by Crawford. 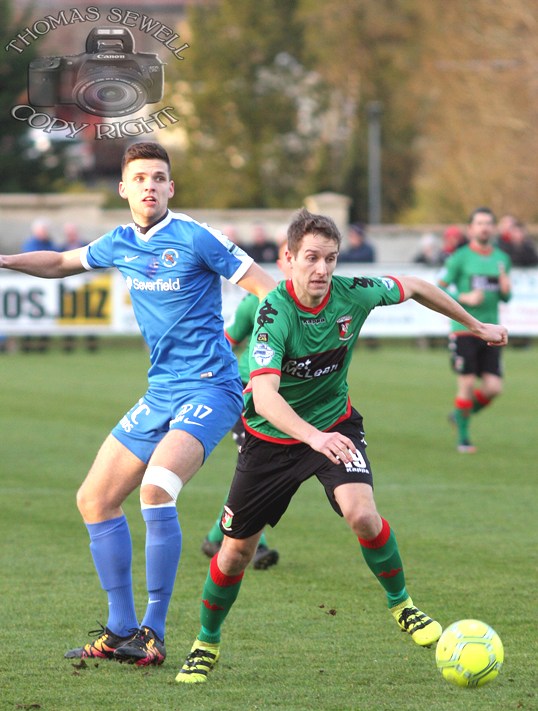 The home fans howled for a penalty on 42 minutes when Jonny Addis made contact with Adam Lecky in the area. The big striker went down very easily and that probably convinced referee Crangle that there was no real offence committed. Right on halftime a great ball from debutant, Ethan Warnock, found Curtis Allen on the edge of the area. Allen fired goalwards but his effort was just too high.

10 man Glentoran came out for the second half knowing that they would have to dig in and fight for a result but just as last week, conceded a goal within 5 minutes of the restart. A poor pass from Chris Lavery gave possession to United. As they closed in on goal Calum Birney was forced to commit a foul near the edge of the box. Shane McCabe took the free kick, rolling the ball to Ryan Mayse and his 20 yard drive took a slight deflection and beat Elliott Morris to give the home side the lead.

Glentoran pushed forward and a long throw from Addis was hooked towards goal by Jay Magee but Crawford saved easily. A couple of minutes later the Mallards doubled their lead. A shot from McGinty was deflected over for a corner. From the set piece the ball broke to substitute Joshua McIlwaine on the edge of the box. He swivelled and smashed the ball into the top right hand corner of the net; an excellent finish!

Just before the hour mark Allen won a free kick 25 yards from goal. He took it himself but his shot was well wide of the left hand post. O'Flynn then chested the ball into Calum Birney's path but again the shot was off target. Glentoran made 3 substitutions to try and change the game. Foley came on for Lavery on 57 minutes and then on 66 minutes Nacho Novo replaced O'Flynn with Ciaran Caldwell replaced McAlorum. The latter two changes perhaps seemed harsh with both skipper McAlorum and striker O'Flynn putting in good, workmanlike performances but with the game looking gone thoughts had maybe turned to the Boxing Day derby.

The last 10 minutes saw Ballinamallard United sit back and invite pressure and it almost cost them. Nacho Novo drove into the area only to be denied by a last ditch challenge and then on 83 minutes the same player beat the Mallards' keeper to the ball but was forced wide of goal and had to settle for winning a corner. That corner was met by Addis but his header flashed wide of the far post. In the 89th minute Eric Foley was fouled 25 yards from goal. He took the free kick short to Jay Magee and his thunderbolt flashed past Crawford to make the score 2-1. Despite continuing to press forward in added time, Glentoran failed to find an equalizer.

A disappointing and perhaps unavoidable defeat which made it just one league win in the last seven games for Glentoran! The result was even more disappointing given that the team just above us, Dungannon Swifts, also lost and so an opportunity to close the gap to just a point was missed. Next up is the Boxing Day meeting, away to Linfield. The performance levels certainly need raised! 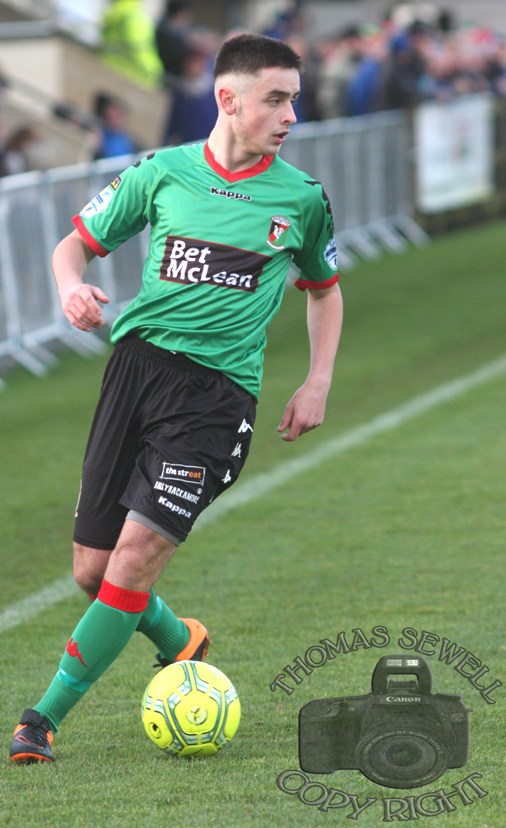 Footnote: At 15 years and 306 days, Ethan Warnock is the youngest outfield player ever for Glentoran.

The overall record (15 years and 220 days) is held by goalkeeper, Wayne Drummond.