The latest of Brian McClelland's compelling series of articles on significant figures from Glentoran's history. Many thanks to the Glentoran Supporters Committee (1923) for use of this material.

Was this their finest hour (and a half)?

I had a great trip to Wembley Stadium not long ago, with my three sons, Gavin, Michael and Philip.  We were thrilled to witness our beloved Tottenham Hotspur beat one of the Spanish Galacticos, Real Madrid, by three goals to one.   Spurs recent 2-2 draw with Juventus in Turin brought back memories of Glentoran’s famous game against the Italian giants in the European Cup.   I’m sure my boys are fed up hearing my stories about that famous night in October 1977, but I never tire of repeating how I witnessed the Wee Glens take on the mighty Juventus, and give them the fright of their pampered lives.

Glentoran’s history in European competition is punctuated with glamour games and wonderful performances.  The matches against Benfica, Glasgow Rangers, Arsenal and CSKA Sofia stand out in the memory. In terms of technique, skill and drama, however, the game against Juventus was, unquestionably, one of the greatest performances by an Irish League club.

Glentoran won the right to face Juventus in the European Cup by deposing of Iceland champions, Valur.  In a disappointing first leg at Reykjavik, Glentoran lost 0-1.  A crown of 7,000 watched the second leg at the Oval, when goals by Johnny Jamison and Alex Robson clinched a place in the second round and a tie with the Italian champions. 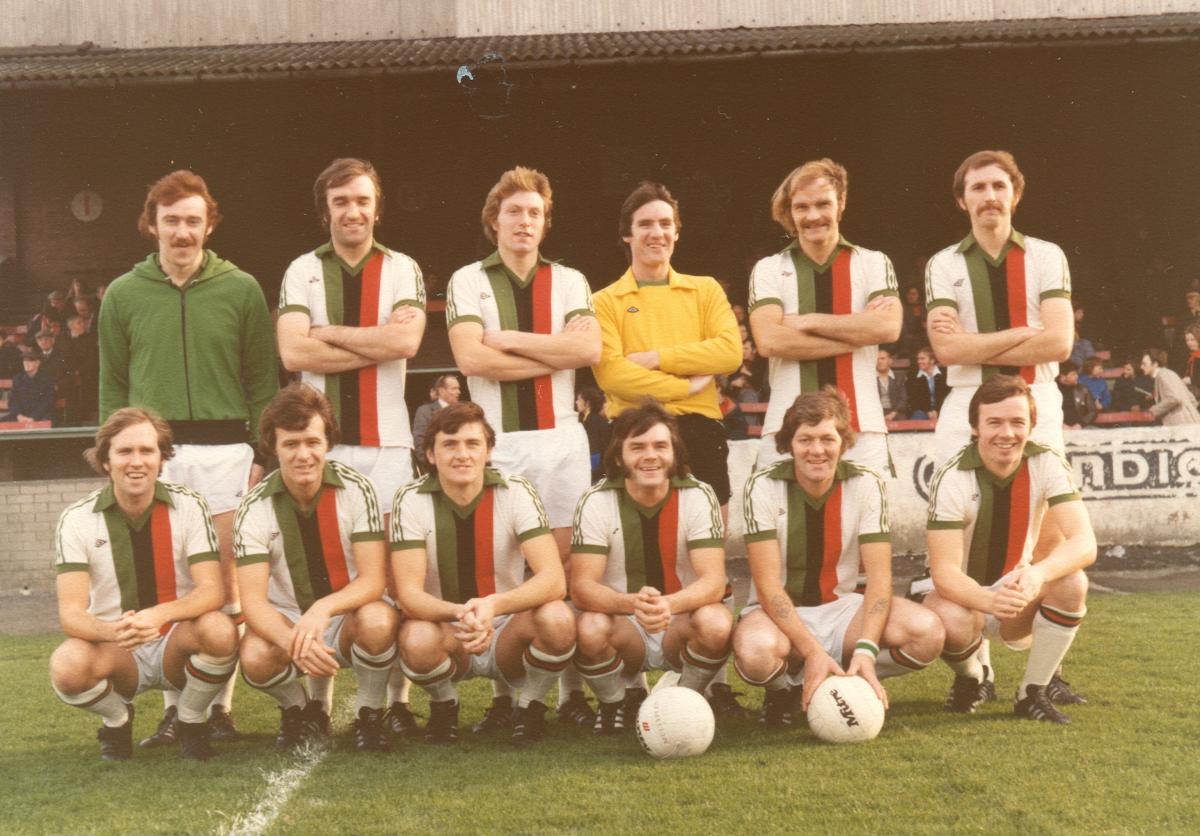 The Glens team the week before the home Juventus leg

Juventus were strongly fancied to win the European Cup that season.  Their experienced team was to form the nucleus of Italy’s World Cup squad for Argentina in 1978.  Indeed, five of their team, veteran goalkeeper Dino Zoff, Sciria, Gentile, Cabrini and Tardelli played in the Italian team which won the 1982 World Cup in Spain by defeating West Germany 3-1 in the final.  Furthermore, Boninsegna, that most elegant of forwards, had scored for Italy in the 1970 World Cup Final against Brazil in Mexico City.

In the 1976-77 season Juventus had eliminated Manchester City and Manchester United from the UEFA Cup and had defeated Atletico Bilbao in the final.  In the same season, Enzo Bearzot, the Italian manager, had used a team containing seven member of the Juventus side to defeat England 2-0 in a World Cup qualifying game in Rome.

Thus, more than a touch of romance was brought to the European Cup when the Italians took their multi-million pound team to Belfast to play the part-timers of Glentoran in September, 1977.

A crown of around 25,000 watched enthralled as a physical chess game unfolded before them.  Juventus slipped into top gear from the start and Glentoran matched them move for intricate move.  Raking cross field passes were mixed with fine wing play, lightning bursts down the middle brought deadly shooting as the pace of the game pushed Glentoran players to new heights of endeavour. 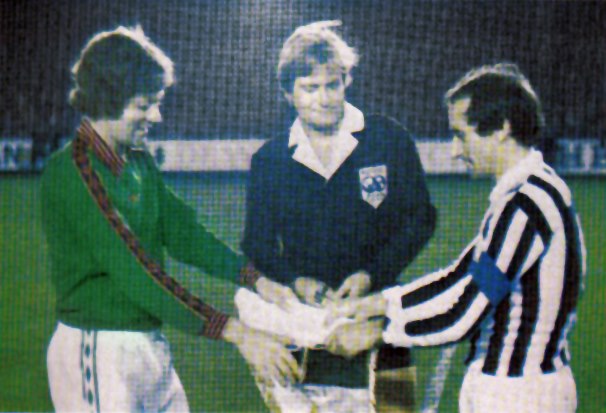 With 38 minutes on the clock Juventus scored through Franco Causio, a seasoned international with 28 caps to his credit.  Causio, a dapper little player, could beat an opponent with the ease of a Stanley Matthews, and shoot with the power and accuracy of a Bobby Charlton.  Gentile crossed the ball into the goalmouth, Tardelli headed it on for Causio to supply the finishing touch with imperious nonchalance.

The Glens were now torn between all out attack or retaining enough discipline to stop the master Italian artists from painting them out of the picture by scoring again.  Fascinating personal duels were developing as players became locked in their mutual respect.  Alex Robson, Rab McCreery and Billy Caskey showed renowned Italian hard men, Morini, Benetti and Gentile that, not only could they be as powerful in the tackle, they could also play with creativity.

A few minutes before half-time Johnny Jamison, whose immaculate passing had been opening up the Italian defence, struck the underside of the crossbar with an angled shot.  “I saw the ball go over Zoff’s head.  I knew he was beat but my heard sank, I wanted to sit down and cry when it came out,” Jamison commented afterwards.

The tempo of the game did not slacken in the second period as the Glens pressed for that elusive equaliser.  With five minutes remaining a fairytale draw was on the cards.  The Glens were awarded a penalty when player manager Arthur Stewart’s chip struck Morini on the arm.  Up stepped Warren Feeney to take the vital kick, but Zoff, diving to his left, blocked the shot for a defender to knock the ball for a corner.  What a time to miss your first penalty for Glentoran!

The final whistle acted as an oval heartbreaker.  Juventus had held on to their slender lead, but recognized that they had been involved in an epic contest:  “Che culo!” (what luck) exclaimed relieved Juve coach Giovanni Trapattoni who was later to become manager of the Republic of Ireland.

Despite their defeat Glentoran emerged from the game with much credit for their display of skill and determination against the superstars of Juventus.  They had put up a helluva fight, but it is not often that David slays Goliath, unless in the bible.

Inevitably, perhaps, Glentoran could not maintain their form in the second leg going down 5-0 at Turin’s Stade Communade.  Hero of the hour was goalkeeper Denis Matthews whose brilliance kept the score to reasonable proportions.  Juventus had survived a mugging from the street smart journeymen of east Belfast, but in their home town, before 35,000 excited Italian fans, the boot was on the other foot, so to speak. 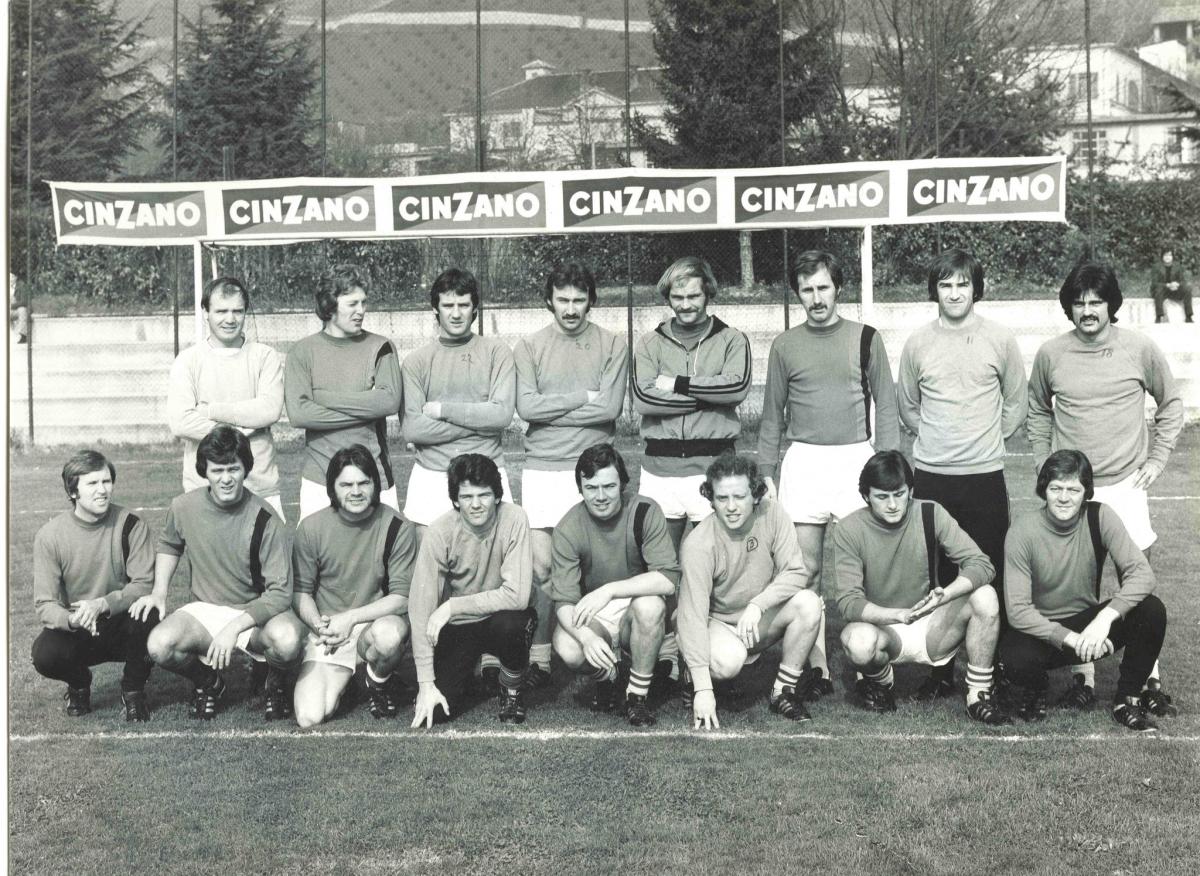 The Glens squad in training in Turin before the second leg 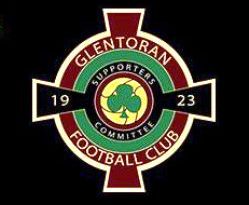