At our recent (well, it doesn’t seem that recent) home match with Cliftonville, Glens goalkeeper Elliott Morris passed a remarkable milestone with the club when he became the longest serving first team player in the club’s history. On that date, Elliott had been a first team player for 17 years, 7 months and 23 years to date. That bypassed his long-term teammate Colin Nixon’s tenure of 17 years, 6 months and 20 days. Nicky remains the player with most first team appearances, with 794 compared to Elliott’s 739 and counting, but it’s hard to see this level of longevity ever surpassed at this level of football. Congratulations Elliott from everyone at Glentoran.

Elliott joined the club from West Bromwich Albion and made his debut in a 4-1 home league win over Institute on 10 August 2002. Also making their debuts that day were Andy Kilmartin, Kevin Keegan, and a certain Michael O’Neill who scored one of our goals (the others coming from Michael Halliday and Darren Fitzgerald with two). Other Glentoran legend in the team that day included Colin Nixon, Chris Walker, Paul Leeman, and Darren Lockhart. 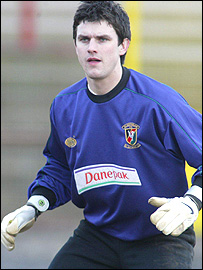 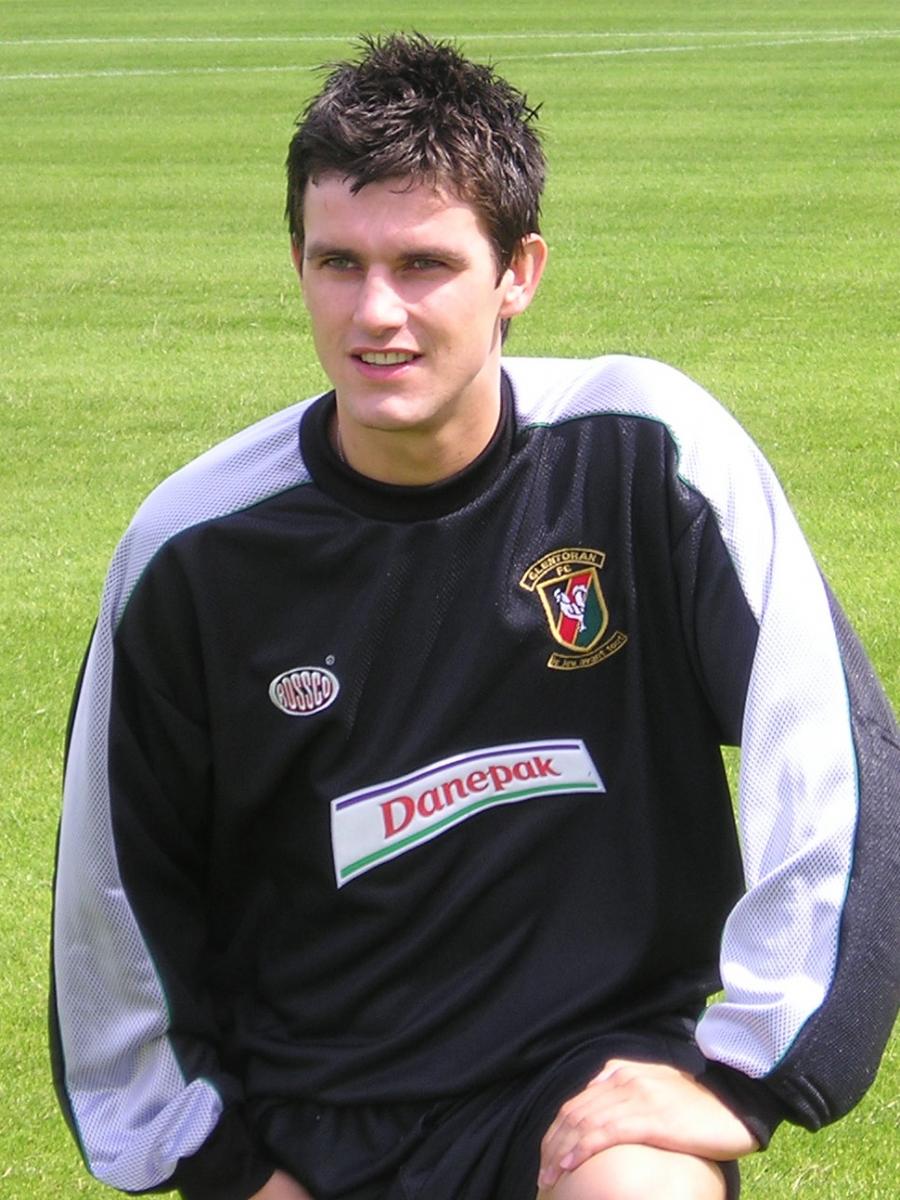 Elliott in his early years at Glentoran

Elliott spoke to Glentoran.com about this latest landmark in a great career.

“Glentoran means everything to me and I love the club. People say I stuck by the club during difficult years. Yes, there were times I definitely had opportunities to join other clubs, but I never lost sight of the fact that the club and supporters have also stuck by me during difficult times or when I was out of form. That means everything and it’s a two-way street. It’s great to have reached this milestone and I’m really proud to be the club’s longest serving first teamer. I don’t know if I’ll get to Colin’s appearance record but I’m glad we both hold a record like this as Colin did so much at the club over the years.

I know we’ve had a tough last few years at the club but I’m really buzzing over how it looks like the good times are coming back and hopefully we still have an Irish Cup semi final to look forward to. The Cup Finals are always very special at Glentoran, so I definitely want to be involved in more of them, starting this season.

I was very proud when I was made captain a few years ago and I only gave it up when I went to Eddie and said I thought he should give it to an outfield player might help give us a lift. To be honest I regretted that afterwards but now we’ve got a captain in Moko who carries a lot of authority about the club. He isn’t a shouter on the pitch but when he speaks in the changing room the players listen and take heed of him. Mackers was the same when he took over from me.

The supporters at the Glens have been fantastic with me throughout, especially when they worked so hard for my Benefit year. So, all I want is for us to give them something back once we get back to playing.” 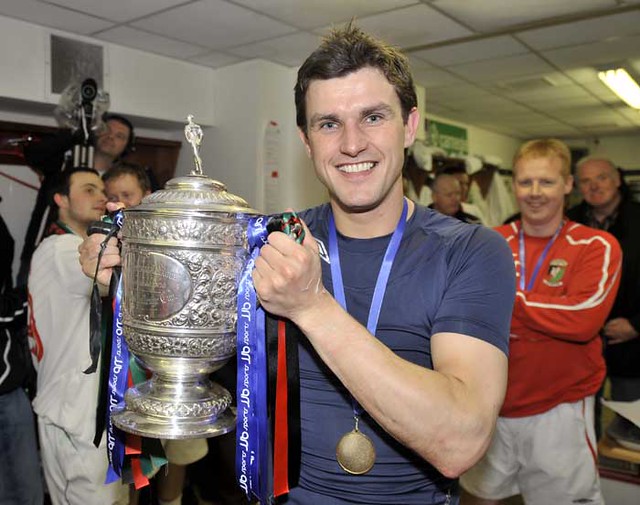 Elliott with the Gibson Cup in 2009

Roy Coyle signed Elliott in 20112 and together they won 2 League Championships, an Irish Cup, 2 League Cups and the County Antrim Shield. Roy said of Elliott: “Before I signed Elliott from West Brom, I did my homework on him as I didn’t know much about him at the time. Apparently, they let him go because they reckoned he was too short. Glentoran can be very glad they thought that because he’s become an absolute legend at the club. He’s a model professional who even hates losing goal in training. I played with a great keeper at the Oval (Albert Finlay) and I signed a great one for Linfield (George Dunlop) and the highest praise I can give Elliott is to say he is at their level. In fact, I rank him among the best signings I ever made as a manager. We brought Elliott in as first choice as a very young player, which isn’t easy as goalkeeper is the position on the pitch that gets most attention and criticism, so it carries a lot of pressure. But Elliott had picked up very good habits at West Brom and he’s always maintained them at the Oval. That’s why from the very start he played a major role for us when we were winning championships and cups in his first few years here. In general, Elliott’s attitude around the club makes him a dream to manage and I know he has so much left to offer here.”

Eddie Patterson made Elliott captain of Glentoran in 2013. Together they won 2 Irish Cups. He said of his time with Elliott: “Elliott Morris is a Glentoran man through and through. I saw what the club meant to him in my first full season in charge at Glentoran in 2012/13. That was probably the toughest of all seasons in Glentoran’s history with players going unpaid for long spells during the season. Elliot as one of the senior pros at the club , didn’t miss a single training session and joined me and backed me during this very difficult period in trying to keep the players giving their all for the shirt on the training ground and on the park. That led me to make him captain in Nicky’s absence on the park and then making him captain the following season when Nicky moved on. This was an example to the younger and new players at the club. In the three and a half years I was at the club I never had a bad word from him and his professionalism and dedication to Glentoran football club is well appreciated by all Glentoran supporters. Oh, and I forgot to mention...I think being one of the best goalkeepers in the Irish league for many seasons plays a part in that appreciation from the fans, myself and the other managers past and present that he played under”. 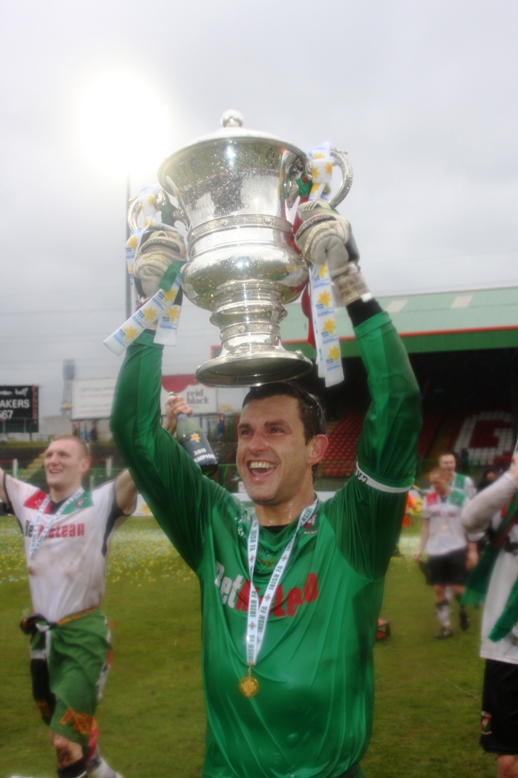 Current boss Mick McDermott: “Elliott’s career has been immense; to achieve 739 appearances at 1 club spanning 18 seasons is almost unheard of in world football. Certainly, in the modern era. I am delighted to have him as a player and as a member of my coaching staff - he is a massive asset in the changing room and on the pitch. He will continue playing as long as he feels ready to do so and I know he has a bright coaching career ahead of him.

Glentoran Chairman Stephen Henderson: “In discussions on sporting greatness, fans often categorise players as heroes or legends, their achievements and deeds woven into the rich stories of the club’s history. Yet once every few generations, if you’re lucky, someone breaks through even this ceiling and reaches the status of an icon. Someone whose story is told across multiple chapters of the club’s history. Elliott Morris rests comfortably in this category. A hugely talented goalkeeper and a modest, decent and loyal human being. His longevity with Glentoran has witnessed many highs, but also the lows. It was JRR Tolkien that said, “Faithless is he who says farewell when the road darkens”.  Elliott kept the faith, stayed loyal and performed to the best of his ability week in, week out over so many seasons, keeping the faith when so many others said farewell. It is fitting that the mantle of our longest serving player ever, should rest with him”.

Congratulations Elliott. You’re one of this club’s true all-time greats. We’re proud to have watched you over the past 18 years and here’s to extending that record a lot further!