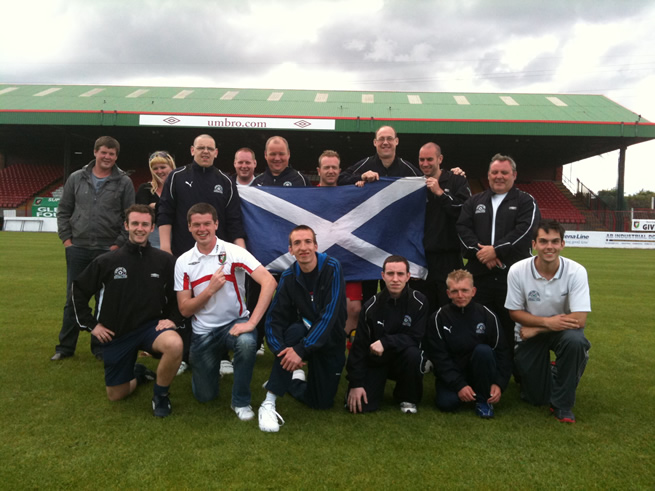 Players, Coaches and Volunteers from Stirling Stirling City Allstars – a Scottish Football Club for Footballers with Disabilities – visiting the Oval on Thursday 16th June 2011 as part of a recent trip to Northern Ireland

Stirling City Allstars – a Scottish Football Club for Footballers with Disabilities – visited the Oval on Thursday 16th June 2011 as part of a recent trip to Northern Ireland.

The Scottish club was visiting Northern Ireland to compete in the IFA's Coca-Cola Community Cup alongside fifty-four other teams from across the UK and Ireland at the Billy Neill Complex in Dundonald.

The 5-a-side disability football event is for clubs and adult centres which have Learning and/or Physical Disability Football Programmes.

Alban Dickson, Club Chairperson said: “The visit to the Oval was a great way to reward our players after a fantastic performance in our first overseas tournament.

“The visit was the focal point of our trip and it was a great experience for the players and volunteers to receive a guided tour of one of Northern Ireland’s most famous football stadiums.

“We got the chance to walk around the pitch before seeing inside the dressing rooms, board room and club shop.

“I think Glentoran might have earned themselves a few extra supporters as after our visit to the club shop I don’t think a single player or coach returned to Scotland without a Glentoran football shirt or souvenir.”