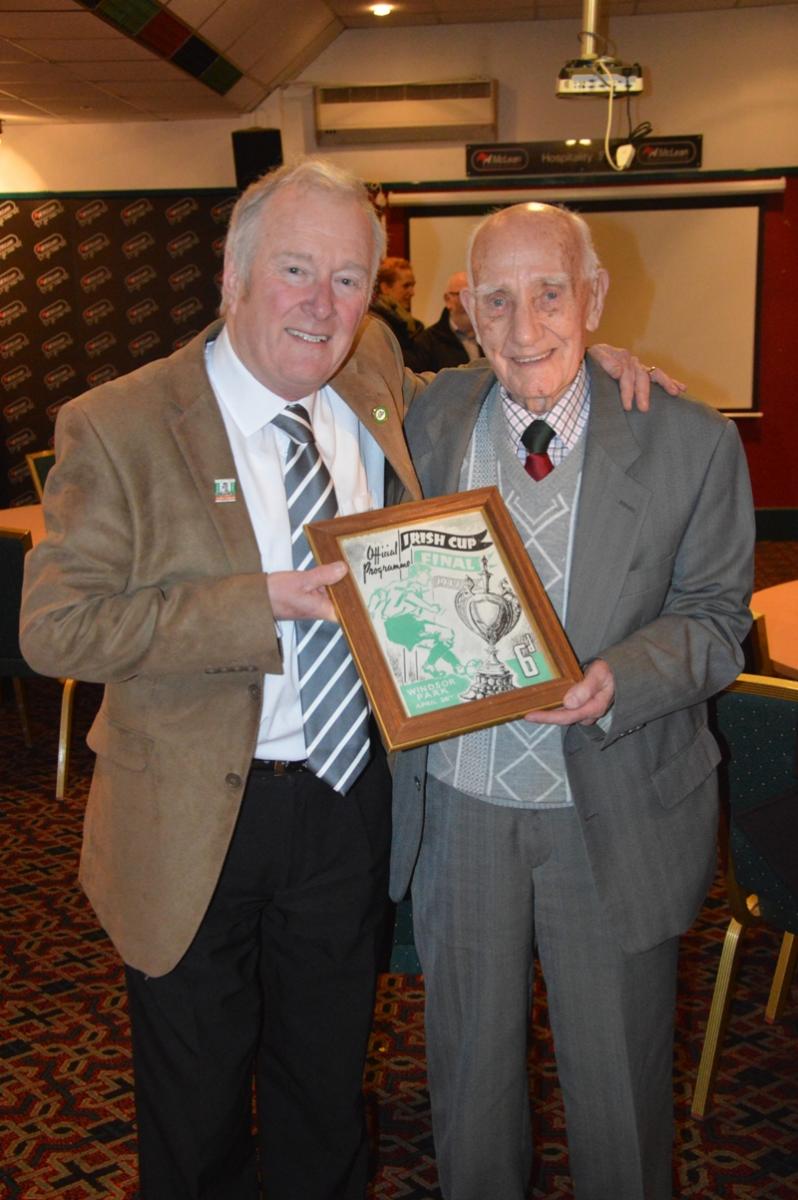 BBC journalist, Padraig Coyle, was covering Glentoran’s home game against Warrenpoint Town back in December 2013. Having just come through the Directors’ entrance, Padraig stopped to read Thomas Pearson’s citation in the hallway (Pearson was a Glentoran goalkeeper, killed in North Africa during WWII and was awarded the Military Medal).

Padraig Coyle is a journalist but also a historian and later that afternoon when discussing Pearson with John Moore, Coyle also touched on his interest in Belfast Celtic and asked if Glentoran would be interested in meeting up in some way. The seed was sown and in February Padraig attended a GSC (1923) club meeting along with Martin Flynn to discuss what the two groups could do together. On Wednesday 5th March, Padraig Coyle and members of the Belfast Celtic Society were hosted by the Glentoran Supporters Committee (1923) in the McLean’s Suite at the Oval. There were 36 in attendance at the event and several other clubs were represented including Coleraine, Distillery and Portadown.

Martin Flynn from the BCS brought along some memorabilia from the Belfast Celtic museum (situated in the Park Centre), including the ‘old’ Irish Cup. The Gold Cup, won first by Belfast Celtic in 1912 and for the final time by Glentoran in 2001 was also on display. Also amongst the items on view was a framed copy of the team line ups from the 1947 Irish Cup final when Belfast Celtic defeated Glentoran 1-nil with a goal from Charlie Tully. In the Glentoran side that day was Bertie Wright and the 94 year old was also a guest on the night. 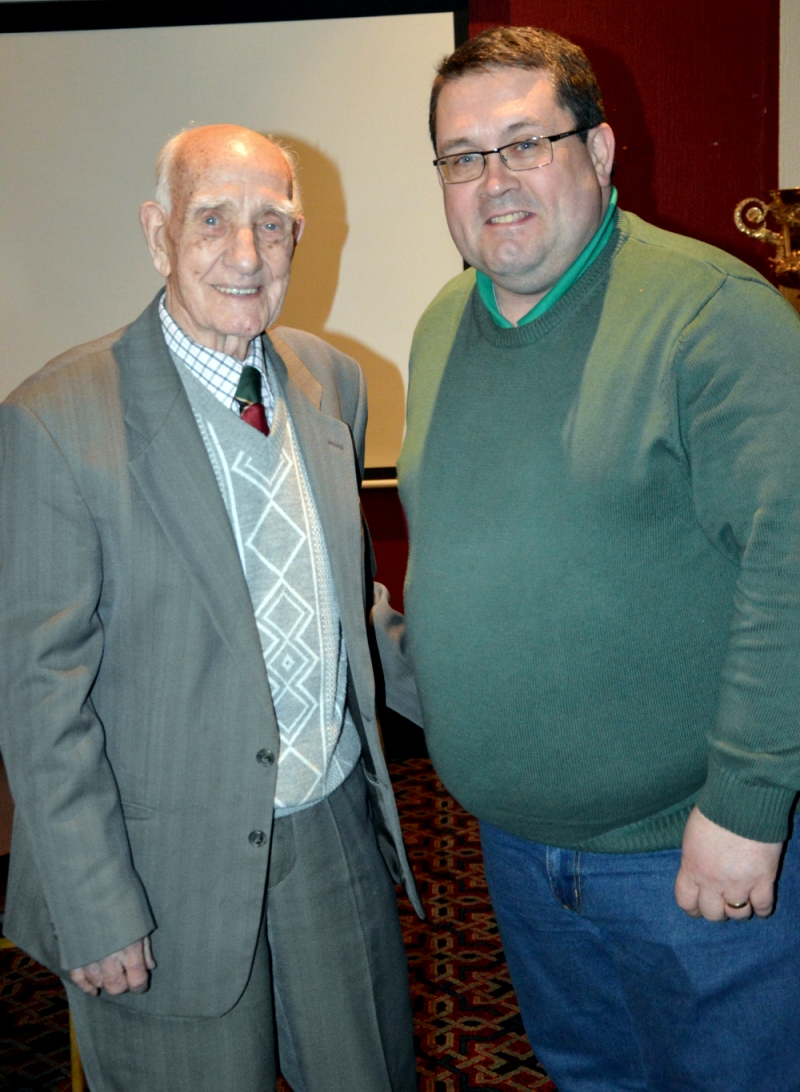 Sitting around talking about football is something most of us love to do. Throw in a fish supper from Spence’s and some tea, bread & butter and you really do have the makings of a great evening. The event kicked off with a welcome from Glentoran (John Moore) and GSC (1923) Chairman, Philip Stevenson. Padraig Coyle then spoke about Belfast Celtic and Charlie Tully’s son (Charlie jnr) also recounted some stories of his father’s playing career. Bertie Wright then held court talking about his time in the game from the late 30’s through to the late 40’s and also spoke of his memories of playing against Belfast Celtic and some of their great players and characters. 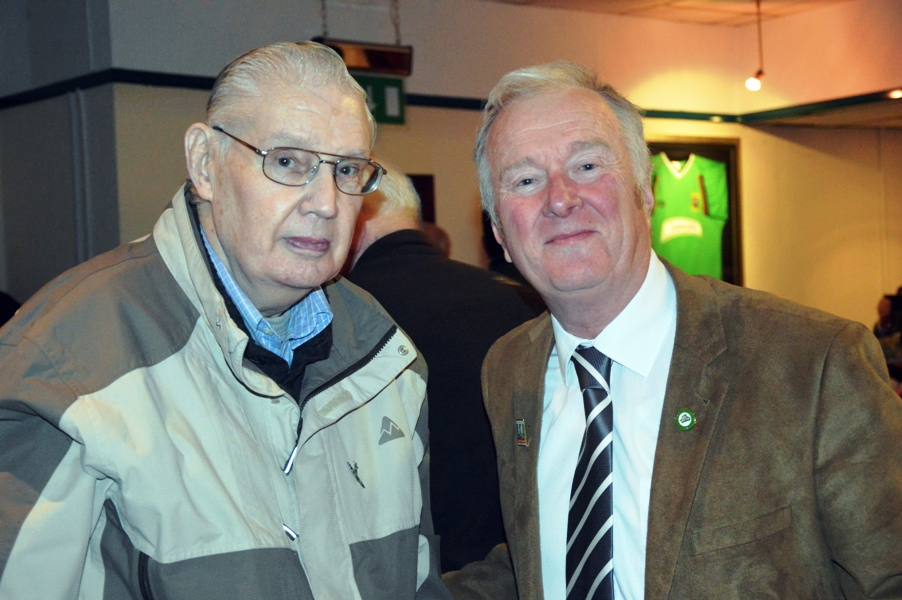 The audience, including former GSC (1923) member, 80 year old Jim Midgely (a Belfast Celtic fan in his youth) then discussed football in Northern Ireland and whether it would be feasible for Celtic to return. Brenda Curran was also there. Brenda’s father was Walter Bruce (snr), uncle of one of Glentoran’s most famous players; also called Walter Bruce. The craic was great and it was wonderful to have a room full of people with ages ranging from 17 to 94 enjoying discussing the great game of football.

Belfast Celtic have visited Glentoran and next it will be Glentoran’s turn to visit Belfast Celtic. Plans are underway for a trip to the Society’s museum in the Park Centre. We might give the fish suppers a miss this time but if the night is anything like the first; it’ll be another very enjoyable evening.